Although the vFlyteAir Grumman American Traveler can be flown easy under VFR conditions, flying IFR with the AP gives you a lot more time to look outside, making longer flights and try to keep it a little more relaxing.

On today’s flight I depart from KBFI (Boeing Field) and via the following VOR/DME stations, I end up in Vancouver. The short flight plan is as follows: PAINE (110.60) – PENN COVE (117.20) – VICTORIA (113.70) – VANCOUVER (115.90) we’re approaching Vancouver International Airport (CYVR). I used for this flight VOR beacons with preferable DME information. You could of course also use NDB beacons instead or mixed with VOR, but in this region there’s not really a need to go for NDB beacons. It could happen that you won’t find a ordinary VOR/DME beacon but a VORTAC beacon. VORTAC is a navigational aid for aircraft pilots consisting of a co-located VHF omnidirectional range (VOR) beacon and a tactical air navigation system (TACAN) beacon. Both types of beacons provide pilots azimuth information, but the VOR system is generally used by civil aircraft and the TACAN system by military aircraft (Courtesy of WikipediA).

Anyway, do the normal preparations for the Grumman Traveler, switch ON the GPS and enter the first VOR beacon frequency in the NAV1 window. I left the GPS in view, but I hardly used it except for having a MAP with me. I make it myself easy and takeoff from KBFI runway 31R. Since I’m parked nearby the beginning of this runway, it’s quick and by the way, it’s also the shortest runway and why should I need the much longer runway for just my small Grumman Traveler.

The takeoff goes without any problems and the external view, while climbing to approximately 3000 feet, is quite good. Not too many clouds and when there’s a little too much clouds popping up, there’s always a moment that where you can see something of the ground. At 1500 feet I decide to connect the AP switch, which locks the HDG or VOR and altitude. Since I have entered my first VOR beacon, I select the switch next of the AP switch to NAV 1. Rotate the OBS knob in that way that the needle points in the middle and that you’re flying TO the station. You can see the TO indication as a blue arrow pointing in the direction of the station. With the AP connected and some NMs (Nautical Miles) to go, the DME indication gives you the slant distance to the station and the time you need to reach this station. By the way, for those who aren’t familiar with “slant distance”, slant range is the line-of-sight distance between two points which are not at the same level relative to a specific datum. See also this WikipediA web page. (https://en.wikipedia.org/wiki/Slant_range) 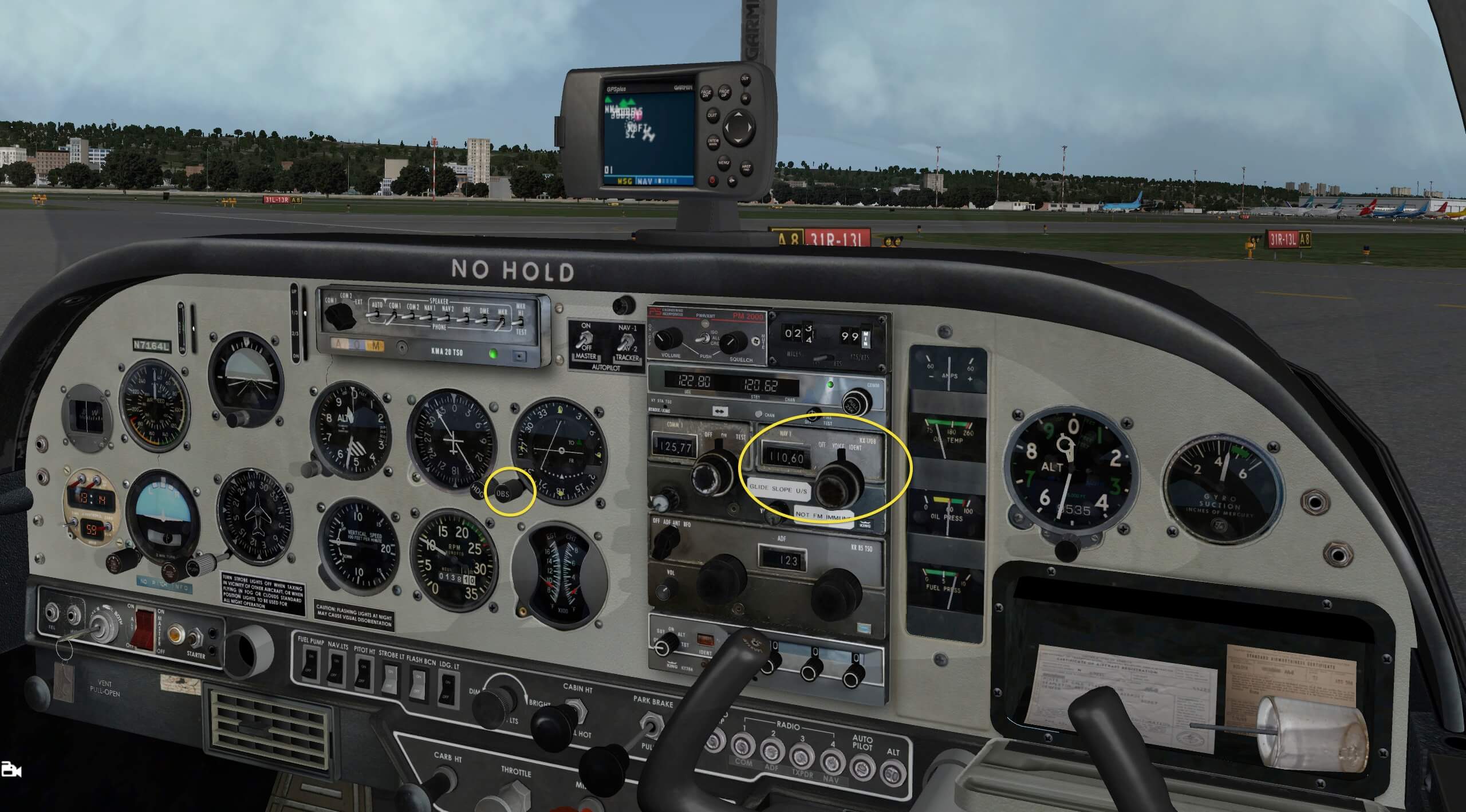 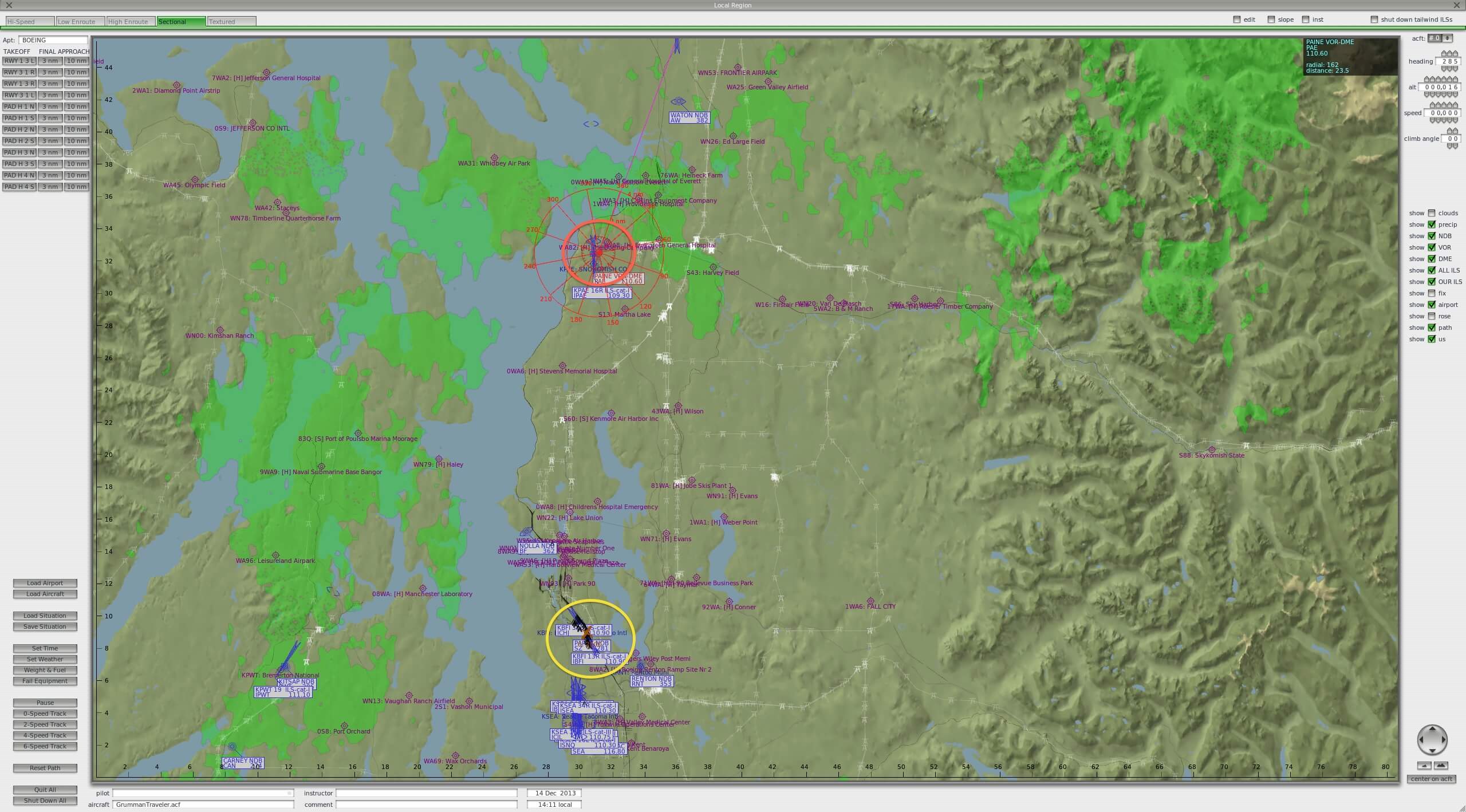 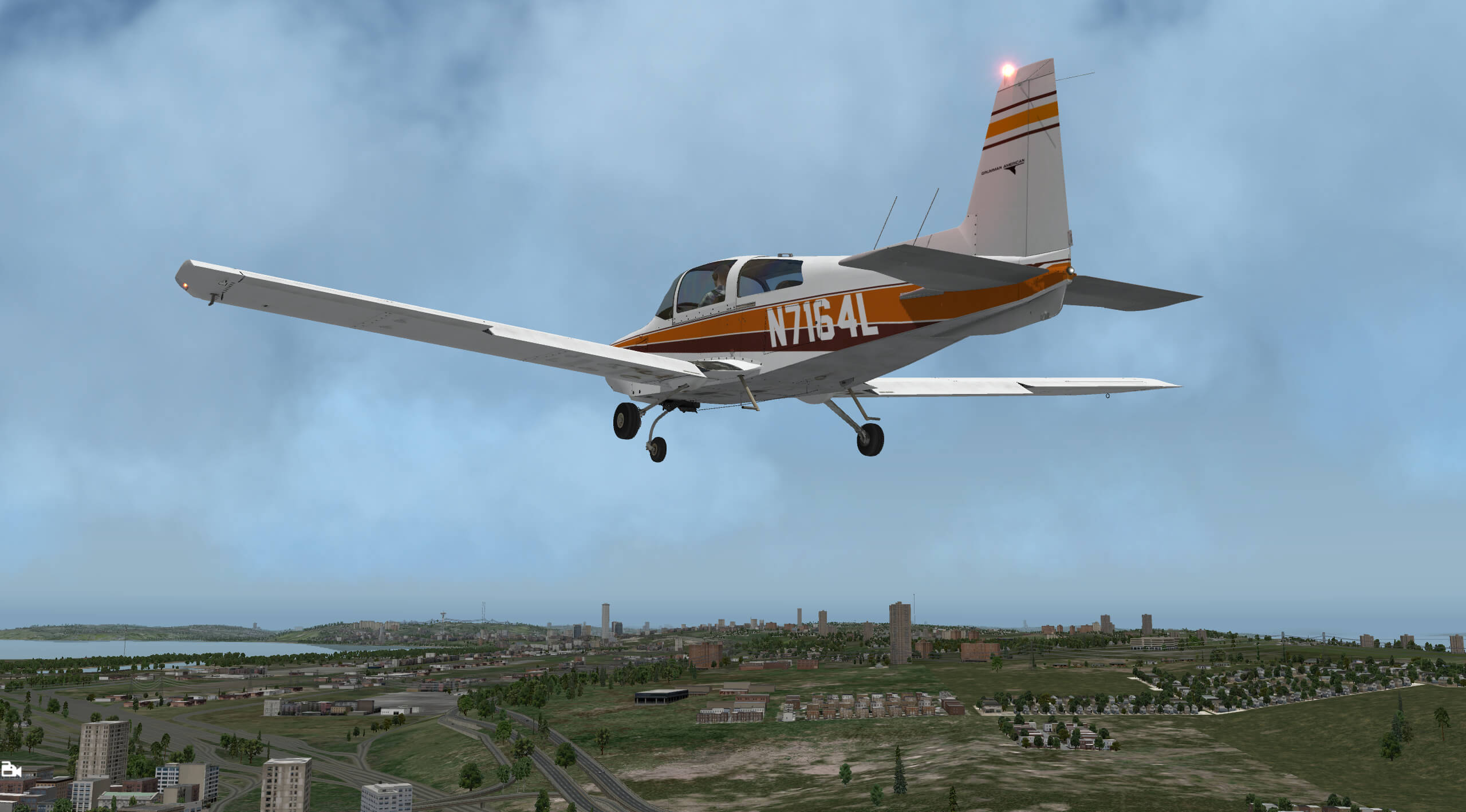 I did already a lot of investigation during my first review of this vFlyteAir Grumman Traveler, but on this flight I’ve got some more time to check every corner of the cockpit. What I’ve seen and found, can be seen on the following screenshots. And again I must say that there’s a lot to see. It’s made with photo-real material which gives the cockpit a realistic look and since the photo-real material is of a high quality too, it’s sharp and it stays sharp while zooming in. All instruments except for the GPS display is sharp and good readable. That said, the GPS window isn’t sharp but blurry. I think, but I could be totally wrong, that this GPS window is using the default XP10 GPS quality. Perhaps I’m totally wrong, sorry about that when this is the case, but when I’m right, then please try to improve the overall quality of the GPS display with the next Service Pack. 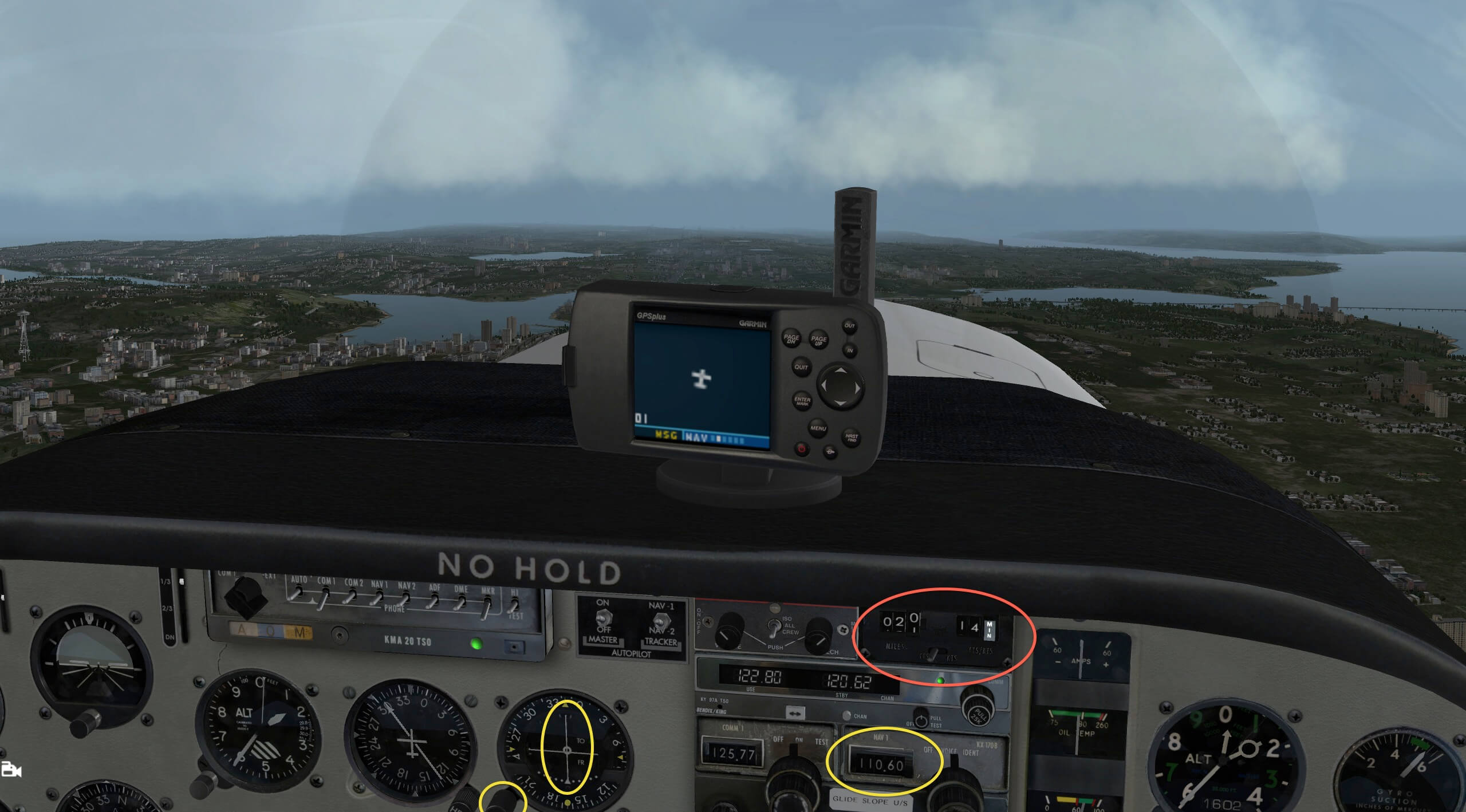 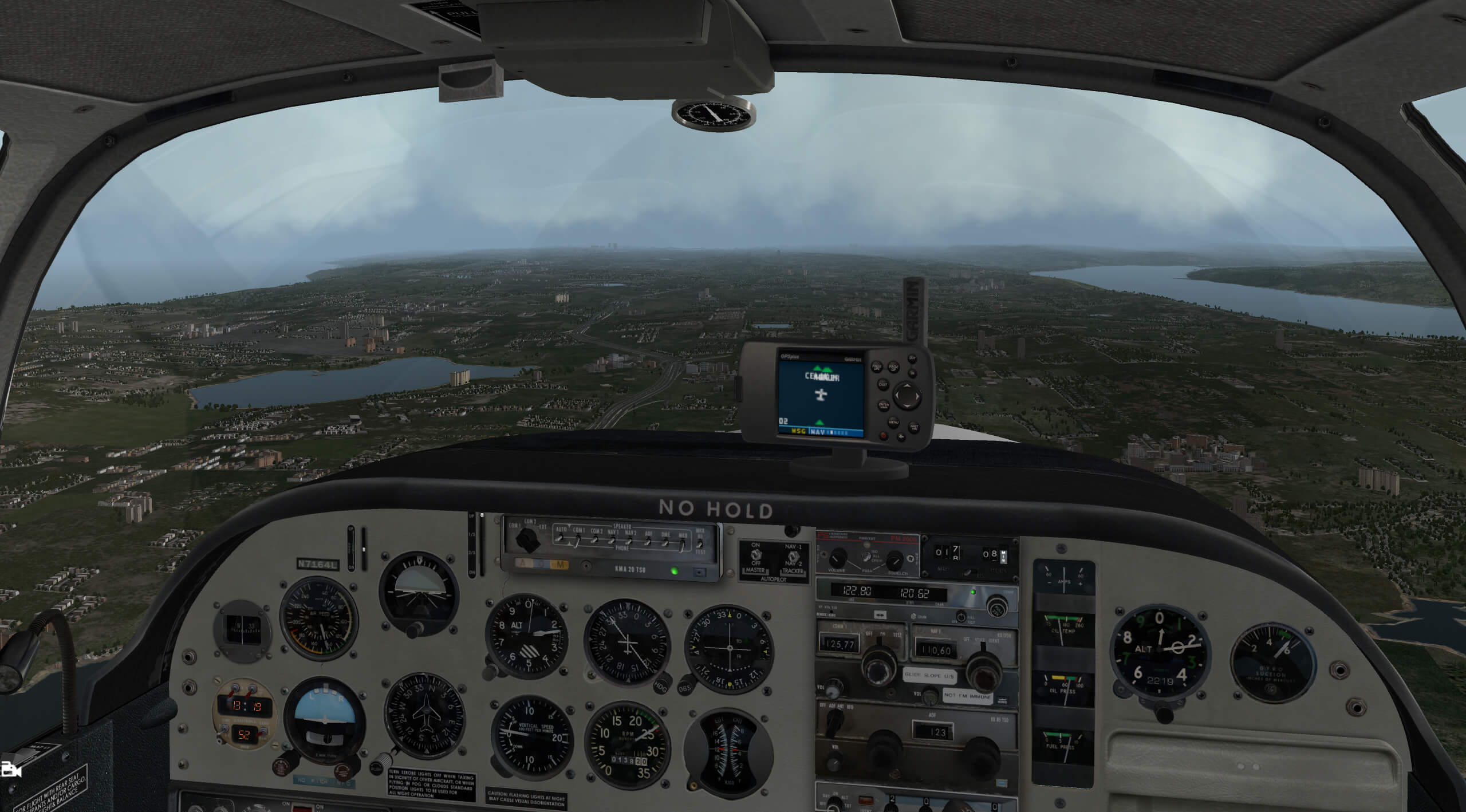 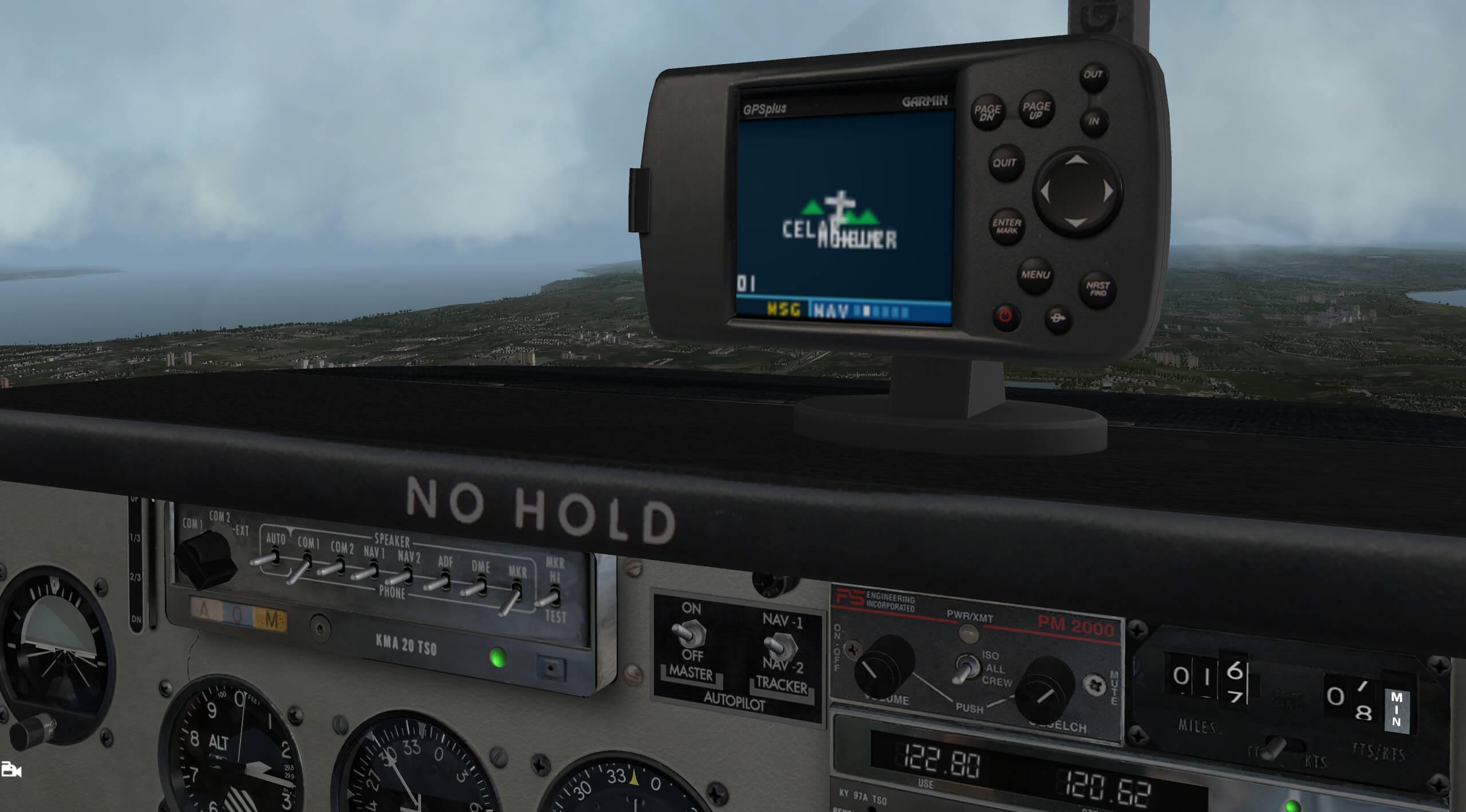 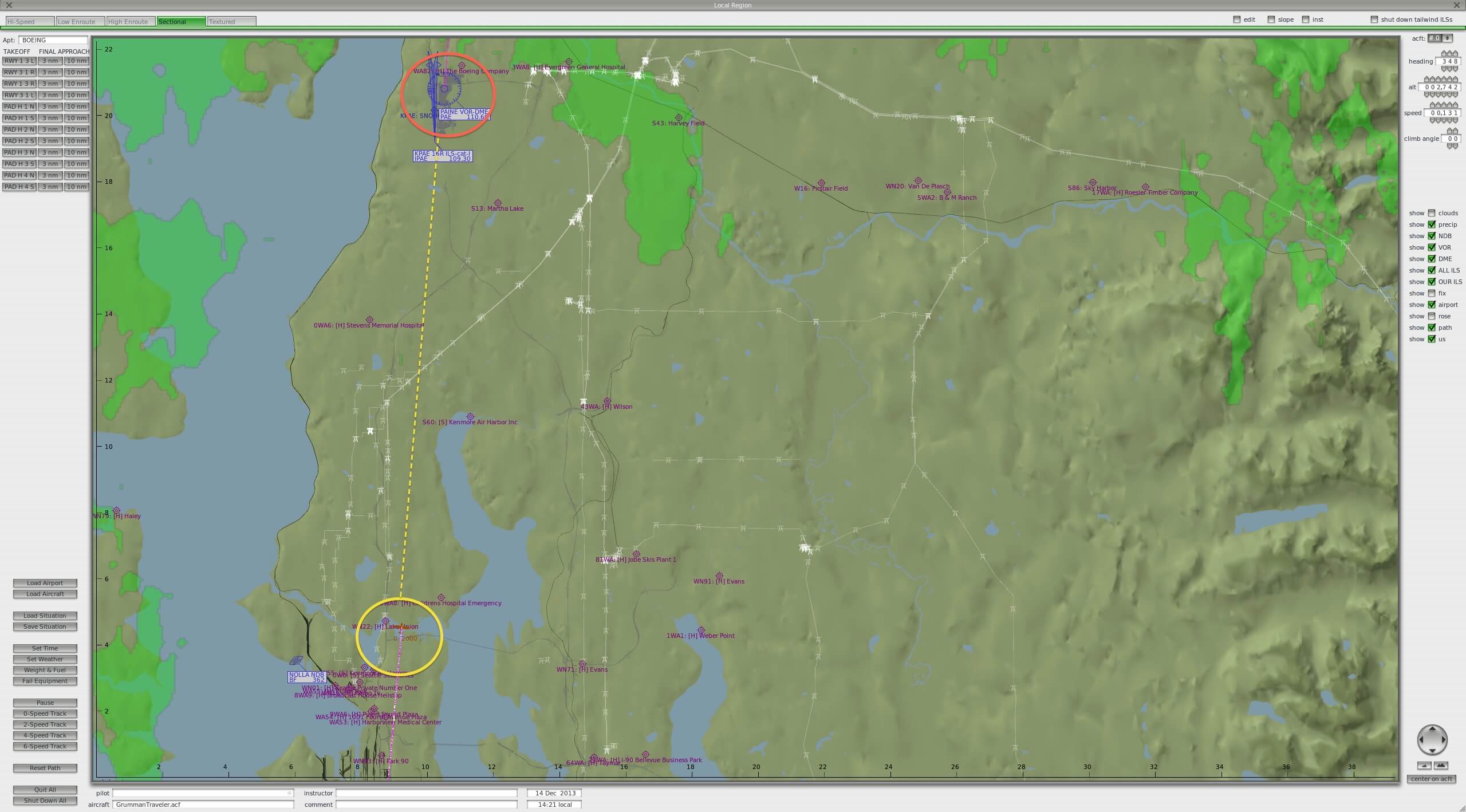 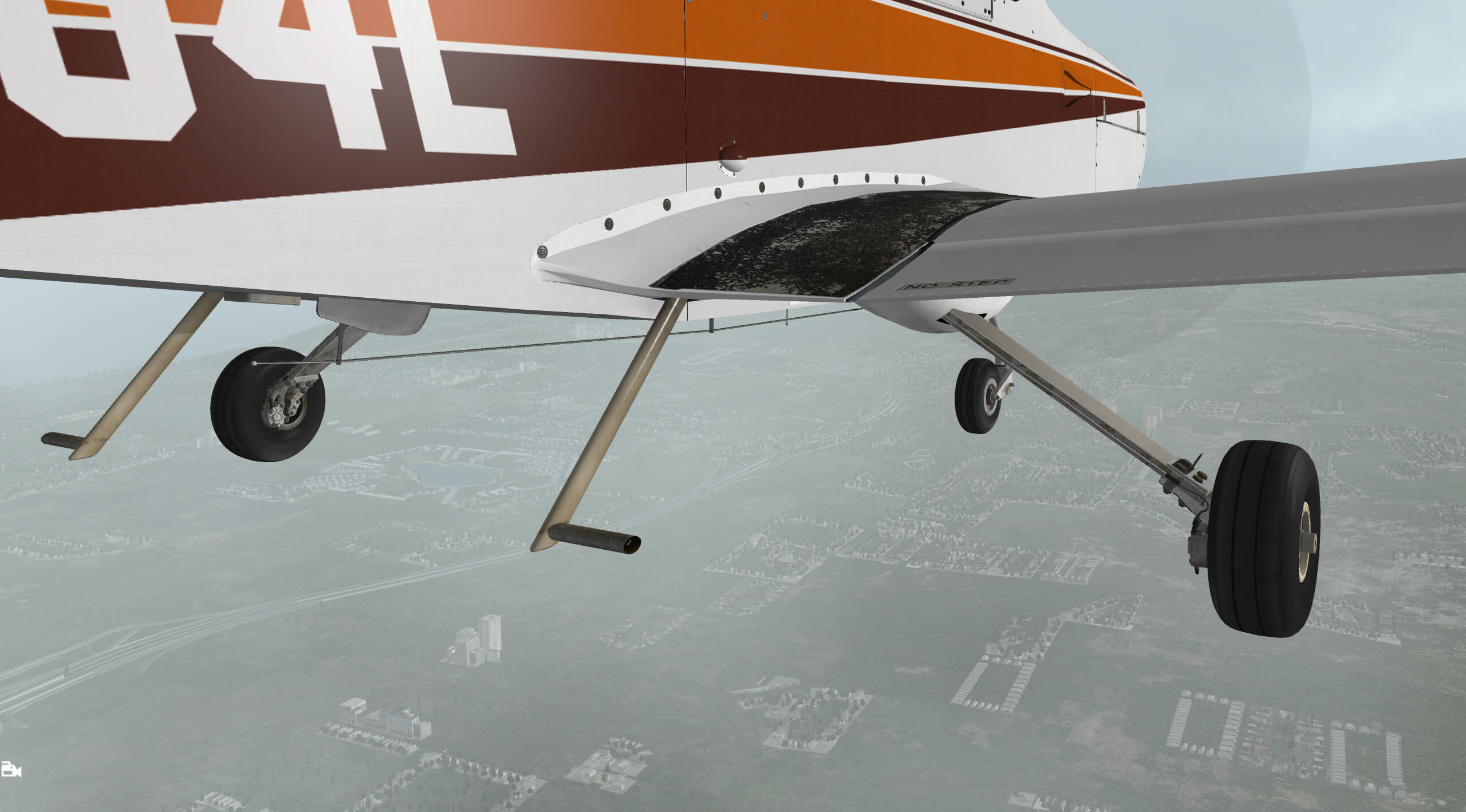 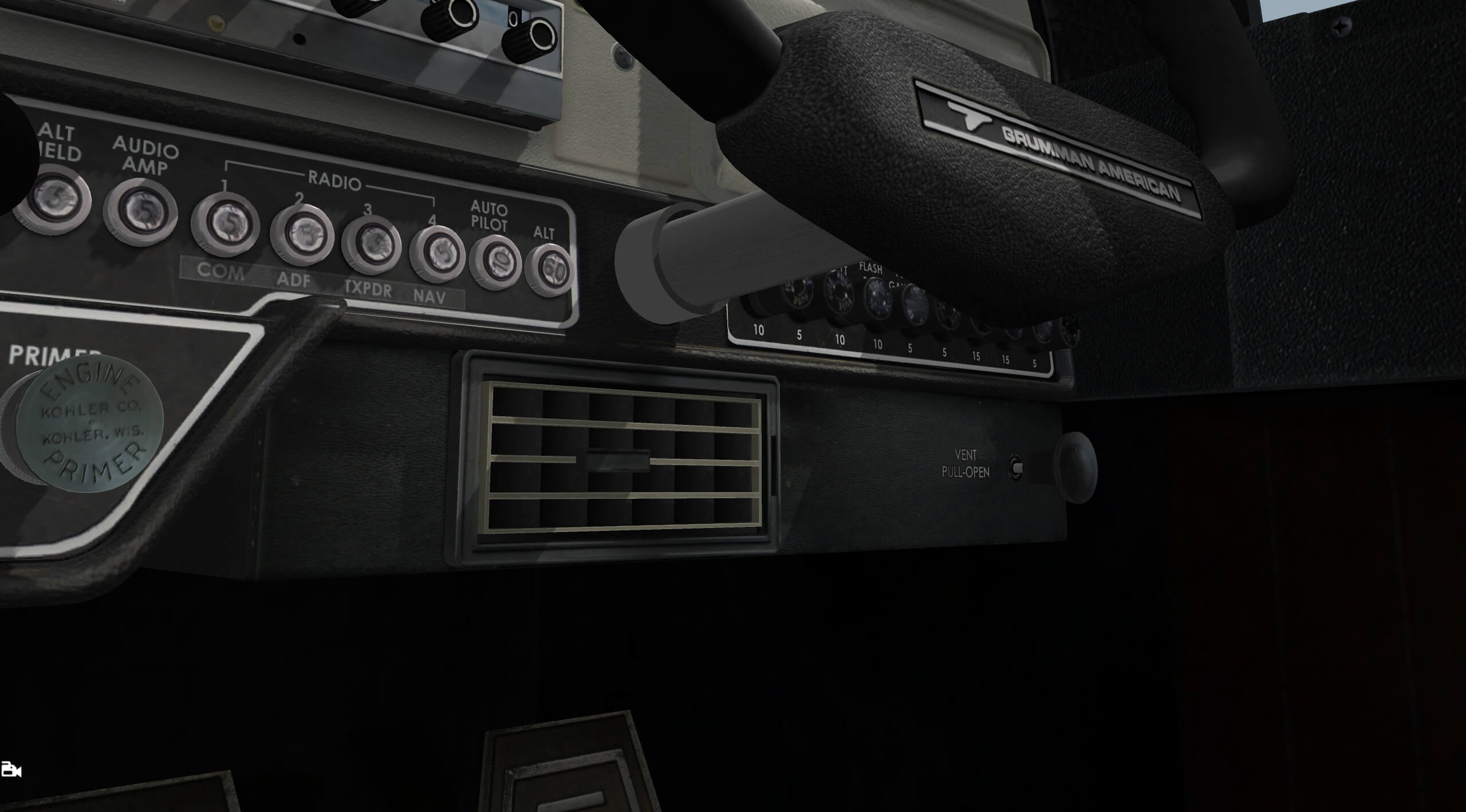 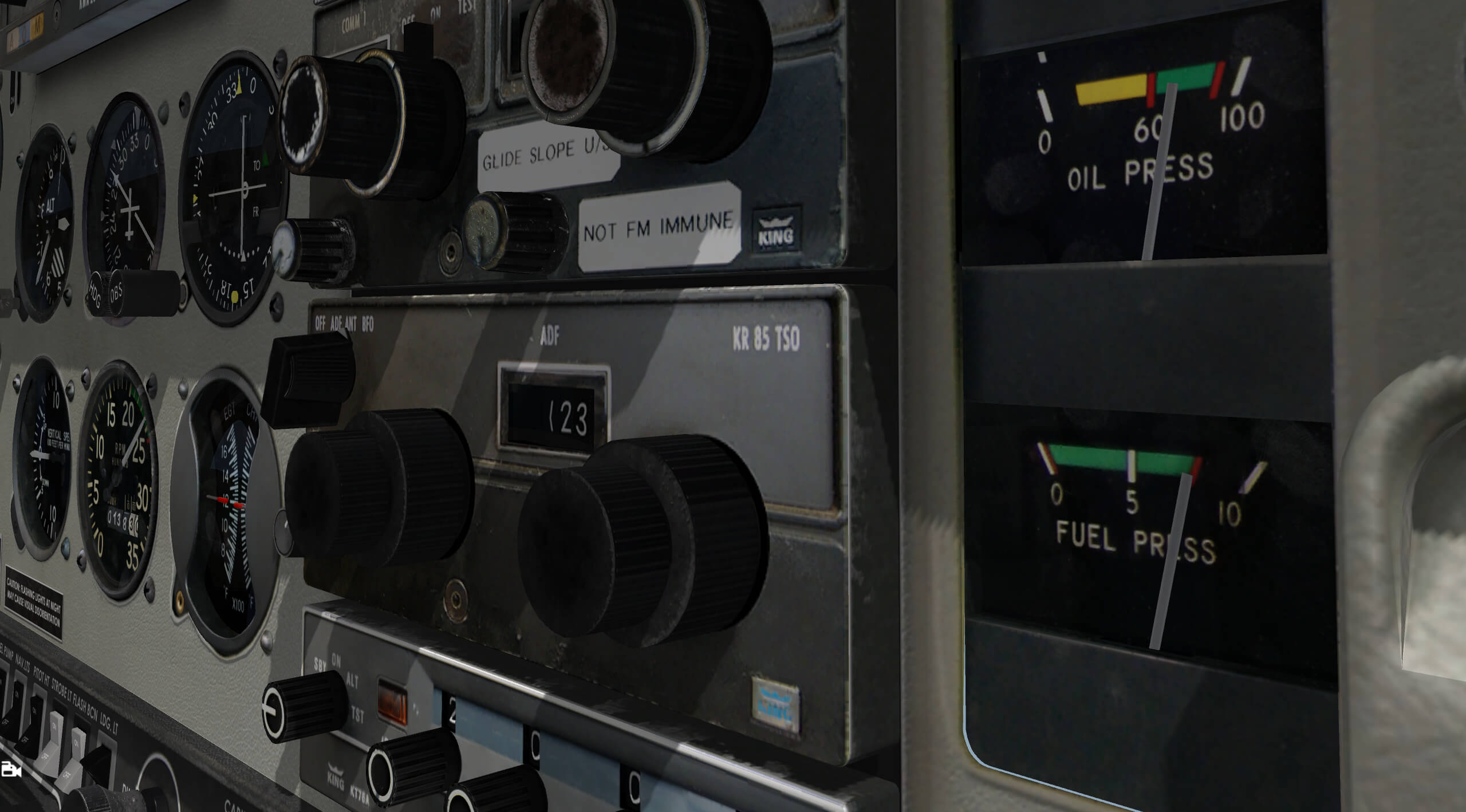 I’m approaching VOR PAINE and some miles before passing this station at approximately 3000 feet, I tune for PENN COVE (117.20). You can see that on the following screenshots. Don’t worry when you’re still flying with the AP. Just tune 117.20, adjust the OBS knob for needle position and TO indication, and you’re done. Suppose you missed the TO indication and actually the OBS indicator shows FROM, then you’ll notice that the aircraft AP will fly in an opposite direction. When this happens, you know “I did something wrong and not the aircraft”. 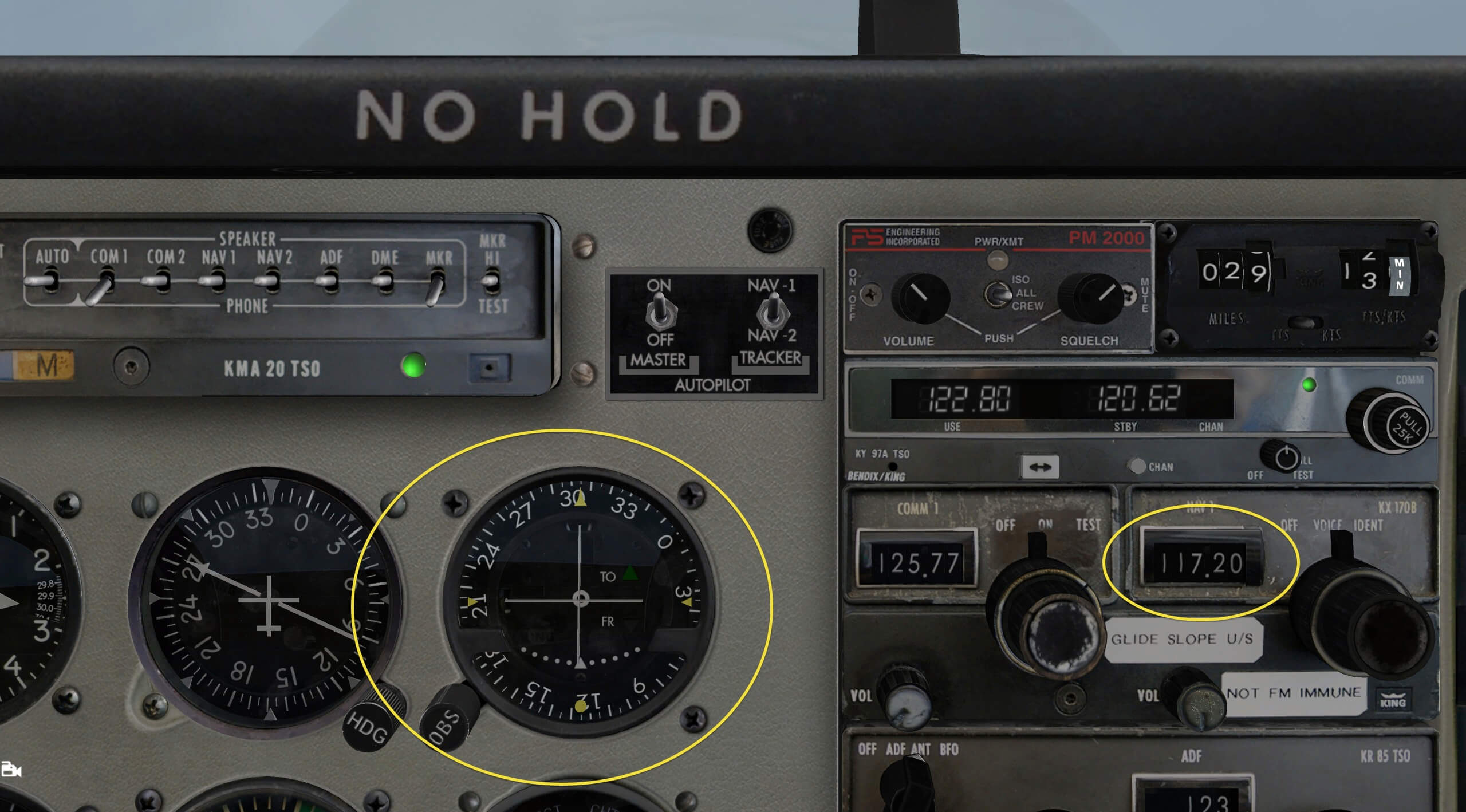 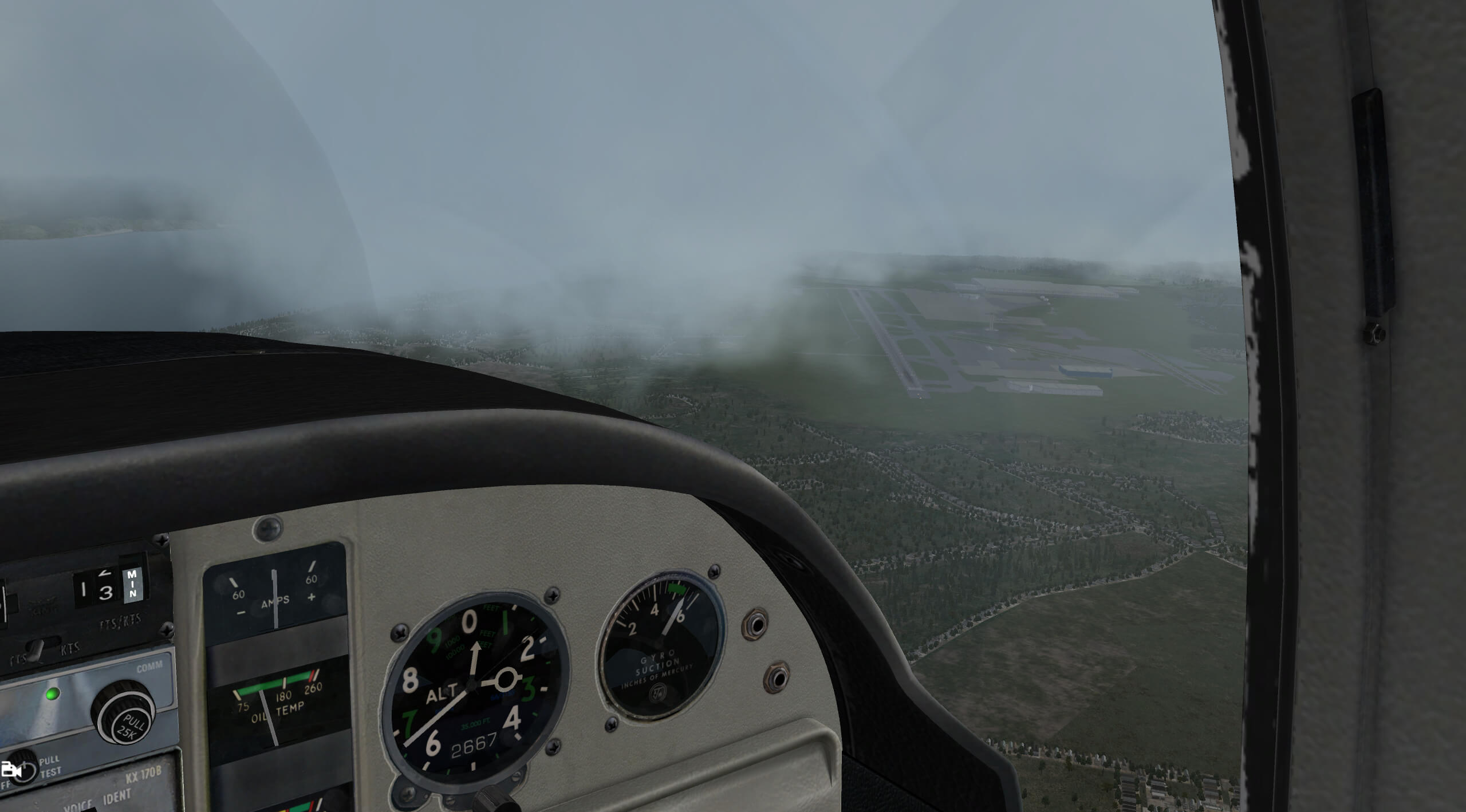 On the XP10 MAP view below you can see that we’re approaching a light grey area. This means clouds, perhaps some rain, but for sure I won’t see anything down there on the ground. Oops, that’s right; this is an IFR flight where it is allowed to fly under cloudy conditions. Under these conditions it’s good to have a chart with you and double check for yourself you’re not flying towards a mountain! 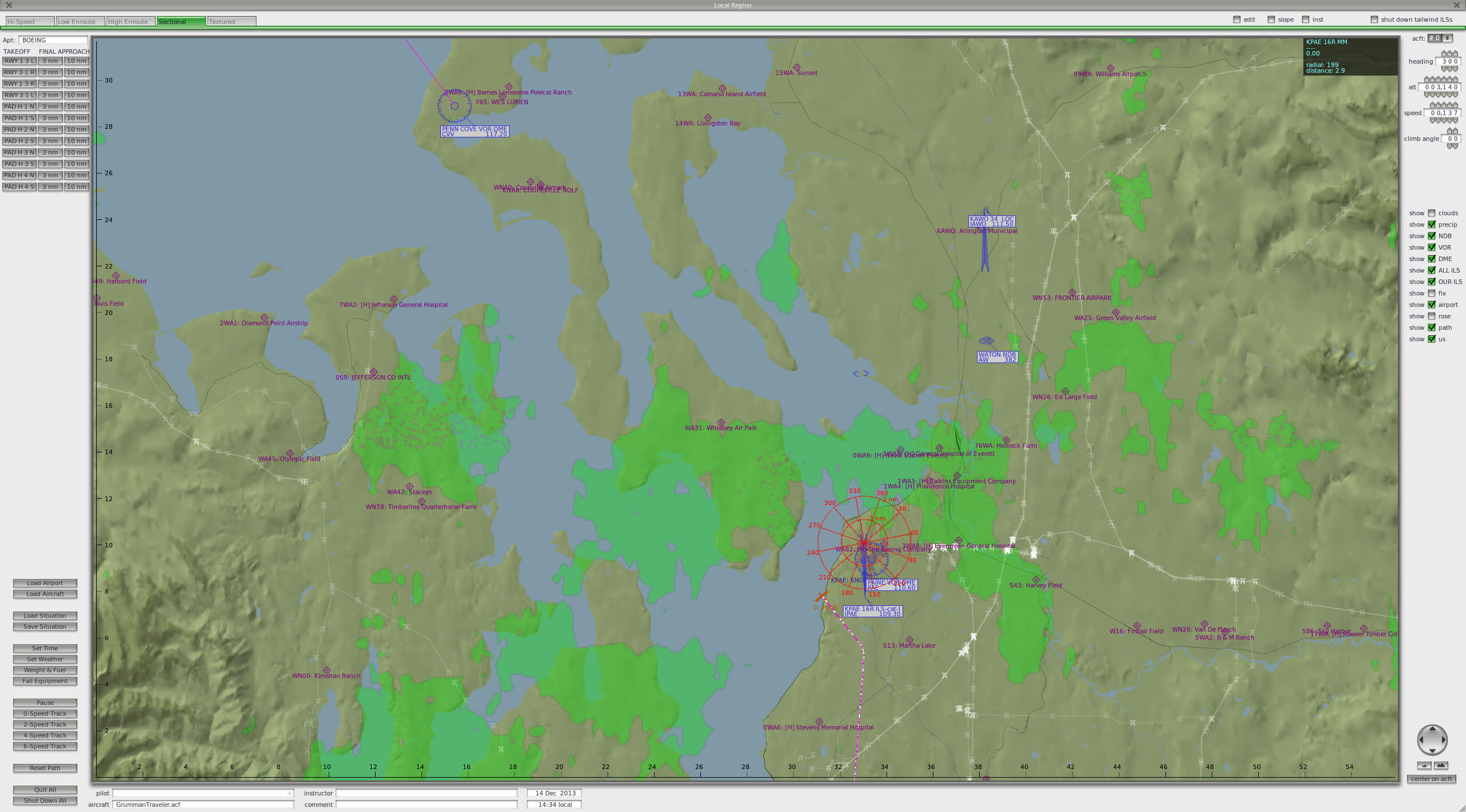 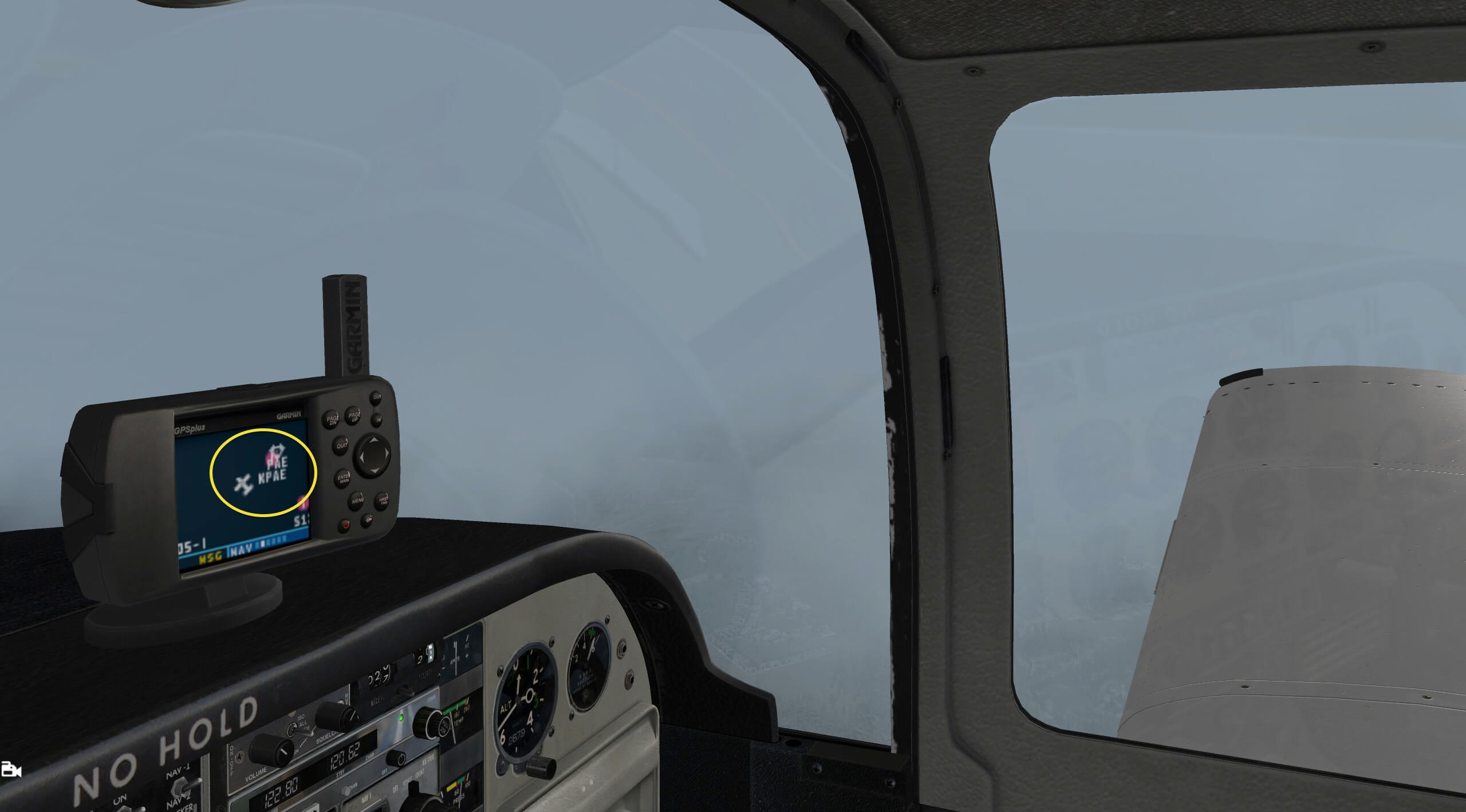 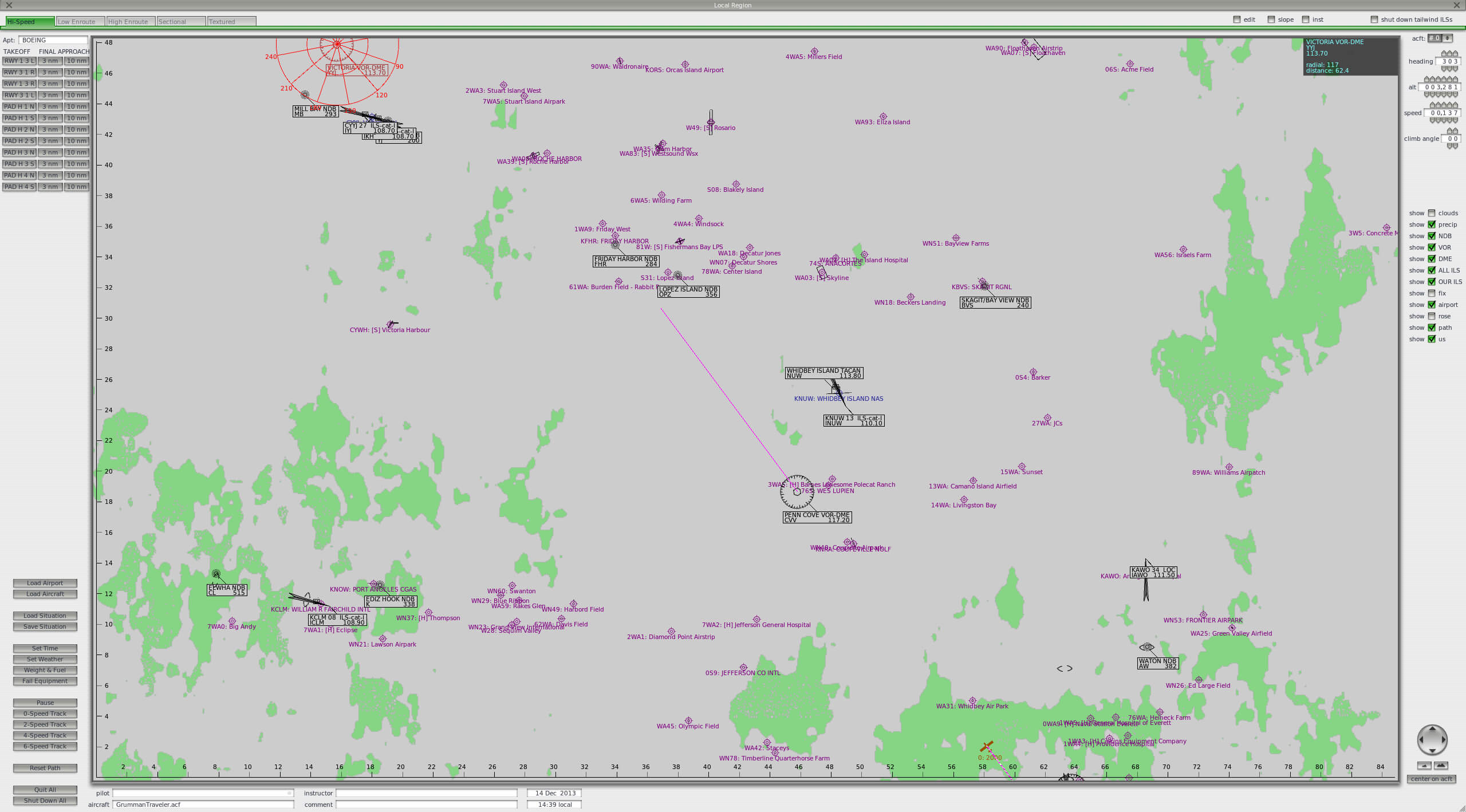 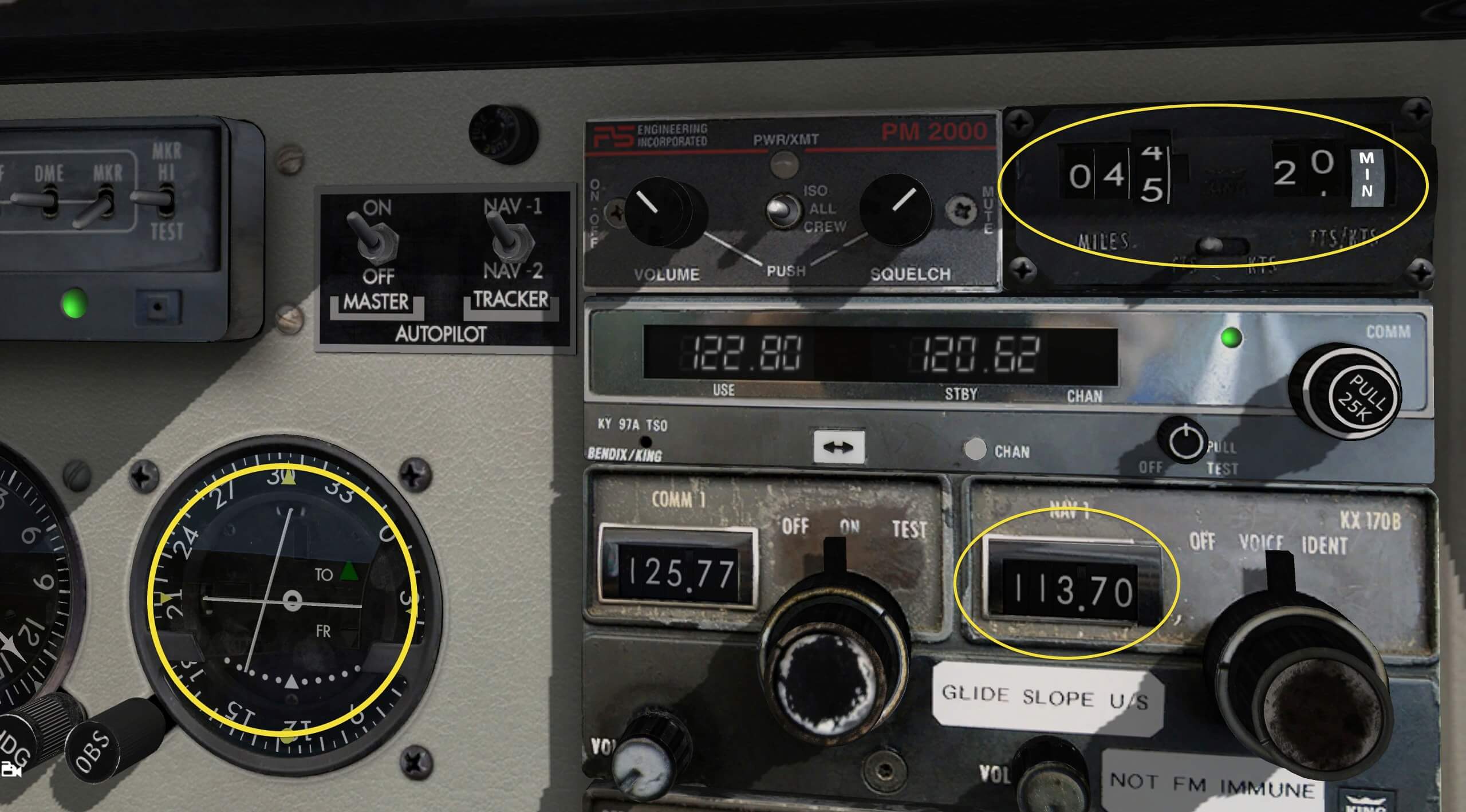 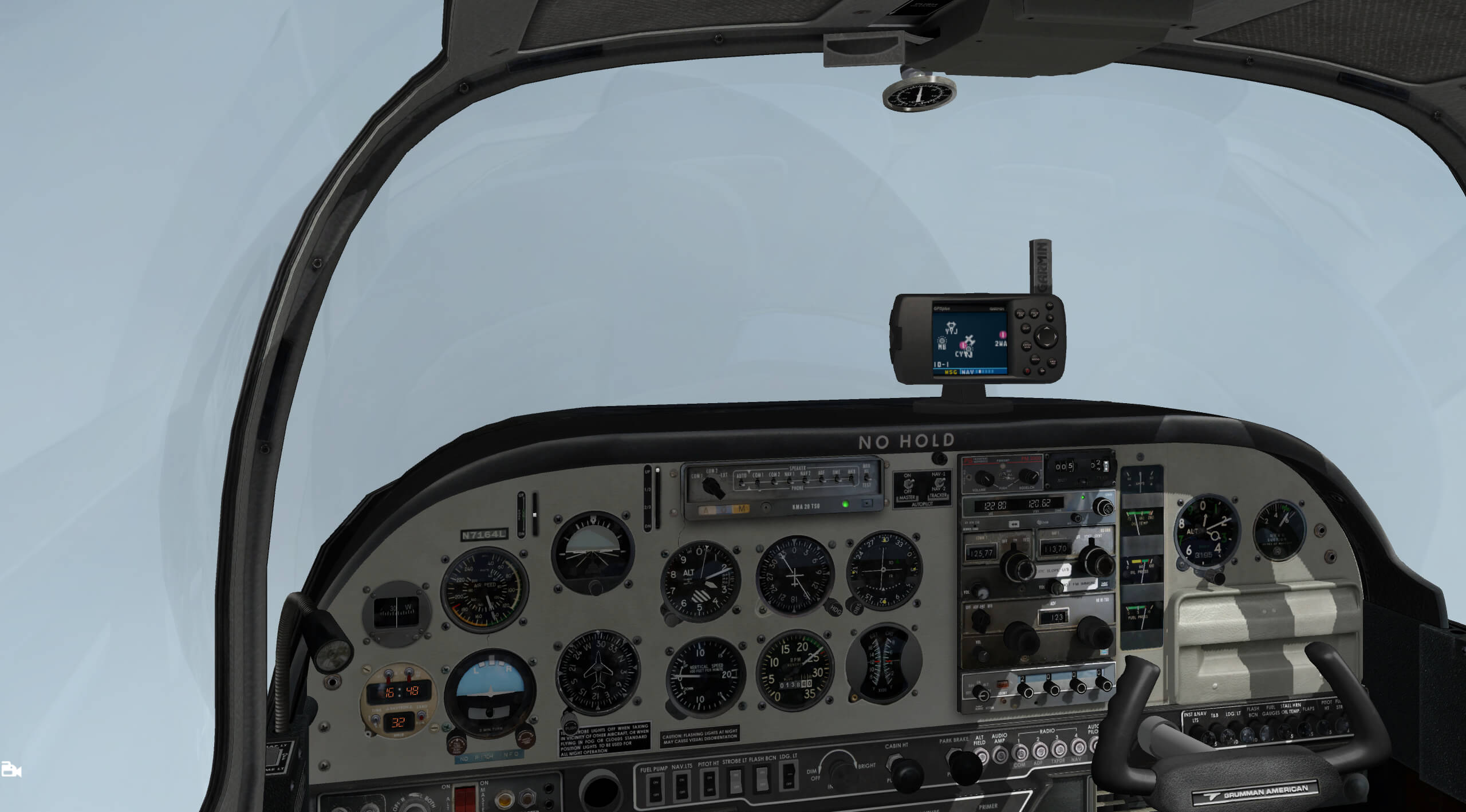 The following set of screenshots, some of which are marked with circles to identify what to see or what’s going to happen. Especially with the AP connected, it’s an easy aircraft. No complicated EFIS, ECAM or EICAS instruments and also no FMS, just you and me. Oops, sorry, the “me” is the Grumman Traveler. This add-on vFlyteAir Grumman American Traveler / AA-5 review highlights a little more about the aircraft in case you prefer to use the AP with NAV tracking to relax a little more on your flight then flying the aircraft by yourself. After passing VOR VANCOUVER the most logical idea is to land at VANCOUVER airport. The VOR beacon is not next of the airport ILS beacons, but close enough to see the airport from a distance. The weather has changed a little bit and it has become dark. With an international airport like Vancouver, it’s not a problem to see. Enjoy the last set of screenshots when I’ve passed VANCOUVER VOR/DME and heading for the international airport. 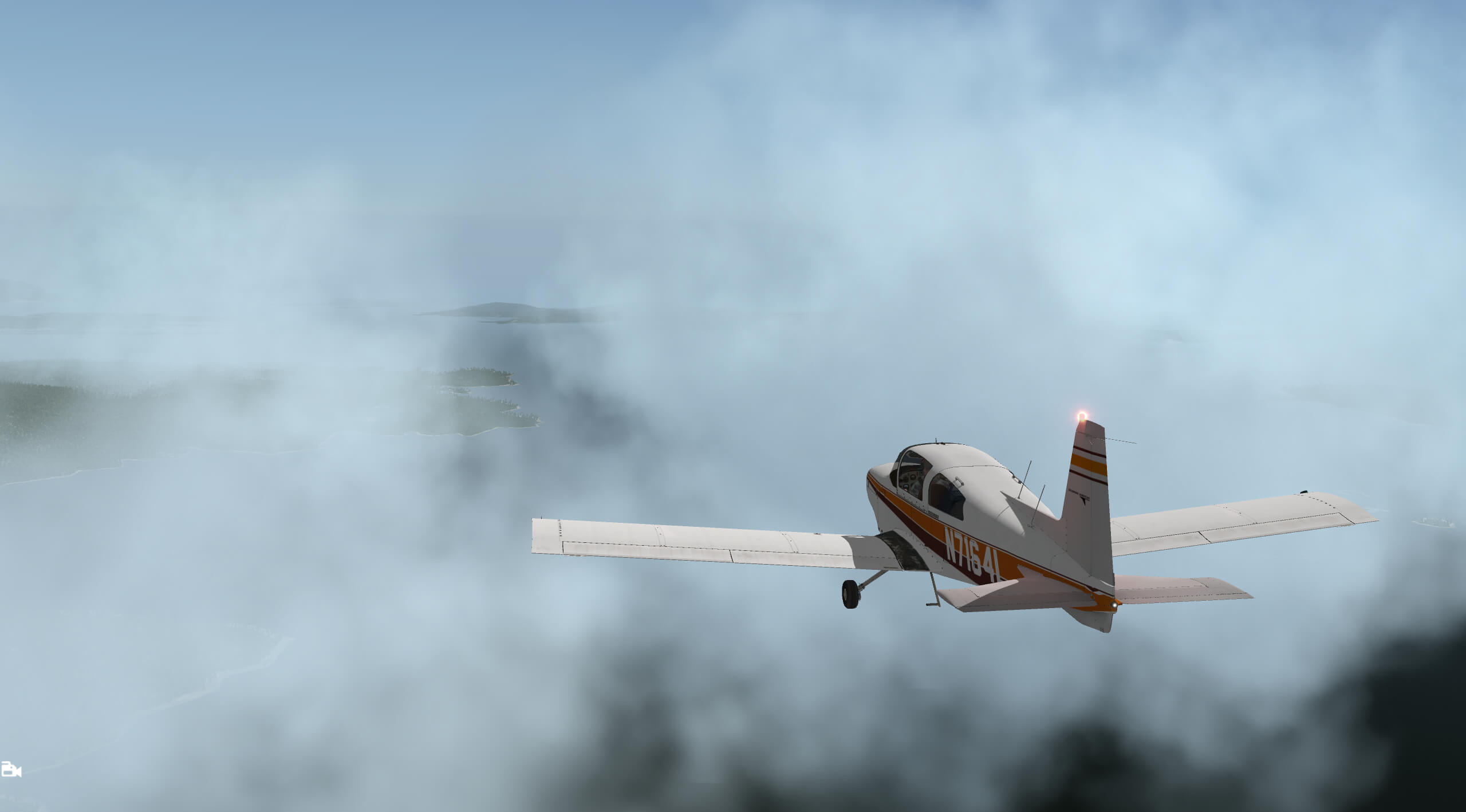 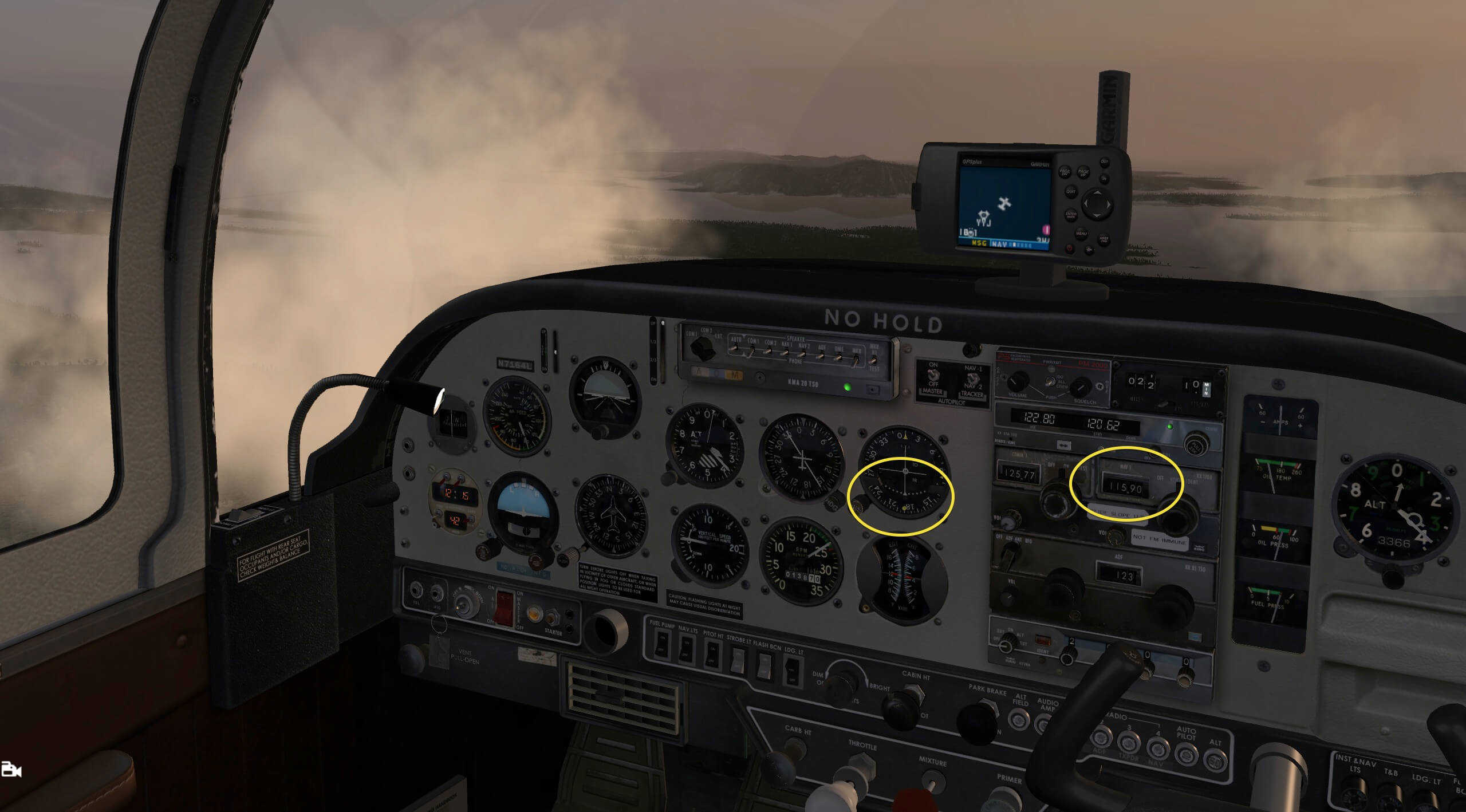 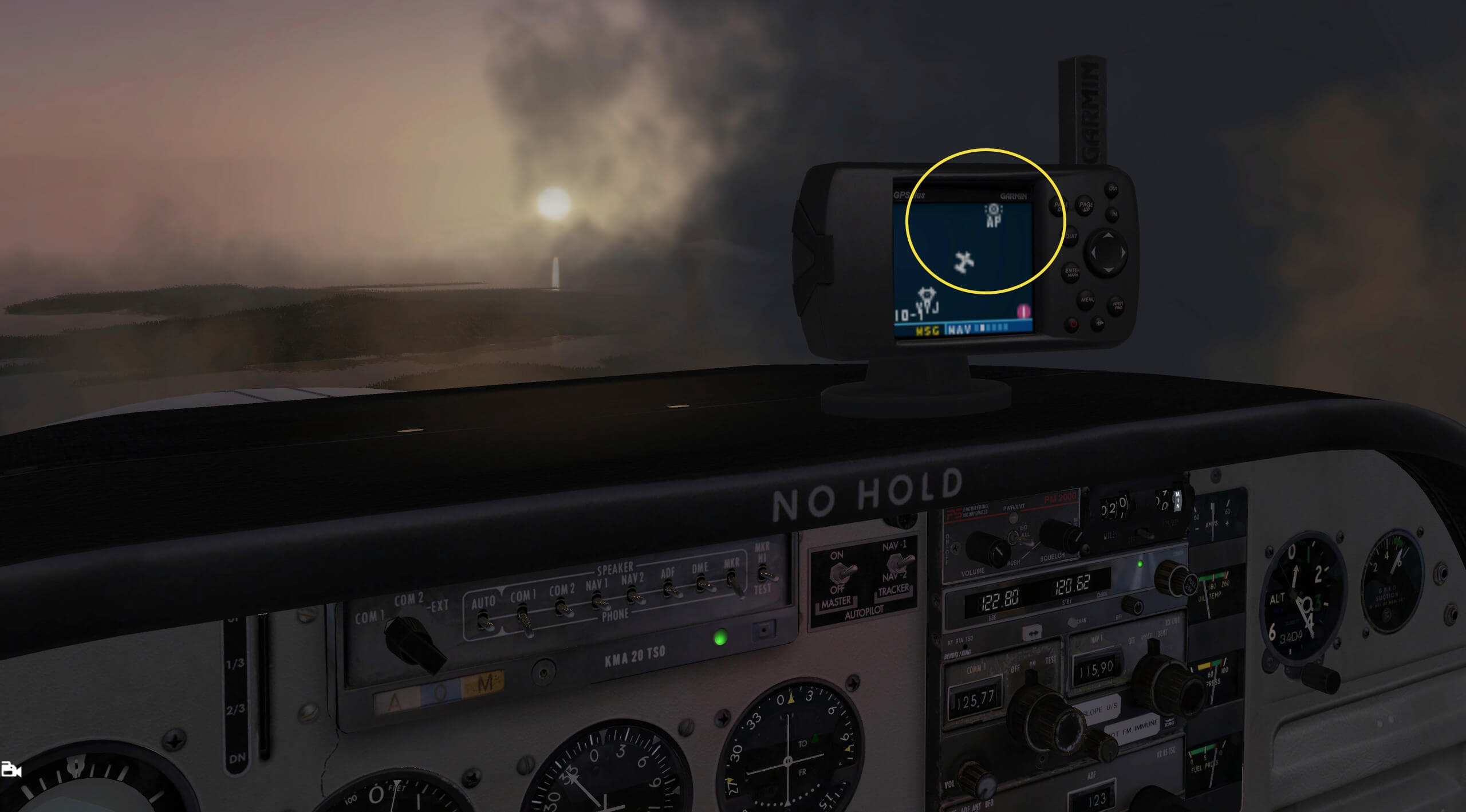 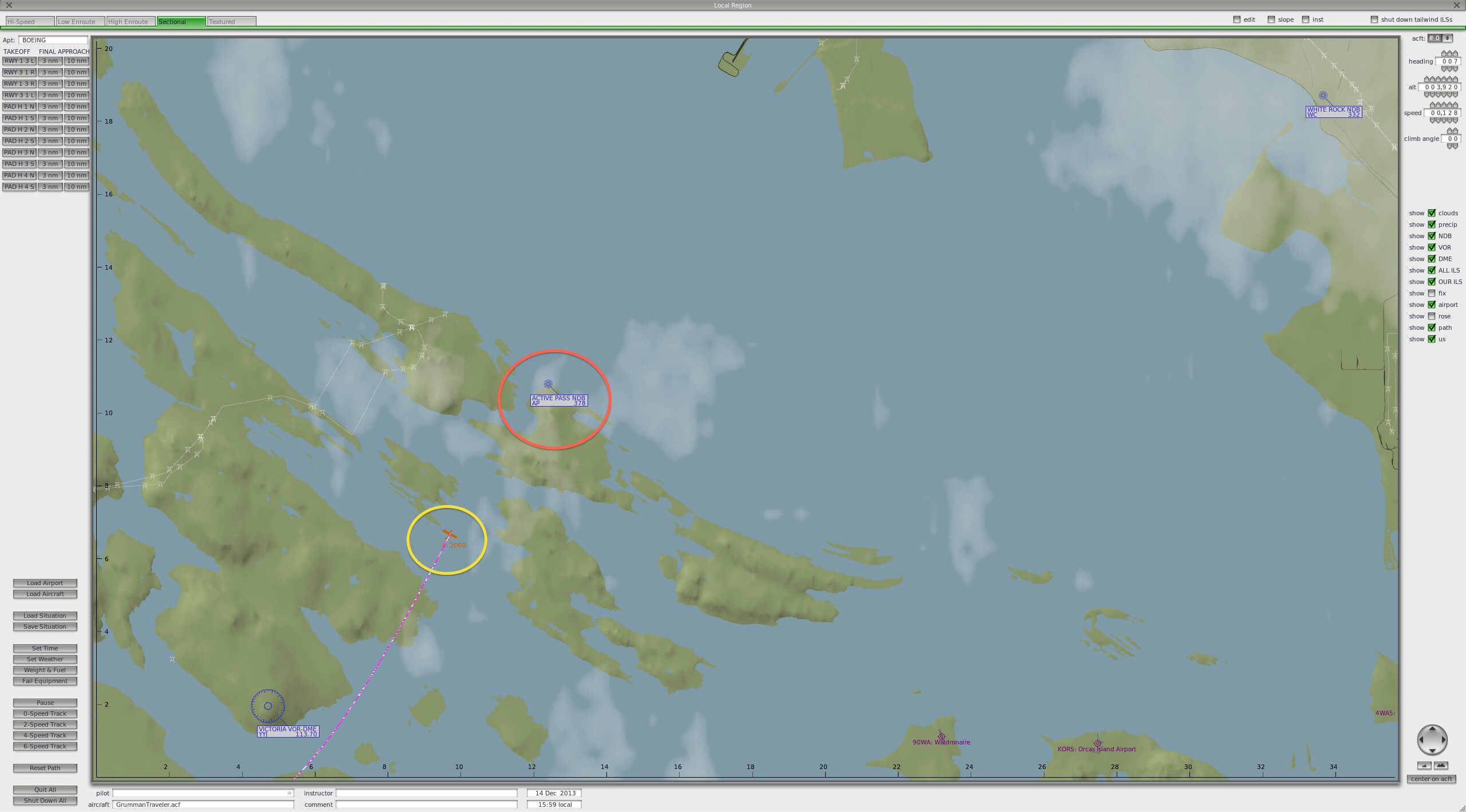 Flying towards and tuned for VOR/DME VANCOUVER (115.90), but along this flight path we cross more or less NDB “AP”. This can be seen on the GPS instrument and on the XP10 MAP. 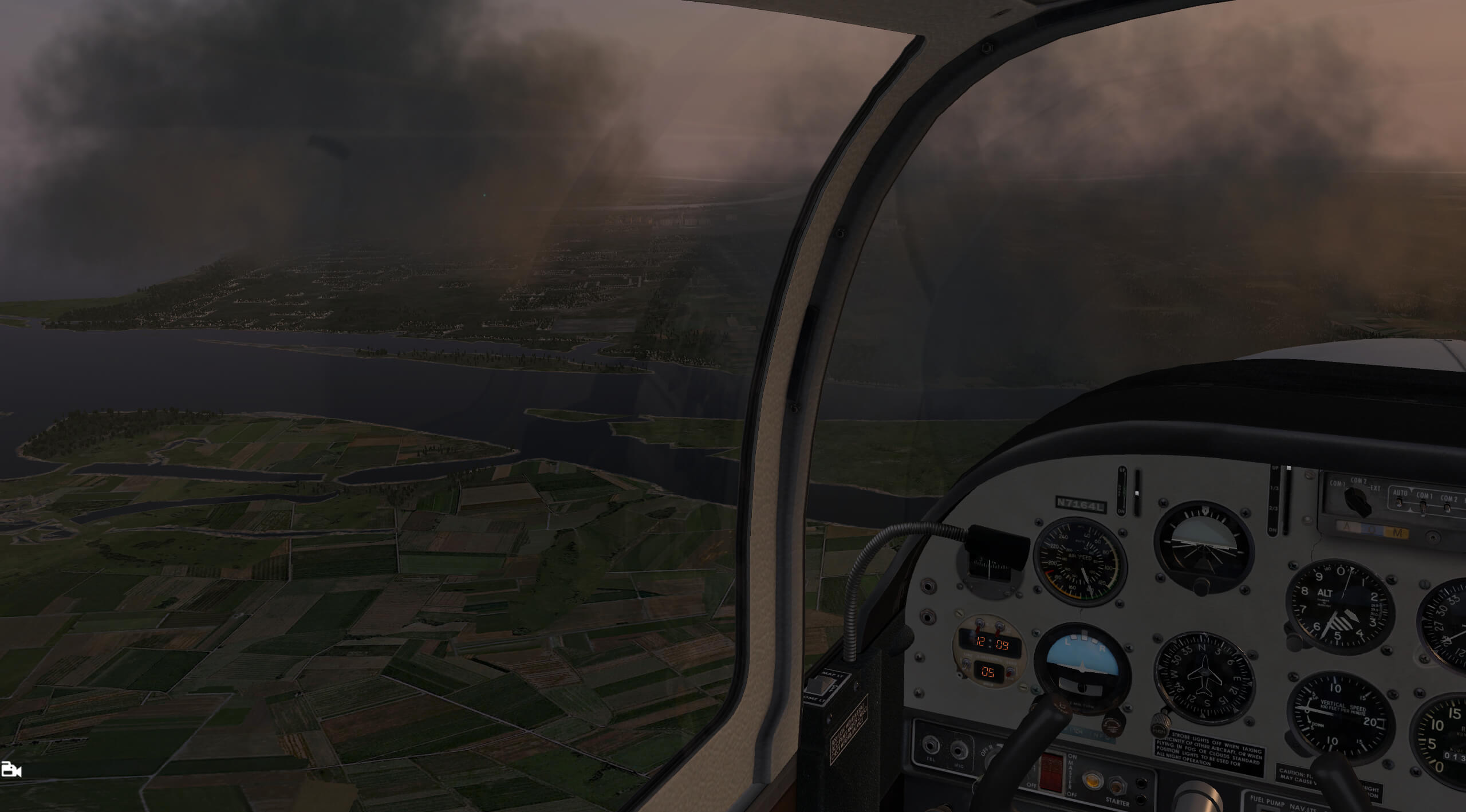 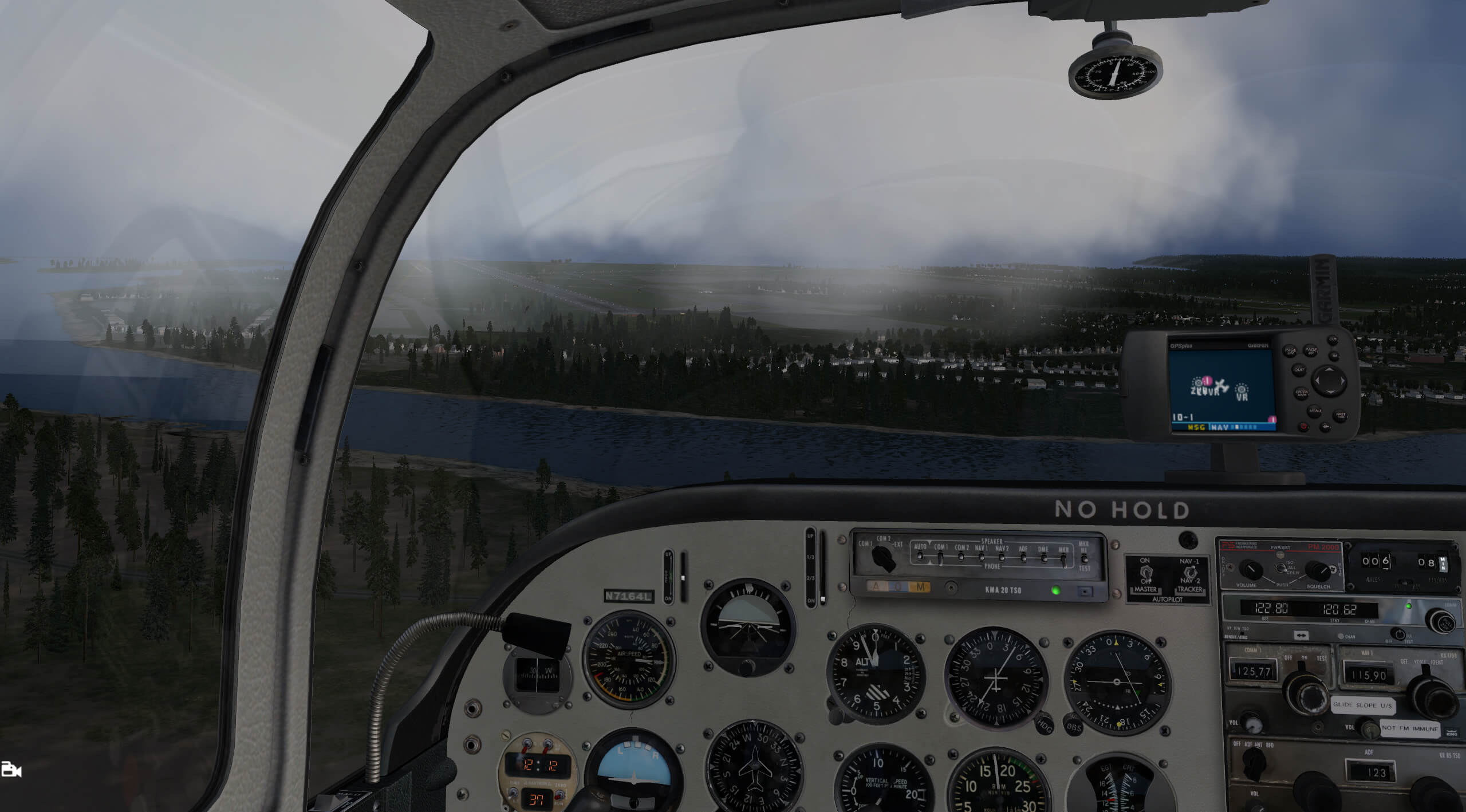 Feel free to contact me if you’ve got additional questions related to this impression. You can reach me via email Angelique.van.Campen@gmail.com.