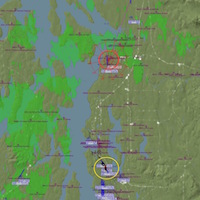 Although the vFlyteAir Grumman American Traveler can be flown easy under VFR conditions, flying IFR with the AP gives you a lot more time to look outside, making longer flights and try to keep it a little more relaxing.

On today’s flight I depart from KBFI (Boeing Field) and via the following VOR/DME stations, I end up in Vancouver. The short flight plan is as follows: PAINE (110.60) – PENN COVE (117.20) – VICTORIA (113.70) – VANCOUVER (115.90) we’re approaching Vancouver International Airport (CYVR). I used for this flight VOR beacons with preferable DME information. And so on …….

So let’s go for a typical IFR flight and see how it works. Curious? Check it out at X-Plained.