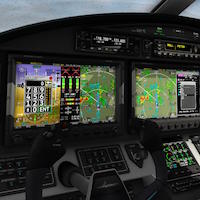 Aerobask lead developer Stephane Buon is pleased to announce on behalf of his team the release of the Epic Victory version 2.0.

Version 2.0 features the brand new Skyview touch. The Skyview® is a new generation of glass panel avionics available in small aircraft. The new ‘Touch’ system allows for easy input of data into the FMS. It also includes support for SID, STAR, Airways and TCAS. The Epic Victory 2.0 is Aerobask’s best aircraft yet. Expect similar updates to be ported to their other aircraft in the weeks to come.

Want to read all about the new features and/or improvements, check out this dedicated change log web page.