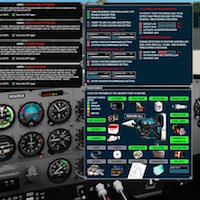 On behalf of Juraj from Airfoillabs I’m pleased to inform you about their latest update – version 1.61 – for the Cessna C172SP. According to Juraj ….. “It took us more time than previewed, but I strongly believe it was worth it. A lot of new very essential features and stuff you don’t see but it is so much more realistic. Still there will be new functionalities and fixes added in 1.6X version later during summer and also a new “intelligent instructor” failure activation training system.”

“I apologize that we were not able to respond on the forums as we were fully concentrated on the 1.61 release. This will change as mentioned in the previous post as a new college will take care of you pilots and helps us all from the beginning of August.”

For the complete change list, visit the dedicated X-Plane.Org page.