Hi all, your personal reporter Angelique van Campen takes you on a Floridian cross country trip from Arcadia Municipal (X06) to Coral Creek (FA54), at least, that was the plan.

For this cross country flight I use – of course – Orbx TrueEarth Florida HD although you can also use Orbx Florida SD package. It’s a bit up to you what you want or prefer and if you want to download the huge GBs of the HD package. I would suggest that the SD package is perfect for IFR flights while the HD is perfect for VFR. The HD will cost you some more frame rates while the SD is less but that quality of the SD tiles is less for lower altitudes. Anyway, when you bought the HD pack, you can freely download the SD too, just in case you need it.

OK, my cross country flight.
It starts at Arcadia Municipal Airport (X06) and ends at Coral Creek Airport (FA54) which is privately owned and provides its members and guests convenient access to the Boca Grande area. The airport offers limited access for guests.

Before I forget it, Arcadia Municipal (X06) is a publicity owned airport and in the year 2014 Friends of Arcadia Airport, Inc. began work clearing some unused land on the airport to develop a Fly-In/Camp-Out Center. Recreational under wing camping is growing in popularity and Friends recognized the potential of this type of on airport facility to help make Arcadia Municipal a destination airport for pilots who enjoy airplane camping. More information can be found via this Friends of Arcadia Airport URL. 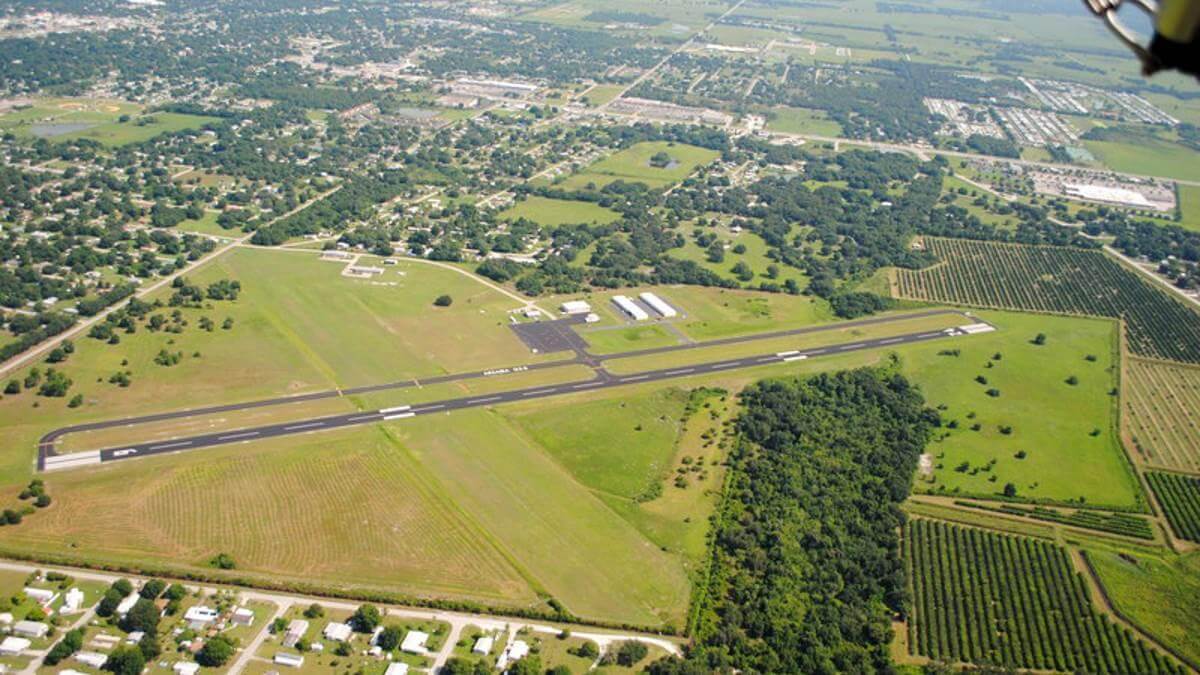 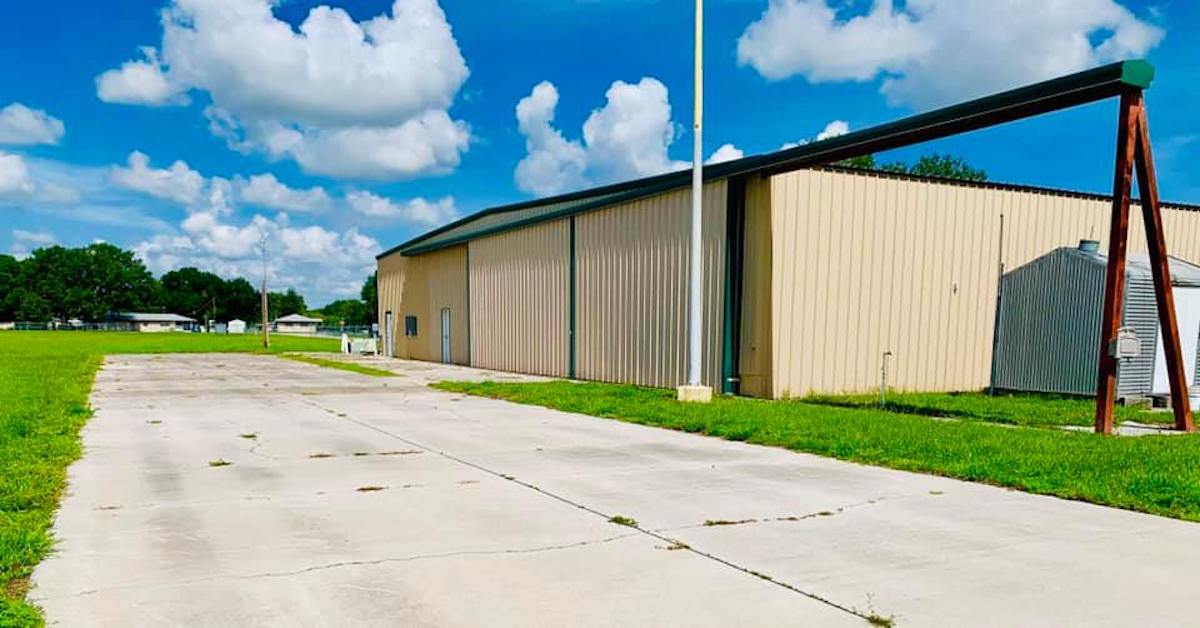 He Angelique, hold on … you wrote in the first sentence “at least, that was the plan”, so what’s going on. After checking DC Sceneries Design Coral Creek FA54 private airport, I found it is not fair to include this modeled pay-ware airport in this review. It’s very basic and keep in mind, it also cost 12 USD, but it is and stays very basic. With that in my mind, I informed DC Sceneries Design that the cross-country flight will only a flight from-to or to-from Arcadia Municipal Airport.

The modeled airport for this “modified” cross country flight is from DC Scenery Design and although the airport is basic, remember, it is also basic, simple and straightforward in real. The overall price for KX06 is only 12.00 USD, so is it worth it?

Be honest, 12.00 USD is not much at all but I may hope that this airport comes with dedicated in-house made objects and that it also includes ortho textures that finishes it all. And as said before and that was the initial plan, when you did plan to do the same cross country trip as I had planned, you need in my humble opinion either Orbx TrueEarth SD or HD, preferable HD or you go for other freeware ortho Florida packages or you just check the included manual with links to the area ortho package as well as the belonging overlay file.

That said, I’ve decided on the fly to go for the ortho links in the manual. Using Orbx TrueEarth Florida HD or SD is for me very easy, but let’s check out what the provided DC Scenery Design ortho package offers. 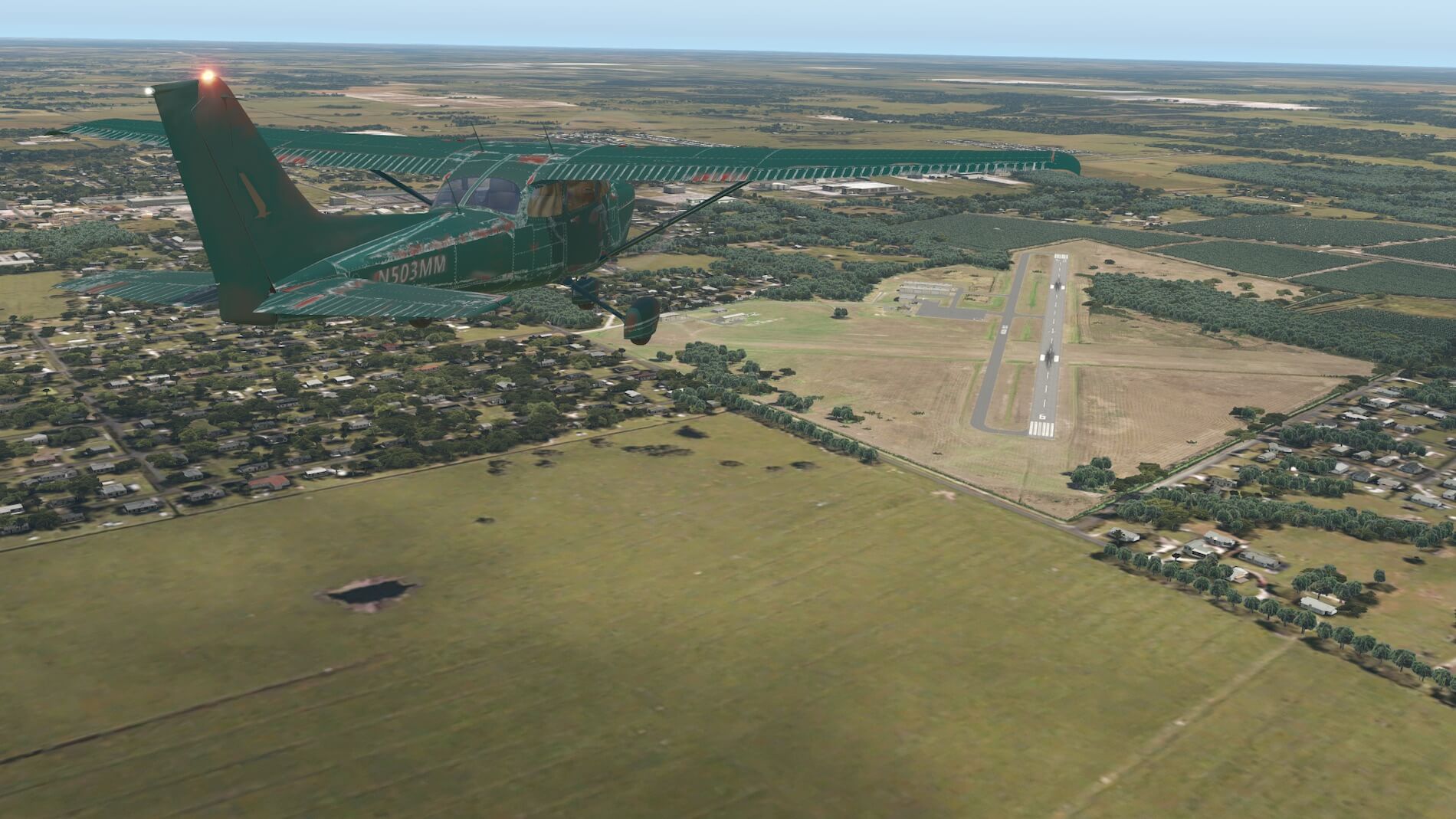 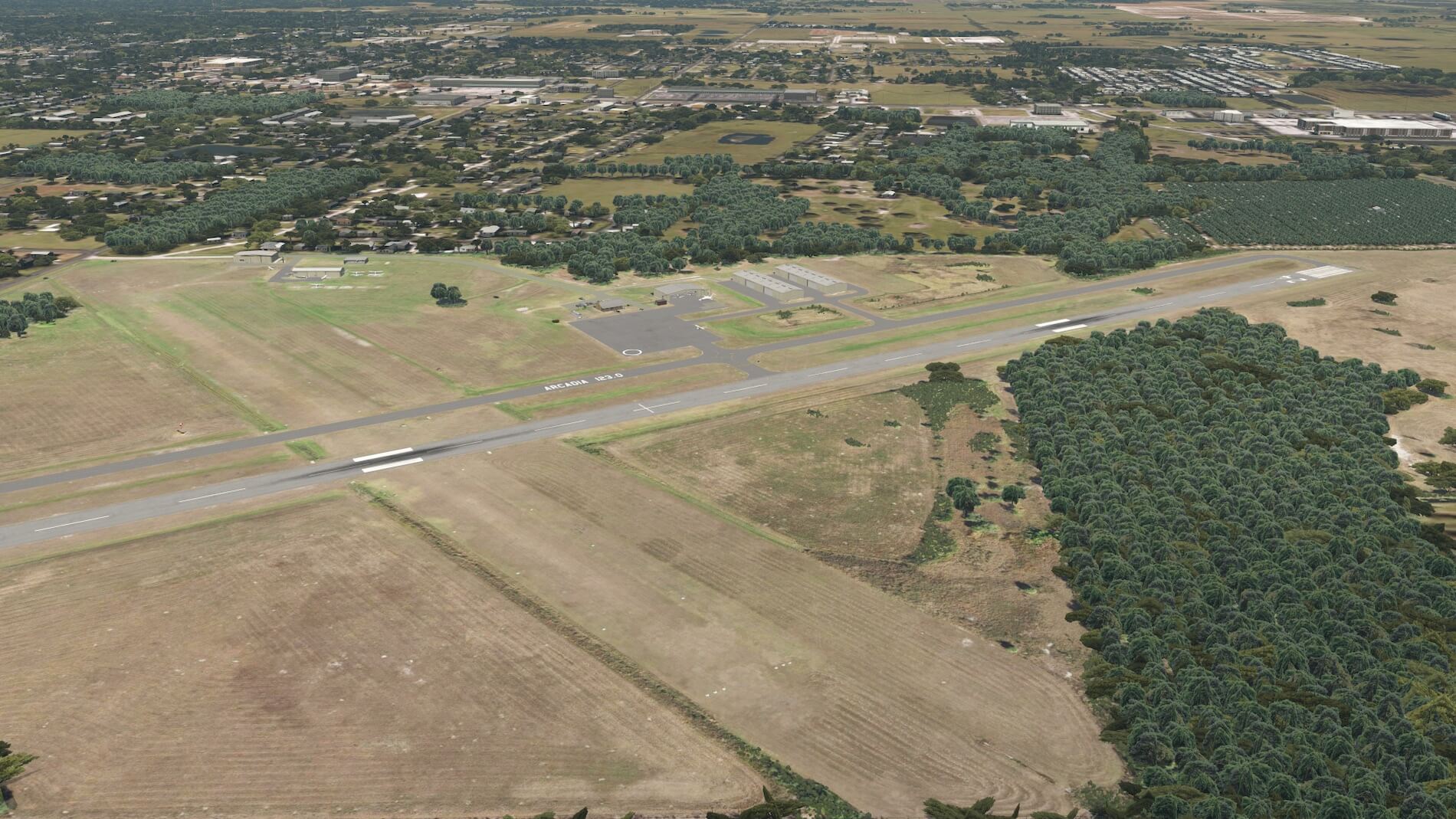 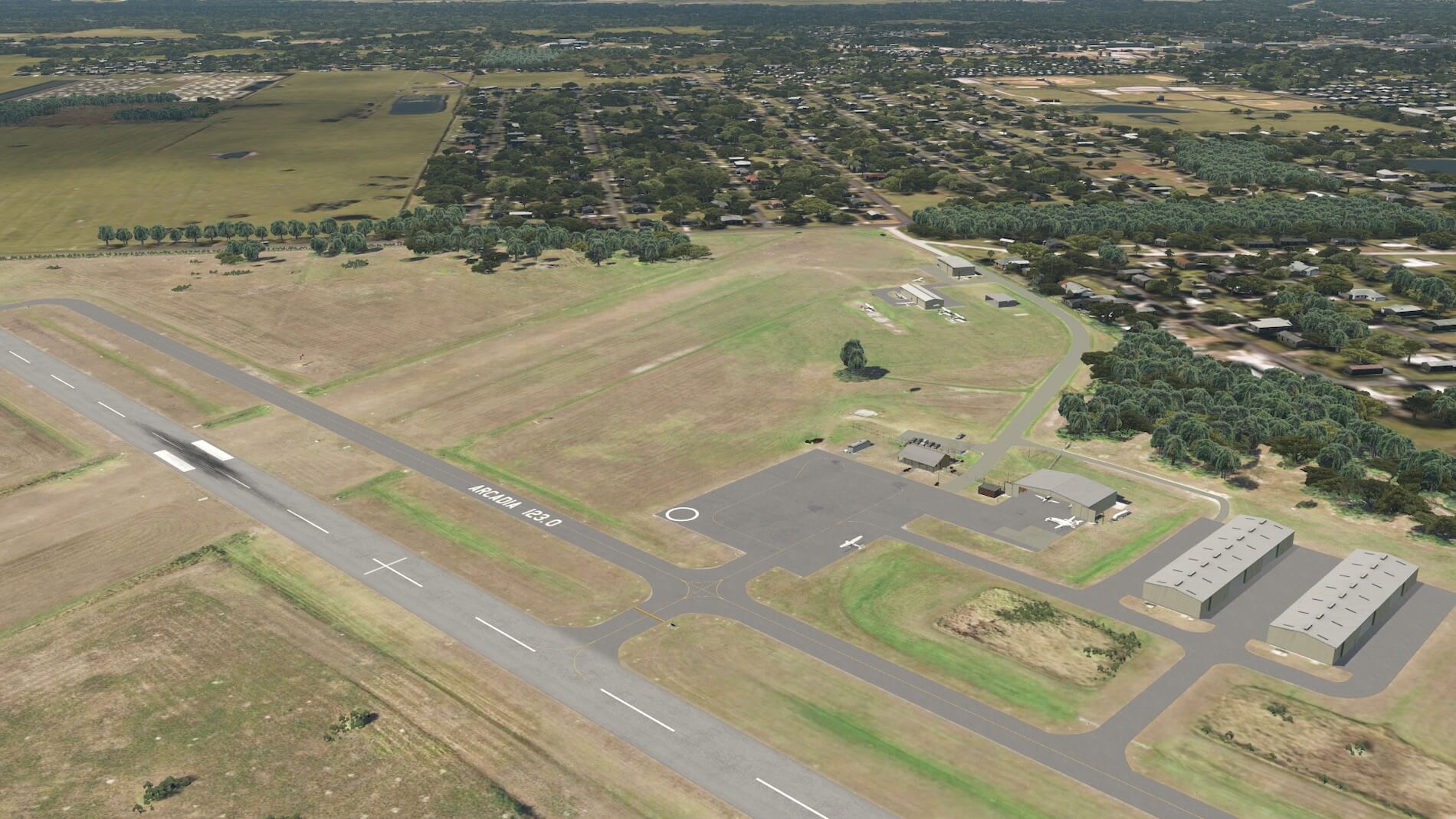 Before I start exploring DC Sceneries Design Arcadia Municipal Airport, I need to inform you that the provided manual is only 2 pages. Not much but on the other hand, you don’t need much more. Just copy and paste the airport package into your Custom Scenery folder or use an alias/shortcut or symbolic link.

My favorite C172 is parked near the hangar which is just around the corner of the main apron. According to the provided Acrobat chart file, Arcadia Municipal is equipped with one paved and one turf runway (or just a grass runway) however when I look to Bing and Google map images, I only see yellow crosses at each end of the turf runway 14-32 which means in my humble opinion that this runway is no longer in use. But after checking many websites that offer X06 information including the local airport website, I must conclude that the turf runway is still in use. Very confusing although this has nothing to do with the DC Scenery Designs team. They did it right!

For the paved 24-06 runway there’s over the full length a taxi way which has around at half way 2 connections to the small apron. The apron provides a couple of parking places, an office and hangars. Along the drive way to the airport you’ll find some additional hangars. That’s it basically. Add to this grass, trees and ortho textures and you’ve got the modeled KX06.

At and around the apron I spot several static aircraft that are not controlled by X-Plane itself since I have static aircraft in the Rendering Settings page selected OFF so these static aircraft are added by DC Sceneries Design. Near the hangar from Wingman Aviation I see an Italian jet which seems a bit weird since Italy (Europe) is far away from Florida. Not sure why such an aircraft is placed in this scenery. The other static aircraft – Cessna C172, Baron 58, King Air – are all the default Laminar Research models while I had hoped that the developer could add a bit more of their own modeled aircraft in this scenery since having many N172SP registrations is not very realistic. I’d informed Diego from DC Sceneries Design about this and did a suggestion about replacing the default X-Plane aircraft by others. That said, not sure in which update this will be, but I’ve expressed my thoughts. 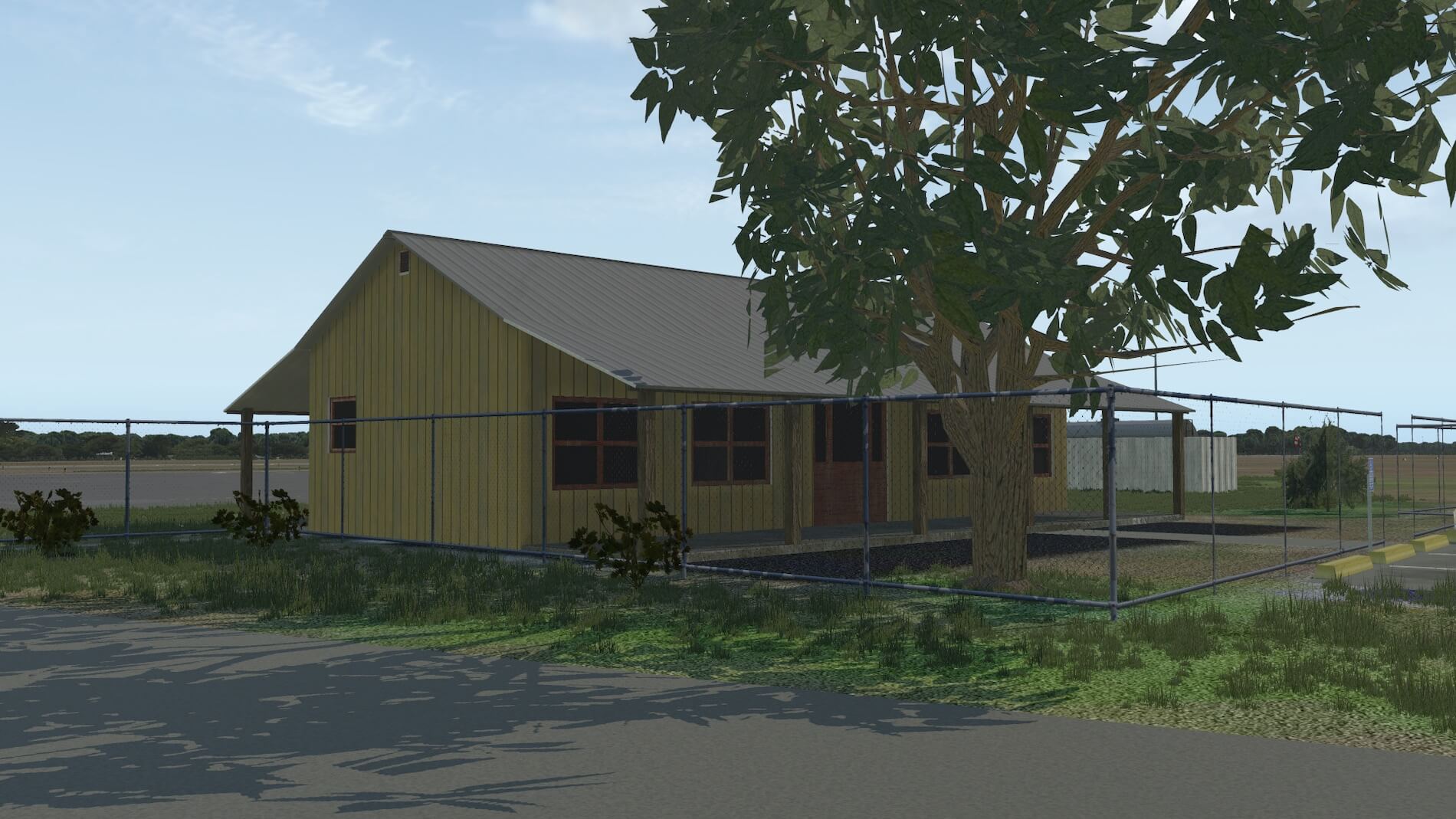 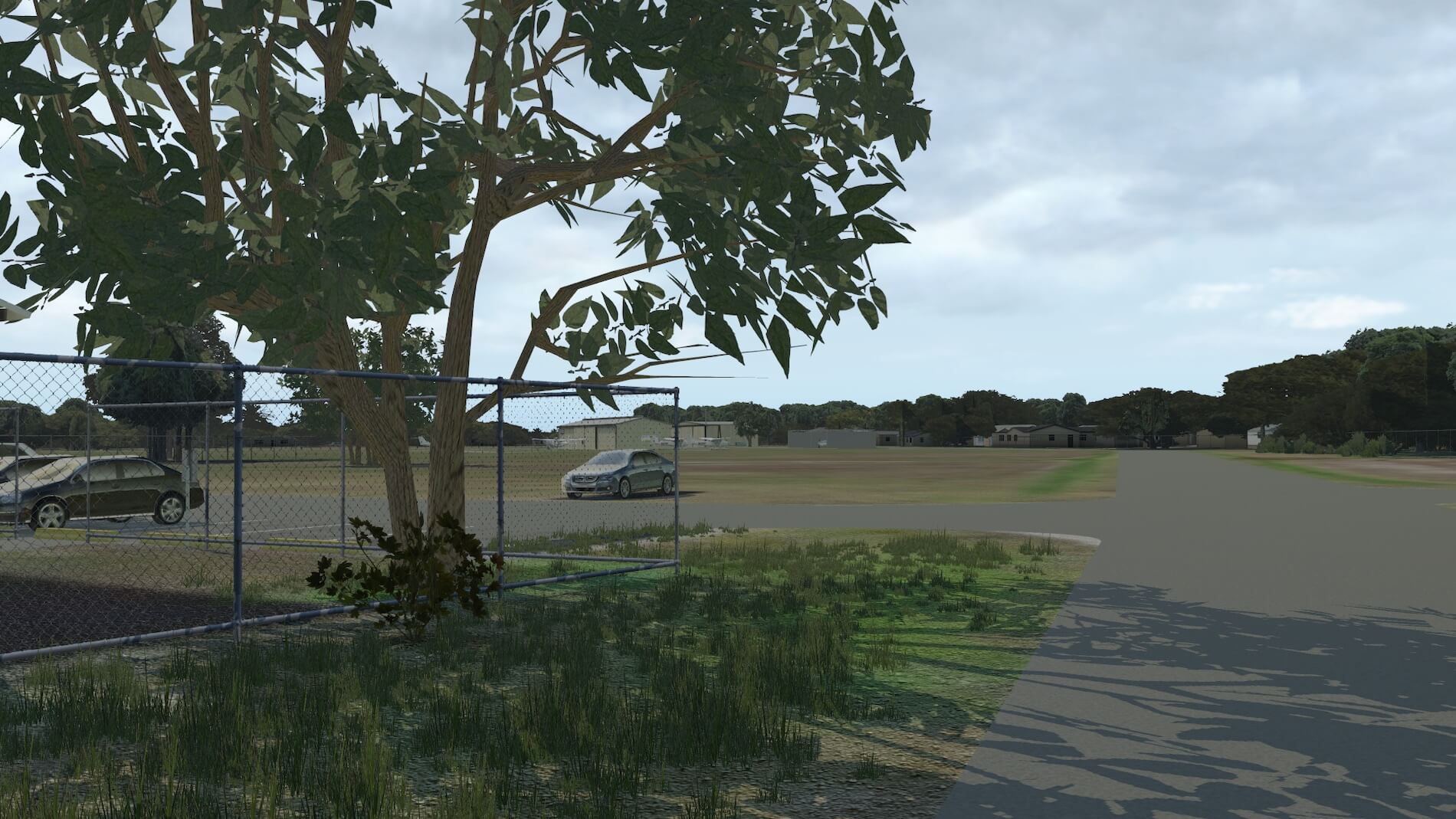 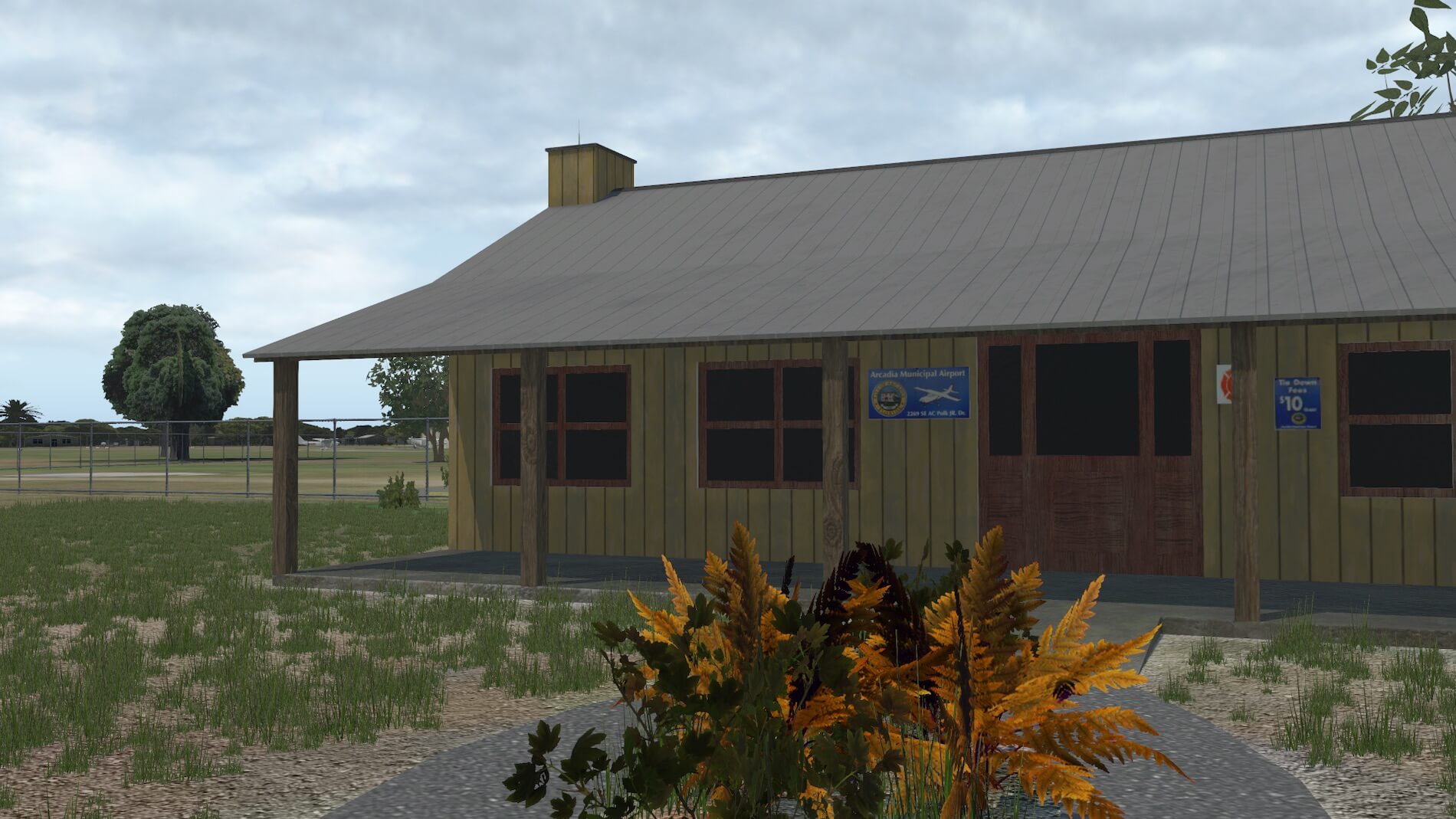 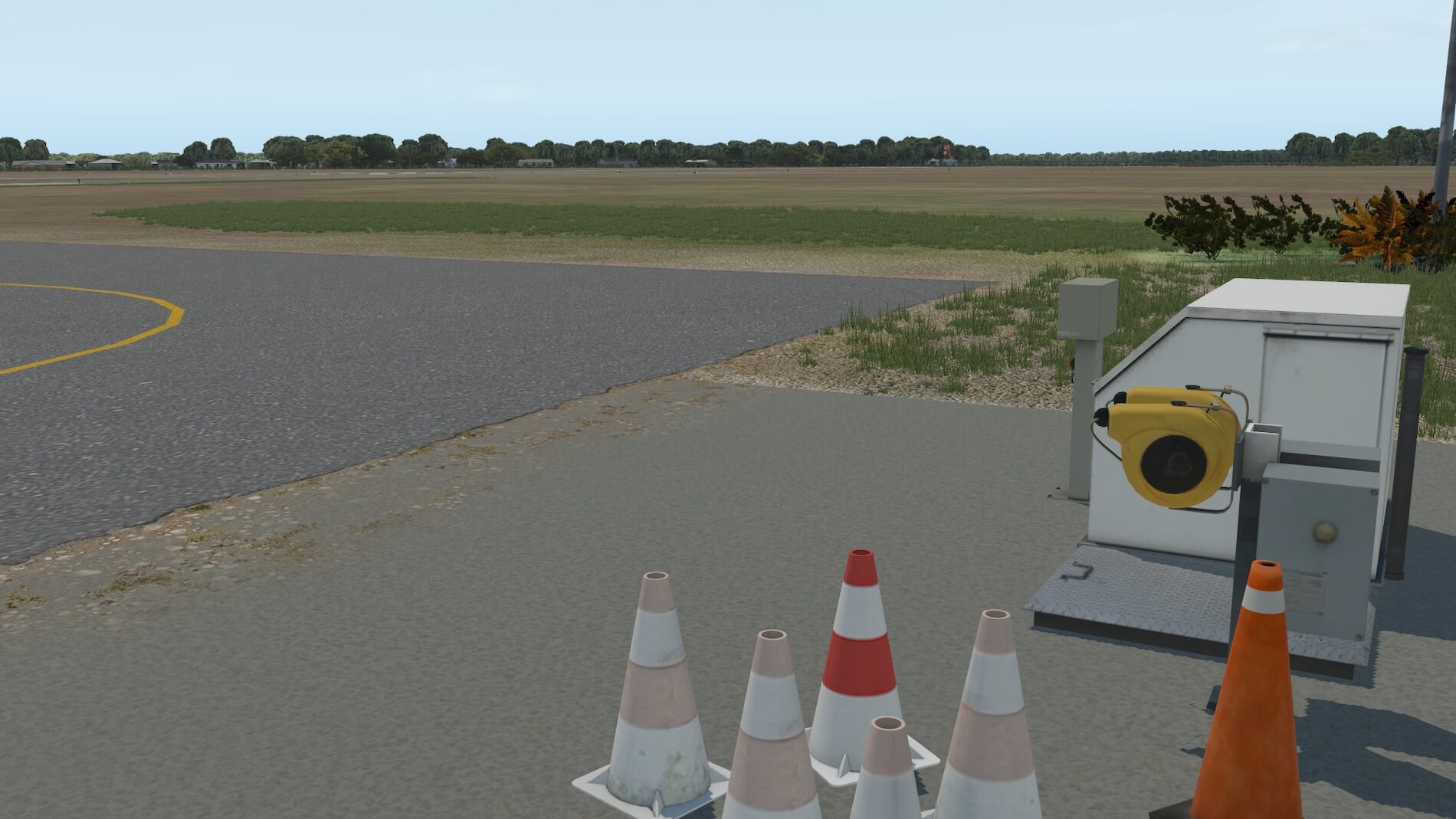 Since I’ve seen so many different photos it’s difficult to say which or what photo is correct. At some photos the tarmac is almost black, on other grey but one thing is for sure, the tarmac has lots of cracks and repairs. The modeled cracks in the airport tarmac with at some places grass in-between, are a bit missing. That said, the simulated grey tarmac in the modeled X06 could be a bit better and/or perhaps covered with better photo real material. After informed DC Sceneries Design about this, the update I received is now more realistic which is good news.

The two large buildings behind the hangar which seems to me hangars too although the hangar doors are closed, are a bit floating at several points. Since I can’t find enough real photo material, I’m not sure how real these are modeled. One thing I know for sure is the added grass all over around. Very nice! It is beautiful, but will cost for sure frame rates. What I said in the beginning, don’t expect too much when exploring X06 since in real it’s also a basic airport. 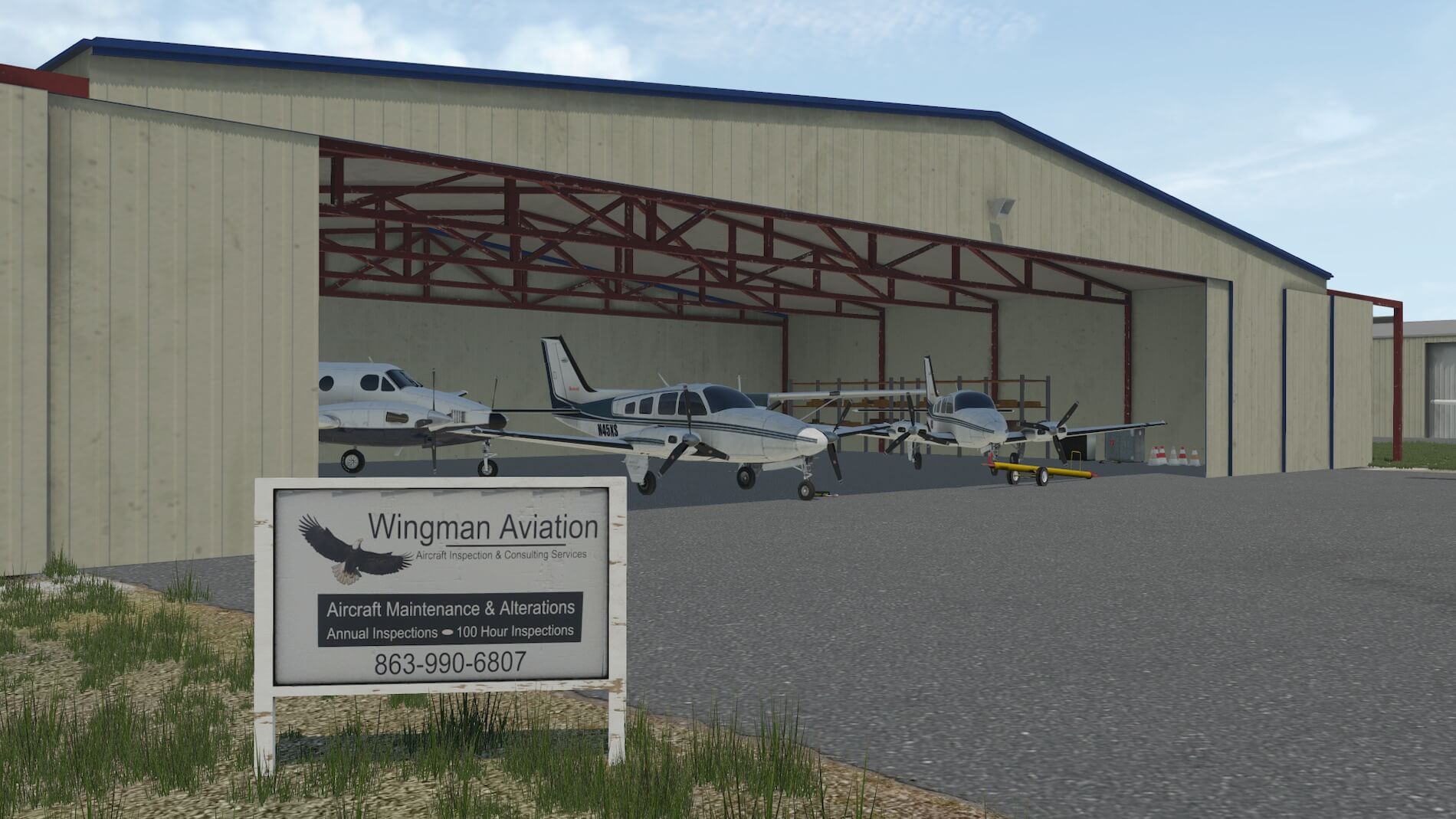 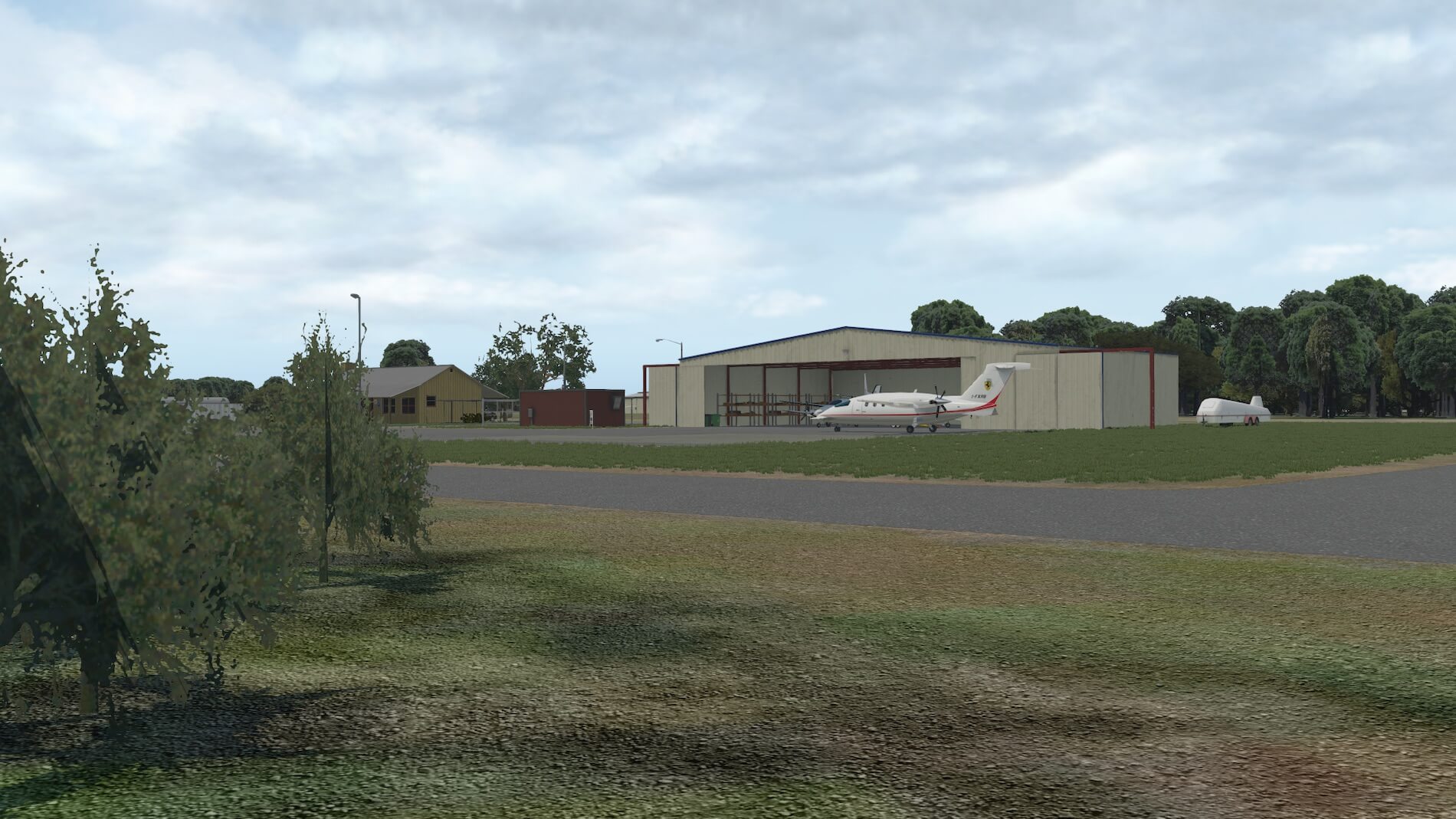 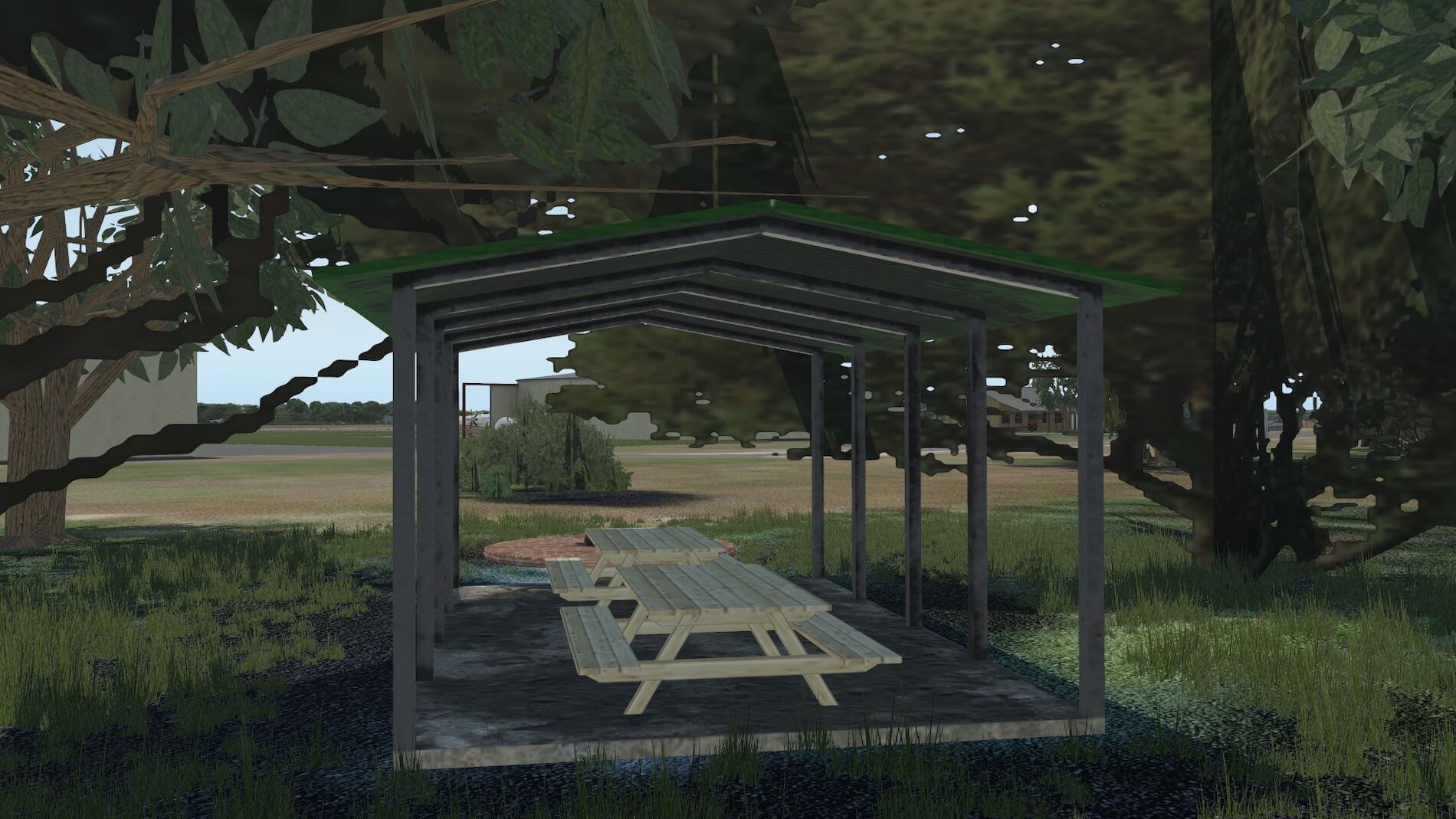 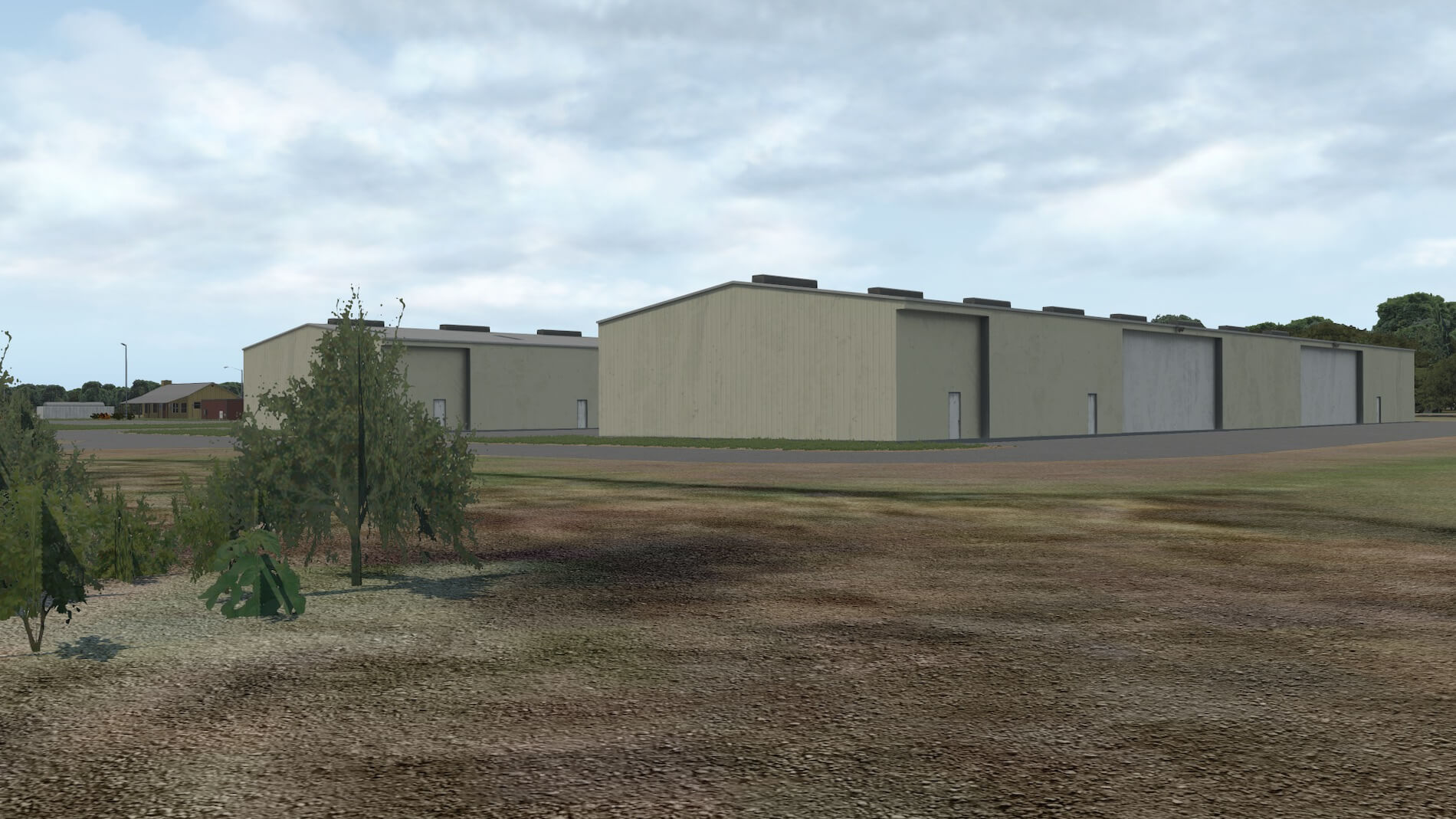 Just a couple of buildings, some bushes, grass, trees, fences and lots of different old and new aircraft. What previously mentioned, the aircraft I see are only modern models, but that’s just a minor detail. By the way; when you don’t like the default trees and bushes, you have lots of options to replace them. You’ve got from Orbx Terraflora or via Stairport SAM Suite extension “GlobalTrees library”.

Situated is the airport office building.
Ok, not really an office, but more a center place for visitors and pilots. Therefore, the office looks more like a regular house, but it’s OK and to me it’s home made. Then nearby the house is the fuel station that looks to me dedicated made for this airport although I’m not sure. What previously said, an update for the apron tarmac would be great since not is has some darker spots from oil leakage perhaps, but further on, the apron tarmac with taxiway textures looks too clean to me, not representing what I’ve seen on the photos.

The ortho texture tiles used with this airport are a bit light, but it could be that the Orbx texture tiles are a bit dark and therefore I notice this difference. On the other hand, I mentioned this before, when you download and use the freeware ortho package from DC Sceneries Design, the colour difference is less and therefore it blends better then with the Orbx tiles. Anyway, it’s up to you what you prefer; Orbx TrueEarth FL or the free package from DC Sceneries Design.

The entrance to X06 is via AC Polk Jr Drive. Remember that X06 is a public municipal airport which means in my humble opinion that you’ve free entrance to the airport office which seems not fully correct when checking out the entrance at the crossing with the Airport Road. There’s a fence modeled and it seems to be closed, so perhaps this fence shouldn’t be at this location. I’ll let the developer know about this additional closed fence. When you and I plan to visit X06, we drive via SE Carnahan Avenue onto SE AC Polk Jr Drive where I spot on my right-hand side some hangars and static aircraft. I think that the tarmac is too clean when referring to real photos from Bing and Google Maps. I could be wrong, but as clean as the grey tarmac is now, is not as real as it gets. Overall, perhaps an update for this area too or? 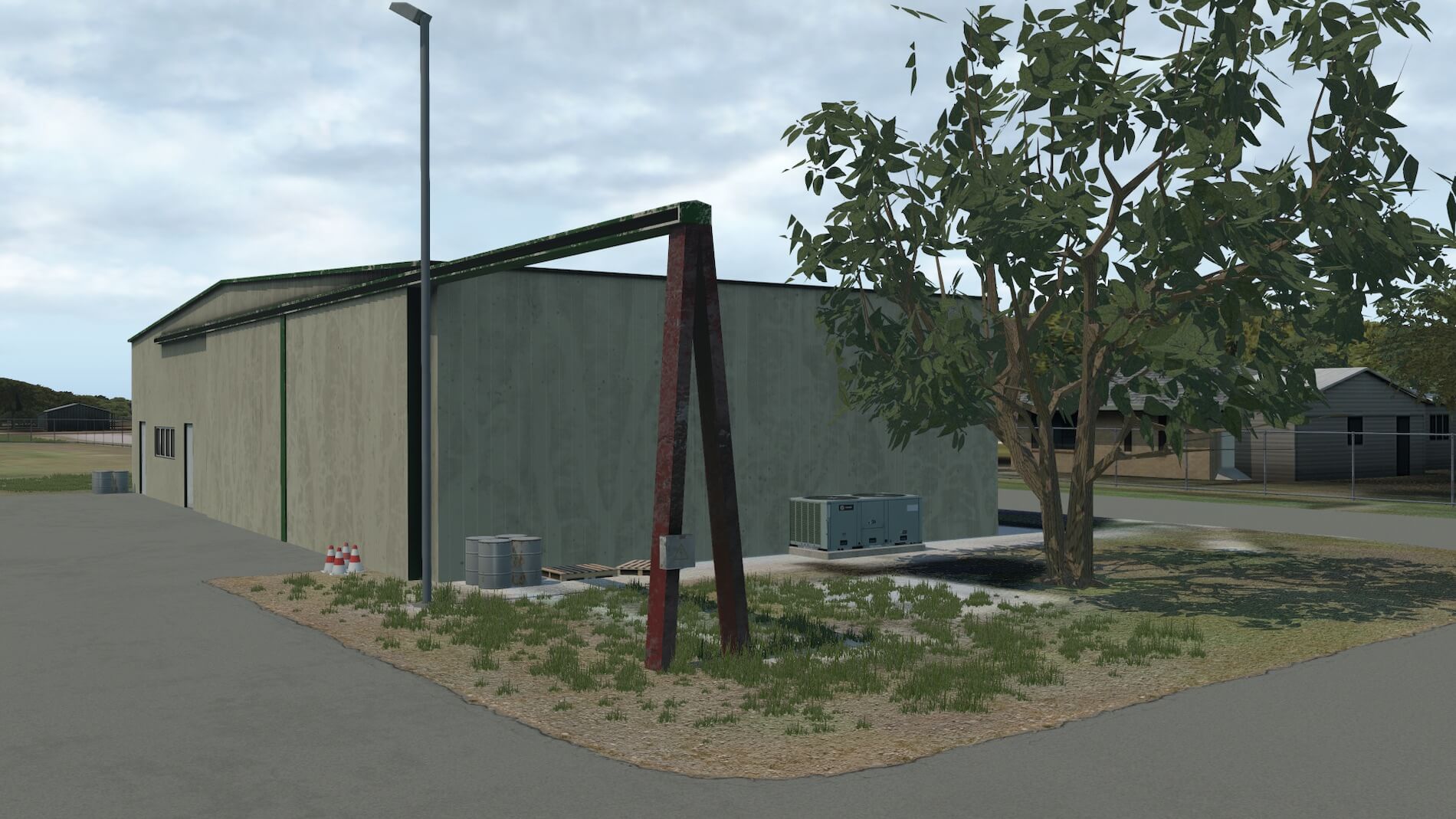 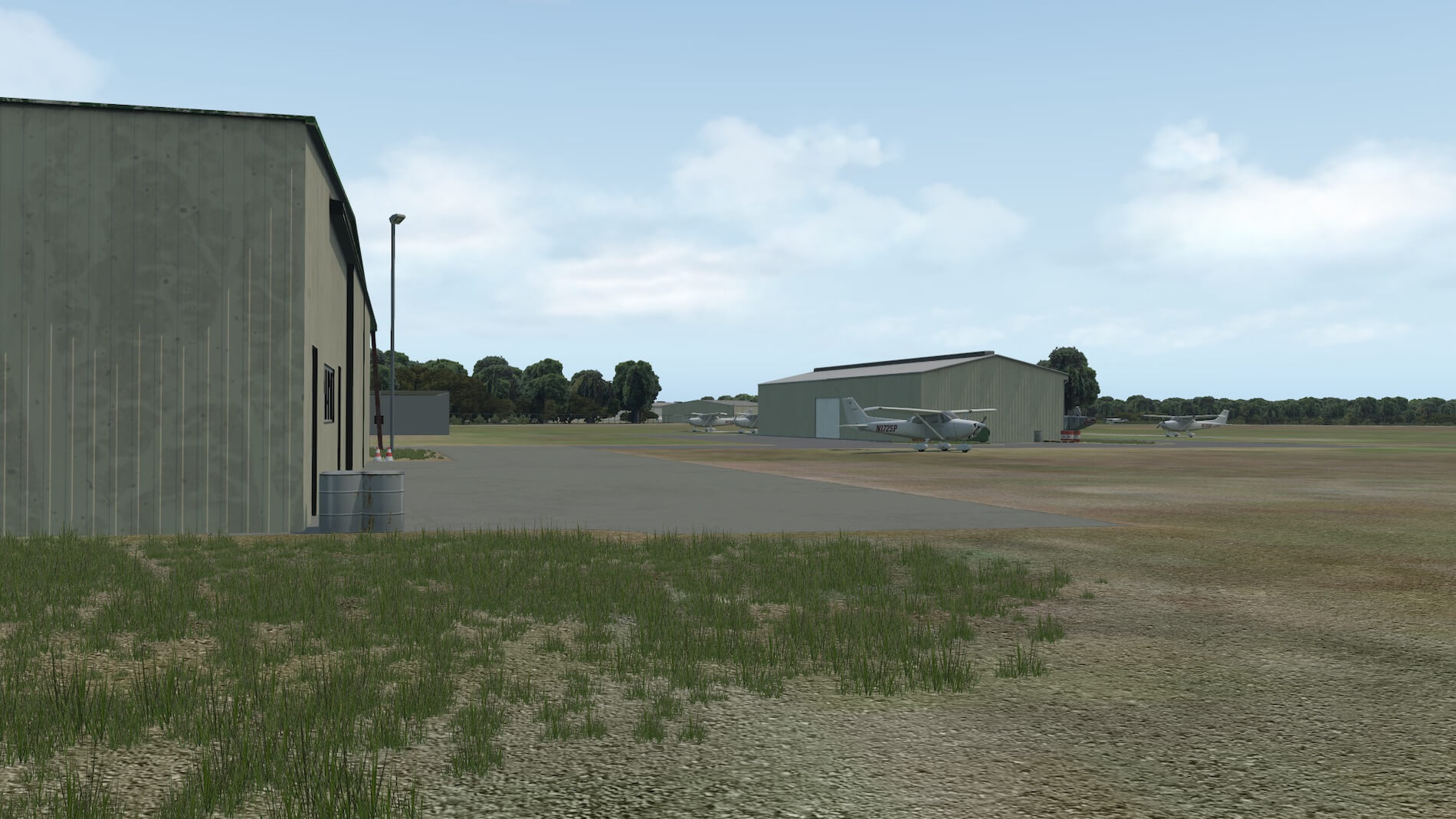 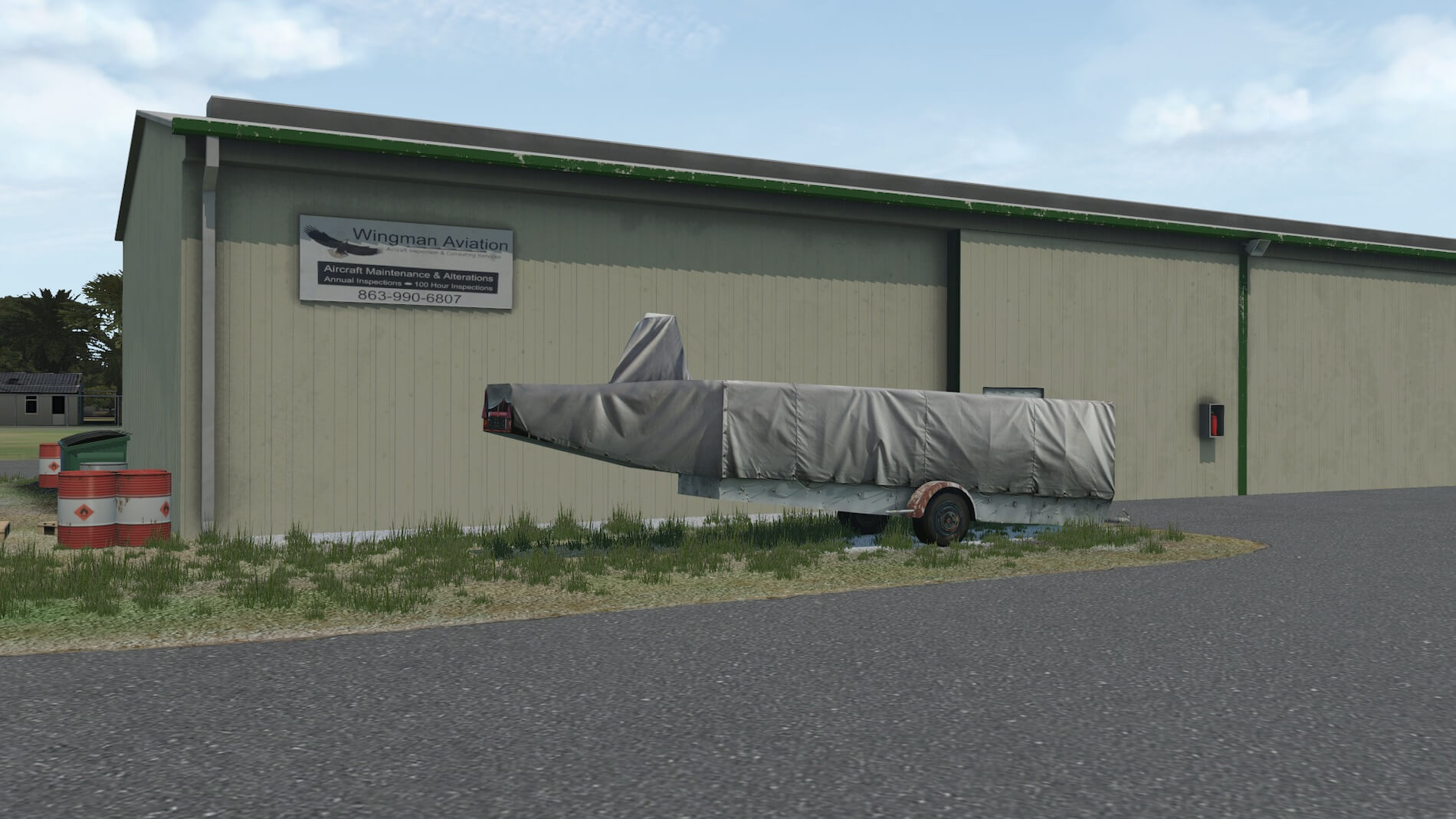 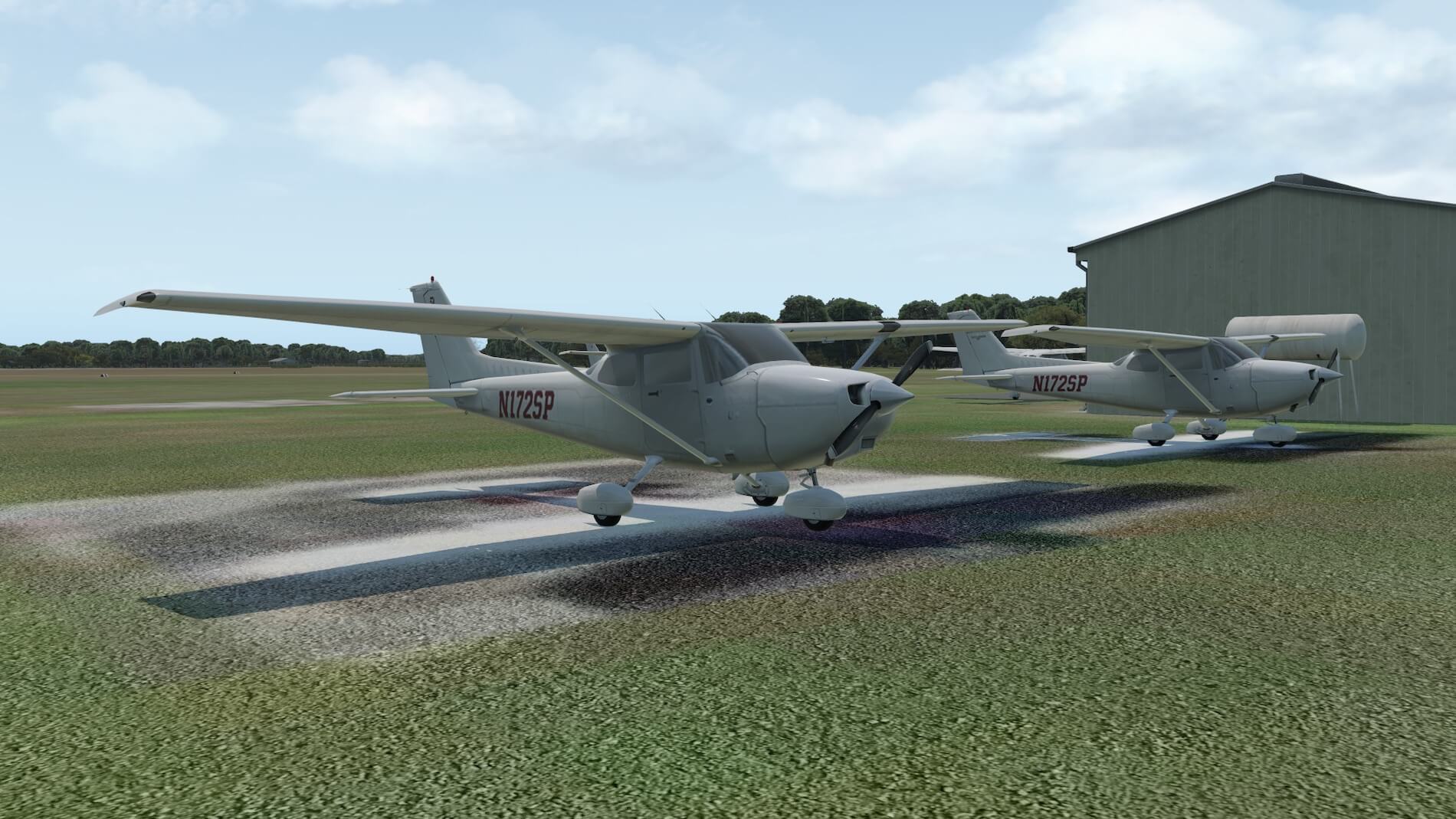 Let me continue with signs and strips on the apron, near the runway and on the tarmac. Looking to signs and strips at the apron, along the taxiway or on the runway itself, I have the idea that at the real Arcadia Municipal airport all is a bit washed out while at the modeled DC Sceneries Design it looks too new or not as weathered as seen on many photos. Not sure if this can be modified or updated, but I do hope that the developer can and will do this. One correction to be made are the letters no each side of the runway. They are realistic and weathered.

As always with add-on airports, the default Laminar Research is either very limited or offers some kind of 3D thus it comes with some buildings. The default Laminar Research X06 airport is basic which means it comes with a paved and turf/grass runway and that’s it. No apron, no taxiways, no nothing. Then adding this DC Sceneries Design package makes it complete and although not perfect yet, it cost you only 12.00 USD. 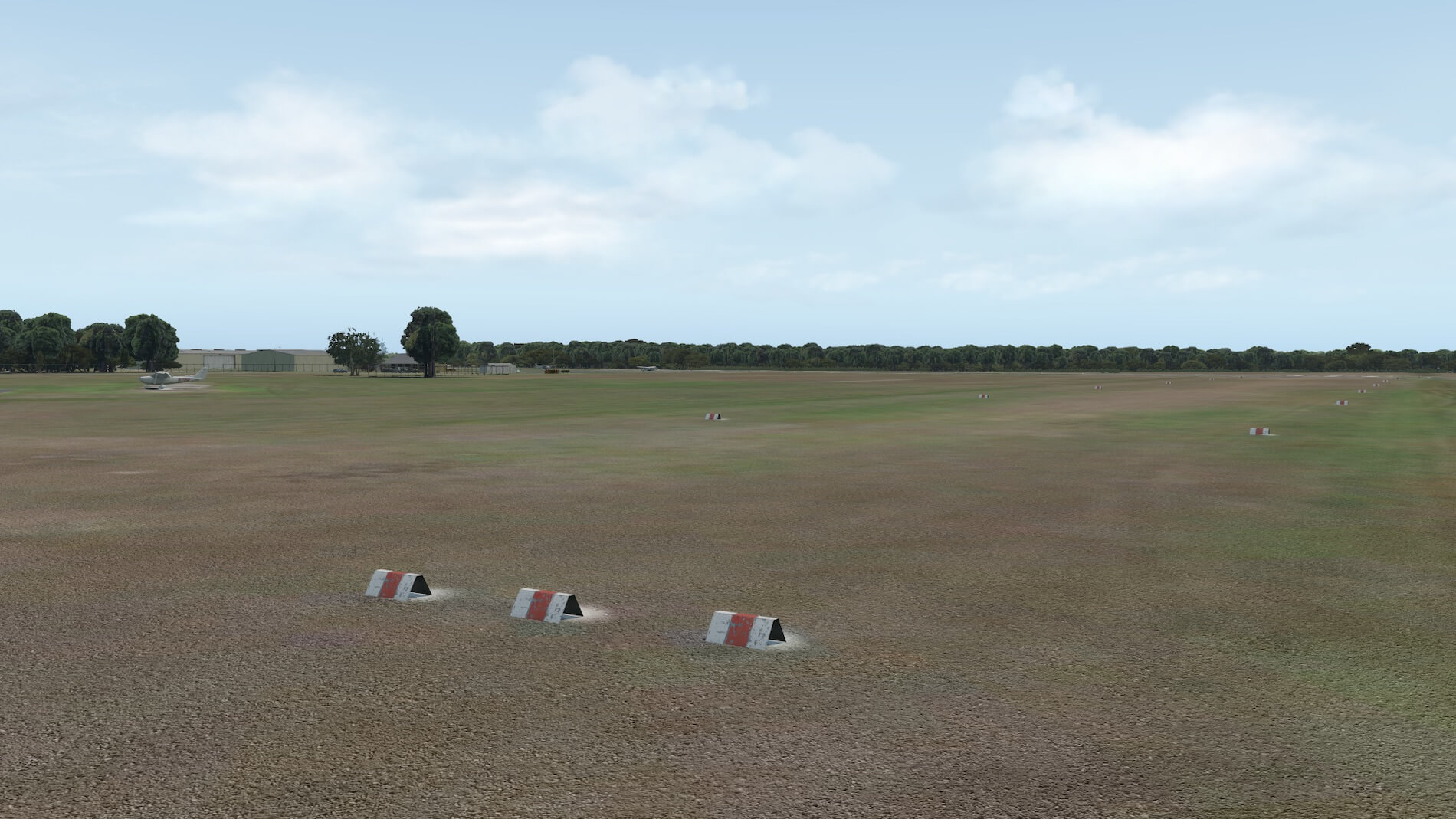 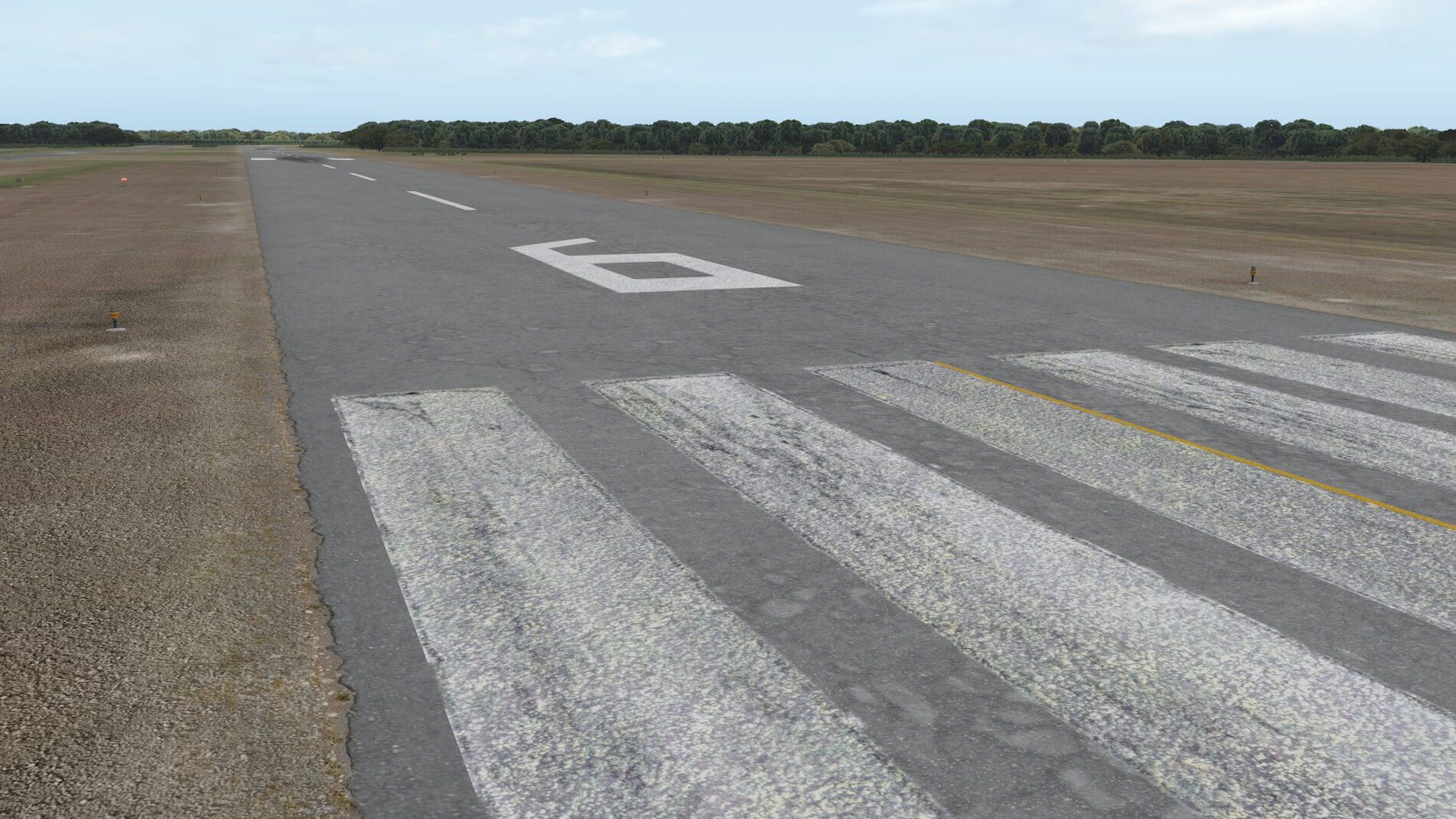 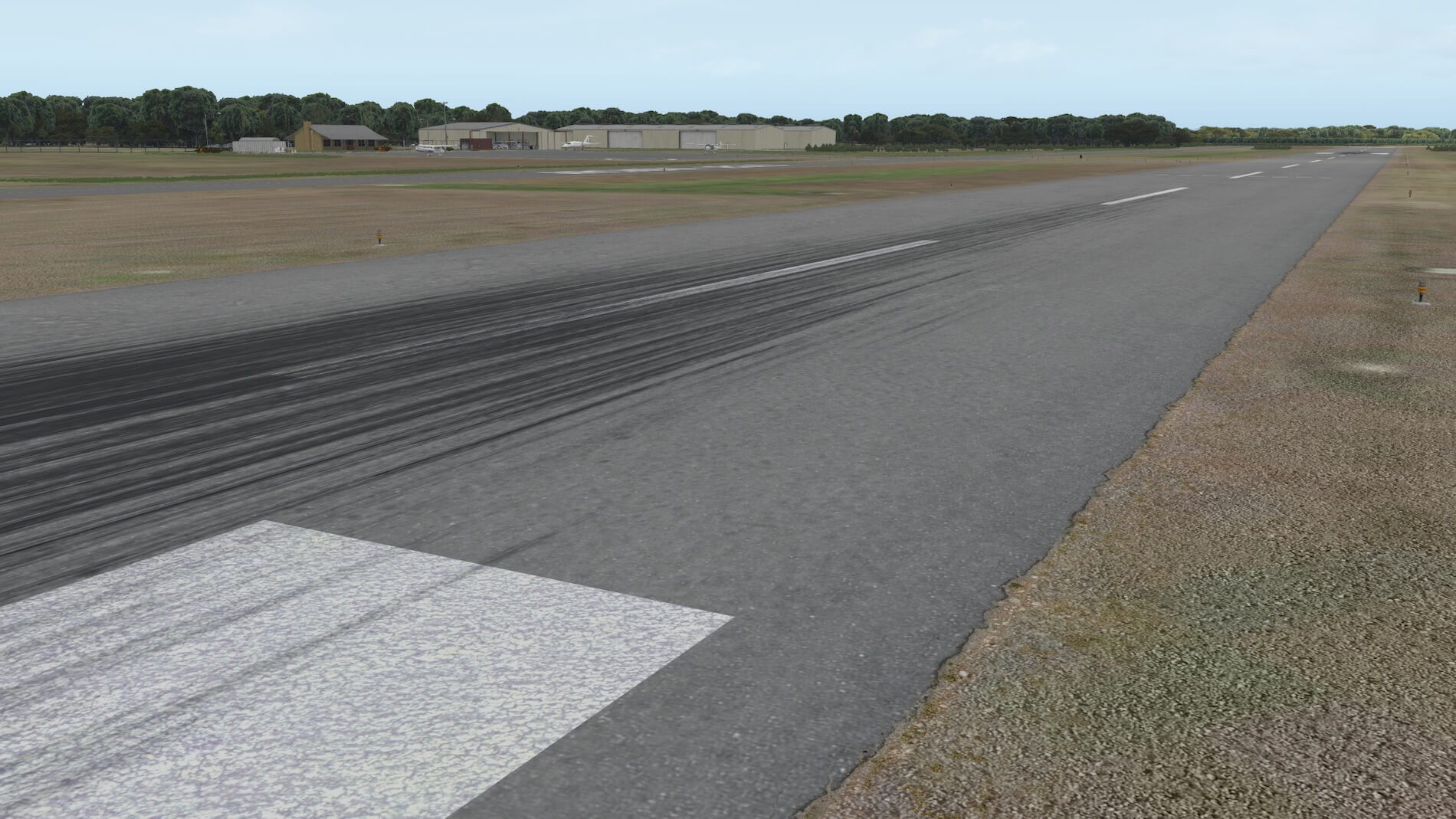 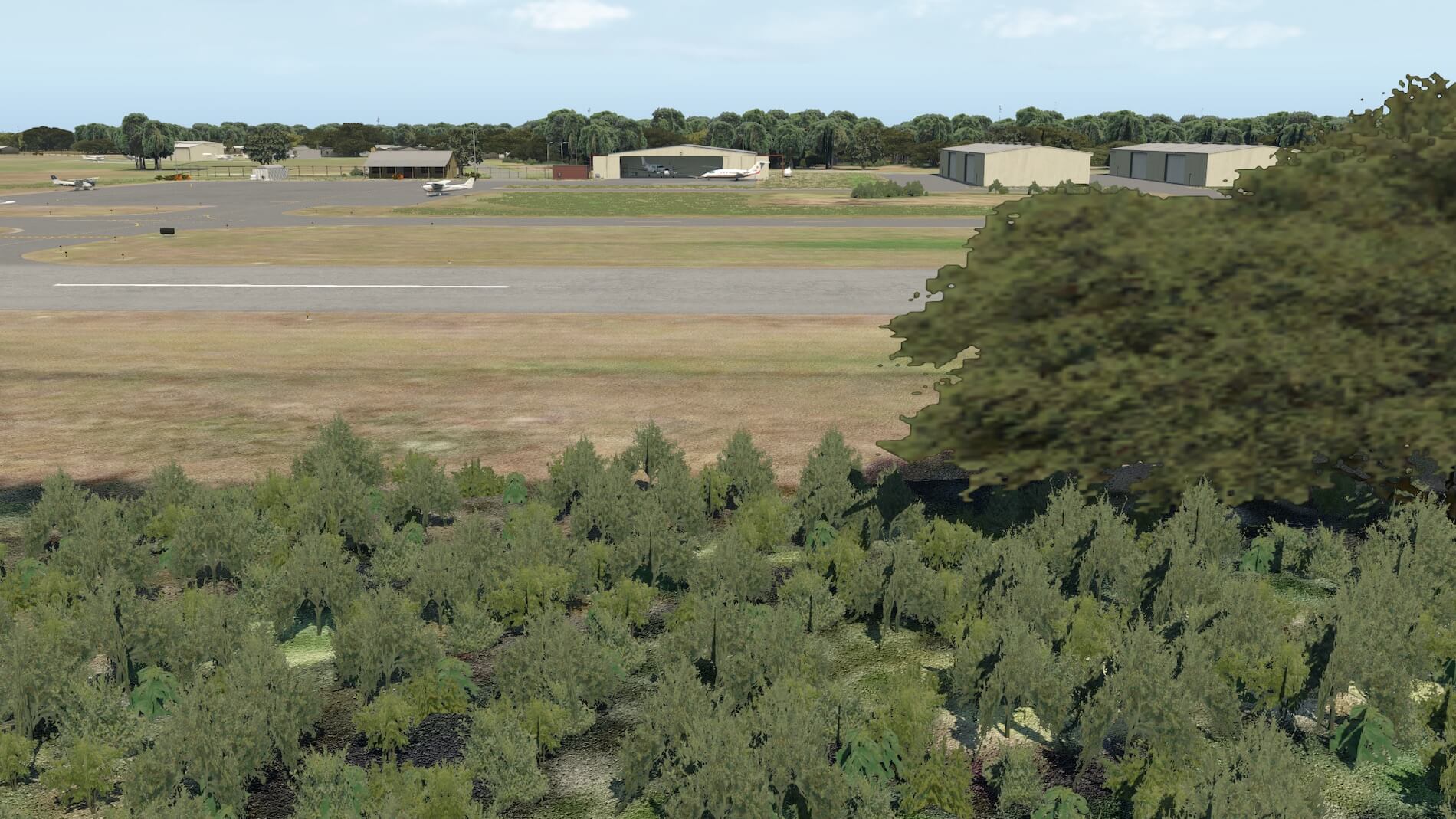 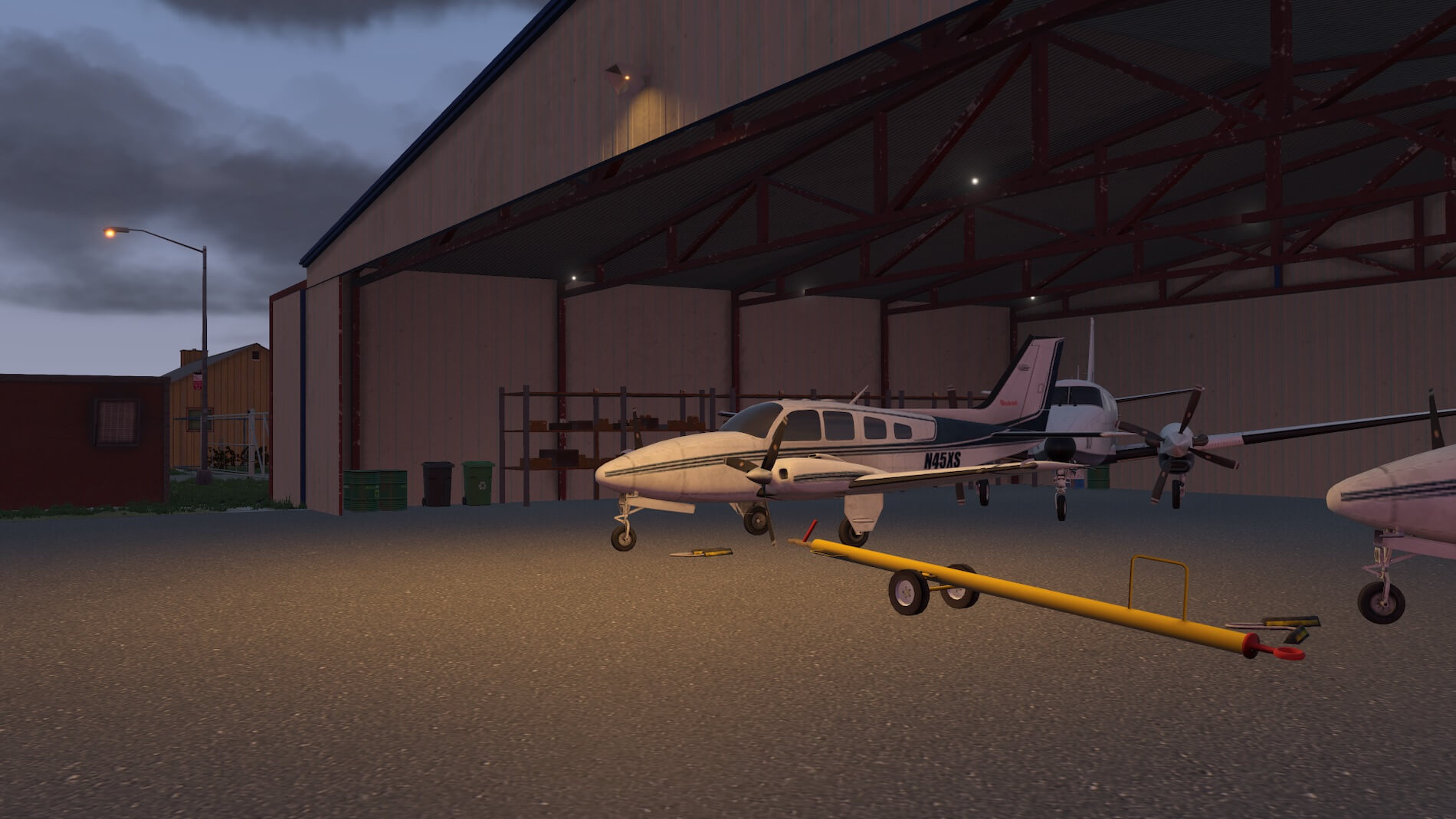 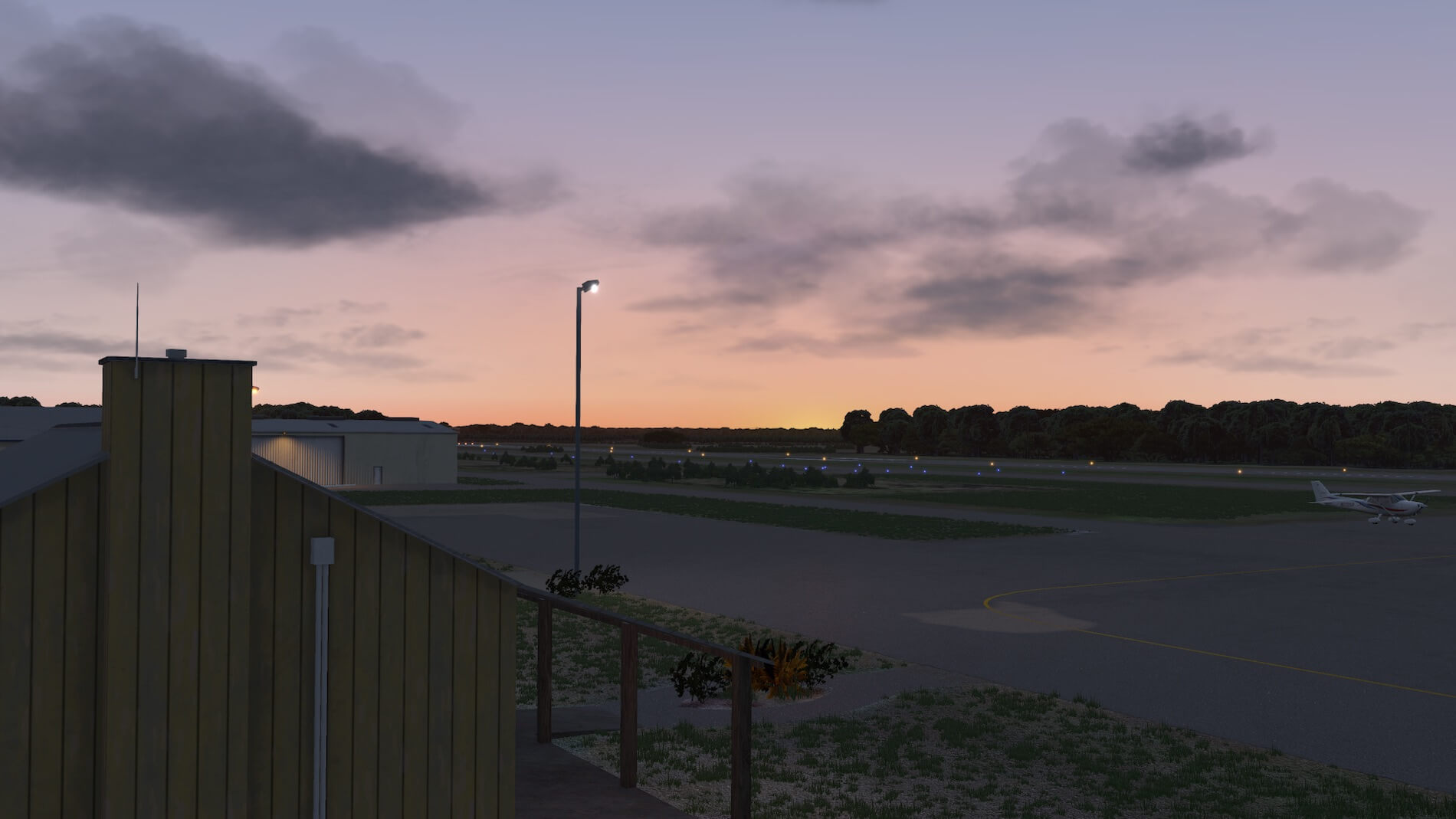 As you can see from the previous screenshots, frame rates aren’t really a problem but keep in mind that when you add Orbx TrueEarth Florida HD too it, that frame rates will logically drop unless you go for the Florida SD package. Although the airport is small, all the trees, grass and other objects always have an impact on your FPS experience.

It took some time to get the right flow to review this tiny Floridian municipal airport, but at the end it was fun. It cost only 12 USD and available via X-Plane.Org which is not much and therefore it’s also fair to say that Arcadia is more or less a basic airport. The real Arcadia doesn’t offer much impressive buildings nor does this modeled airport. Lucky that it comes with ortho textures although I have to say that I’ve got no idea what the ortho texture quality is and from which source it’s taken.

More information and buying details can be found at the dedicated X-Plane.Org store page and what said before, it’s as of this writing only 12.00 USD. Before I miss it; the review is based on airport version 2.0 which was released on October 20th 2020.