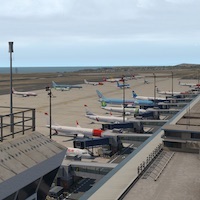 When we say Canary Islands, we say nice temperatures, nice landscape, great food, but also a well modeled Tenerife Sur Airport by Digital Design and JustSim. Your personal reporter Angelique van Campen took the plane and visited the airport as well as the surrounding area.

According to Angelique; “Did I cover everything of Digital Design’s GCTS? I hope so because the more I look around, the more I see and sometimes I think; “I haven’t seen that before?” and then I think “It’s a much bigger area then initially thought” and so on. I found it worth my time to review this airport.”

That said, she tried to find something in every corner, she tried to find out if the developers had enough eye for all those tiny details you may expect from airport developers and she can only conclude; they had! Many tiny details are included. Ortho ground textures are included too for a large area around the airport. I can only say to you … read her in-depth review.