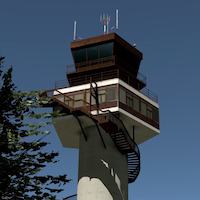 Your personal reporter and reviewer Angelique van Campen took a virtual flight from EHAM Amsterdam Schiphol International to Granada International Airport, modeled by LOGO Projects. Although this wasn’t a long flight, it was worth her time and investment exploring Granada XP.

According to Angelique “For some reason I had a lot of fun exploring this small to medium size Spanish airport. I think it had to do that I knew that only one person modeled it, living in Barcelona, Spain. And yes, it’s not a large airport, but even this small one has it’s own charme.”

She continues “Combine this with the freeware SpainUHD ortho textures, and you’re ready to explore Spain in general. And for those simmers who like to fly under VFR rules, it’s even more fun making a stop at the modeled LOGO Projects Granada.”

And now it’s up to you to judge. Check out Angelique’s her LOGO Projects Granada for XP review at X-Plained.Com.