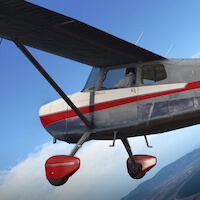 We’re pleased to inform you that Alabeo has released another funny GA aircraft for X-Plane 11, the C170B. As soon as we get it in our hands, we’ll give it a try and I think it will be fun flying this tail dragger model. Although the cockpit may look basic, it is as it was and I’m quite sure you’ll still find real C170B models flying around. It was a GA model produced by the Cessna Aircraft Company between 1948 and 1956.

In 1952, the Cessna 170B was introduced, featuring a new wing tapered outboard of the flaps, incorporating dihedral similar to the military version. The B model was equipped with very effective modified Fowler (slotted, rearward-traveling) wing flaps which deflect up to 40°,[1] adapted from the C-305/Bird Dog, a wing design that lives on in the Cessna light singles of today. The 170B model also included a new tailplane, a revised tailwheel bracket, and other refinements over the 170 and 170A. It was marketed in 1952 for 7245 USD.

More information can be found at the dedicated Alabeo web page.