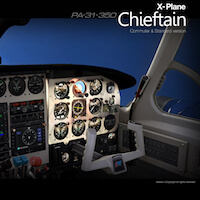 On behalf of Alabeo, we’re pleased to inform you that Alabeo has released the Chieftain PA-31-350.

The Piper PA-31 Navajo is a family of cabin-class, twin-engined aircraft designed and built by Piper Aircraft for the general aviation market, most using Lycoming engines. It was also license-built in a number of Latin American countries. Targeted at small-scale cargo and feeder liner operations and the corporate market, the aircraft was a success.

It continues to prove a popular choice, but due to greatly decreased demand across the general aviation sector in the 1980s, production of the PA-31 ceased in 1984. At the request of company founder William T. Piper, Piper began development of a six- to eight-seat twin-engined corporate and commuter transport aircraft in 1962 under the project name Inca. The type, now designated the PA-31 and looking like a scaled-up Twin Comanche, was officially announced in late 1964 after its first flight on 30 September that year.

But even more important … which features can be expected?

Note: This aircraft is only for X-Plane 10.40 (or higher). More information can be found at the dedicated Alabeo web page.