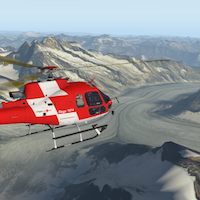 And Who’s Next after X-Plained member FreemanTP?

But first of all, we’re pleased with the dedicated X-Plane 11 Switzerland screenshots from FreemanTP. According to FreemanTP “these two screenshots where made during my Eurocopter AS350 flight testing in combination with X-Plane pb6, but I’ve got some more information for you:

The first screenshot are with the Aletsch Glacier, Switzerland and Ortho4XP at the background while his other screenshot shows you during the evening hours the City of Basel, with Mulhouse airport (LSZM) in the background with X-Plane autogen scenery.

On behalf of the X-Plained team, many thanks Michael for taking the time to make them for us and to send them over. And now … who follows?