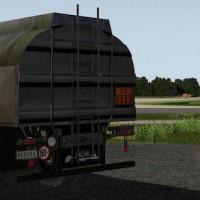 This time another project from SketchUp guru Marc Leydecker aka Belga12345.

No no, this time no screenshots of further implementations of KRIC, neither cockpit hardware interface tutorials. According to Marc “By know I’m stressed enough that good photos are the key to scenery development. That said, on a Friday night, I stumbled on an auction that had a Military Mercedes Refueler up for auction. He couldn’t resist to make some photos which are, as I may say so, just gorgeous and, very important, taken at the right angles. Couldn’t resist it!”

These tankers were popular in the early 1980’s among Europe’s NATO members. Do I have a use for it within X-Plane? Not really … So 12000 polygons later, the truck is done and comes in a static and animated version. The latter has working high-front beams and tail lights provided HDR is ON, lighted fuel control bays, animated fuel control bay doors and working flashing lights. Curious? Check out these exclusive screenshots made on behalf of Marc Leydecker.