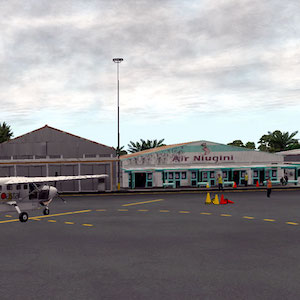 Madang, Papua New Guinea is this scenery package is a replica 3D to the original one, updated to the year 2015. This version is for X-Plane 10 and tested with X-Plane 10.42 in Windows 64 bits.

Madang Airport (IATA: MAG, ICAO: AYMD), is an airport located in Madang, Papua New Guinea. During World War II, occupied by the Imperial Japanese Army in January 1943, as a forward operating airfield for aircraft based at Wewak. Later expanded to a 3250′ x 240′ runway with a single taxiway with 31 revetment areas. Bombed by the allies during late 1943 and early 1944 the airfield became unserviceable.

The “yxz_CDB_Mesh” package is now included in the ZIP file.