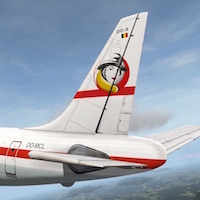 Flight simmers who are a favourite of Marc Leydecker’s aka Belga12345 airports, and who also bought Michael Wilson Douglas DC-8 Series, for those flight simmers we’re having another surprise after the release of the NAPS DC-8-61 livery namely an exclusive Belga12345 painting.

Yeah, this is fun isn’t it!
Your favourite Douglas DC-8 aircraft in Belga12345 livery. I think I can speak not only on behalf of Marc Leydecker and myself, but for all those X-Plane simmers who love to fly Michael Wilson Douglas DC-8-61 Series. Marc, many thanks for this Belga painting.

Curious how this Belga12345 painting looks like?
Then you must check out this exclusive screenshot link we’ve created for you and of course, only for registered users, the Belga DC-8-61 package. For the package, log in and go to the downloads menu item.