Can any iMac handle X-Plane 10?

Without doubt that every iMac can run X-Plane 10, but you could add to this …. what hardware do you need to run X-Plane 10 smoothly?
That isn’t easy to answer, By the way, it also depends what your preference is and thus the overall FPS (Frame Rates per Second). I’ll try to answer that as far as possible, but it will only be applicable to those who have a Mac computer with an Intel based CPU. As it turns out, I do have Apple’s bootcamp installed, so I’m also able to run a native version of Windows 10 Professional and thus the Windows X-Plane 10, but my preference is Mac OS X and MacOS.

Since I’m not sure if the Apple’s bootcamp provides the same performance on a real PC with Windows 10 Professional, for the moment, I refer to offer you only X-Plane 10 for a Mac OS.

Ok, what do I have at my X-PLane office?

Currently I own two Mac’s. Number one is the one I’m dealing with this article, which is an iMac, Late 2013, with an Intel i7 Quad Core 3.5Ghz and a built in turbo boost to 3.9Ghz. Anyway, the iMac has 32GB 1600Mhz RAM, a Nvidia GeForce GTX780 M (from Mobile) with 4GB GDDR5 memory and last but not least, a build in oneTB SSD with MacOS Sierra although I have to admit that this is Sierra’s final release candidate, but it’s behavior is stable. Besides the build in one TB SSD, I do have connected via Thunderbolt cables three additional SSD drives for El Capitan, Mavericks and Windows 10 Professional. Number two is a MBP (Mac Book Pro) Mid 2014 and actually, I do have another iMac, but I hardly use it since it has an Intel i5 CPU and an ordinary SATA HDD. That doesn’t mean by the way that you can’t do anything with this iMac. But, you’ll read that in this article, everything is possible, but with reduced Rendering Options settings. Perhaps that brings me to an idea to write another article about this older iMac and it’s X-Plane performances. Ok, on the to-do-list!

Well, let’s put it like this. I wasn’t really satisfied with my previous iMac since, I felt the iMac was running out of memory. Although that iMac had 16GB, I felt that my AMD 2GB graphics adapters memory wasn’t enough. Perhaps it was just me, hoping to have a superpower Mac.

Ultimately, I decided to go for the iMac, Late 2013 as described above. Right now while writing this, I’m seeking for a new iMac, but the current 27 inch iMac model has a Retina 5K display which is nice, but not where I’m looking for besides a couple of more improvements. Right now it’s not worth the huge investment so I can’t do anything else then just wait till Apple releases a new powerfull iMac. Problem with these iMac models is that you buy it with the hardware as it is. With a Windows PC, you’d also be able to add a different graphics adapter and other elements that you thought are necessary. You can’t do that with an iMac. You buy what Apple offers and except for some small changes in hardware configurations, that’s it. Nothing more is possible. Whether you like it or not.

Basically, you have one choice. Period! On the other hand, I had a good experience with mid 2011 iMac, and after consulting Ben Supnik and Austin Myer, I decided to go for the above hardware configuration thus the iMac Late 2013. What I understood from Ben was that having two graphics adapters installed in your Mac, which is possible with the Mac Pro, is of no use for X-Plane, since X-Plane 10 uses only one GPU. He also mentioned that the CPU speed is very important for X-Plane 10.

And does this Late 2013 iMac do what I expected?
I’m very satisfied, although a 4.5Ghz or 5.0Ghz would be overwhelming, but let’s be honest, what I have right now works perfectly for me. For my daily X-Plained news, I don’t need anything more. For writing columns I don’t need either more. For writing reviews without testing it in X-Plane, I don’t need it either. But then you could ask me, “why do I need this particular iMac?”

Well, one reason is the high performance needed to fly X-Plane 10 with acceptable frame rates. With “acceptable” frame rates I mean 30 FPS (Frame Rates per Second) or perhaps 35. Some might say that even 25 FPS is enough, since our eyes detect little or any difference when the frame rates are higher. I have my doubts about those 25 frames, but it’s true that 30, 35 or 40 frames don’t make the difference anymore. What counts is the smooth operation of X-Plane while you’re taxiing to the assigned runway, taking off, climbing out, cruising, descending or planning a final approach. During those events it’s not so important how many frame rates XP produces, as long as things are running smoothly.

The following screenshot shows my current X-Plane 10.50 rendering options settings, while running Apple’s latest OS; MacOS Sierra Public Beta 7. Could I set certain things higher or should I set things differently? If you think so, feel free to comment on this column. Serious suggestions are not only welcome to me, but are also interesting to others. 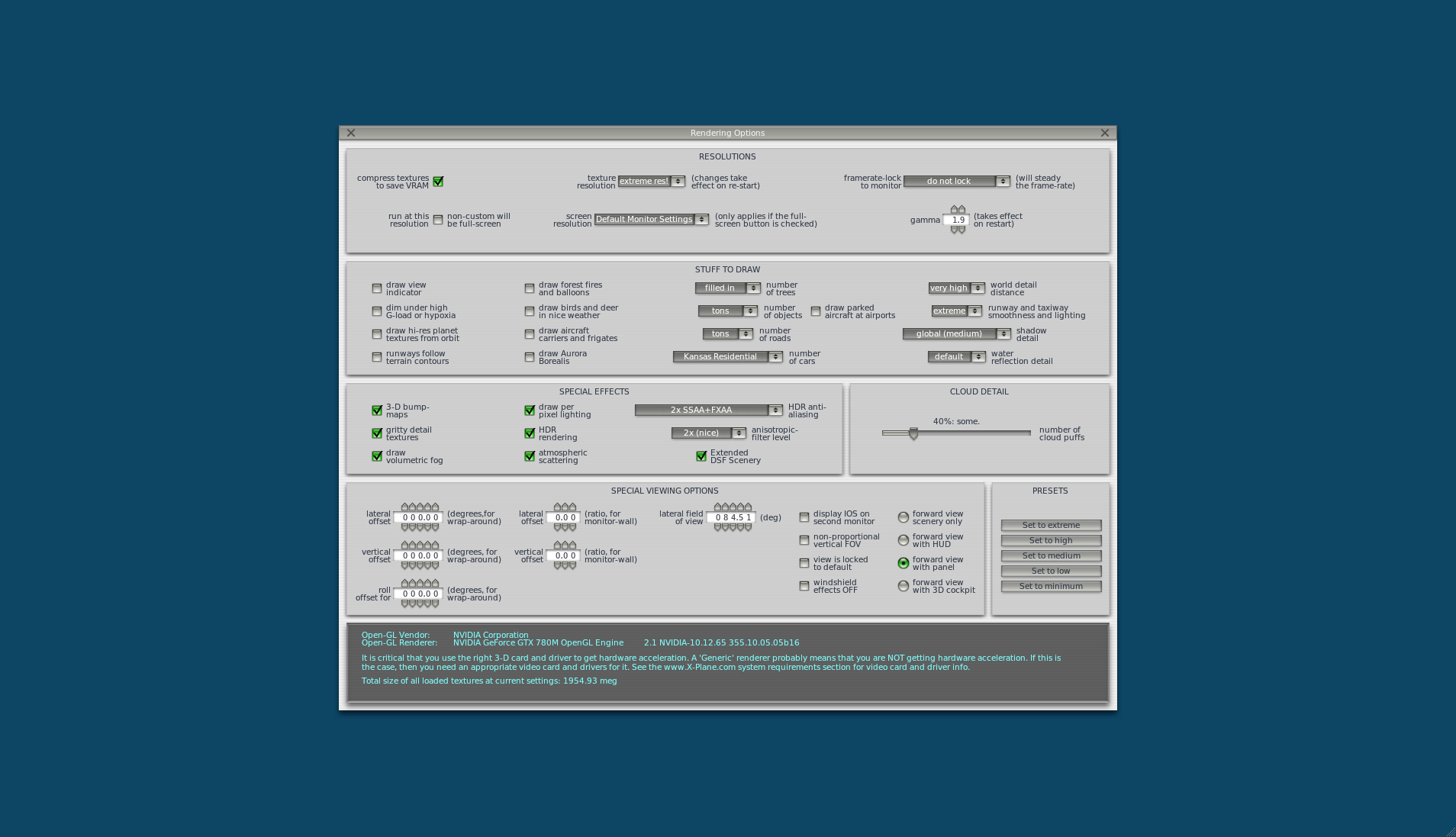 With these rendering settings I can do what I want and hardly be concerned about frame rates. If I wanted to, I could get 19.90 frame rates. That’s not difficult, because even this iMac has its limitations. 19.90 FPS isn’t always distracting you when you’re taxing or flying. Most of my review flights are based on different types of aircraft, ranging from GA to commuter to the large jets. It also depends on what you see, are you sitting in a 3D cockpit, is it a complex airport you’re taxiing or flying at 20.000 feet and so on.

Each aircraft type is not necessarily like the other and that also implies different frames rates for each add-on aircraft. When you’re dealing with a complex aircraft that has EFIS, EICAS or ECAM, FMS and more of those simulated systems, a lot of CPU power is needed to calculate behavior and this could possibly lead to lower frame rates than you had expected. To return to reasonable frame rates you’d have to reduce your rendering options. Nothing new, right? But, even small GA aircraft could be complex and although being small models, they can still reduce your frame rates.

In other words, add-on freeware and payware aircraft could be a pain …….! 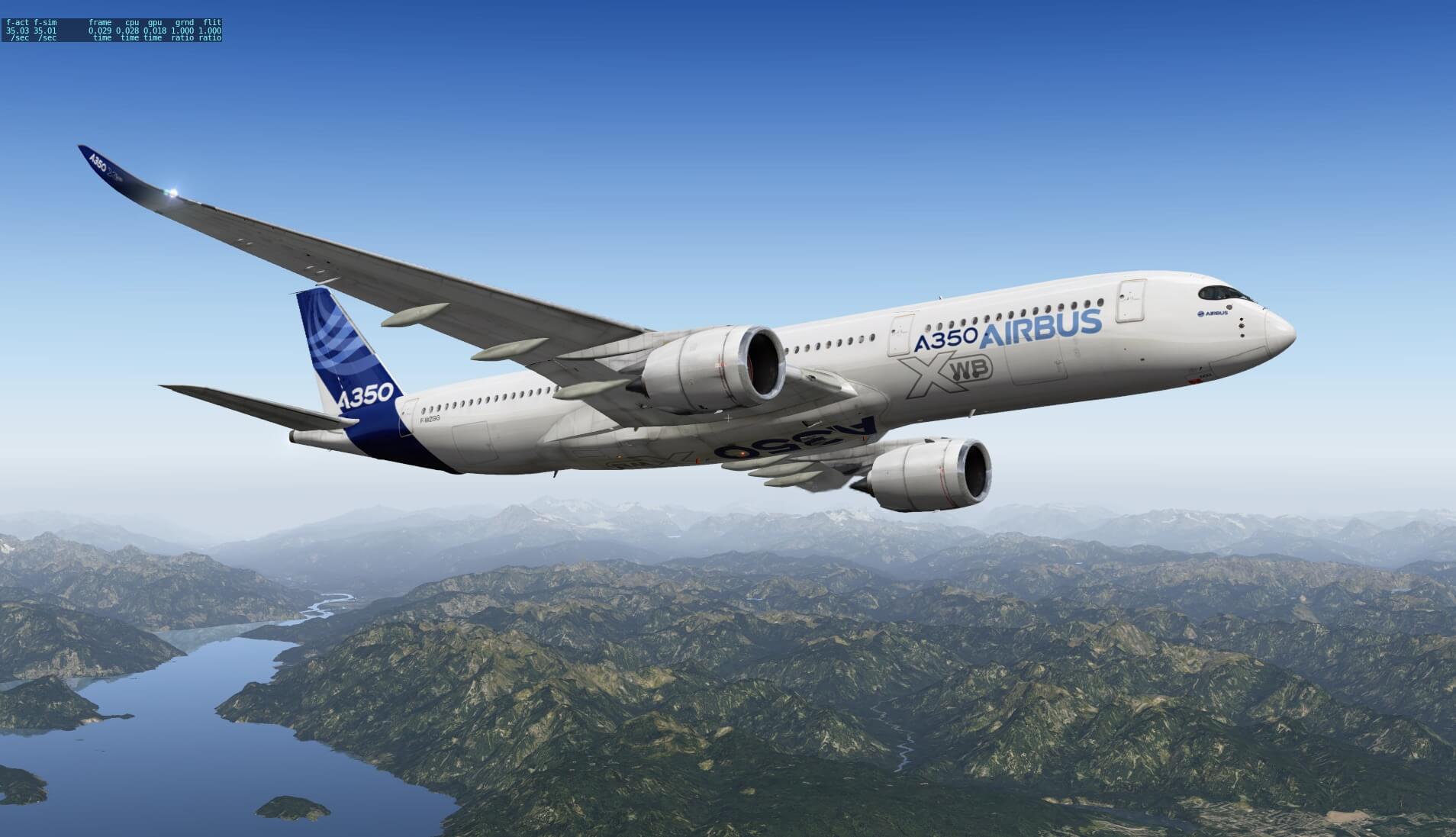 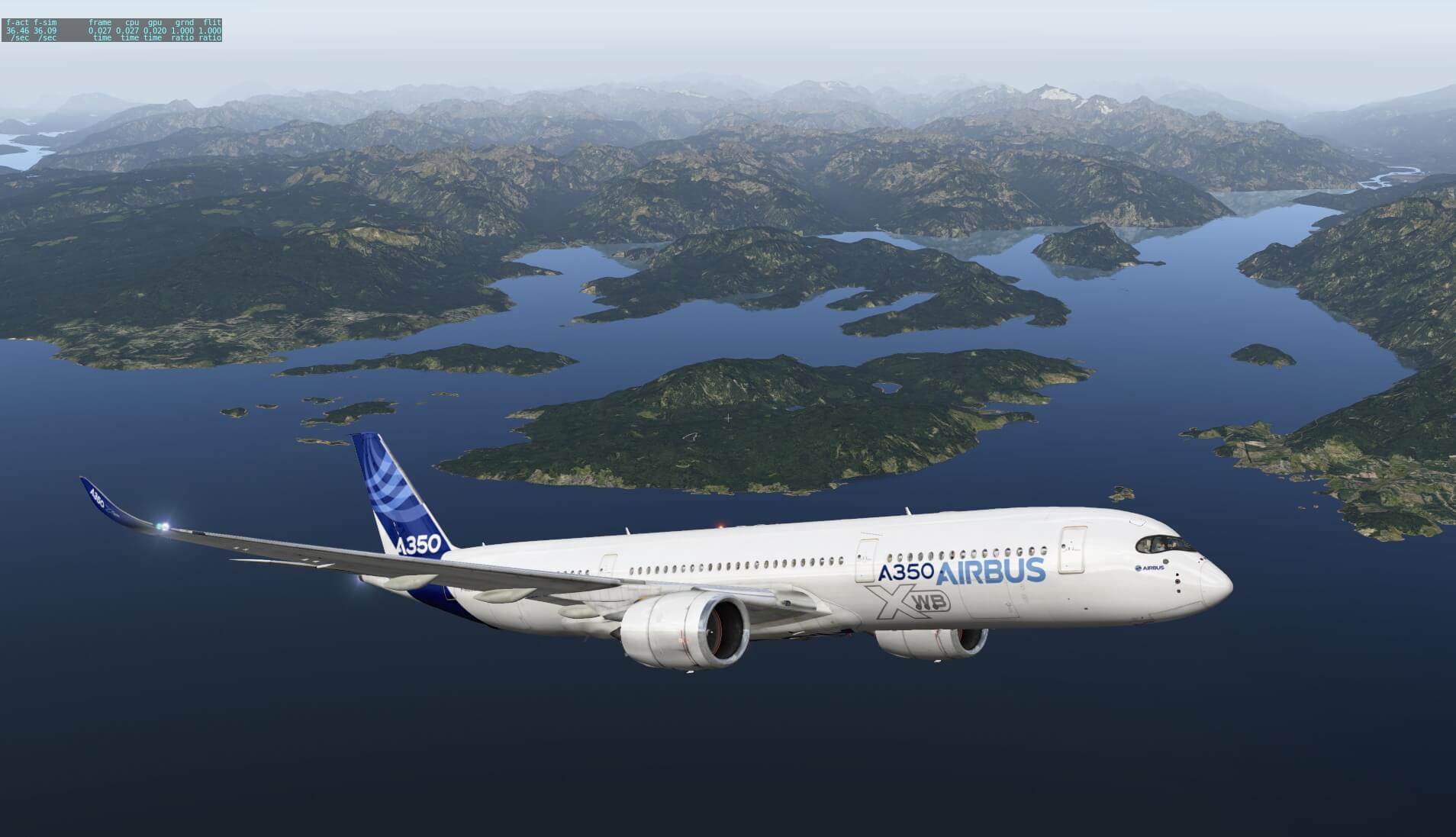 What other freeware and/or payware is installed in my default X-Plane configuration? I have standard Andras Fabian’s HD Mesh installed, but this has no effect on the frame rates. I first used Aerosoft’s Sky Tools, but I’ve moved to SkyMAXX Pro and never regret it I made this step. Oh yes, SkyMAXX Pro 3.x does influence the available frame rates, but you get a lot in return back.

When it comes to complex add-on payware airports, you might be surprised that not too many are produced and published at the rate they are for Microsoft FSX and Prepar3D. If you’ve bought a few complex payware airports, I’ve noticed that the frame rate impact differs at each of those airports and this is logical. I think many Mac’s can run complex airports and complex aircraft together, but ….. perhaps different rendering options are needed to keep the frame rates acceptable, and the downside is the overall quality of X-Plane. I’ve seen many complex medium to large size freeware add-on airports like the ones from MisterX6, Marc Leydecker (Belga12345) and NAPS which are sometimes almost of a payware quality. 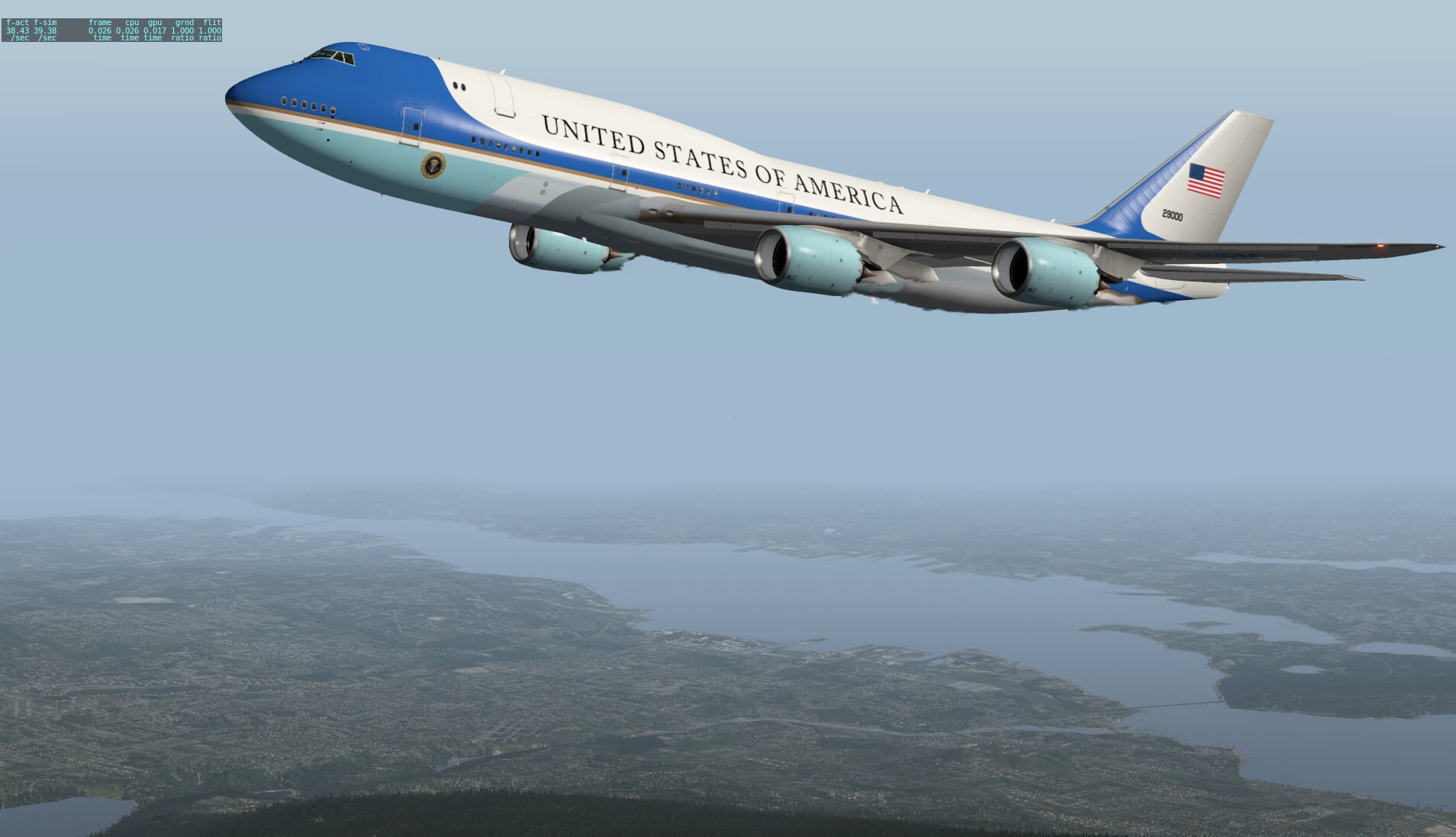 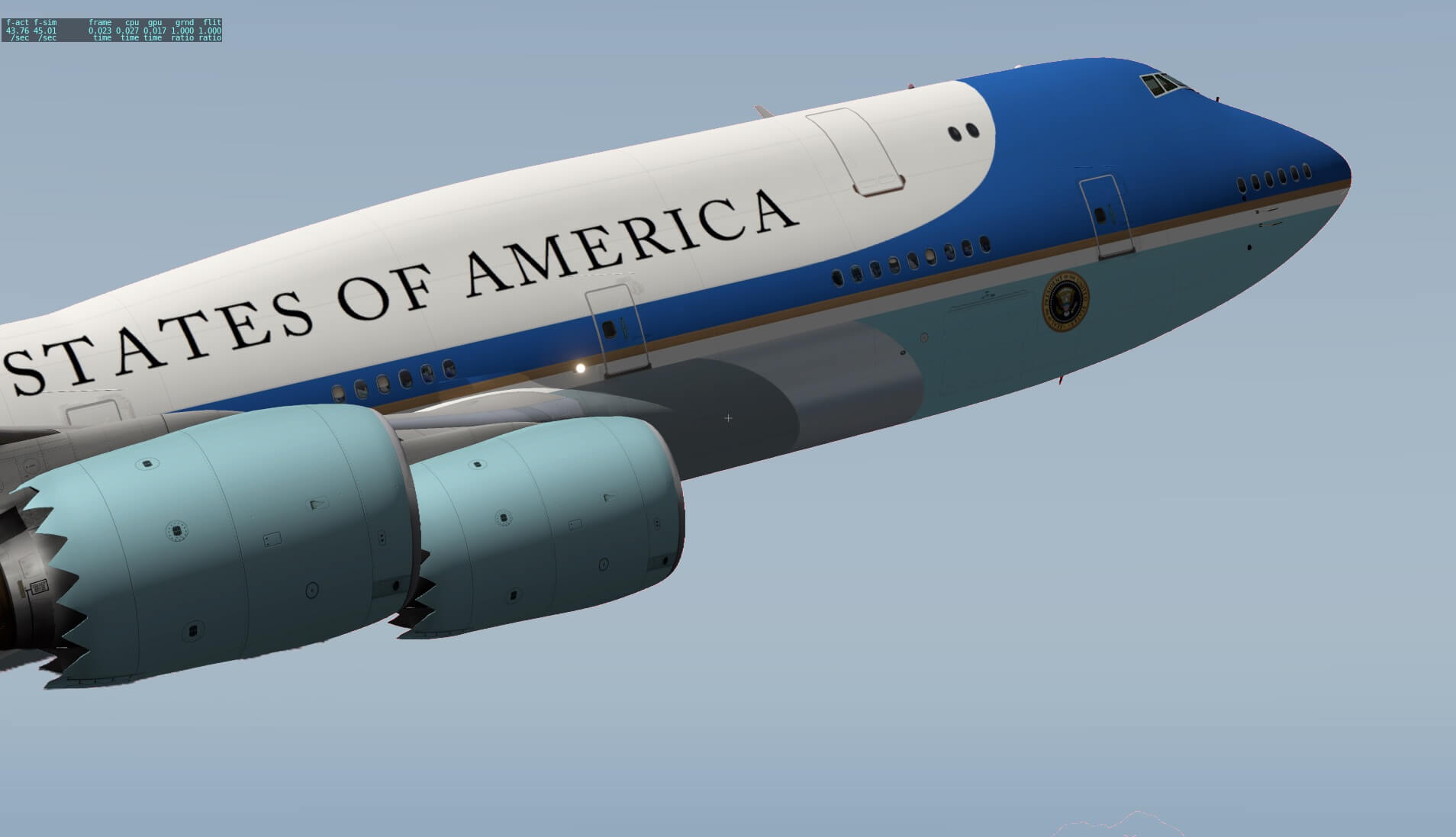 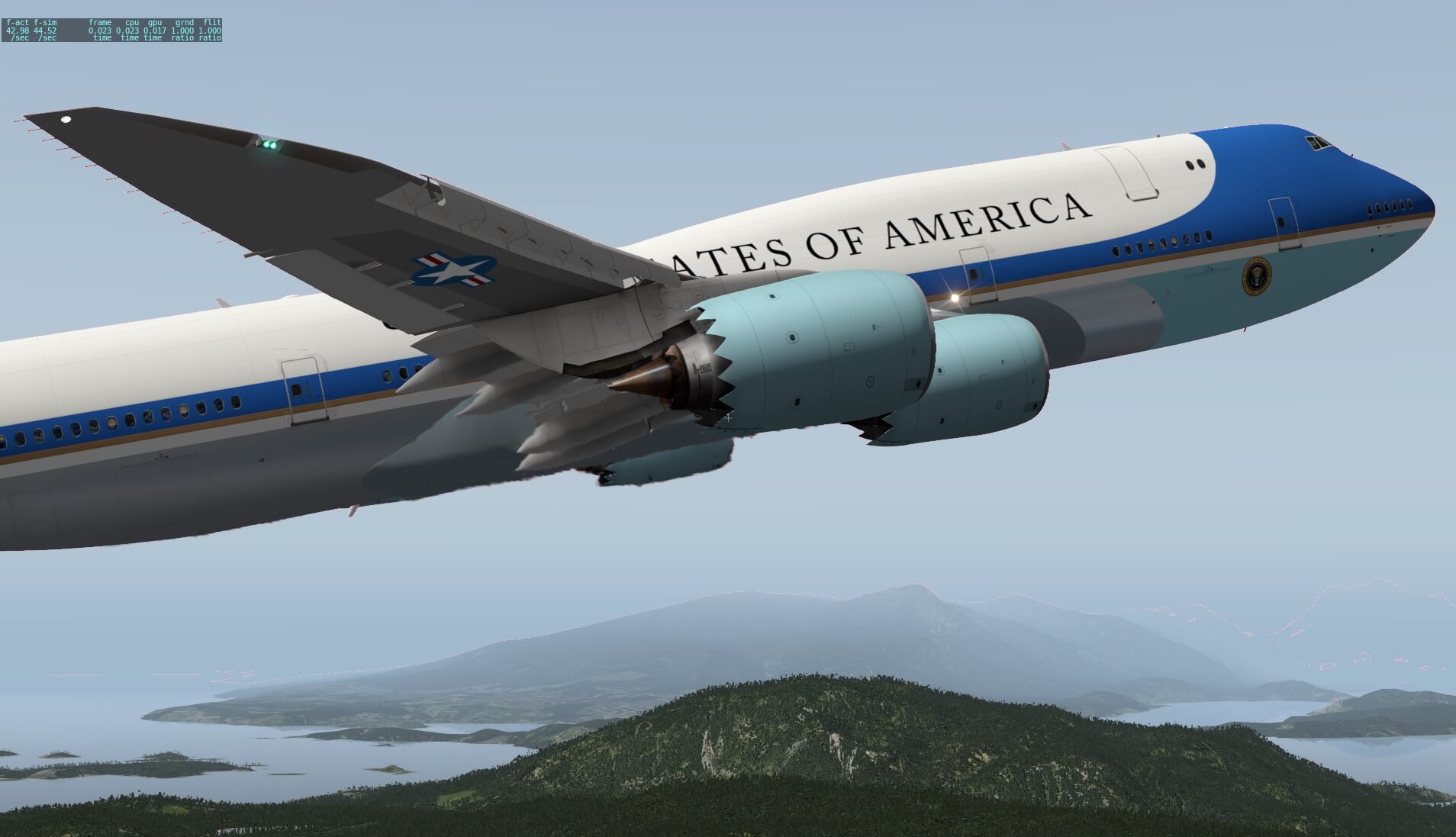 At the end, I think I did make the right choice buying the Late 2013 iMac. Yes, it cost a lot, but it was well worth making the change to this Late 2103 iMac. Suddenly, my XP experience got a huge boost. I can do much more with X-Plane 10 than I could before.

True or False?
Everybody wants the most out of his / her X-Plane 10 and everybody probably moves the Rendering Options higher then you know what’s possible for a smooth X-Plane operation. I did the same with my previous iMac. This Mid 2011 had an i7 Quad Core 3.4Ghz CPU, 16GB 1333Mhz DDR3 RAM, a 2.5 GB Fusion drive and an AMD Radeon HD9760 2GB. Not bad you could say! Although it’s a bit confusing, the old and current i7 Quad Core CPU aren’t the same. I believe the previous iMac had a 2nd generation i7 CPU, while my current Mac has a 4th generation i7 CPU. Also, in my previous iMac, I had 16GB of 1033Mhz RAM, slower then I have now (1600Mhz), but sometimes I felt as if I was running out of system memory. Now, with 32GB on-board, that’s no longer the case.

The most comfortable change for me is the move from an ATI/AMD to a NVidia graphics adapter and the move from 2GB to 4GB video memory.

Suppose you want to buy a second hand Mid 2011 iMac with the same configurations as I mentioned in the previous paragraph. Would that be a good system for you? Yes, it’s a perfect solution and it can also handle X-Plane 10 in a good way. It all depends on what your Rendering Options and I would say the screen resolution, but that’s native for a 27” 2560 x 1440 pixels. Setting some rendering options too high aren’t worth what you actually see in XP10, while others give a quicker and better result.

I simply wanted a more powerful iMac since it’s a part of my daily work and I was willing to pay for a Mac instead of a Windows computer. I’ve had it with Windows and prefer already for years Apple’s Mac OS X and now then MacOS Sierra. 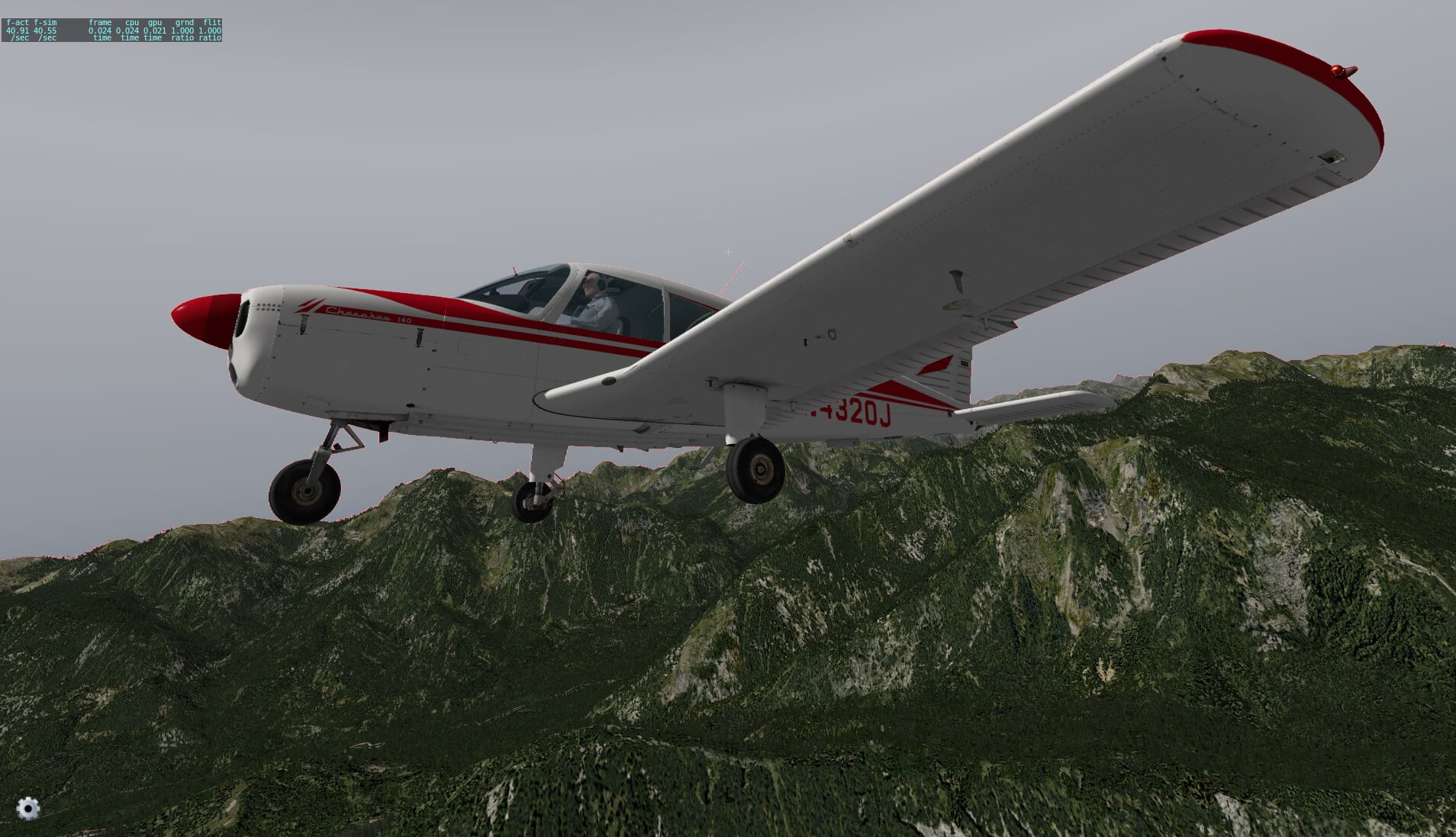 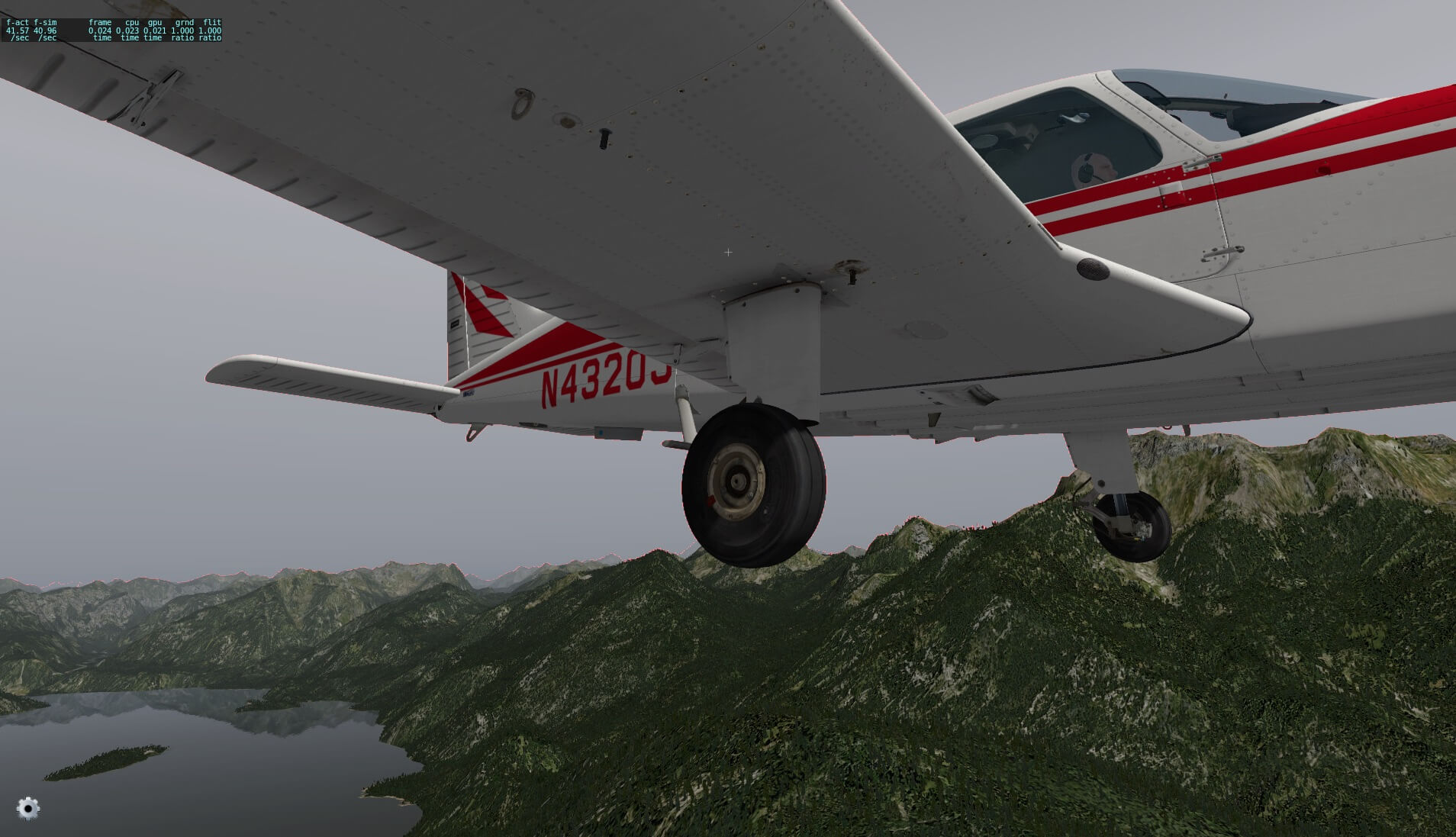 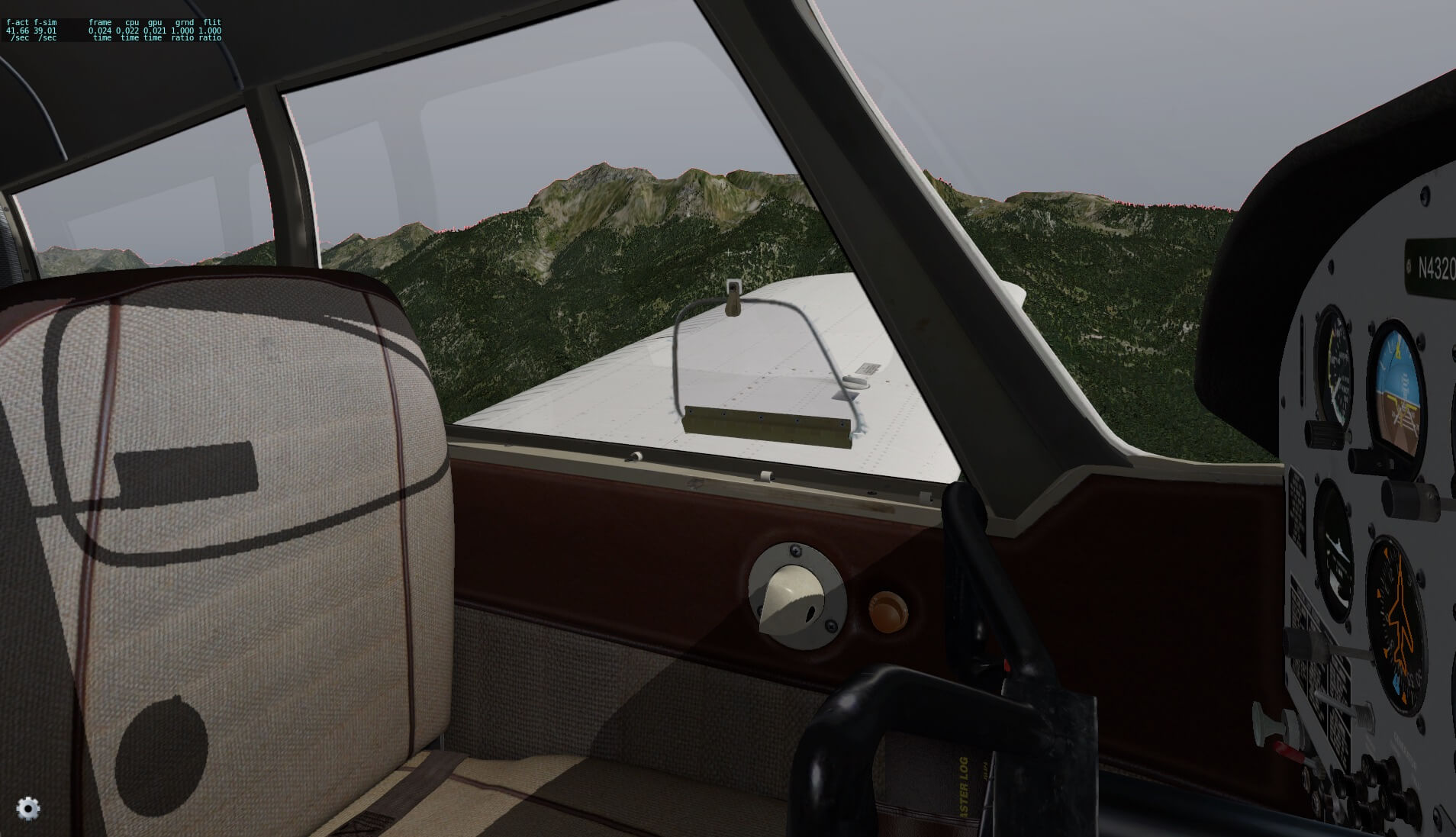 Before I forget it, what about the integrated sound?
When you play X-Plane 10 you naturally want the best sound. That might present a slight problem when you take a look at the iMac integrated speakers. I’m not disappointed, but it’s true that there are much better speakers on the market. The question then arises, “do you want external speakers connected to your clean looking iMac?” I know that all iMac users aren’t the same, but I prefer no cables connected to my iMac except for the power supply line.

Anyway, let’s get back to the iMac sound.
In TechRadar, I found an article about the XtremeMac Tango Bar and in the article was this comment, “The iMac, Cinema Display and Thunderbolt Display have fairly decent loudspeakers built in already. So what does XtremeMac bring to the party? Watch a movie in iTunes and you’re rewarded with a richer, warmer sound than the iMac can muster, with clear sounding dialogue. You even get reasonable bass.”

So, if you prefer external speakers, connecting them to your iMac can be done in many ways. Pretty much the same way as for a Windows PC. Most of the time, iMac users are quite critical of design and so am I. That’s why I’m mentioning this Xtreme Tango Bar speaker which fits underneath your 21.5 inch or 27 inch iMac, connect it to the iMac with a single USB cable and you’re ready to go.

For those who are interested; the screenshots in this article are taken somewhere in Western Canada near Vancouver with:
– Andras Fabian HD Mesh
– SkyMAXX Pro 3.3.1
– SSG 747-8i Advanced
– Flight Factor Airbus A350 XWB
– vFlyteAir Cherokee 140 Classic

Although the iMac screen resolution is 2560 x 1440 pixels, the screenshots were taken in a windowed X-Plane resolution set to approximately 1900 x 1090 pixels. That was it. Feel free to contact me if you’ve got additional questions related to this impression. You can reach me via email Angelique.van.Campen@gmail.com.