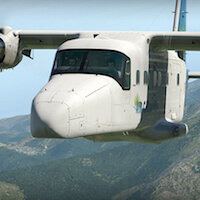 We’ve been all waiting for this, a famous X-Plane 11 aircraft, the Dornier Do 228 from Carenado.

The Dornier Do 228 is a twin-turboprop STOL utility aircraft, manufactured by Dornier GmbH (later DASA Dornier, Fairchild-Dornier) from 1981 until 1998. In 1983, Hindustan Aeronautics (HAL) bought a production licence and manufactured 125 aircraft. In Oberpfaffenhofen, Germany, 245 were built, and 125 in Kanpur, India. In July 2017, 63 aircraft were in airline service.

The Dornier 228 is a twin-engine general purpose aircraft, capable of transporting up to 19 passengers or various cargoes. It is powered by a pair of Garrett TPE331 turboprop engines. The Do 228 is commonly classified as a Short Takeoff and Landing (STOL)-capable aircraft, being capable of operating from rough runways and in hot climates, this capability has been largely attributed to the type’s supercritical wing which generates large amounts of lift at slow speeds.

The Carenado model comes with the following features:

Our dedicated reviewer Andy Clarke will dive into the Carenado Dornier for you and soon we’ll present to you an in-depth review. More information can be found at the Carenado website. And, on behalf of Carenado,  don’t forget to check out our dedicated Google+ Dornier Dp 228 screenshots.