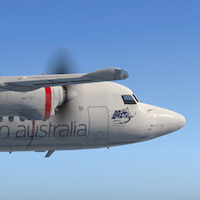 We’re so pleased – and Carenado too – that their Fokker F50 is from now on – August 2019 –  also available for X-Plane 11. Although the Fokker Factory I know from the past doesn’t exist anymore, world famous where the Fokker F27 turboprop and the F28 small jet aircraft. The modeled F50 is based on the Fokker F27, but many things have been added, changed, modified with of course EFIS and other advanced avionics systems.

The Fokker 50 was developed during the early 1980s following a decline in the sales of the company’s earlier F27 Friendship. It was decided that the new airliner would be a derivative of its predecessor, sharing much of its airframe and design features, while incorporating new advances and several improvements, such as the adoption of Pratt & Whitney Canada PW127B turboprop engines, in order to produce a successor that had a 30 per cent reduction in fuel consumption over the F27.

The Fokker 50 performed its maiden flight on 28 December 1985, and entered revenue service during 1987.

The Carenado Fokker F50 comes with the following features:

Want to know more about this beauty? Check it out at the dedicated Carenado Fokker F50 page.