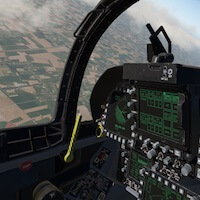 The screenshot is somewhere taken in the United States while Freddy is flying or perhaps mastering the FA-18F fighter in combination with X-Plane pb11 (I assume), The FA-18F Super Hornet is more than just the 2-seat version of the FA-18E. It’s two seat layout enables the crew to use the equipment, aerodynamics and power to the full potential. The FA-18F (together with E, C and D) are the back bone of today’s american naval flying forces.

On behalf of the X-Plained team, many thanks Freddy for taking the time to make them for us and to send them over. And now … next please, but please remember ….. the screenshot must have a width of 2560 pixels else I need to blow-up the screenshot to this dimension which means quality loss!