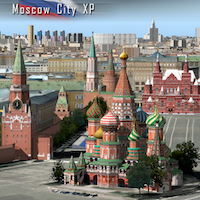 Drzewiecki Design is pleased to inform you that they have released Moscow City X. Moscow City is without doubt a very detailed model of Moscow metropolitan area in Russia, together with lite sceneries of 7 airports, many heliports and thousands of buildings.

It took almost a year to complete and it includes countless fantastic features. The FPS/VAS-friendly design and advanced optimization techniques make the product’s performance as satisfactory as possible.

Want to know all about it? Check it out at the dedicated Drzewiecki Design web page.