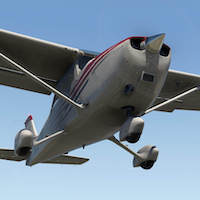 Flying the Grand Canyon
We’ve visited many times the US Grand Canyon National Park. Many time it was driving around by car and twice we walked down to the river and back up. Ok, not in one day, but we did it.

During one of those visits we decided to rent an airplane and fly above the Grand Canyon. No no, not what you think. I was not flying the aircraft. We paid that company for a flying trip over the Grand Canyon and for some reason, we had a lot of luck that day since we where the only 2 passengers in that aircraft. It was not a Skyhawk C172SP, but slightly bigger. Anyway, would it be great to do it once more but this time with X-Plane, an awesome photo-real scenery below and a well developed airport near the south rim.

That said, I decided to rent the Carenado C172SP Skyhawk for X-Plane 11, loaded the freeware airport of KGCN National Park airport, loaded all the ortho textures to get the best of the best down below me when flying over the canyon. How was it? Did I like it and how was the C172SP? Curious … check out the following exclusive screenshots. Enjoy!