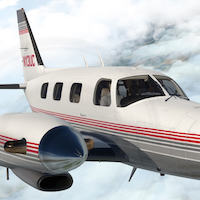 This time I decided to make a photoshoot session of the Carenado PA-31T Cheyenne II for X-Plane 11. And no, in case you think that, this is not a review of the aircraft, it’s just a bunch of photos I make on this IFR trip, starting at EHBK to EHTX. I created with Little NavMap, my favourite flight planning program (besides that, the program can do much more then only flight planning), an scenic IFR flight from Maastricht-Aachen airport via RKN (Rekken VOR) to EEL (Eelde VOR), via PAM (Pampus) to Texel airport (EHTX). Yes yes, I know, when you’re familiar with the Netherlands then this is far from an economical flight plan, but that’s the advantage from you fly offline and if you want, you could do it in real too although it will cost you a lot of money. For now, enjoy these exclusive screenshots, offered by X-Plained.Com for you!

Anyway, to give the overall a good look, I decided to install the following freeware add-on packages, besides of course the Carenado aircraft itself: