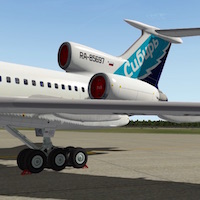 No no, this isn’t a review yet. A review or impression comes not earlier then after my holiday, but it must be said that the Tupolev Tu154 Series was, oops, they are still flying around, a impressive Russian aircraft. Tupolev is also known of the Tu144, the Russian Concorde. Want to know more of the NATO name “Charger”? Then you must check out this Tu144 Wikipedia link.

Conceptually similar to the British Hawker Siddeley Trident, which first flew in 1962, and the American Boeing 727, which first flew in 1963, the medium-range Tu-154 was marketed by Tupolev at the same time as Ilyushin was marketing the long-range Ilyushin Il-62. The Soviet Ministry of Aircraft Industry chose the Tu-154 as it incorporated the latest in Soviet aircraft design and best met Aeroflot’s anticipated requirements for the 1970s and 1980s.

Anyway, more about this in the impression. For now, enjoy the following screenshots and additional description of Felis his Tu-154M.