Update Description (starting with the very first release): According to Agi “The main feature of this update is the new advanced cloud manipulation submenu (click ‚more‘ on the clouds switcher button) allowing to optimize the cloud appearance with many parameters. I think I will have to add some presets once I have figured out some good settings for the various cloud texture sets available and very likely I will find some bugs in the next few days so there will possibly be some more minor updates coming.”

“Sorry, another update to Version 1.10a providing presets for the following texture sets: Active Sky XP, FSEnhancer and Enviro+.

Oops, Agi has just updated his plugin to version 1.10b. According to Agi as I found myself suffering from hpoxia again and again I made oxygen controls available for the tweak utility so it’s now possible to equip all sort of aircraft with the native X-Plane crew oxygen system. Further I splitted up the baro + gyro helper into two separate tools to use them independently and fixed b2volumecontrol lua script incompatibility. On March 6th to version 1.10d. According to Agi “This time I made a Cloud Level fix for bringing the distant Clouds to the same height as the closer ones – this gives a more plausible look when seen from above and you will never fly towards unreachable walls of clouds again. Further, this fix brings the clouds to a correct altitude better matching the reported Cloud base and not thousands of feet above (as happening with most cloud tweaks).”

We’re pleased to inform you that FTU has reached update version 1.10e. According to Agi “The new Version 1.10e Features a gui scaling for larger screens and many small changes and fixes partially under the hood so I had to do some more testing than usually when adding or changing simpler code. Recently Agi updated his FTU once more namely to version 1.10h. According to Agi Well… I have the smaller bug fix update ready, no dramatic changes but a single new option ‚sky brightness‘ and some bug fixes regarding the visibility menu.”

But there’s more. Agi updated his FTU to version 1.10j and this update is special as he finds that. According to Agi “I released a new version with a pretty cool new feature. As I’m currently flying helicopters I missed the force trim function coming in some more complex addons in some less complex ones so I did this myself. The Tweak Utility is now capable of adding Force Trim functionality to any helicopter and there is a calibration system for getting highly accurate results as well.” Agi continues “I added force trim functionality for helicopter pilots – this allows to add force trim to any helicopter. There is also a calibration tool in the controller options, I strongly recommend to make use of it if force trim does not hold your current attitude as expected.” For more information, visit the dedicated Agi FTU page.”

Attention … attention …. latest version
According to Agi “The new FTU 1.14d fixes some minor stuff for XP 11.40 and lots of stuff under the hood, there are no fancy new features this time. Because of the internal restructuring this version was in longer testing for some months now and should be stable but you have to remove the older installation before updating to avoid a mess in the new and clean file structure.”

Your save files will get lost but there is a workaround for this:

Attention … attention …. latest version
FTU has been updated to 1.15 providing X-Plane 11.50 compatibility and much more. According to Agi “I have a new FTU Version with some minor improvements and a new feature. There is now a set of clouds textures included which can be installed with a new button in the clouds options menu. The installer will create a backup of your installed cloud textures set before installing so you can reset the clouds easily via FTU. After installing the new textures you need to either Restart X-Plane or reload the clouds textures in sim using the texture browser (search for ‚puff‘ and reload all puff textures).”

I also added a completely Independent clouds saving system: Users now can store their custom clouds into up to 99 save files. For making sharing easier there is also a share mode: When in share mode the clouds will be stored into and loaded from separate share files so users don’t have to risk loosing their own save files when importing configurations provided by other users. Of Course the normal saving is still fully functional, this is all just an addition for saving, restoring and sharing other configurations than my presets.

This time I made a Cloud Level fix for bringing the distant Clouds to the same height as the closer ones – this gives a more plausible look when seen from above and you will never fly towards unreachable walls of clouds again. Further, this fix brings the clouds to a correct altitude better matching the reported Cloud base and not thousands of feet above (as happening with most cloud tweaks). Important note from AGI; You will need FlyWithLua Next Generation if you want to use the utility – it WILL NOT WORK with FlyWithLua Core Edition!

Why do you need another tweak and settings script?
I know there are some settings and tweaking tools out there but none of them did satisfy me so I always kept tweaking myself with simple scripts for changing the parameters that really impact performance without sacrificing visual appearance to much. For making this easier and to have the possibility to use different tweaks and settings in different aircraft I wrote the tweak utility. All the settings the utility gives access to have an instant effect without the need of a scenery reload (except the extended DSFs switch, it initiates a reload when clicked) and I think they are more or less self explanatory.

Is it a worthy product?
Believe me it is. Your personal reporter Angelique van Campen trigged to find out all the inns and outs and she’s amazed in what this tiny lua program can do.

The Tweak Utility comes with the following Features and possible settings:

Some installation notes to know regarding this program:
Download and unpack ‘FlyAgi_Tweak_Utility.zip’ and copy the files and folders

If the utility crashes on startup please remove all older save files from the script directory. 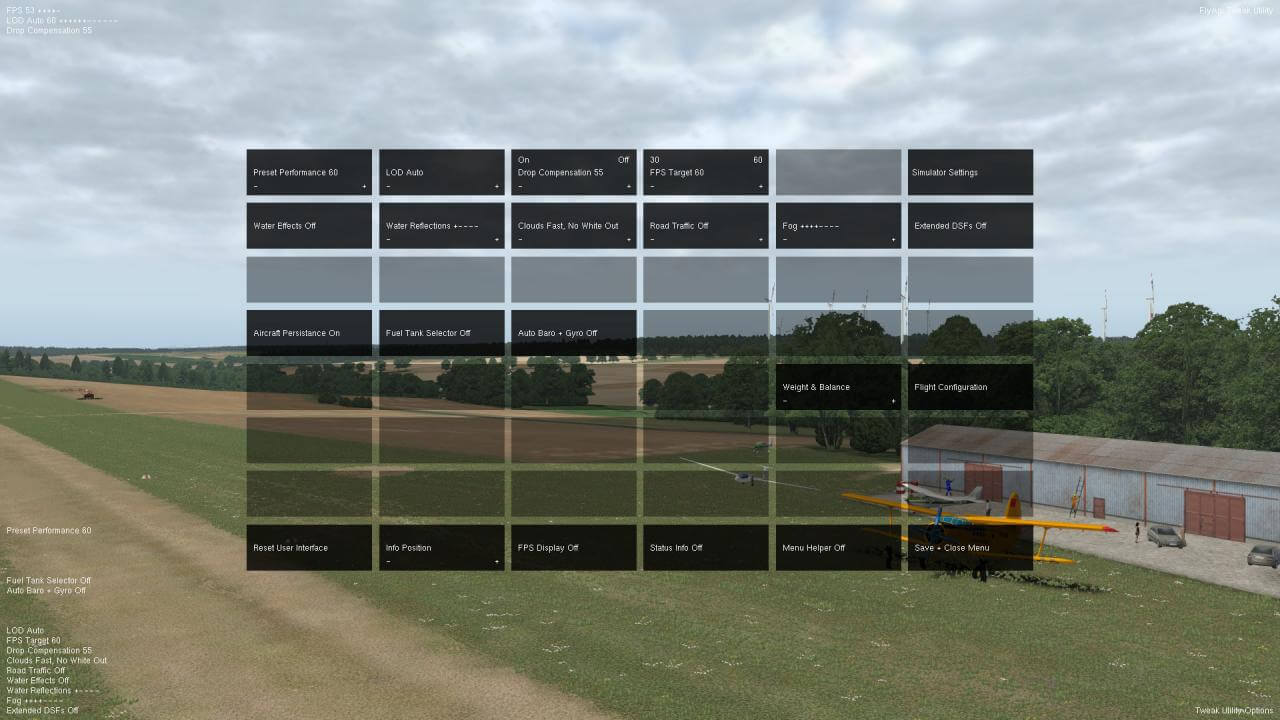