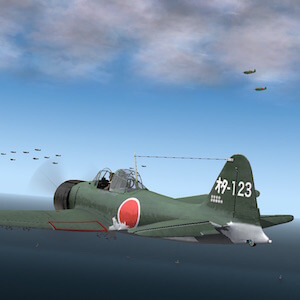 We’re pleased to inform you that X-Plained is granted – of course with the approval from Chris Noe – to promote and distribute his Flyby Planes Library.

Flyby Planes Library add 10 animated flying planes in 60 seconds to any airport! In total of “173 flying planes, helicopters, and gliders”.

These planes are animated objects you add to your scenery in Overlay Editor. These planes are different than World Traffic, they don’t need it or use it. They have virtually no FPS penalty, so add a few, even low end machines can handle them. They work great with world traffic too, by adding even more planes when used together.

Add 10 planes in 60 seconds to any airport: Go to airport runway center and paste different planes and liveries to the same location. The planes have different start points and altitudes so no collision or conflict. Every livery starts at different point, add 3 310 liveries, 2 380 liveries, 2 747’s ect…

Ga’s work better for small airports. Varying and rotating the paste points creates an infinite variety of flight patterns. The idea is, it’s really really fast to populate the sky.

Builders and airport posters: Please feel free to use these planes in your freeware airport posts. This is a free tool for builders to enhance their scenery.

Instructions: Unzip and place in your Custom scenery folder.

Think of these as planes that circle an airport, as if awaiting landing clearance. They all act differently, and cruise around wherever you place them. There’s 9 groups, Airliners, Float Planes, General Aviation, Gliders, Hang gliders, Helicopters, Military, WW I and WW II. There’s even a moving blimp. I created them using freeware static planes, removing landing gear and prop blades and placing them in the air and adding very gradual rotation, so they appear to be flying. There fun to chase, just fly up to them. Every plane object has a different start point and altitude so you can go to one location and add a bunch of different planes with no collision or conflict. Planes are changing altitudes a little as they fly, they’re not flying completely horizontal. A plane put on mountain top will be way higher that one put at sea level, there actual flying altitude depends on placement elevation.

Important:
In Overlay Editor, when you select a plane, it will appear blank, you won’t see a plane in window. That’s because what you are seeing is the center of the planes orbit, not the plane itself. Choose a plane, go to where you want it to circle, such as the center of an airport and place them. Keep in mind that WED and OverleyEditor are desighned for placing objects on the ground, not the sky. If you zoom back, and angle view, and can locate the plane, they will appear as plane floating in air. In SIM, they come alive. The only exception is military carrier planes and runway touchdown planes, they appear in window.

Military carrier planes appear in OE window so you can place the touchdown point. They have landing gear and are scaled for use with a static Nimitz carrier. Go to a static Carrier, and place the carrier version plane on the center of flight deck pointed forward, that’s the touchdown spot, it will take off and return every several minutes, like a landing that’s being waved off. Your carrier will come alive.

Runway touchdown planes appear in OE window so you can place the touchdown point. They have landing gear and are scaled to simulate a landing aircraft. Place these planes in center of a runway, that’s the touchdown spot, it will take off and return every several minutes, like a landing that’s being waved off. These planes travel in circles, so they don’t look as natural as world traffic, as there’s a turn to the landing. Each of these “run” planes have a direction in name, exp…”run_L” turns left, “run_R” turns right. Be aware of terrain and buildings, as these planes may not fit every situation. The carrier planes touchdown at deck level and are surrounded by sea, so they work better. Runway planes are a bit of a compromise. If they don’t work right, they’re easy to remove, as there sitting in middle of the runway in OE.

WW II carrier planes appear in OE window so you can place the touchdown point. They are not scaled for the Nimitz carrier. They are scaled for the WW II carriers, like royal navy “HMS Victorious” and other posted era carriers with slightly lower flight decks. Go to a static WW II era carrier, and place the WW II carrier version plane on the center of flight deck pointed forward. Diving planes are similar, as you can see them in OE window to place over ships or buildings to dive on. Diving planes placed over a carrier for example, will dive from high altitude, simulating dive bombing on that carrier.

WW I & WW II planes come in many variations, there’re diving versions, and squads, bombers and fighters. Many of these static planes are from my mentor Mr3D’s EGOD scenery, his EGOD flybys we’re my inspiration, others from OpensceneryX. The World War I planes are from a static freeware collection. Now you can fill the sky with vintage warplanes. I built these planes to fill the skies and use with my “AI Combat Interactive Plane Collections”. I wanted to dogfight in a huge furball, I use a ton of the flybys and a couple AI planes and it’s a dogfight. Check out the AI combat planes, planes for use only in aircraft situations section, as X plane flies them, not you. 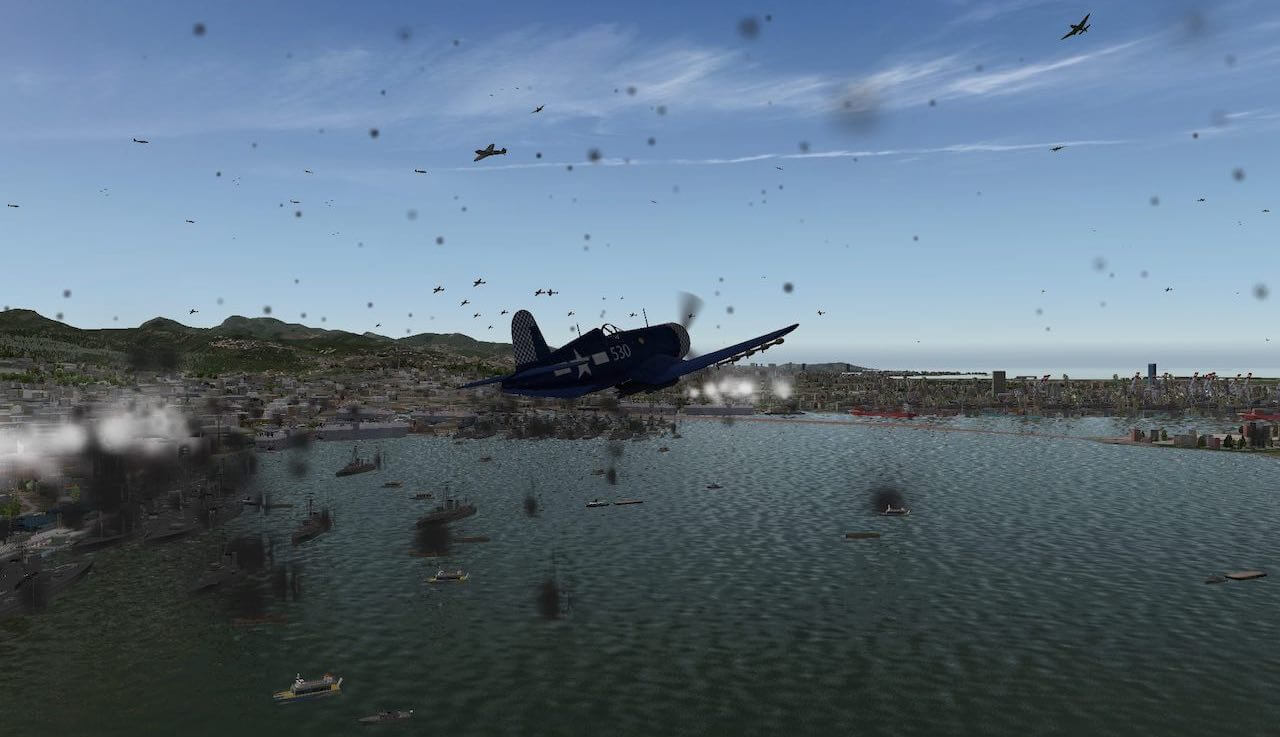 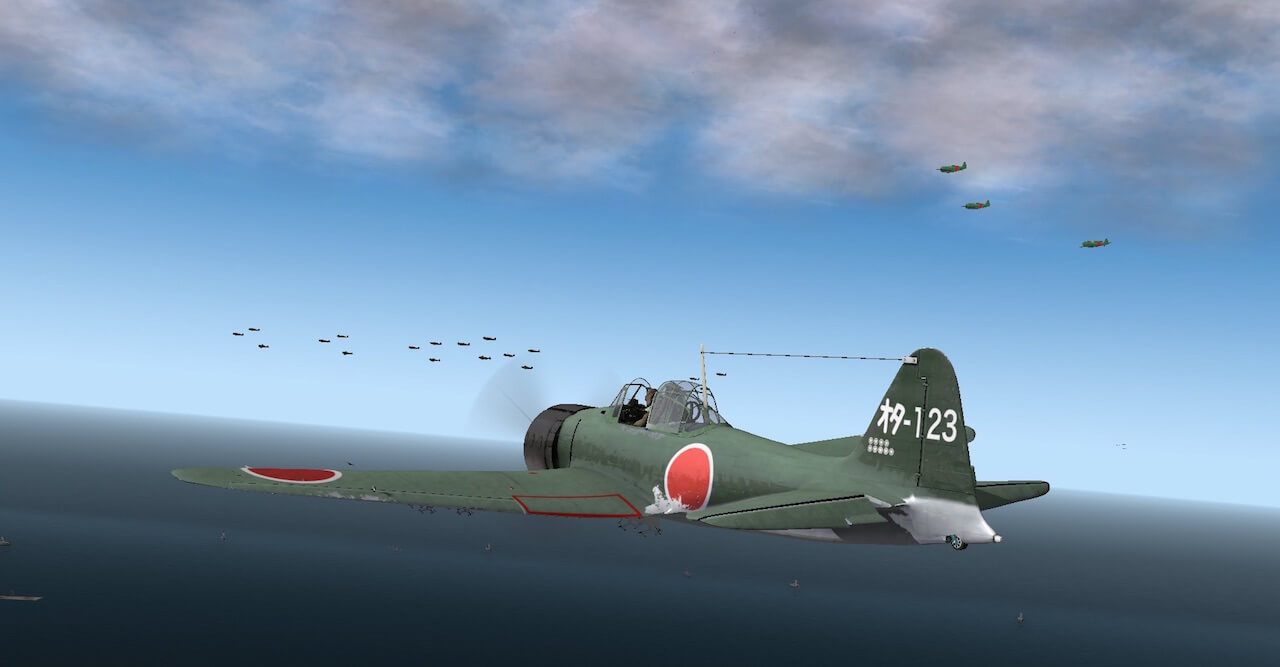