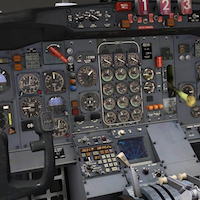 With the release of the FlyJSim Boeing 727 Series version 2.0, a new step has been made.

According to FJS and X-Plane.Org “Relive the glory days of the 70s! The FlyJSim B727 brings you back to the age of turbojets with three 727 simulations in one. This package is complete with study simulations of the B727-100, B727-200ADV and B727F aircraft. The B727 was built to allow for Jet aircraft in smaller airports that were formally exclusively for propellor aircraft. Intended for Short to medium flights, the B727 is perfect for a transcontinental flight or even a short hop down to the next airport. The B727 was the only Tri-Jet built by Boeing and it was built for speed. For over a decade, more B727s were built than any other aircraft on earth. Now is your time to join the ranks by becoming a 727 Captain.”

Further on included is a comprehensive Menu system:
– Weight and Balance Manager allows you to change the weights for PAX, Cargo and fuel, with dynamic effect on CG
– Vcard popup showing dynamic V-speeds for landing and takeoff
– Options menu popup allows you to select the navigation system that works for you and other display options
– Pushback manager; comprehensive pushback system with both manual and automatic modes. A ghost of the 727 now shows where your aircraft will be after pushback.
– Maintenance Menu optional persistent maintenance and failure system. No more will you be flying a brand new aircraft each flight. Instead each flight will wear out your engine, apu, or airframe. Your flying technique will now have a direct bearing on failures and maintenance.
– Checklist and notes
– A 32 page fully customizable window that includes checklists and an overview of the aircraft. Have something you need to reference in the flight? Add it into the notes page!
– Study sim Flight Model:
– With over 500 hours of internal testing, you can be sure that the 727 series has a quality flight model. You can operate the 727 from startup to shutdown just like a real 727 captain, making this model the only study sim of a 727 in X-Plane.

What when you own the FJS B727 version 1.0?
Previous FlyJsim 727 owners can upgrade to version 2 for only $10 if you bought the 727 series version 1, or for $25 if you bought a single 727 version 1. More information can be found at the dedicated X-Plane.Org web page.