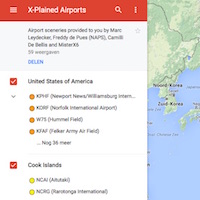 Perhaps you think “what the heck does that mean .. Google Maps Airport Limitations“?

Let me try to explain this or better to say, let Steve Haines explains this to you, because Steve informed me about this limitation with the Google maps. According to Steve his frist message to me “I once saw in your monthly newsletter a notice about a wonderful feature of Google Maps that allows you to plot airport locations and designate them by icon shape and color. I have done that for every airport I use in the US. Today I was adding some new ones and discovered that the ones I added yesterday were deleted.”

“A conversation with Google Tech Support (it is possible) revealed that there is a limit of 300 sites that one can add to such a map. In my case I exceeded that. That said, Steve tried to find another solution and found it. Steve came up with the following “I had groupd my map locations (airports) to include the following categories: Autogate, Downloaded, X-Plane, Small airfields and International (Canada, Mexico, Bahamas) defined by different icons and colors.”

“Within Google Maps you can export a group of saved locations as a.kmz file. Then you can create a new Google Maps page and import that saved file. What appears is your entire collection for that group, which you can name appropriately and save as a bookmark within your browser. I have now done that for each of my 5 groups, the largest of which includes 160 airports.”

Steve continues “It’s a bit more cumbersome but I am hopeful that will allow me to get around this limitation, at least until one of those groups reaches 300. As you point out, for most folks this is a non-issue. A few, like me, may have used this neat Google feature to create a comprehensive map of a large area, like the US. That’s a lot of airports. If they are aware of the built in limitation of Google Maps and plan their displays accordingly they should be able to get around the limit issue. Google also suggested (if my method doesn’t work) creating new user accounts, each of which would be allowed the 300 map locations. I think that’s more awkward so I hope my method works. I’ll find out when I re-add the airports that Google deleted yesterday.”

Thank you Steve for sharing this with us.
Oops, almost forgotten, worth to check out Steve’s YouTube channel DeskboundAviator.com.