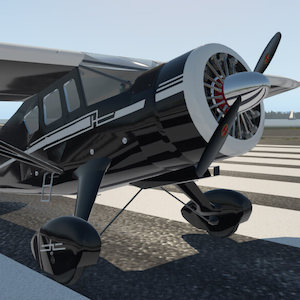 The modeled X-Plane 11.5x model
The enclosed X-Plane 11.50 model is of the historic GA aircraft, the Howard DGA-15P. The model began life as a freeware FS98-FSX model shell which I converted to the 3D modelling program, AC3D, and completely overhauled and rebuilt for X-Plane 11 over the last four or five months. Please see the enclosed “credits.txt” file for details.

The model has been tested in X-Plane 11.50 and 11.51 (but not with the experimental flight model). This is version 1.0 with many improvements and small fixes planned for the future (e.g., the 3D Wasp Jr. is only half done). But it handles very well and looks pretty nice for the most part. My real interest in model development is in 3D panels and custom instruments with nearly a dozen provided here to match the real-world Howard DGA-15P (though because these 80+ year old aircraft are restored there is a *lot* of variety in instruments today). The radios are loosely modeled on the Becker RMU-5000, but I may put in a Garmin 530 or make some sort of moving map in the future. I also plan to release a “paint kit” for this model in the future, and I would be happy to work with a painter to show him or her what goes where. The interior in particular is very plain and shows the need for an expert painter to help out if anyone is willing.

This aircraft is released as FREEWARE. No commercial use of these files is permitted, but they may be distributed and changed for non-commercial use as long as credit to the original authors is provided. And a special thanks to Pedrovl on the X-Plane.org forum for help with a fuel pressure problem caused by the three in-line fuel tanks which I never would have figured out myself.

The History
The Howard DGA-15P is the most common variant of the Howard aircraft still flying. It was built commercially beginning in 1936 the year after the designer, Benny Howard’s “Mister Mulligan” won both the Bendix and Thompson trophies for speed and endurance–the only plane ever to do this. The DGA (” Good Airplane”)-15P variants today are mostly restored military variants from WWII (e.g., U.S. Navy GH-1 to GH-4 used as air ambulances, personal transport, and instrument training).

The Howard is well-known to be a fast, comfortable aircraft that is somewhat hard to land but very stable in the air in part because the gas tanks are low in the belly, and has an enthusiastic following (e.g., www.howardaircraft.org). It has been said that if the DHC-2 Beaver is a great pick-up truck, the Howard is a stately old Buick. There are a few dozen or more youtube videos of the Howard in flight including one where the pilot does a barrel roll. (I don’t recommend it on the model – it breaks the artificial horizon–don’t ask me how I know!).

What’s new with version model 2.0?
The Howard DGA-15P was developed by Benny Howard from his highly successful 1930s racer, Mister Mulligan, and saw extensive use in WWII as an air ambulance and other functions. You will find the full story in some of the magazine articles in the /documents folder of the download. And please do read the “readme.txt” file enclosed. I have made literally hundreds of changes to this model from Version 1.0. Some are visible and some are not. Here are a few of the main things you may want to note:

I release this project as freeware for the enjoyment of the X-Plane community. Please see the enclosed readme.txt file for details. Many people on X-Plane.org deserve my thanks for help and encouragement on the project. THANK YOU!