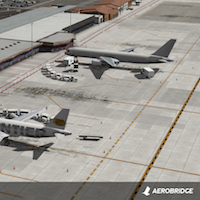 We’ve – Aerobridge – been immensely working on completing the airport for a grand release in this month. Reaching Beta Stage, we’re collecting feedback from our testers to polish the airport and have it available for everyone to enjoy, they’re submitting reports as I type this!

Jackson Hole incorporates several new “technologies” which we’ve experimented with, inspired from the workflow that’s adopted in scenery development for FSX/P3D. Apart from the familiar “layers” technique in producing groundwork, we’ve combined the best of object-based groundwork and decals-based workflow. We’re also moving to mainly object based foliage rendering, with our new grass that blends much smoother than X-Plane’s.

Jackson Hole Airport’s release details (store, and pricing) will be provided in the next few days.