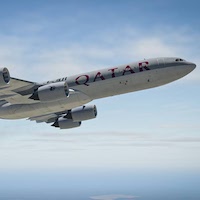 The A340-500 uses also GHD (Ground Handling) which is free in combination with the 340-500. It’s a gorgeous model created by the JARDesign team and for those who like to fly very, no ultra long distances, this is the absolute record. Not only that JARDesign aircraft are known about the way they are made, and the way you can fly them. Eye for many tiny details, but also trying to keep the FPS (Frames Per Second) as high as possible and still trying to model every system as in real. According to Evgeny “We tried to make the system as close as possible to the real and emulate the most of the aircraft systems. But in some systems we have used a number of simplifications. In other words, no 100% guarantees of compliance to the real world prototype.”