JF Vulcan (the Plane) Out Now 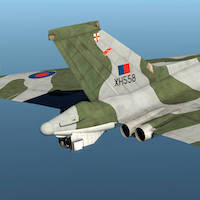 Just Flight, in partnership with Thranda Design, are proud to present the Avro Vulcan B Mk2, K.2 and MRR for X-Plane 11.

Following on from their award-winning PA-28 series, Hawk T1/A Advanced Trainer and C152, this highly detailed simulation of the Avro Vulcan B Mk2, K.2 and MRR is being developed by Just Flight’s in-house team and Thranda Design following comprehensive, hands-on research with a real-life Vulcan B Mk2, XM655, based at Wellesbourne Airfield.

The Vulcan B Mk2 is an iconic, four-engine, delta-wing strategic bomber which saw service in the UK during the Cold War. XM655, on which this product is based, was the third-from-last Vulcan to be produced for the Royal Air Force. It was delivered in 1964 and saw service as part of the UK’s nuclear deterrent force throughout the 60s and 70s. It is now being preserved by a team of volunteers at Wellesbourne Airfield.

But JF and Thranda Design offers much more information. Feel free to check it out at the dedicated JF web page.