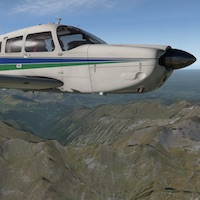 For those who have forgotten the Piper Arrow, here’s a small reminder ….. the PA-28R Arrow III is a four-seat, piston-engine aircraft equipped with retractable tricycle landing gear and a constant-speed propeller – an ideal aircraft for touring and instrument training. The origins of the Arrow start with the Piper Cherokee, which began production in 1961.

The Cherokee was introduced as a more affordable alternative to Piper’s Comanche and to compete with the popular Cessna 172. Piper introduced the original Cherokee Arrow in 1967 and it was the first of the Cherokee family to feature retractable landing gear. The Arrow II followed in 1972 with a stretched fuselage to provide increased leg room for the rear passengers, and the Arrow III arrived in 1977 with larger fuel tanks for improved range and a semitapered wing and longer stabilator for improved low-speed handling.

Enough about this. Those who own the JF PA28 Arrow should have received an email from Just Flight. If you did not, then here’s the version update 1.3 comes with the following change log: