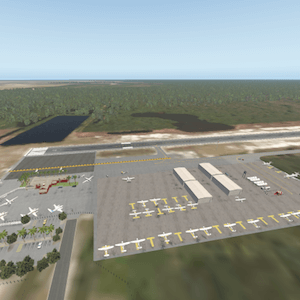 On behalf of Freddy De Pues and his NAPS team e’re pleased to inform you about the release of Marco Island Executive Airport version 1.0.

The airport was initially designed to compliment plans of creating a resort area south of Naples. Immediately following completion in 1976, the airport was primarily used as a marketing tool to help sell Marco Island lots. Developers would fly prospective Marco Island homeowners and investors over from Miami. Eventually the developers turned the airport over to the state of Florida, and in the 1980s the state, in turn, leased it directly to the county.

Although most U.S. airports use the same three-letter location identifier for the FAA and IATA, Marco Island Airport is assigned MKY by the FAA and MRK by the IATA (which assigned MKY to Mackay Airport in Mackay, Queensland, Australia). The airport’s ICAO identifier is KMKY.