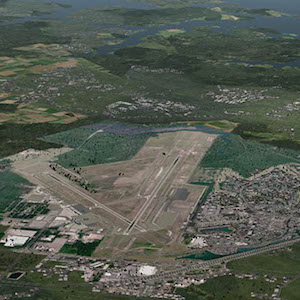 KPHF Newport News, Virginia USA is located on the picturesque Chesapeake Bay, a popular hub to historical Williamsburg. This airport is frequently used by “Air Force One” for touch and go’s.

Newport News is included in the Hampton Roads metropolitan area. It is at the southeastern end of the Virginia Peninsula, on the northern shore of the James River extending southeast from Skiffe’s Creek along many miles of waterfront to the river’s mouth at Newport News Point on the harbor of Hampton Roads. The area now known as Newport News was once a part of Warwick County. Warwick County was one of the eight original shires of Virginia, formed by the House of Burgesses in the British Colony of Virginia by order of King Charles I, in 1634. The county was largely composed of farms and undeveloped land until almost 250 years later (Courtesy of WikiPedia).

The main terminal, tower and Noland hangers are custom build. The main terminal, is a heavily modified version of Cedric D. The other objects/buildings are default xPlane scenery, OpensceneryX or contributions from other members.

I included the airport layout and approach charts which are located in the DOCUMENTS folder.