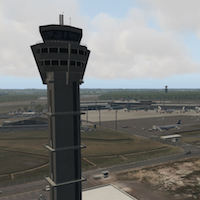 We’re pleased to inform you that GloballArt modeled Salvador Bahia Airport (SBSV) with great precision.We’re pleased to offer you some exclusive screenshots of this airport with X-Plane 11 and SkyMAXX Pro. Curious ….. check out this screenshot link. and, does it look promising?

The airport, originally called Santo Amaro do Ipitanga Airport, was founded in 1925. In 1941 Panair do Brasil participating in the World War II efforts with the support of the American and Brazilian governments completely rebuilt the facility. A brand new passenger terminal was opened in 1998, replacing the original outdated terminal. This new terminal continued to be upgraded and was completed by the end of year 2000. The main terminal, which includes a shopping mall has 69,400 m², 11 jetways and a capacity to handle 6,000,000 passengers/year. Traffic has been growing at an average of 14% per year.

You can buy the airport at the dedicated X-Plane.Org webpage.