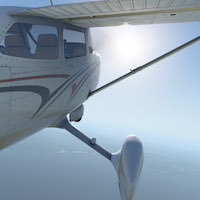 With a brand new user interface, and a new level of quality in the included aircraft, X-Plane 11 is the upgrade you’ve been hoping for.

With an overhauled fleet … aircraft models that stand up to scrutiny, from the gear trucks to the rivets. And not to forget a brand new G1000. Many general aviation planes now feature a simulated Garmin 1000. But we shouldn’t forget the 3-D cockpits. Every aircraft in the fleet comes with a beautiful, usable 3-D cockpit.

Just an example … the Cessna 172SP is a single-engine, fixed-wing aircraft with a tricycle landing gear. It has a cruise speed of 122 knots and a range of 696 nautical miles. More C172s have been built than any other aircraft, making it the most successful plane in history. check it out right here.