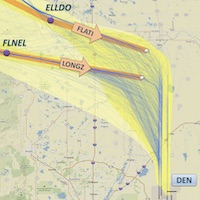 We’re pleased to share with you the following article from Bruce Knight, one of our reviewers. It deals with new MetroPlex procedures for Denver International Airport (KDEN).

The current Denver airport was commissioned in February 1995, at which time the older Stapleton airport (also called KDEN) was decommissioned.

In recent years, traffic has continued to increase at KDEN and the surrounding reliever airports, corresponding to the population increase in the area. As a result, there have been more noise aircraft complaints over cities, and the pristine open space areas that are so popular in this area, as well as over the Rocky Mountains. In order to address these complaints as well as consolidate the many procedures previously in place for KDEN, as well as the surrounding reliever airports, , a new set of arrival, departure and approach procedures was developed.

When flying with ATC, either the actual thing or with virtual ATC in the sim, someone is giving you a DP, STAR and/or approach, as well as radar vectors, as they can see the “big picture”. However, when flying on the sim with no ATC, it’s hard to know which procedure works for the direction of flight, both at the departure and the arrival airports.

Additionally, some STAR’s are linked to approaches to some runways, so that an L-NAV / V-NAV approach can be made to minimums or better- however without reading through the entire book of procedures for KDEN you would never know which STAR’s connected to which approaches. Likewise, some DP’s only have radar vectors from certain runways to join the SID, where other runways are connected to the SID and can be flown through L-NAV / V-NAV seamlessly.

I have created a matrix in Excel so that I can utilize these new procedures in the best way. I have found that if I know my way around the procedures, they are highly efficient in being able to navigate to or from the airport. All of these procedures are R-NAV, other than some of the approaches are ILS/LOC or R-NAV Z. Note that there are older procedures that utilize terrestrial navigation, and although they have been updated, they offer none of the integration that the R-NAV ones do, so I have not included them. I have only done this matrix for KDEN, not for the other reliever airports in the Denver area.

Here’s a link to an FAA page describing the new MetroPlex program. Note that this page contains a downloadable matrix that shows which KDEN procedures are used for flights from other specific airports within the US. Find here the MS Excel sheet with all new arrivals/departures KDEN. For those who can’t read or open the Excel sheet, here’s a link to the Adobe Acrobat files.

Finally- as always- if you actually fly a real airplane, please don’t use this information as I will not be updating it to keep it current. You might find yourself being given a phone number to call on arrival.