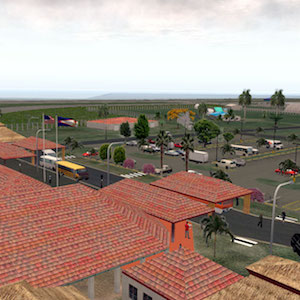 It’s has been inserted lakes between the runways, as the real world, using the software program “MeshRemexe” created by Josenildo Nascimento! This is a new scenery package as real as the real one. This version is for X-Plane 10. Tested in X-Plane 10.42 in Windows 64 bit.

Pago Pago International Airport (IATA: PPG, ICAO: NSTU, FAA LID: PPG), also known as Tafuna Airport, is a public airport located 7 miles (11.3 km) southwest of the central business district of Pago Pago, in the village and plains of Tafuna on the island of Tutuila in American Samoa, an unincorporated territory of the United States.
The site and location of the current airport was originally known as Tafuna Airfield. It was part of U.S. Naval Station Tutuila – Samoa Defense Group Area[3] and was partially constructed before war broke out in the Pacific on 7 December 1941. Two airstrips were completed and opened on 17 March 1942.

The airfield was first utilized on 19 March 1942 by U.S. Marine Fighting Squadron VMF-111 which arrived by ship from San Diego, California. VMF-111 aircraft were off loaded in Pago Pago harbor and trucked to Tafuna airfield. The first planes from MAG-13 also arrived at Tafuna Airfield on 2 April 1942 at which point they assumed responsibility for the air defense of American Samoa. Marine Torpedo Bombing Squadron VMO-151 arrived in early May 1942 at Tafuna Airfield where all three squadrons were based during the early part of the Pacific War. VMF-111 was eventually transitioned and based at Faleolo Airfield in Western (British) Samoa after Faleolo airfield was completed in July 1942 to protect Upolu and Savai’i islands. (Courtesy of Wikipedia)

Also needed, but not necessary:
– AutoGate animated kit 1.62 or the autogate plugin.

Donations:
If you like my work, consider donating! Donations are 100% optional, but greatly appreciated.

Want to see some exclusive screenshots before you download? Then you must check this additional screenshots link.