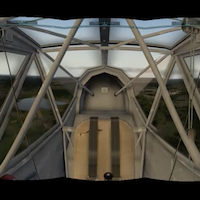 OpenVFR would like to inform you about their beta development of a 360 degree video.

According to Markus Freyt from openVFR “A lot of flightsim enthusiasts are uploading fantastic videos and I very often thought it might be interesting to change the camera view while watching all those videos. That was the idea of making flightsim videos more interactive. We think that 360-degree videos, also known as spherical videos, are the next step for sharing your flight simulator experience with other people. Its about to let the viewers click and drag to adjust the viewpoint around a single point as the video plays back. The goal of this project was to write a plugin for X-Plane 10, which records all camera views in every direction at the same time and produces a 360 degrees 3D video to be uploaded (manually) at Facebook and Youtube.”