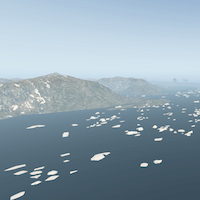 Always looking for icebergs when flying in these areas?

The openVFR team is happy to publish its first VFR Scenery plugin for the flight simulator X-Plane. The project is called openVFR IcebergsXP. This time we have focused on placing icebergs in X-Plane at their real occurrences. The iceberg information is taken from official satellite data used for real marine research and training. Alternatively the user can simulate creating icebergs in areas where they hopefully never appear.

“Im was really excited as I first saw the result of our intensive development. We had to solve a lot of issues, but when we discovered the first icebergs we were really stunning about the huge visual difference compared to the Standard X-Plane. The Artic Ice and also the Antarctic is completely missing in the default world of X-Plane flight simulator.”

“Of course, there are some really interesting external sceneries for polar region available, but they also have no icebergs/water ice included. With openVFR IcebergsXP flying in the polar seas is suddenly becoming much more interesting and there is so much to discover. The diversity of the icebergs is simply overwhelming. Since the virtual occurrence of the icebergs is based on real data, the ice landscape blends in perfectly with the rest of the scenery.”

“The intensity of the ice is already dependent on the outside temperature. That’s something the flight simulator X-Plane just missed.” said Markus Freyt. For the future openVFR has many more ideas. “We have many more ideas for the future. Of course, we will increase the variety of ice even more. It would also be interesting to land with a helicopter on top of an iceberg. Furthermore also would like to see how the icebergs influence shipping traffic. We would be happy if the X-Plane community is interested in this project, because we are really motivated to get even more out of the project.”

More information can be found on their new website for this iceberg project www.openvfr.freyt.de/IcebergsXP/