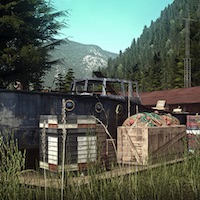 We’re pleased to share with you the following Orbx news and their release of PS01 Quatam River Airport.

According to Orbx “Quatam River Airport is a small airport in the mountains of British Columbia, Canada. The airport is located in a series of fjords and arms so although ocean water is just off the runway it is a long journey to the open sea. The airport is just meters from the Quatam River which leads up a long valley and into the tall mountains. The airport is a hub for forest workers who are clearing out the forest up and down the valley sides. The airport has been there for more than 35 years serving many purposes.”

“It features a 762-meter long dirt runway with the sea to the west. Landings to the west and takeoffs to the east are discouraged unless winds are in strong favor of said direction. This is due to 30-40 meter trees at the east end of the runway.”

Some of the features are:

Want to know all about PS01 Quatam River Airport? Then hurry and visit the dedicated Orbx store page.