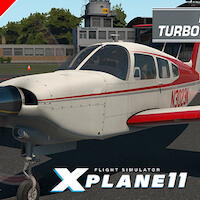 We’re pleased to inform you that Just Flight has released the Turbo Arrow III/IV for X-Plane 11.

The Turbo Arrow III and Arrow IV for X-Plane 11 each come in five paint schemes and feature PBR materials with real-time environment reflections, 4096 x 4096 textures for the highest possible texture clarity and numerous animations including a multi-animation passenger door that, when open, responds to G-forces and air resistance. The new Arrow is priced at £27.99. €34.95 or $41.99.

If you already own Just Flight’s PA-28R Arrow III add-on for X-Plane 11, you should have received an email from Just Flight with details of how to get this new Turbo Arrow III/IV at a bargain price!

Full details on both offerings are here: