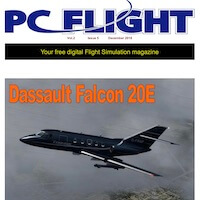 On behalf of Terry McGee and his team from PC Flight Magazine we’re pleased to inform you that there’s a new December 2018 edition.

Keep in mind that the free magazine is not only related to X-Plane 11 related articles, links to interesting free airports and so on. This time there’s no X-Plane related reviews included. The rest, and I have to say the majority, is for FSX and P3D. So actually this edition is all news related to all flight simulator programs.

According to Terry “The annual Flight Sim Weekend in Lelystad, The Netherlands took place on Saturday 3rd and Sunday 4th of November. I and Michael Collins were there where we met up with our Flight Sim Cockpit owner friends for our annual get-together. This year the show has less commercial exhibitors that previous years. However, there were enough to keep us occupied for the day. We were told that there will be a change in the organiser of commercial exhibitors which will mean a return to more exhibitors. There are photos of the show on page 51.”

Terry continues “While on the way to the show on the Saturday morning, we noticed that the new Lelystad Airport terminal had an Open Day for the locals. Of course we went in for a look around. Only the main entrance area was open, which was not yet completed but there were aviation companied there recruiting along with the airport management displaying the airport layout.”

“In his Plane Talking column, Ian eluded to my 737 Cockpit being AOG (Aircraft On Ground) for some months now. I had a problem where my Jetmax TQ suddenly became erratic, which I could not solve. So I made the decision to change to Prepar3D (P3D). Components for a new PC were ordered and assembled by my friend Padraig. P3D installed, orbx, airport scenery and the iFly 737 Pro installed mid December. I’m still grounded at the moment as I have a problem with a script file for my MCP/EFIS, which Sismo are helping me with. I can’t wait to get back in the virtual skies and rejoin the virtual pilots on VATSIM.”