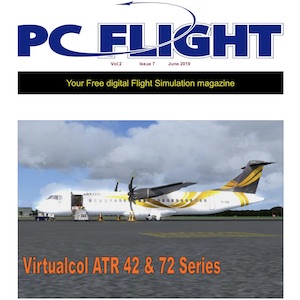 According to Terry “Summer is upon us with mixed weather but hopefully it will be fine for the Bray Air Display on 27th and 28th July. Check their website for what’s on in the air and on the ground.

Flight Sim Show 2019 in Cosford, UK will be a two day event for the first time which should increase attendance. We are unsure whether we will exhibit, so keep an eye on the show website.

Microsoft have announced their re-entry into the Flight Sim market with ‘Microsoft Flight Simulator’ for PC and X-Box. I don’t think it will be on par with Prepar3d as it has become very popular since its update to 64bit. However, it may mean more business for the add-on publishers.

In this issue, John McNeely expresses his opinion on updates and buggy software in ‘Testing Times’. In addition to his Plane Talking column, Ian Broni reports on his visit to ‘DAKS Over Normandy’. John Melville reviews the Carenado A42 500 Series and Brian Church reviews the new Navigraph Charts.”