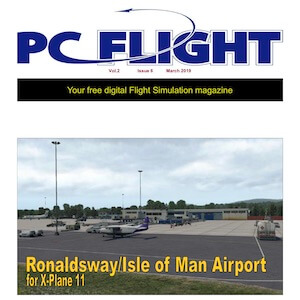 On behalf of Terry McGee and his team from PC Flight Magazine we’re pleased to inform you that there’s a new March 2019 edition.

According to Terry “Summer is almost upon us, which is normally the time when flightsim takes a back seat for some. However, it’s also the time for Aviation events such as: Aero Expo, Germany, in April, (this event includes a large Flight Sim section). Daks Over Duxford, UK in June, Newcastle Festival of Flight, Co. Down, Northern Ireland in June and the Bray Air Display, Bray Co. Wicklow, Ireland in July. I didn’t realise that there were so many Aviation Shows in Europe until I found the list on air-shows.org.uk. What a great excuse to visit our European neighbours while enjoying an Aviation Show. www.air-shows.org.uk/2018/07/ european-airshow-calendar-2019/ for the full list of events.”