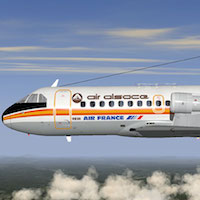 Peter Hager could like to inform you that he has released his old-fashioned payware VFW 614 aircraft.

The VFW 614 was designed as a short haul airliner, capable of using short and rough runways. The 3D cockpit shows and simulates all flight relevant systems, which were installed on the civil airliners, with a high degree of authenticy. I travelled three times to the Aeronauticum museum, to explore their conserved VFW 614, where I shot hundreds of fotos.

The panel is filled up with traditional round instruments, all carefully rebuilt after the real ones, not using any default XP instruments. Pressurization is controlled manually. So you should not forget the settings! – Some of the special instruments mounted on the military version are also installed. Due to a total lack of respective documentation we were unable to make all of them alive.

The autopilot from the 1970s basically uses pitch and roll mode. In XP the nose-wheel tiller axis controls the roll angle, as soon as engaged, while the landing gear is retracted. It’s really fun to fly this way! But also HDG, LAT NAV, ALT HOLD, GS and IAS modes are available, as well as Backcourse and Turbulence modes. Certainly ILS approaches are supported. The aircraft was not approved for autoland.

But there’s so much more to read about this payware add-on aircraft. Check it out at the dedicated web page from Peters Aircraft.