Hmmm! The Boeing B-52 Stratofortress was not a review title I had in mind. On the other hand, it’s an impressive aircraft, so why not review it and it’s fun too? I found this “modified” aircraft a while ago on X-Plane.Org, uploaded by “depas57”.

According to the uploader depas57, “Basically, this is the default B-52 with the addition of a 3D cockpit. Although I must admit that some changes have been made on the original model. The pod launch of the X-15 has been removed, as well as burns on the right wing and right flap are back to normal. Further on, I added pylons for 6 AGM-86 air launched cruise missiles.
The Auto Pilot is fitted in the center console. To set speed and altitude, just click directly on the numbers and to adjust the vertical speed just turn the wheel located near the knob with the B-52 image.”

Normally, I would not fly a huge aircraft like this, but since it’s basically a modified default B-52, I thought, let’s give it a chance.

The Real B-52 Stratofortress

The Boeing B-52 is a long-range, subsonic, jet-powered strategic bomber. The B-52 was designed and built by Boeing, which has continued to provide support and upgrades. It has been operated by the United State Air Force (USAF) since the 1950s. The bomber carries up to 70,000 pounds (31,752 kilograms) of weapons.

Beginning with the successful contract bid in June 1946, the B-52 design evolved from a straight-wing aircraft powered by six turboprop engines to the final prototype YB-52 with eight turbojet engines and swept wings. The B-52 took its maiden flight in April 1952.

Built to carry nuclear weapons for Cold War era deterrence missions, the B-52 Stratofortress replaced the Convair B-36. Although a veteran of several wars, the B-52 has dropped only conventional munitions in combat. The B-52’s official name Stratofortress has been used rarely in informal circumstances. It has become common to refer to the aircraft as the BUFF (Big Ugly Fat Fucker).

The B-52 has been in active service with the USAF since 1955. As of 2012, 85 remain on active duty with nine in reserve. The bombers flew under the Strategic Air Command (SAC) until it was inactivated in 1992 and its aircraft absorbed into the Air Combat Command (ACC). In 2010 all B-52 Stratofortresses were transferred from the ACC to the new Air Force Global Strike Command (AFGSC).

Superior performance at high subsonic speeds and relatively low operating costs have kept the B-52 in service despite the advent of later aircraft, including the canceled Mach 3 North American XB-70 Valkyrie, the variable-geometry Rockwell B-1B Lancer and the stealth Northrop Grumman B-2 Spirit. The B-52 marked its 50th anniversary of continuous service with its original operator in 2005 and after being upgraded between 2013 and 2015 it will serve into the 2040s.

More information about the B-52 Stratofortress can be found at Wikipedia or have a look at the official Boeing B-52 web page.

I can tell you that there’s a huge difference between the default XP10 B-52 NASA and the one uploaded by depas57.

As stated in the ORG upload, the modified B-52 comes with a complete 3D cockpit and for freeware I must say it’s not bad at all. OK, you won’t find photo-real material for the instrument panels, but the location and the kind of instruments are quite the same as the real ones. To see that difference, check the two pictures below. The upper photo represents a real non-modified cockpit with old-fashioned instruments, while the lower screen shot represents “depas57” 3D cockpit. 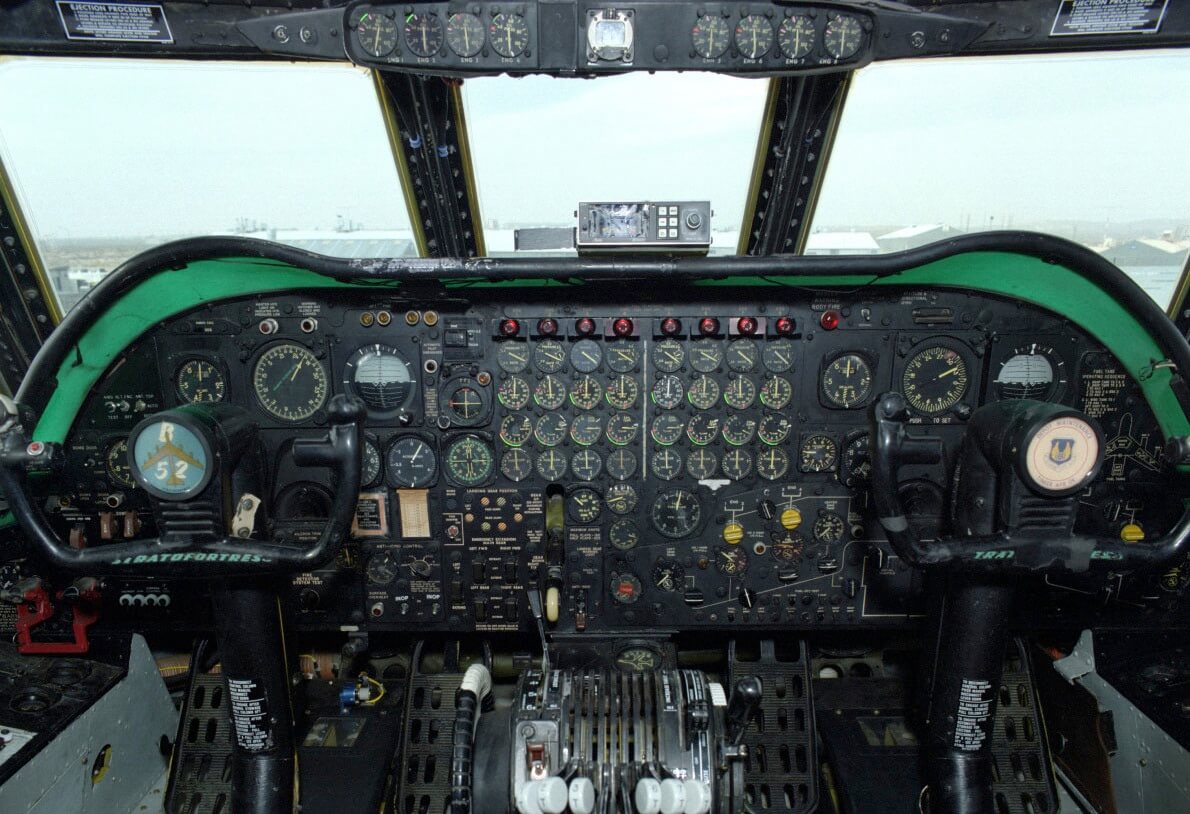 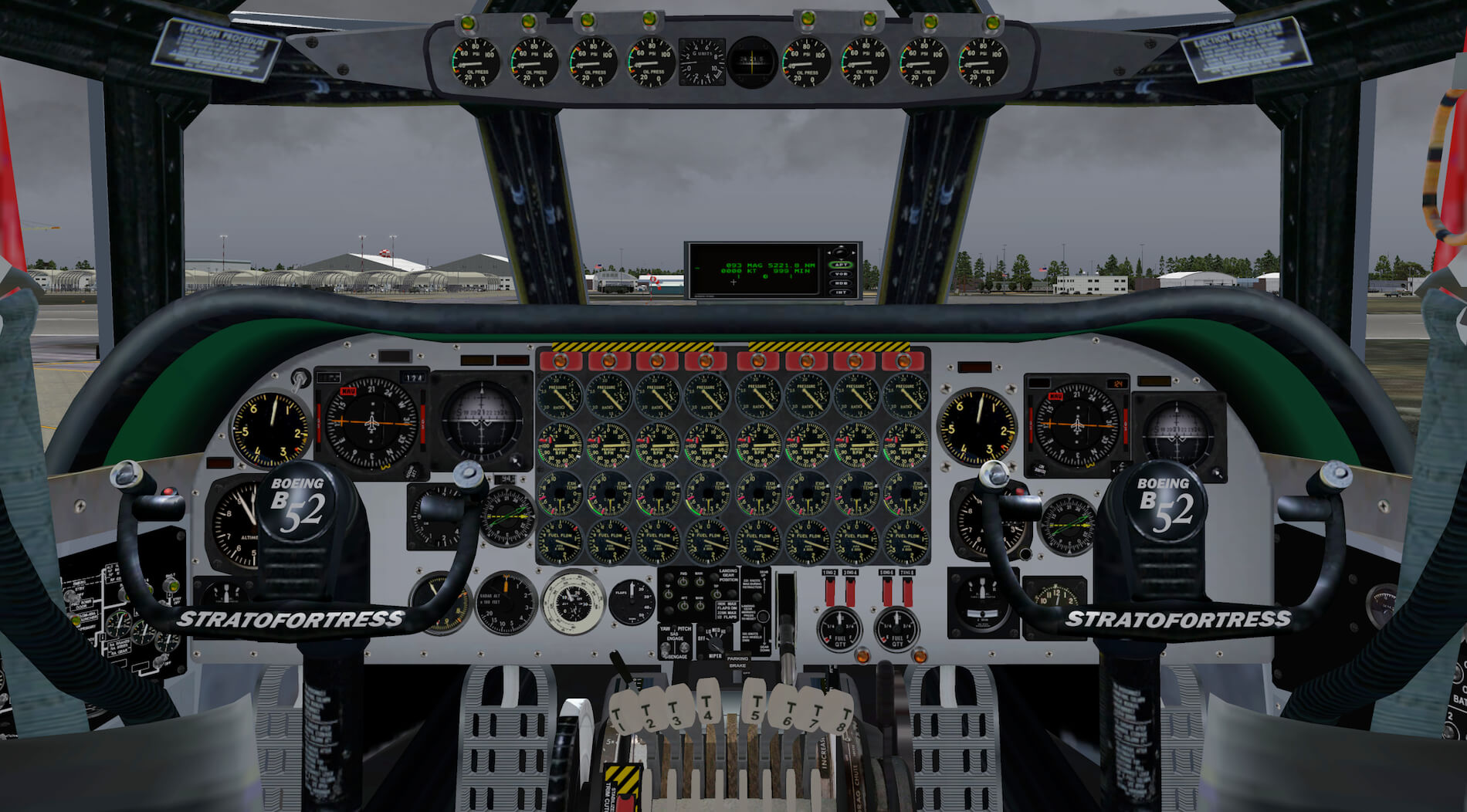 Besides a few other cockpit items, I believe it’s well made and it isn’t a frame rate consuming cockpit. Externally, there’s not much difference except that the X-15 pod, mounted on the left-hand wing, is removed. Instead of the X-15 pod, on each wing, between the fuselage and first set of two engines, you’ll now find three AGM-86 missiles. The first screen shots show you a default XP10 B-52 external view, while the second screen shot is the modified external model. 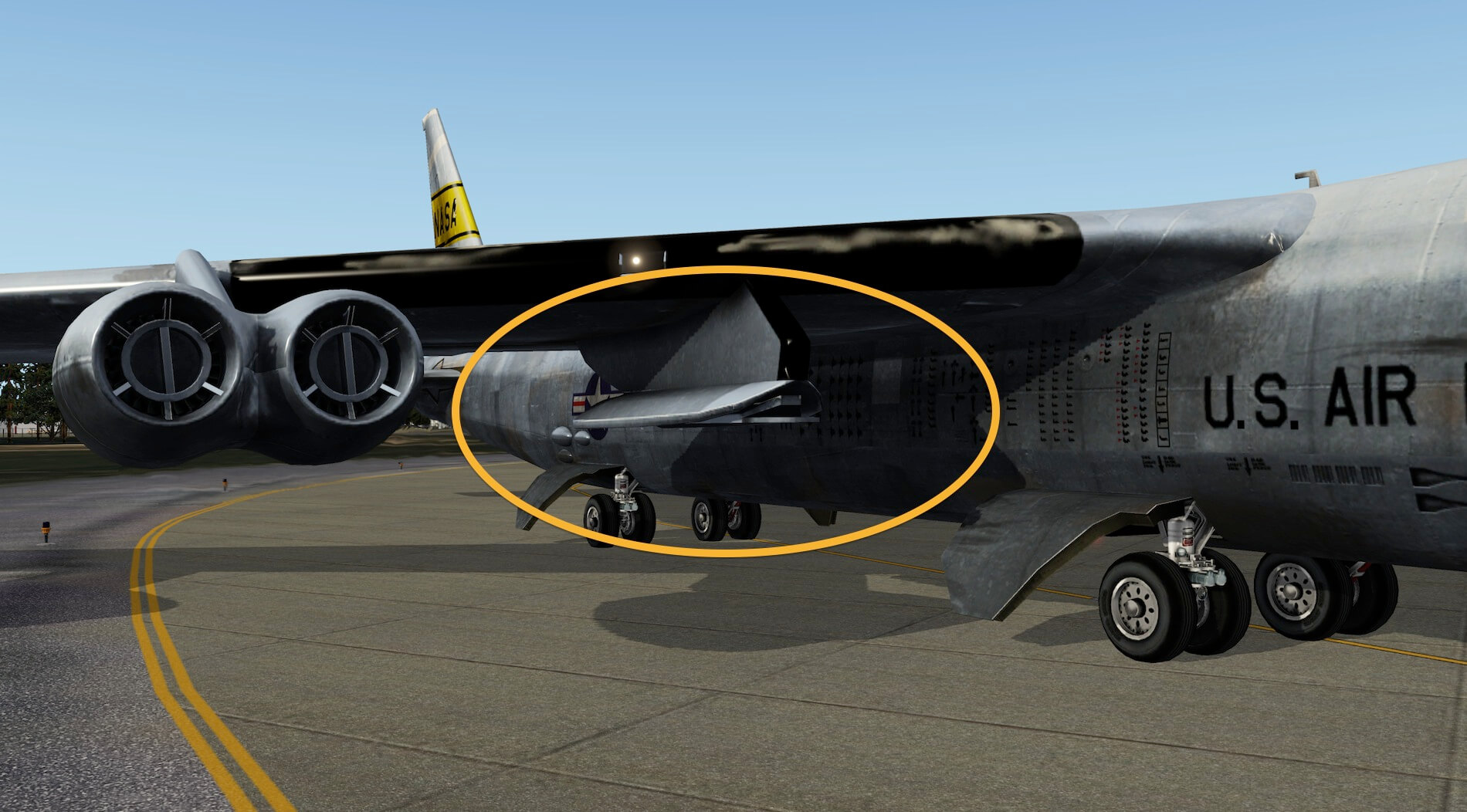 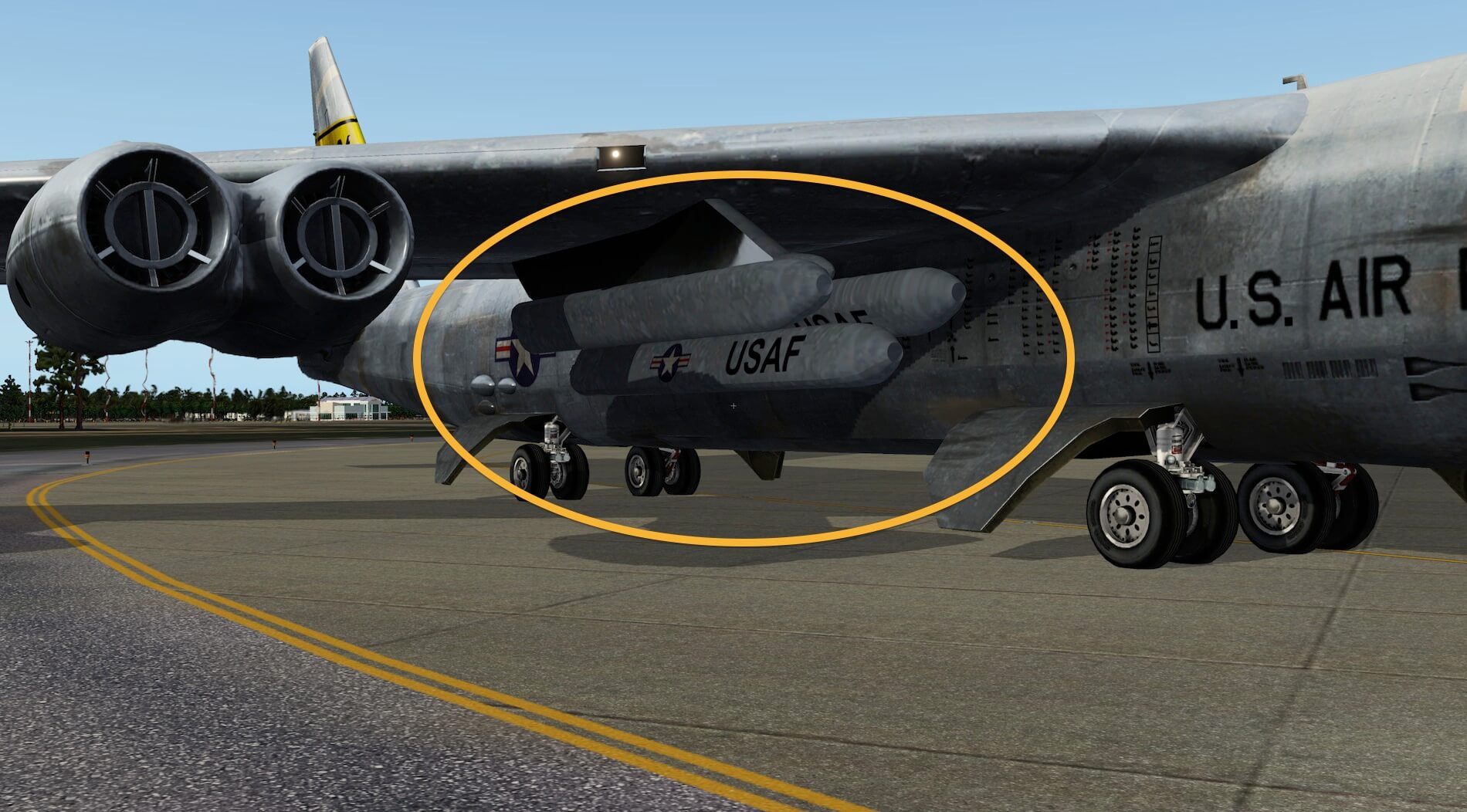 She’s not really a beauty, is she?
Beauty or not, this has nothing to do with the modifications on the external B-52 made by “depas57”. The aircraft is basically the same, except for a few changes discussed before. Even for a default X-Plane 10 bomber it isn’t bad at all. It could be better, but that’s always true for default XP aircraft. Although only the X-15 pod is removed and AGM-86 missile fittings are added, I still think it’s worth it to show you some screen shots of “deaps57” modified external B-52 Stratofortress. 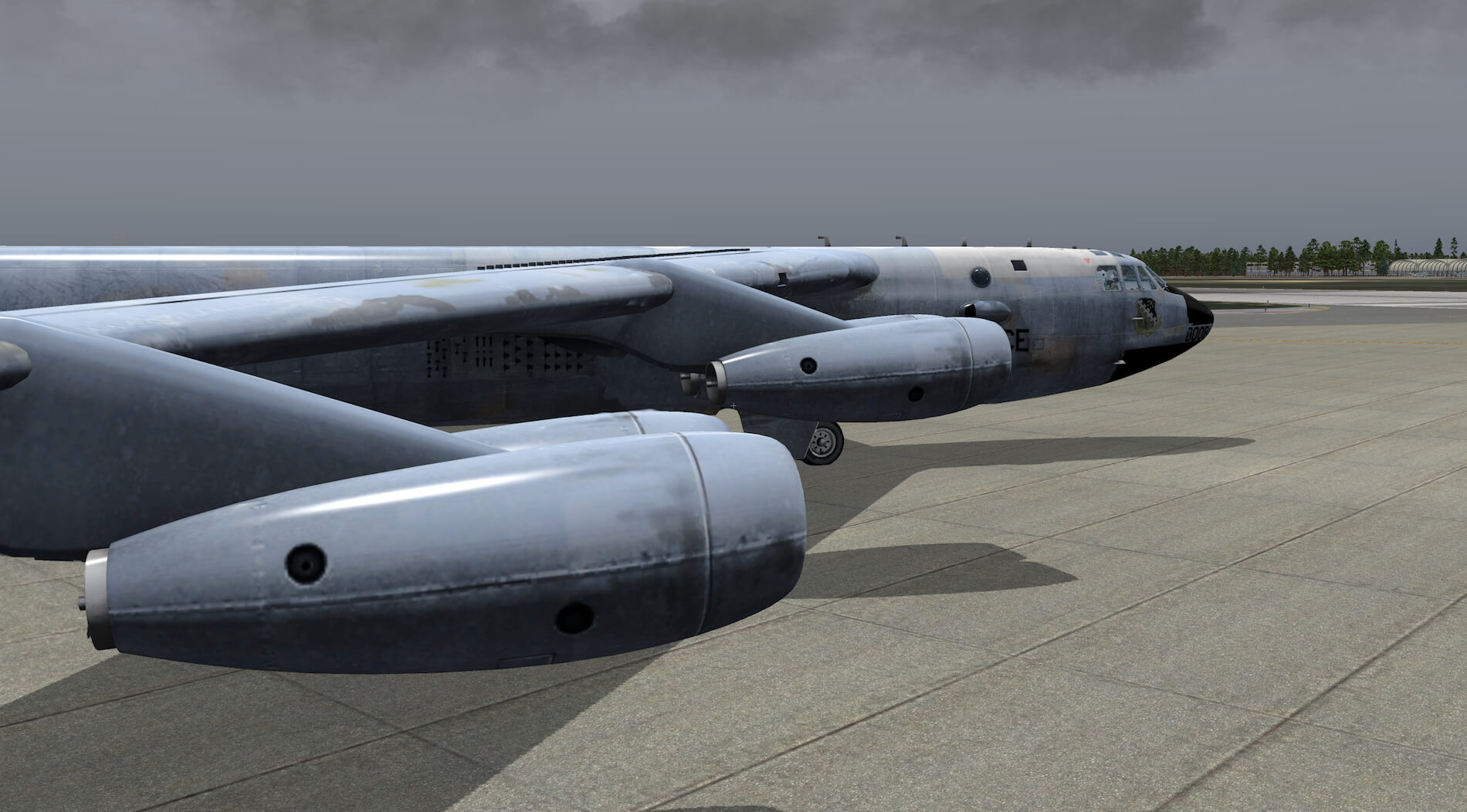 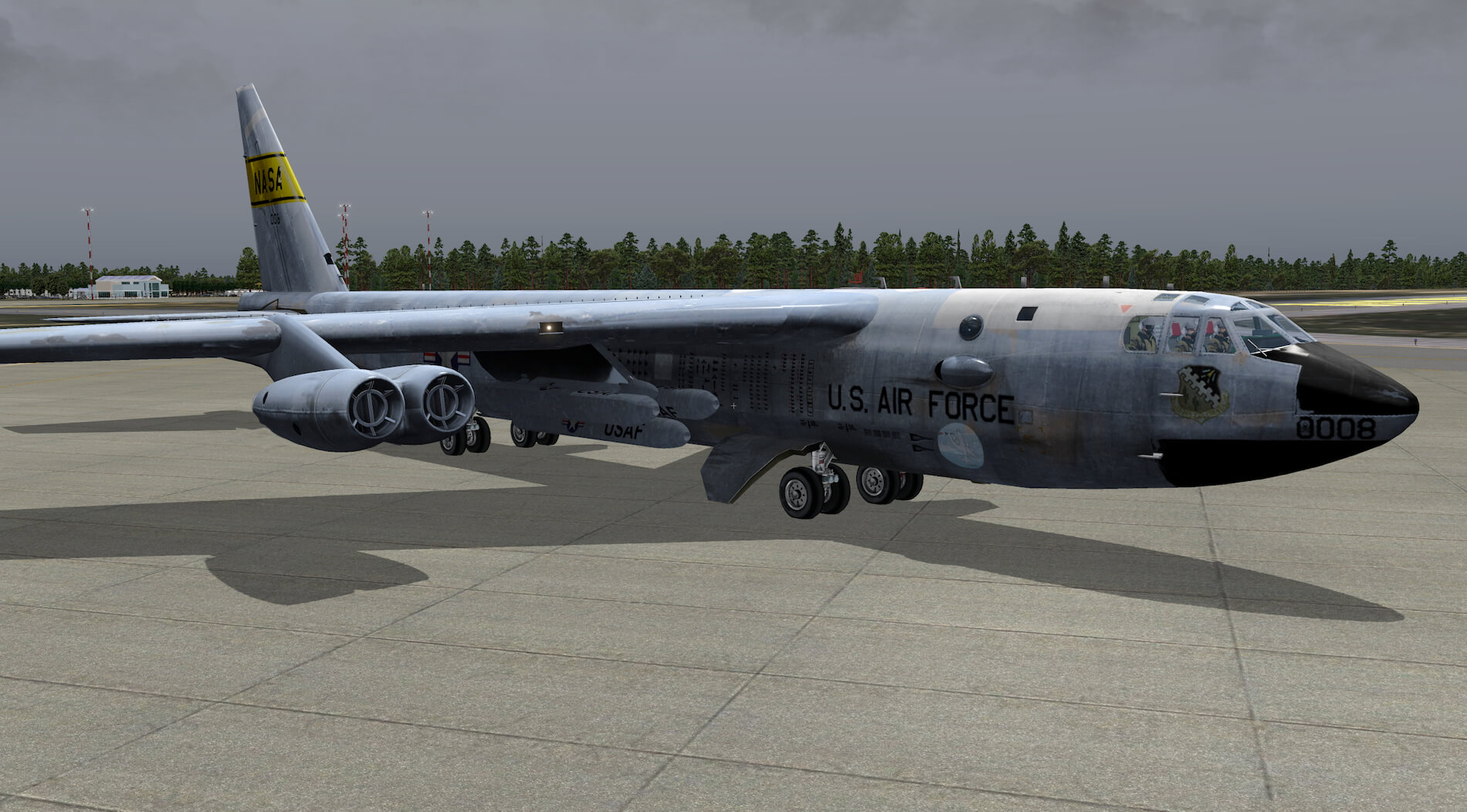 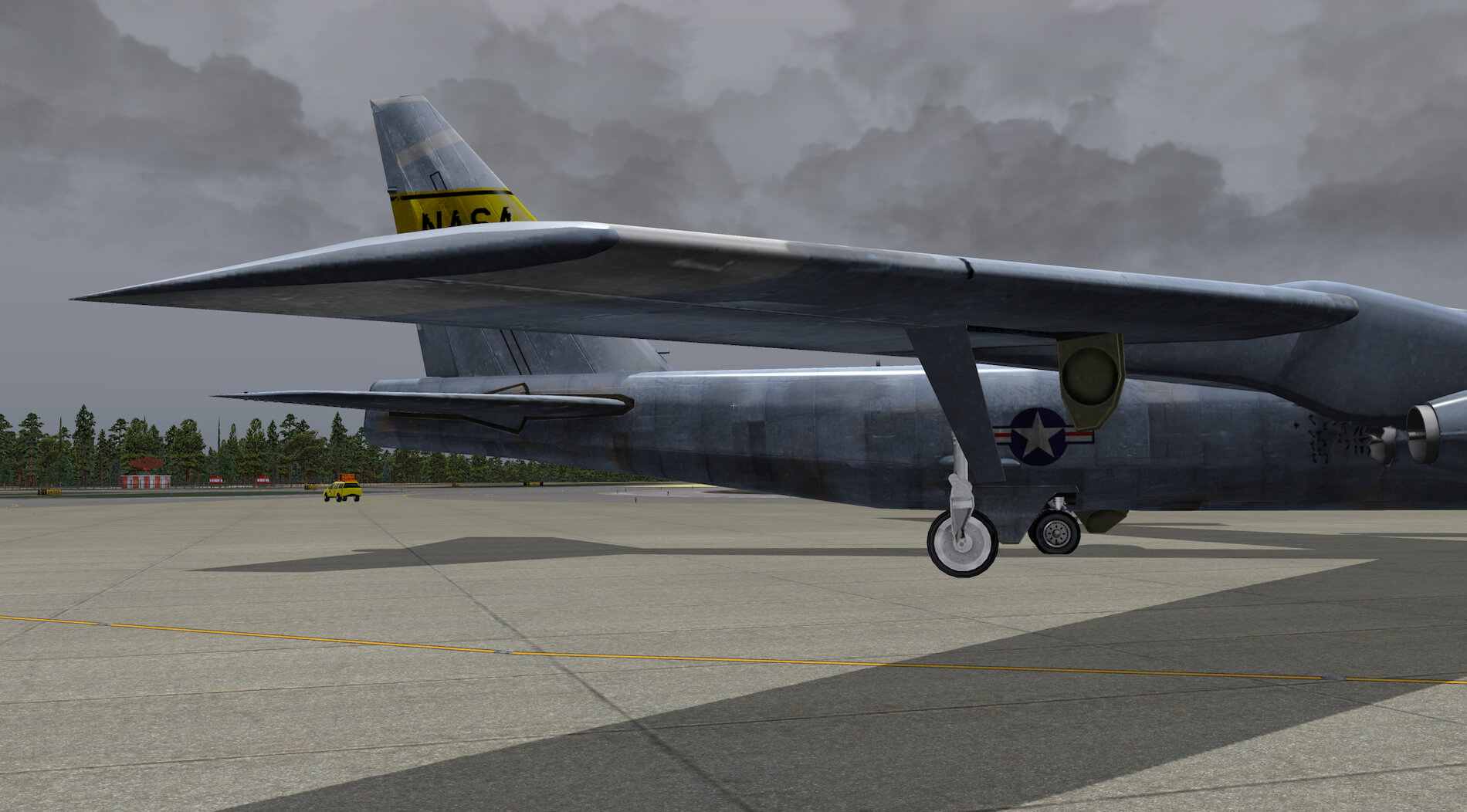 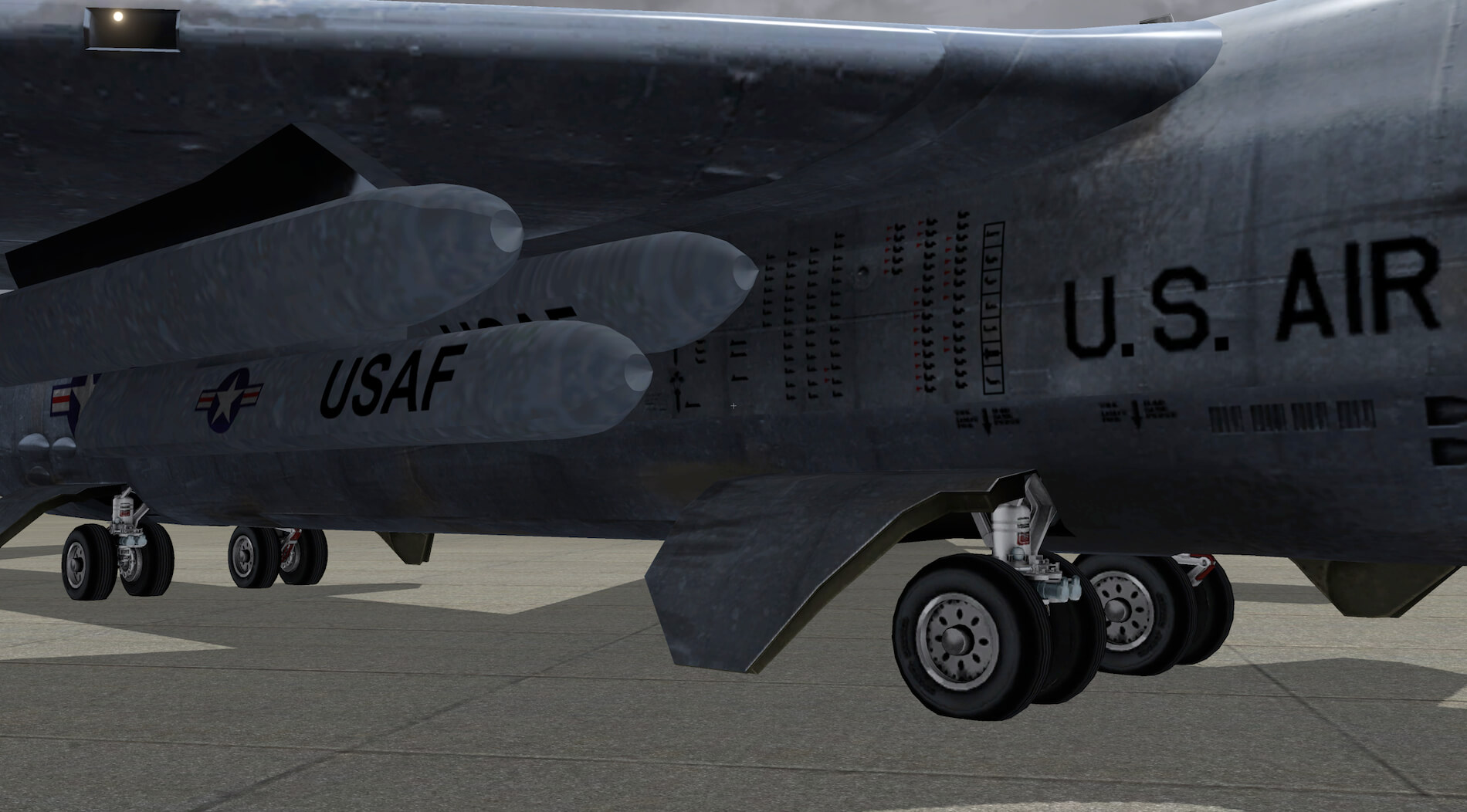 Although originally for X-Plane 10, it is still available as “old” aircraft in X-Plane 11, but that’s the default without a 3D cockpit. Without that, I don’t like it, so lets try if the package from “depas57” also works with X-Plane 11. For some reason the 3D cockpit flickers in X-Plane 11 so this is not good. This will be, for those who love X-Plane 11 or having only X-Plane 11 installed on their Mac or computer, a disappointment.

I mentioned earlier that you wouldn’t find any photo-real material in the 3D cockpit or Virtual Cockpit, however you prefer to describe it. I need to correct myself about that, because a closer look in the 3D showed me that there is some photo-real material used. The typical green lower side of the glareshield is very similar to the real one as well as the position of the instruments. I’m not sure if some default instruments are used or that some are dedicated and made for the B-52. The control wheel horn is a mix of photo-real material too and looks very real.

The only thing I noticed that differs from “depas57” cockpit compared to the real photo I have, is the instrument panel itself. The photo shows me that it is painted black while the modeled B-52 is gray. Perhaps he had a good reason to make it grey instead of black. When it comes to the functionality, it doesn’t make any difference as long as it isn’t yellow, pink or magenta! 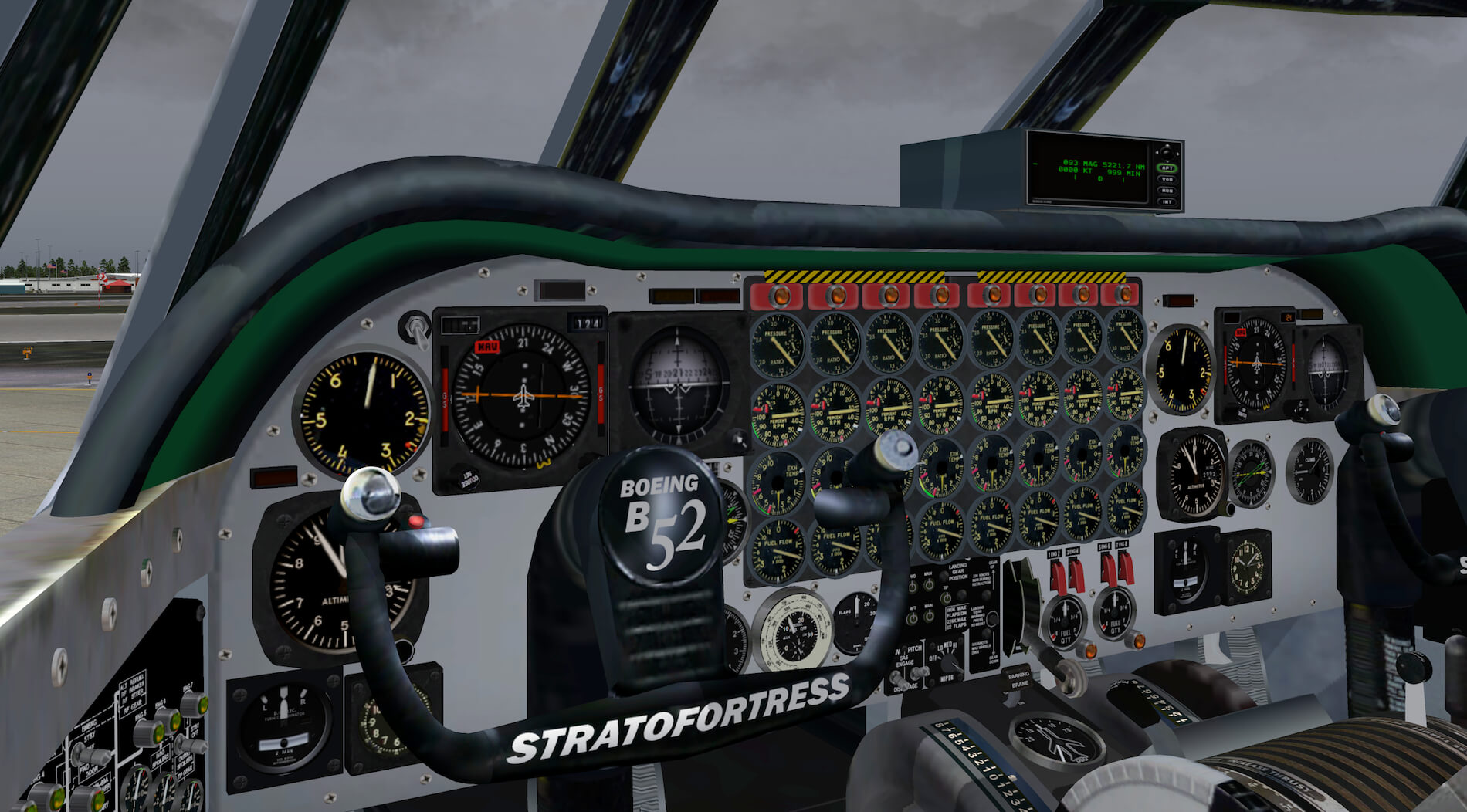 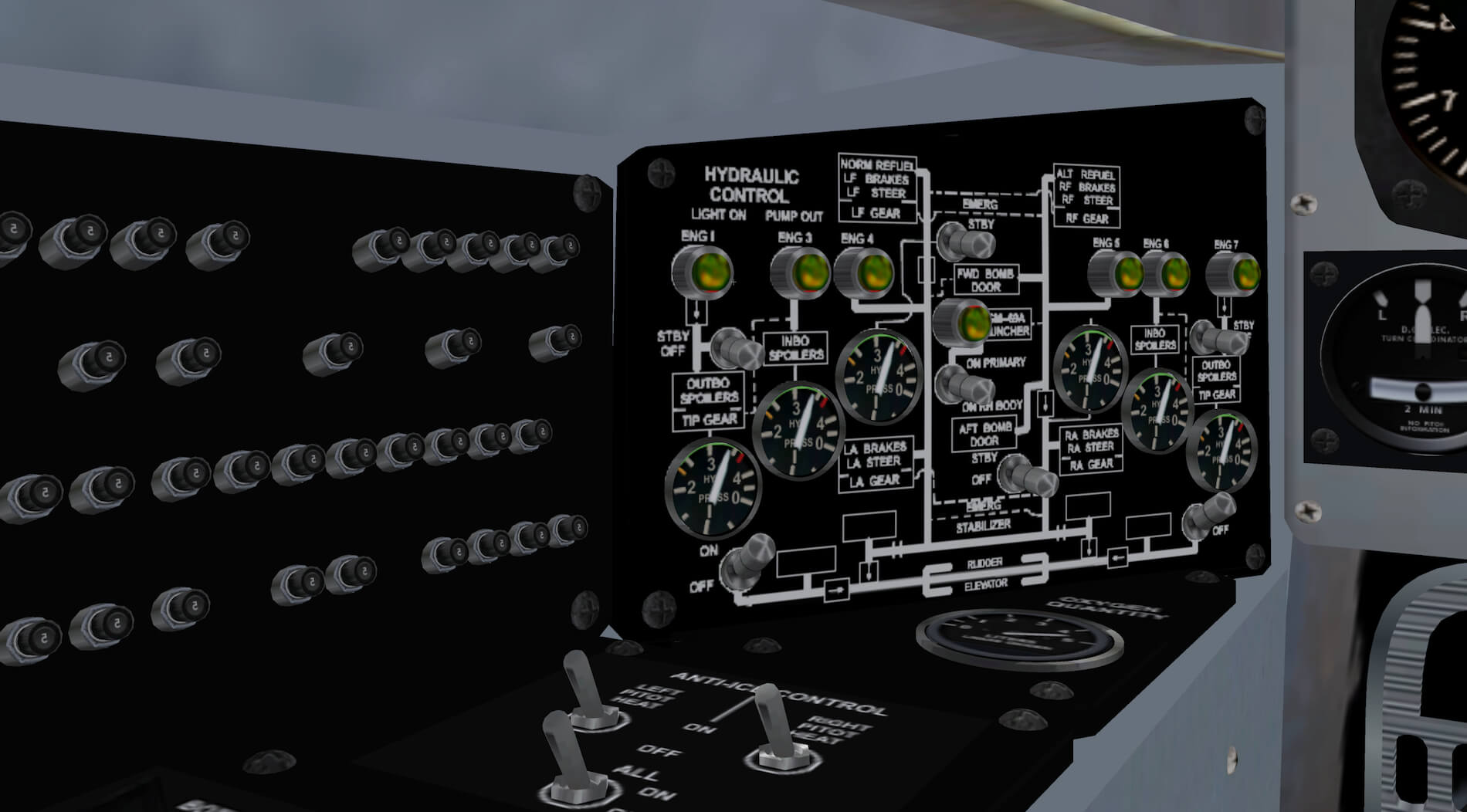 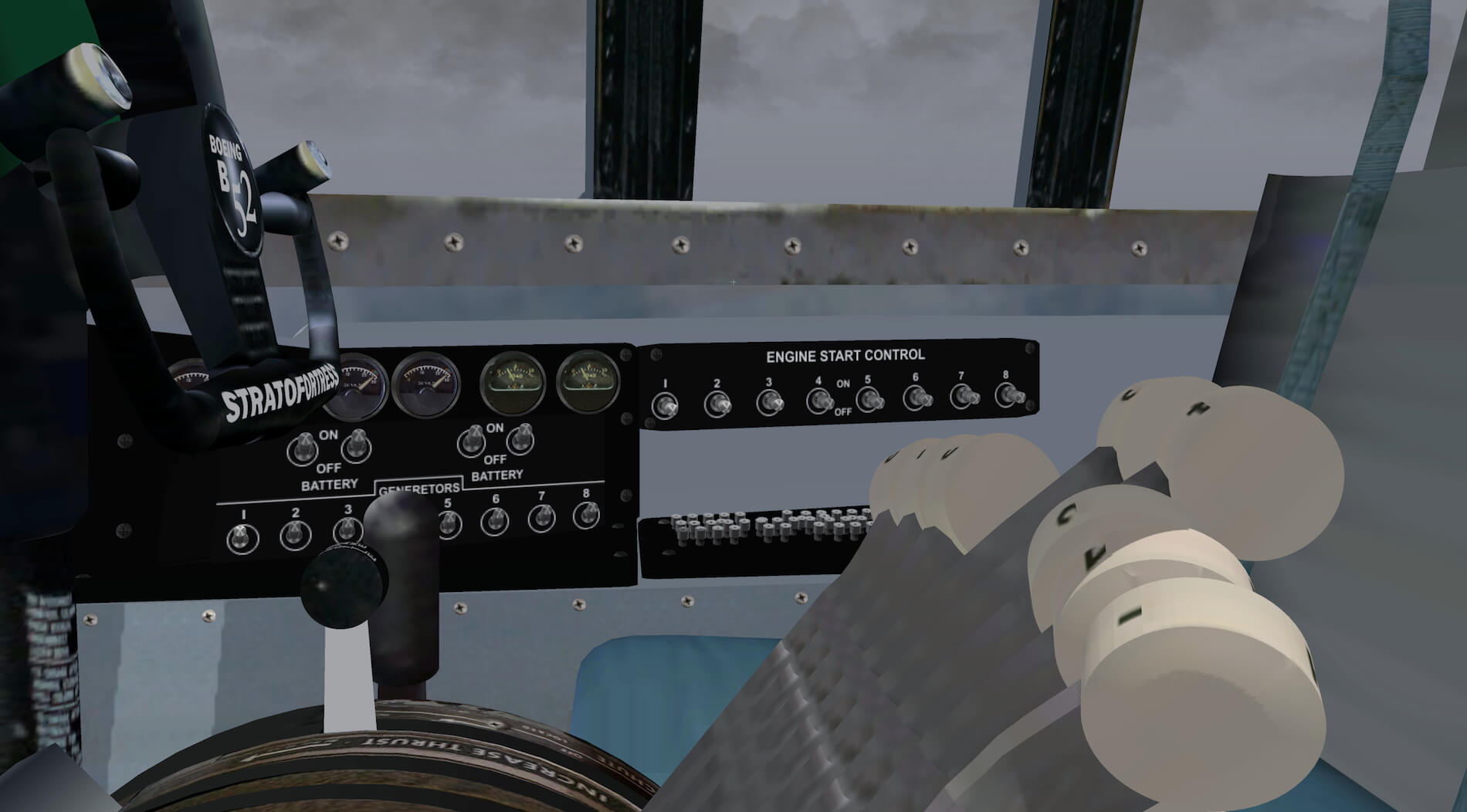 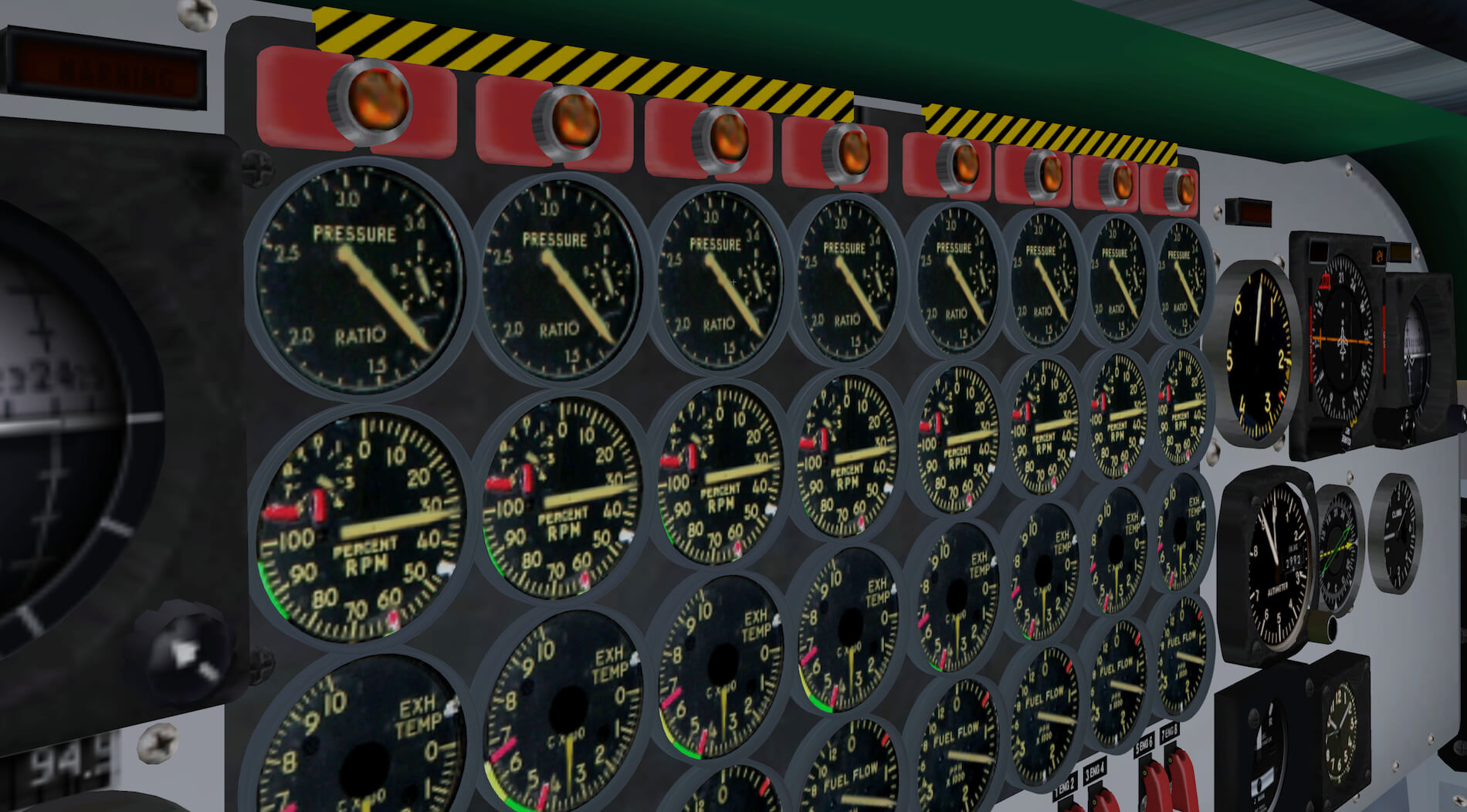 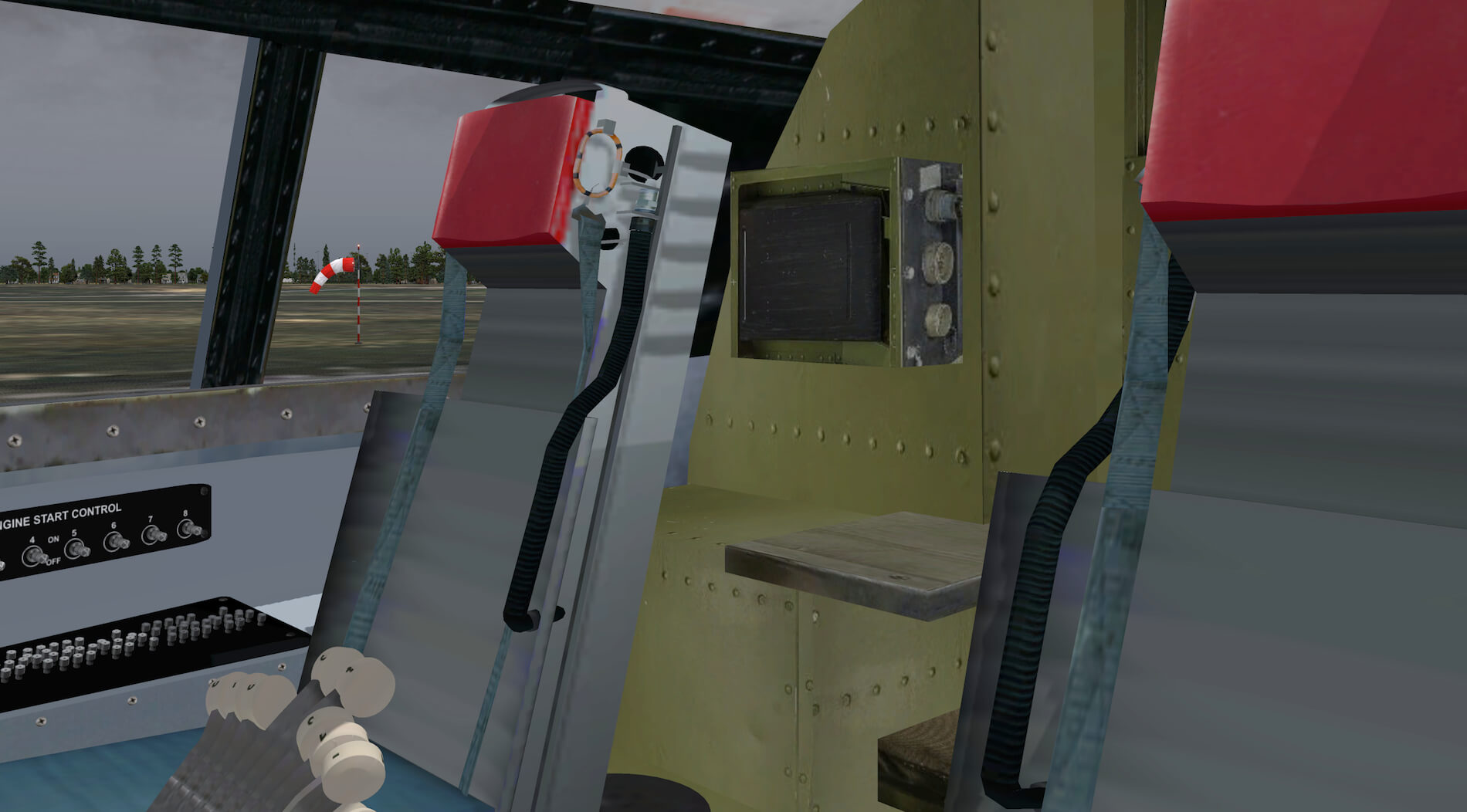 Most of the instruments are OK, although some of them are a little blurry when zoomed in. Panel text is OK from a distance as well as when you’ve zoomed in. There’s not really an overhead panel since the aircraft’s construction has many windows in the cockpit area. On the other hand, what’s modeled is nice and comes very close to the real B-52 cockpit.

In the first part of this section you’ll find some engine OIL PRESS indicators and further upwards in this order the AERIAL REFUELING panel, COM and NAV panels, ATC control panel, external and integral LIGHT CONTROLS and the JETTISON CONTROL panel. Further upwards are only circuit breakers. 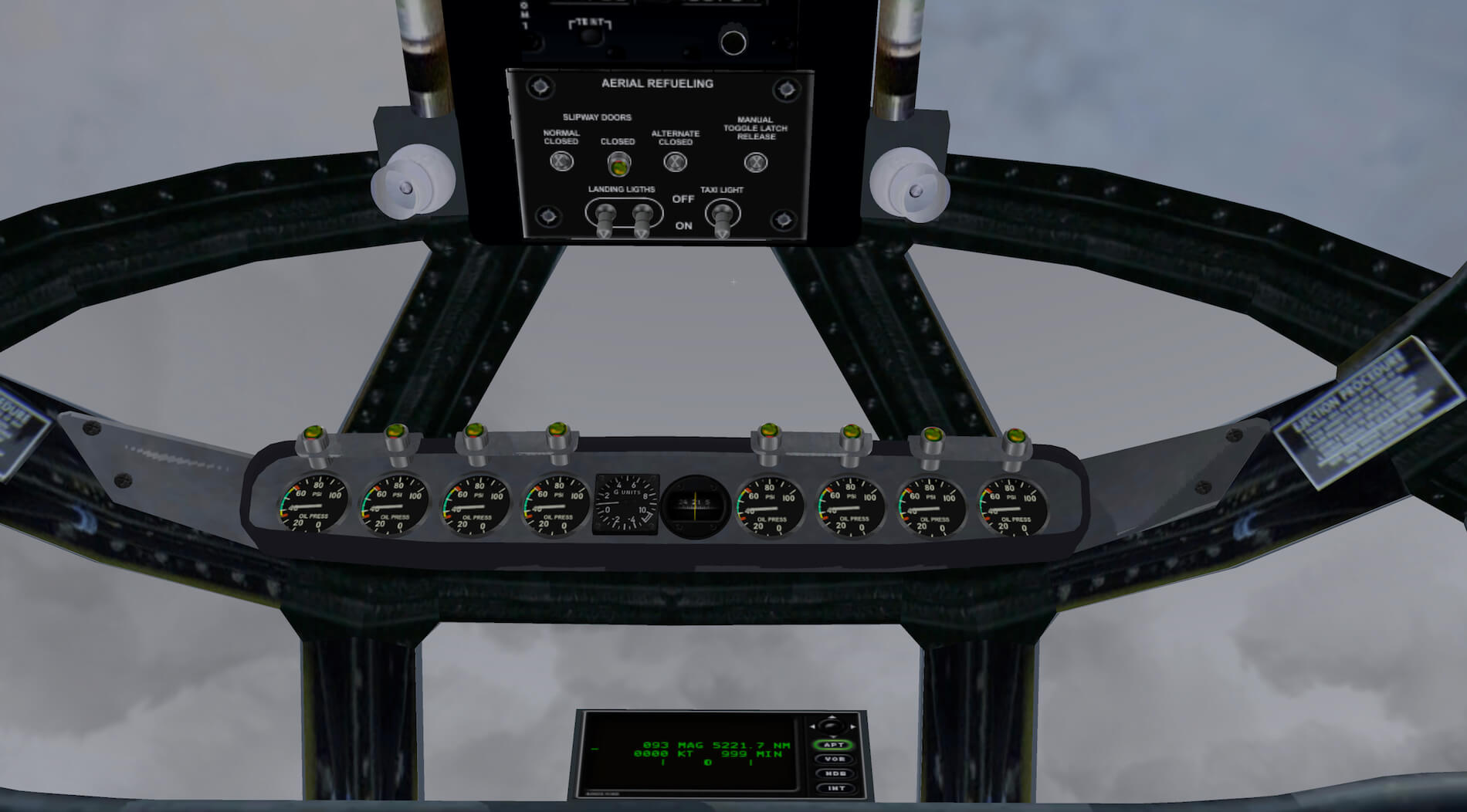 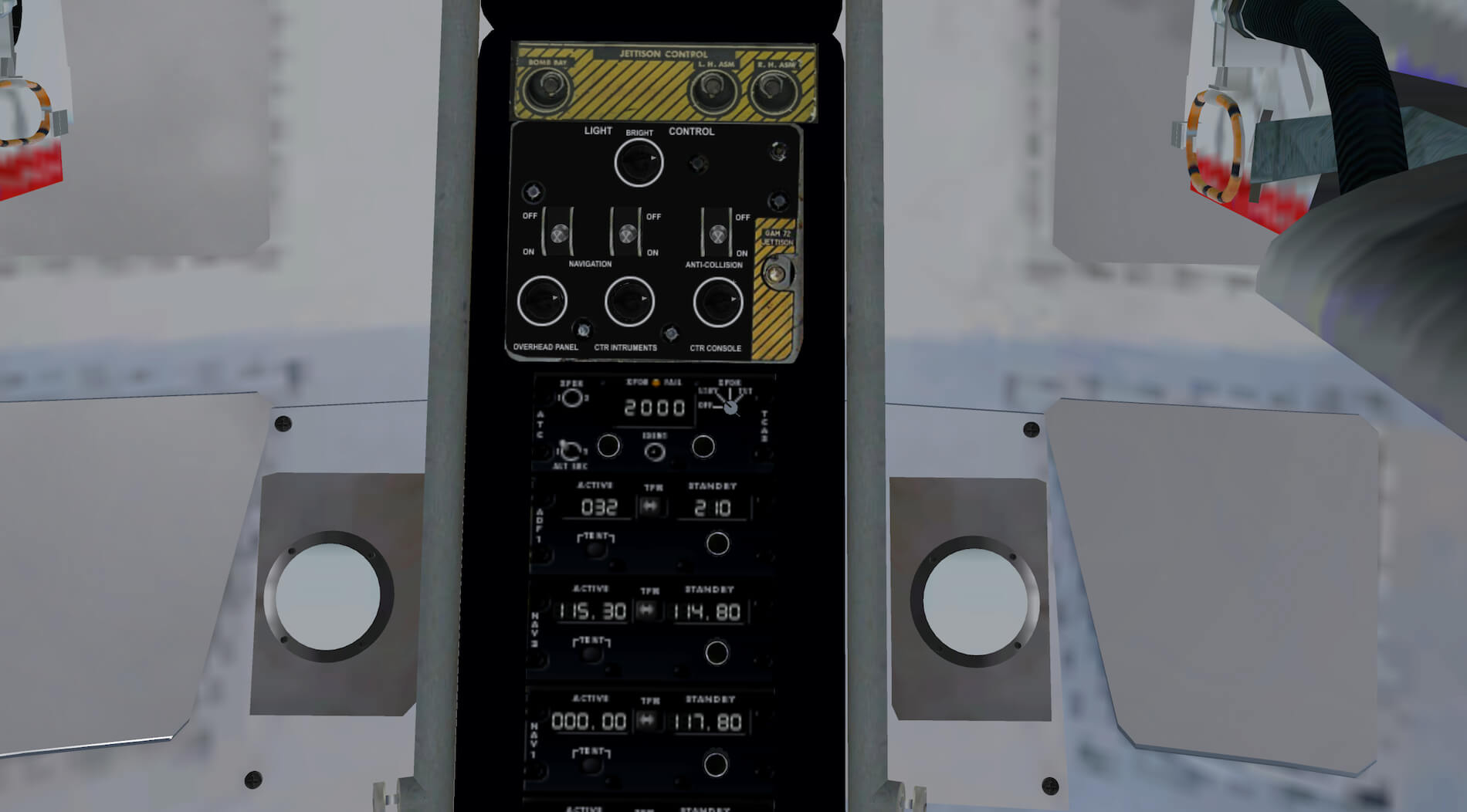 And finally, the pedestal, assuming it’s named like this since Boeing uses “P” numbers for identifying panels. But I’m quite sure you know what the pedestal is!

The pedestal is also a mixture between photo-real material and handmade parts. It’s a mesh of handles on the pedestal, but that’s the consequences of having eight engines. You’ll find eight throttle handles and eight push handles, I think for the third crew member. Trims can be found on the pedestal too and not unimportantly, the Auto Pilot control panel, which is a BASIC AP and normal for aircraft of those days.

You won’t find a virtual cabin, but I think you can live with it. I can! I think it’s time for a test flight with the “depas57” modified B-52 and interesting looking 3D cockpit. 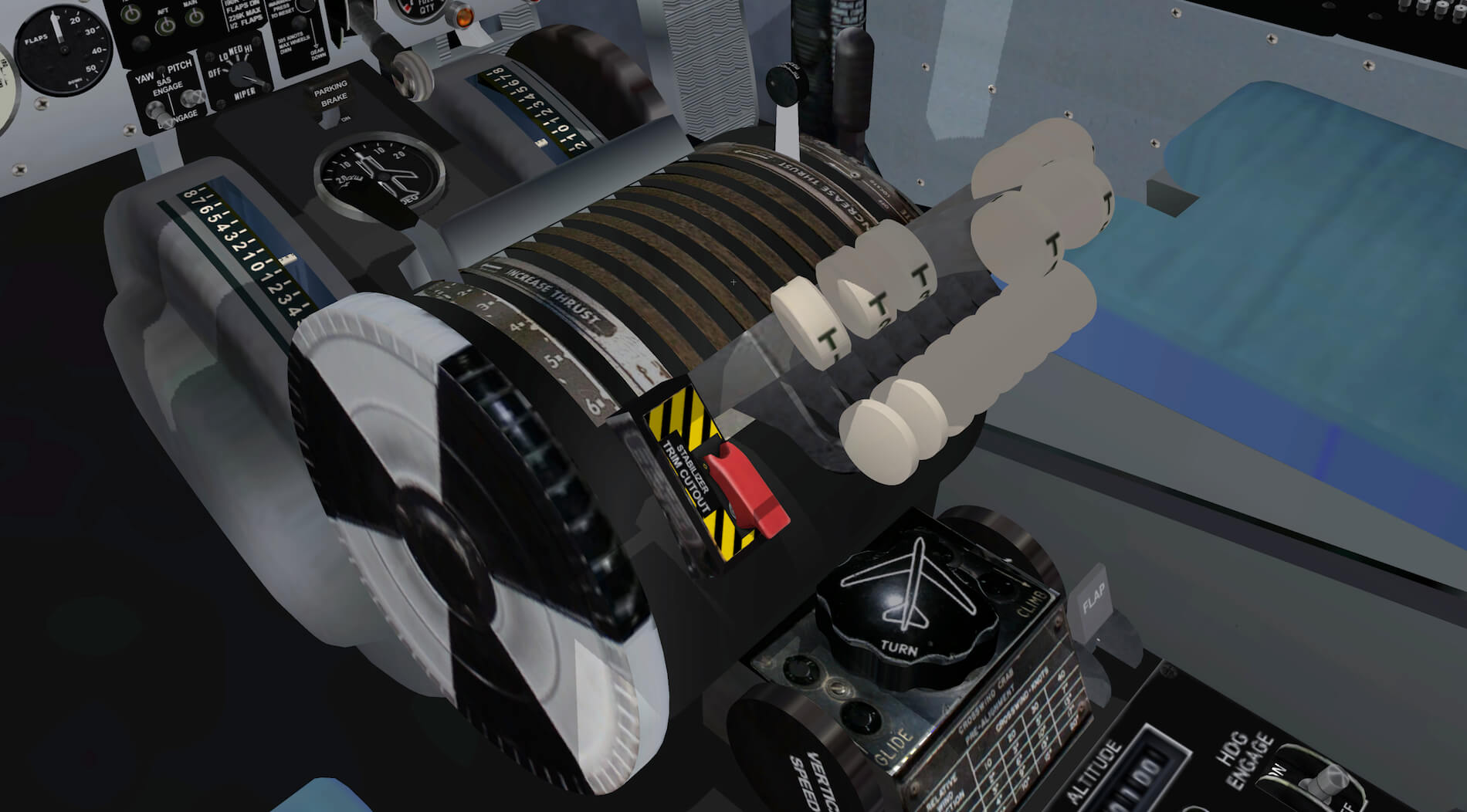 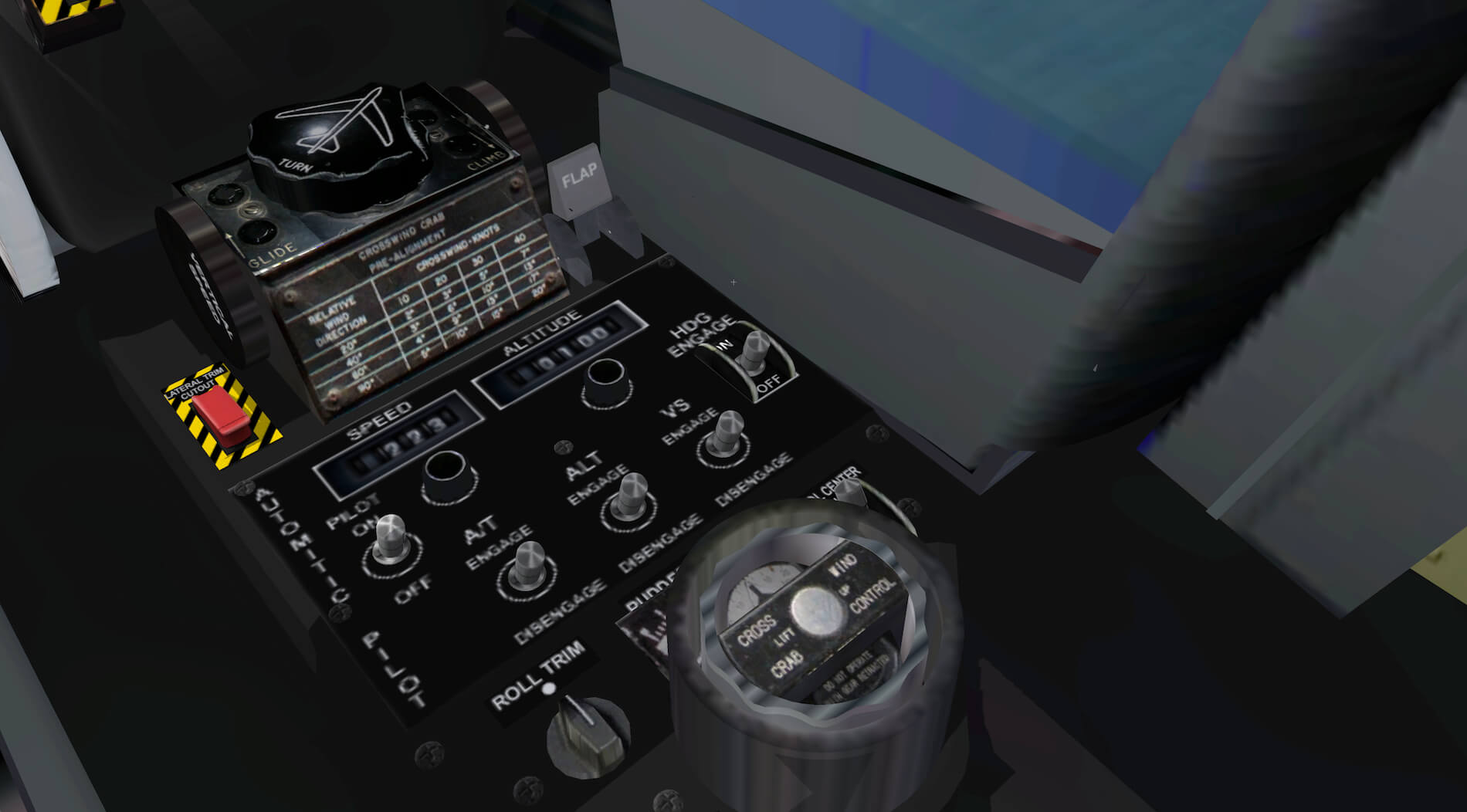 Assuming that the flight dynamics aren’t changed by “depas57”, the default XP10 B-52 will fly the same, although I have no clue how a huge aircraft with eight engines flies. For me, it’s more a matter of how the 3D cockpit works and does it do what I want. I decided to depart from NAPS (North Atlantic & Pacific Sceneries)/ Freddy De Pues’s Eglin AFB (KVPS) from runway 12. That should work, but it could be that climbing out to a safe altitude won’t go as quickly as I expect. We’ll see!

Taxing a B-52 Stratofortress isn’t complex. At least, that’s what I assume. If it taxies as the real B-52, who knows! I have enough sight view from my left-hand seat to follow the taxiways to runway 12. 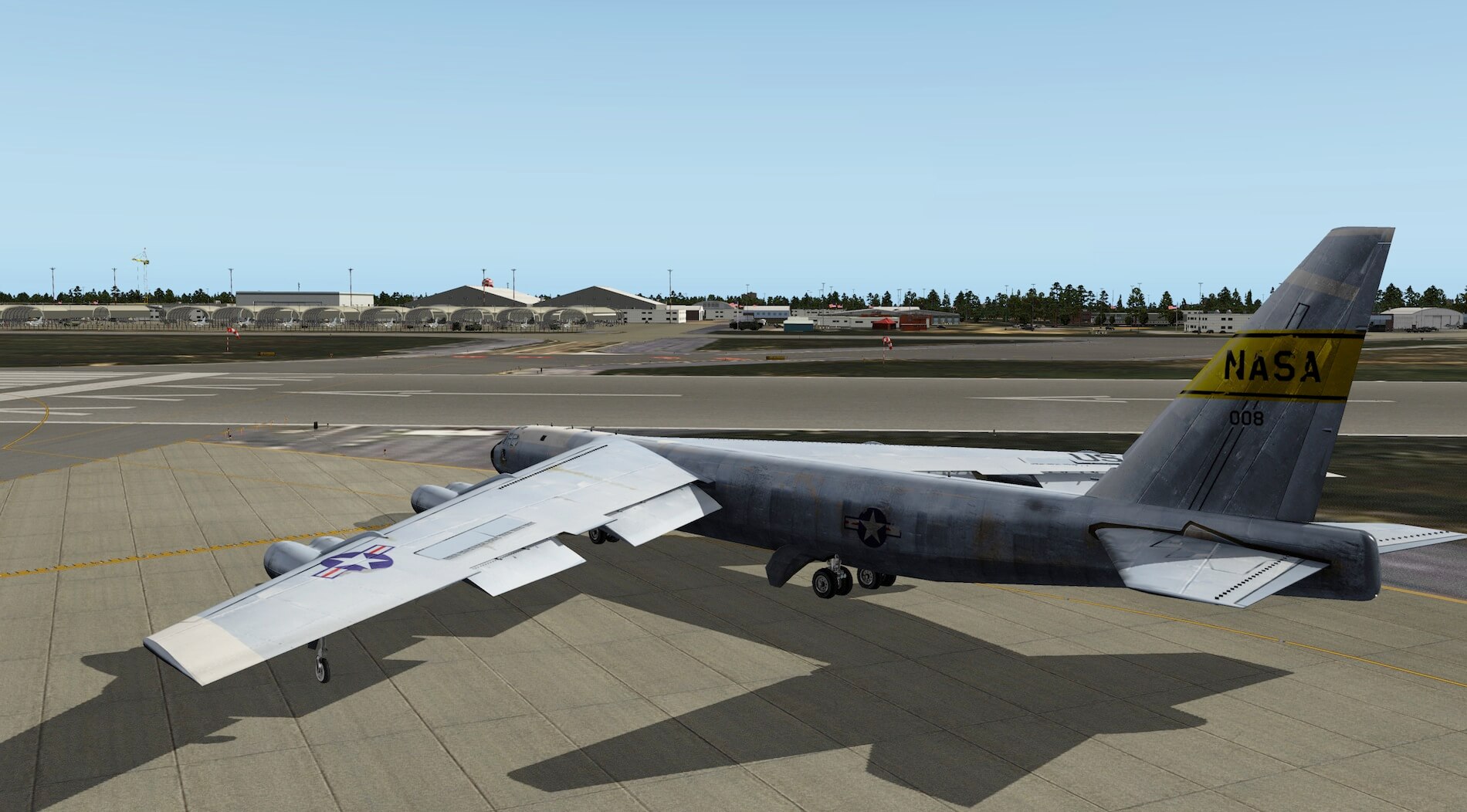 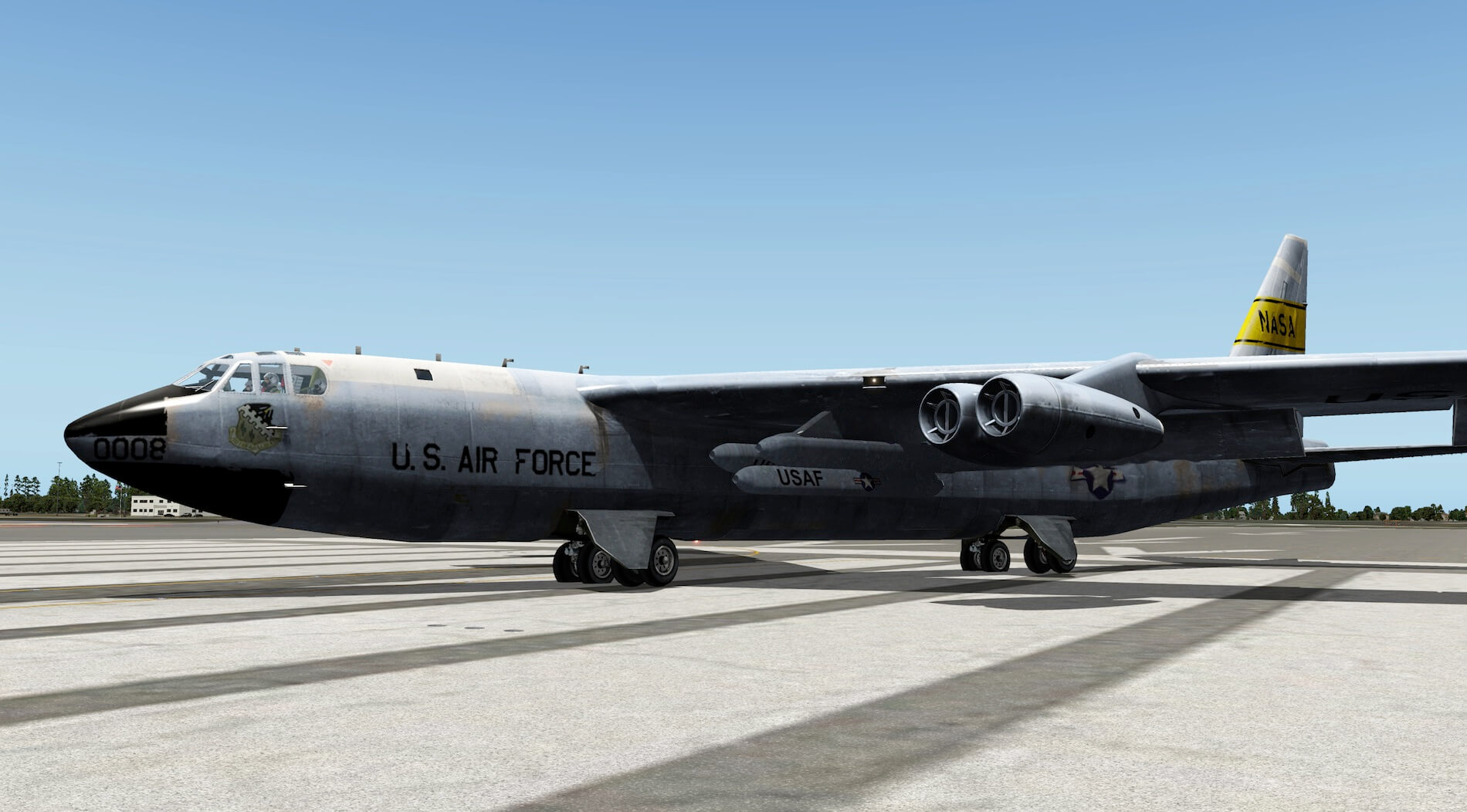 It may be no Speedy Gonzales, but it flies wonderfully. OK, that’s not so important since what I want to know is how the Auto Pilot works. The aircraft is fitted with a BASIC AP, as I mentioned previously, so don’t expect too many AP functions. Hold on, not too many? You can set and select any SPEED or IAS you want and the same is applicable for altitude.

Then you’ll find a HDG (heading) knob, ALT and V/S switch. Depending on what you’ve selected, the AP switch engages or disengages. The result is that every mode I used worked. The fitted AP panel is using all default XP10 AP functions, but it all works.

Once the AP is engaged, I have the time to look around via the windshields and a closer look at the 3D cockpit. Well, there are a view things that could be better, but remember, it’s freeware and I’ve seen payware aircraft with the same or even lower quality 3D cockpits, so that’s not really a reason to complain. After some time, I decided not to climb to the normal cruising level and decided to return to Eglin AFB. Again, I’m only interested how the 3D cockpit behaves. 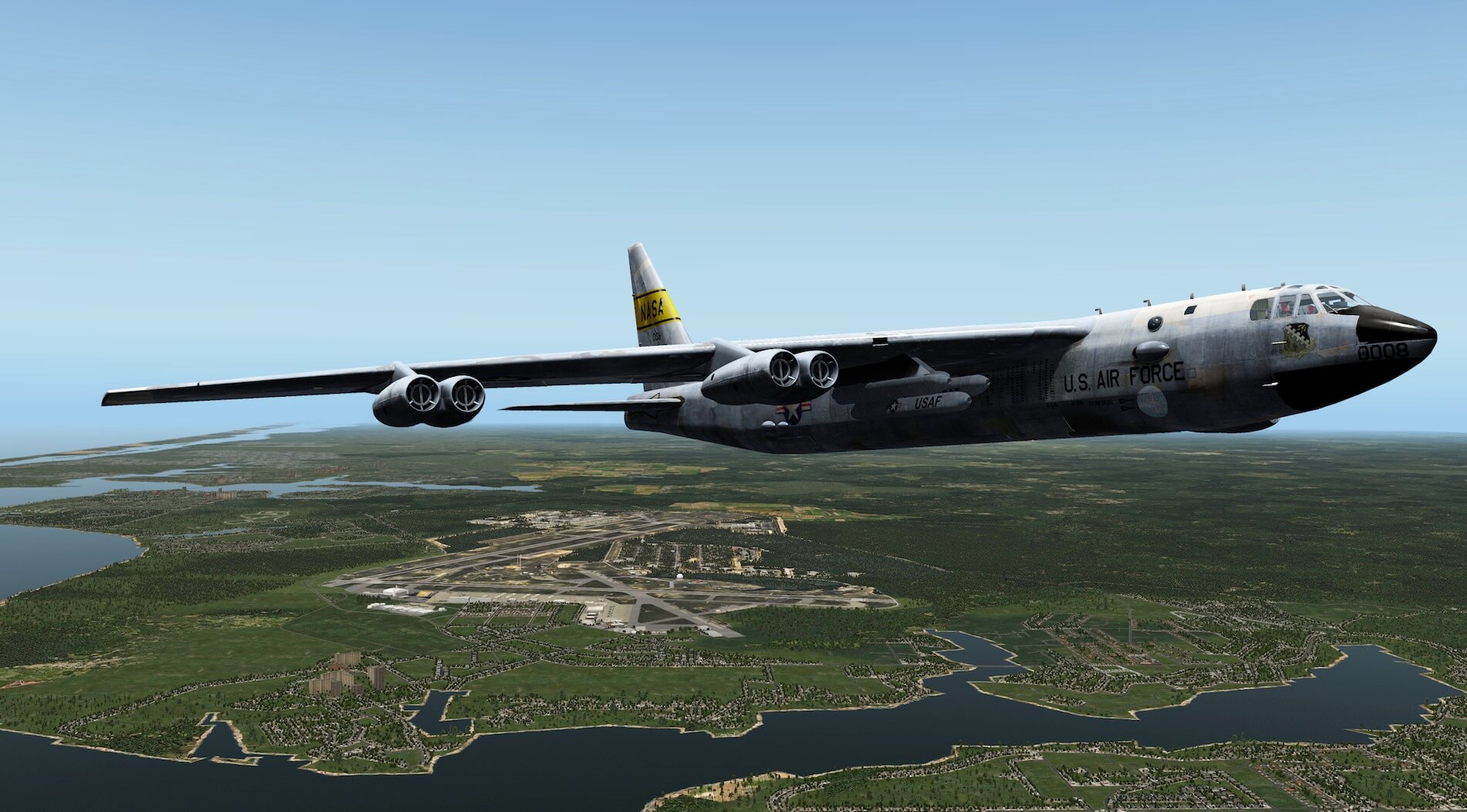 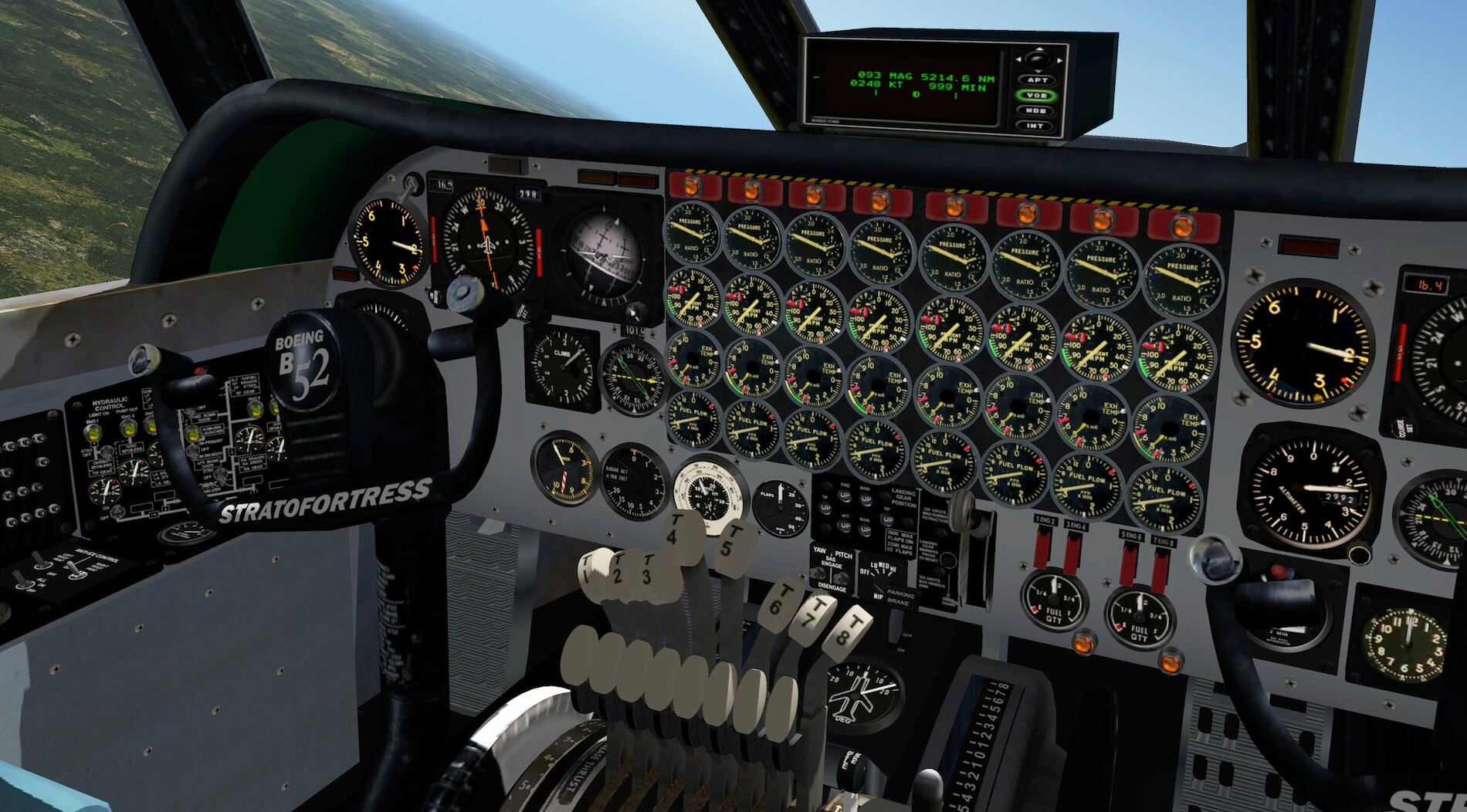 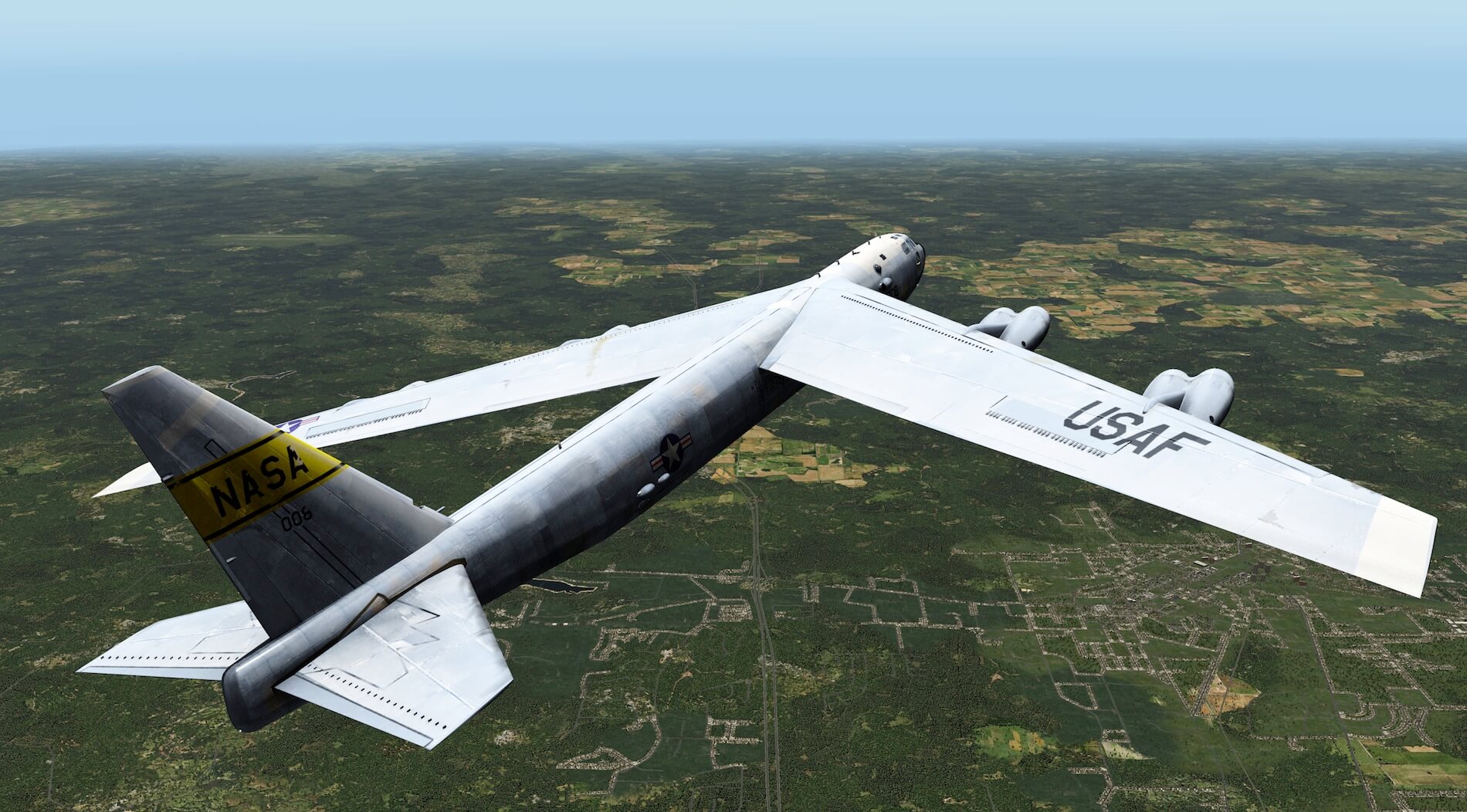 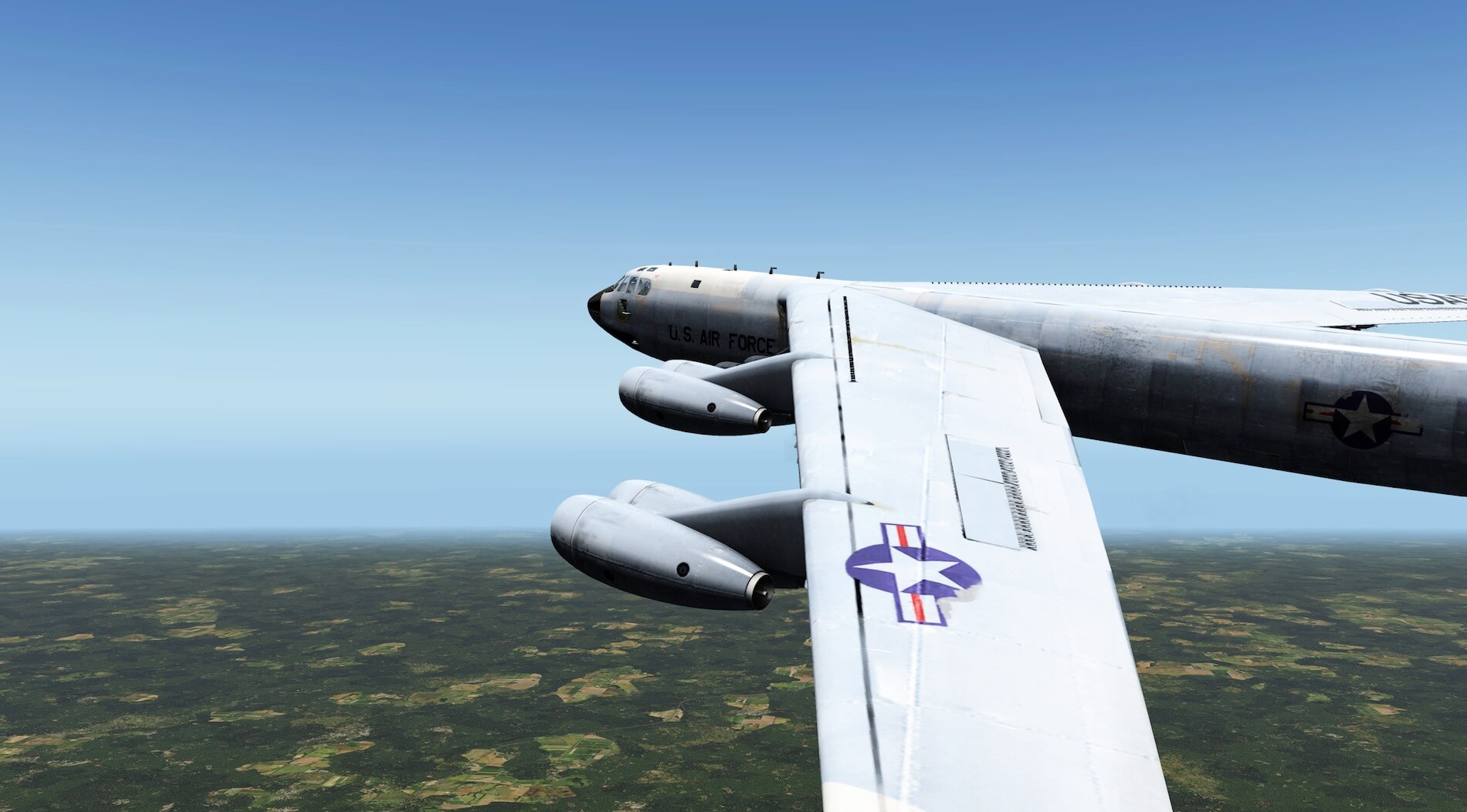 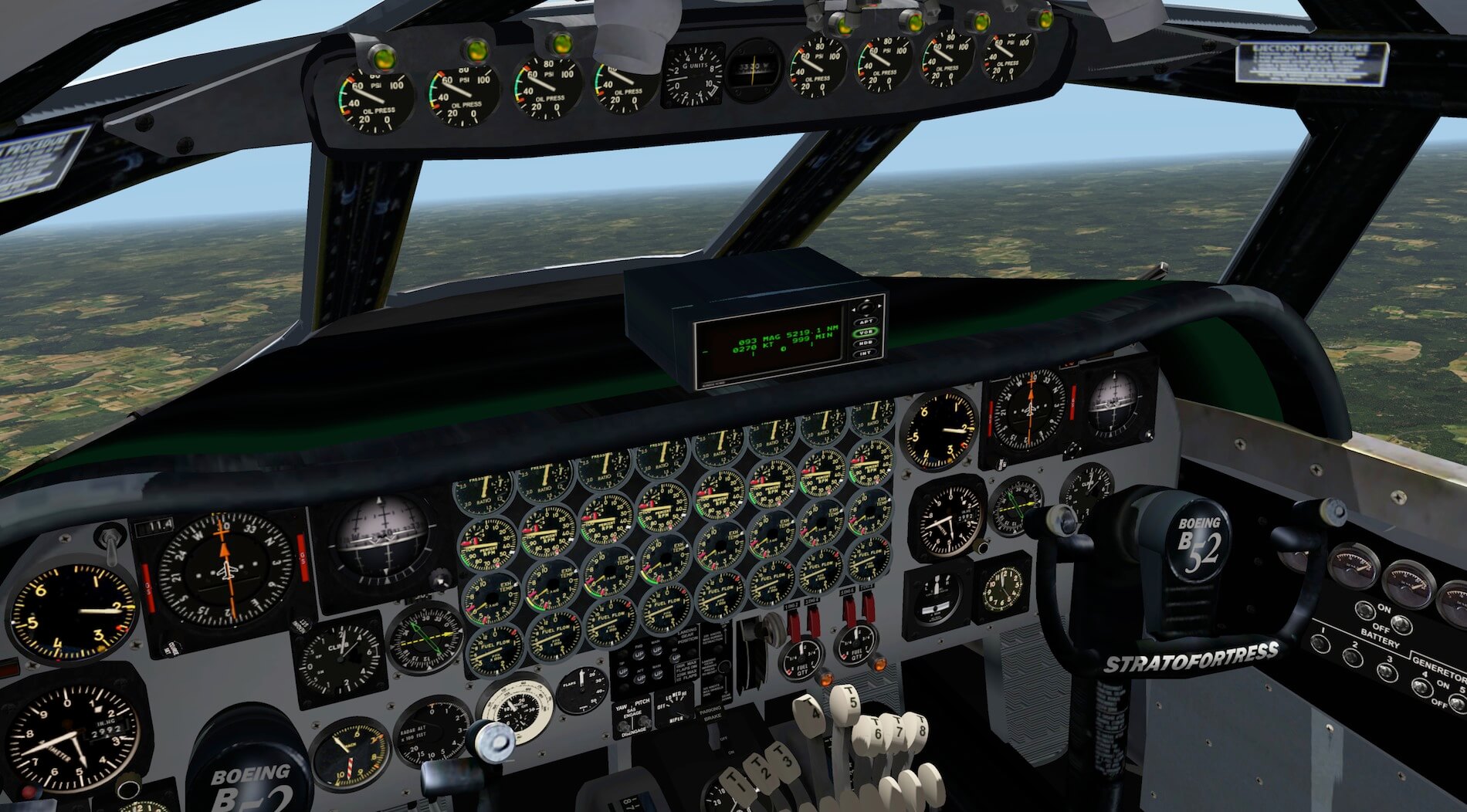 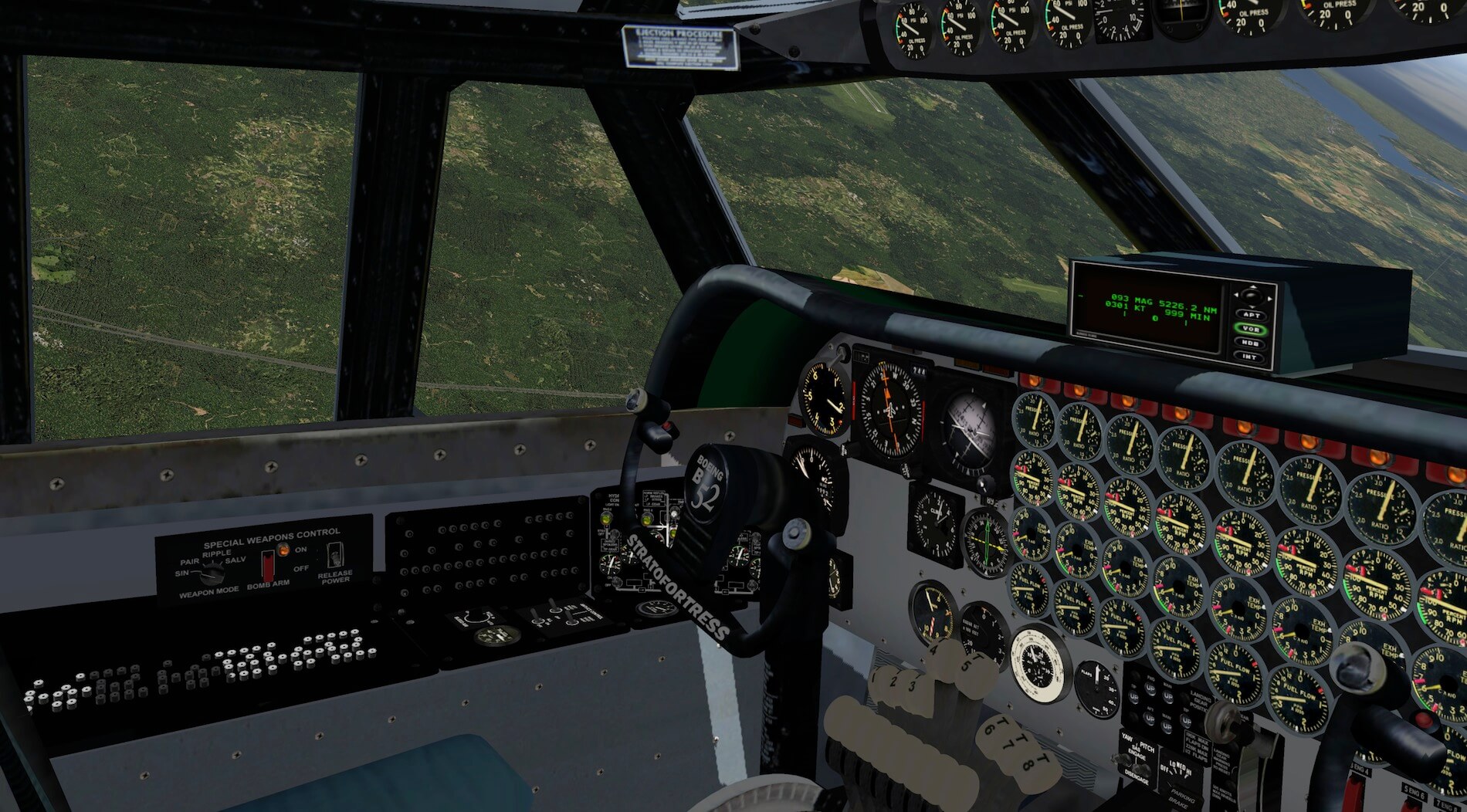 I decided to land on runway 12, Eglin AFB, which means no ILS available. With FLAPS FULL extended and GEAR DOWN, I was impressed with how this B-52 can be flown by hand. You need to take your time, be relaxed and without many problems, it’s possible to land it safely. In other words, the B-52 did a good job, as well as “depas57” 3D cockpit. 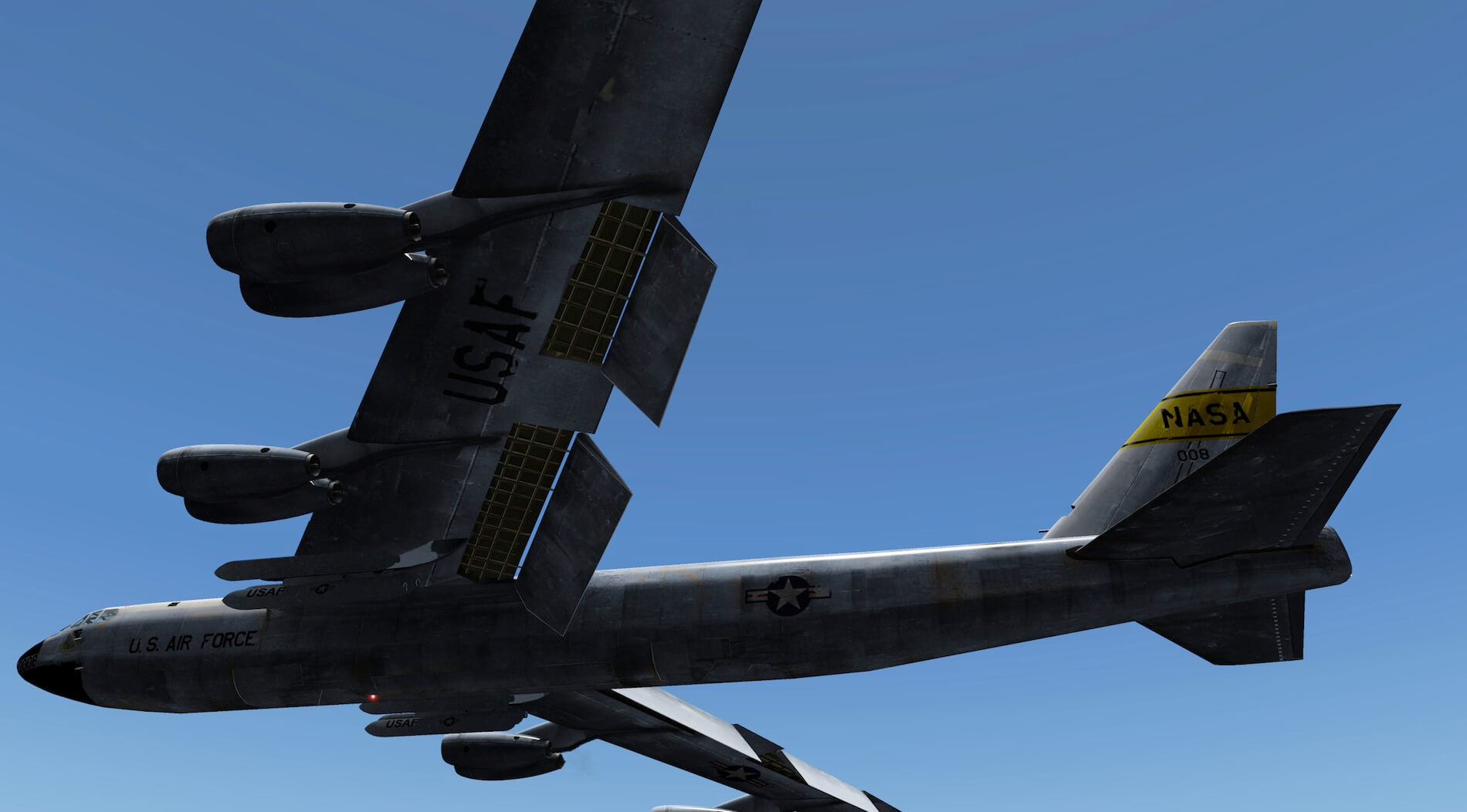 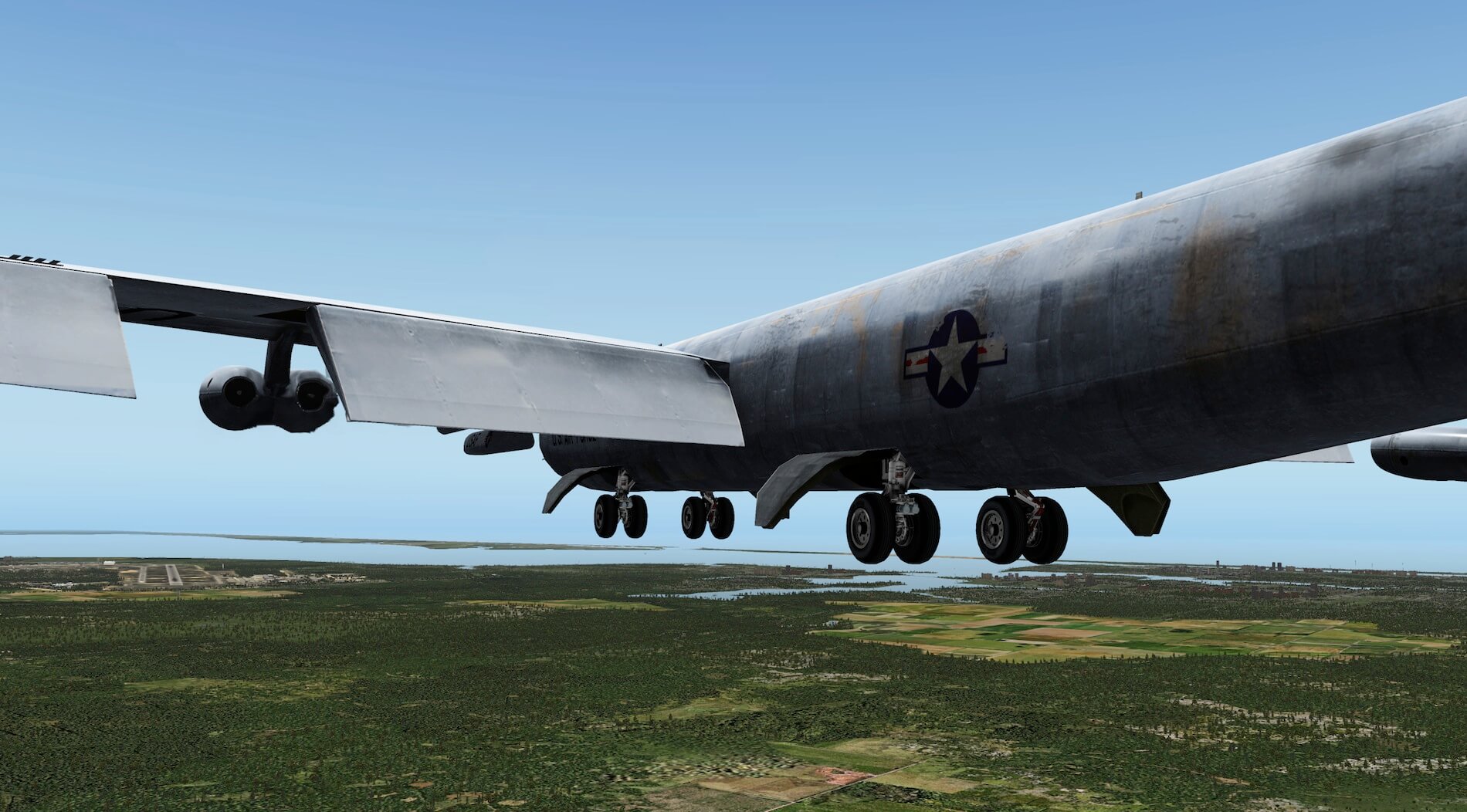 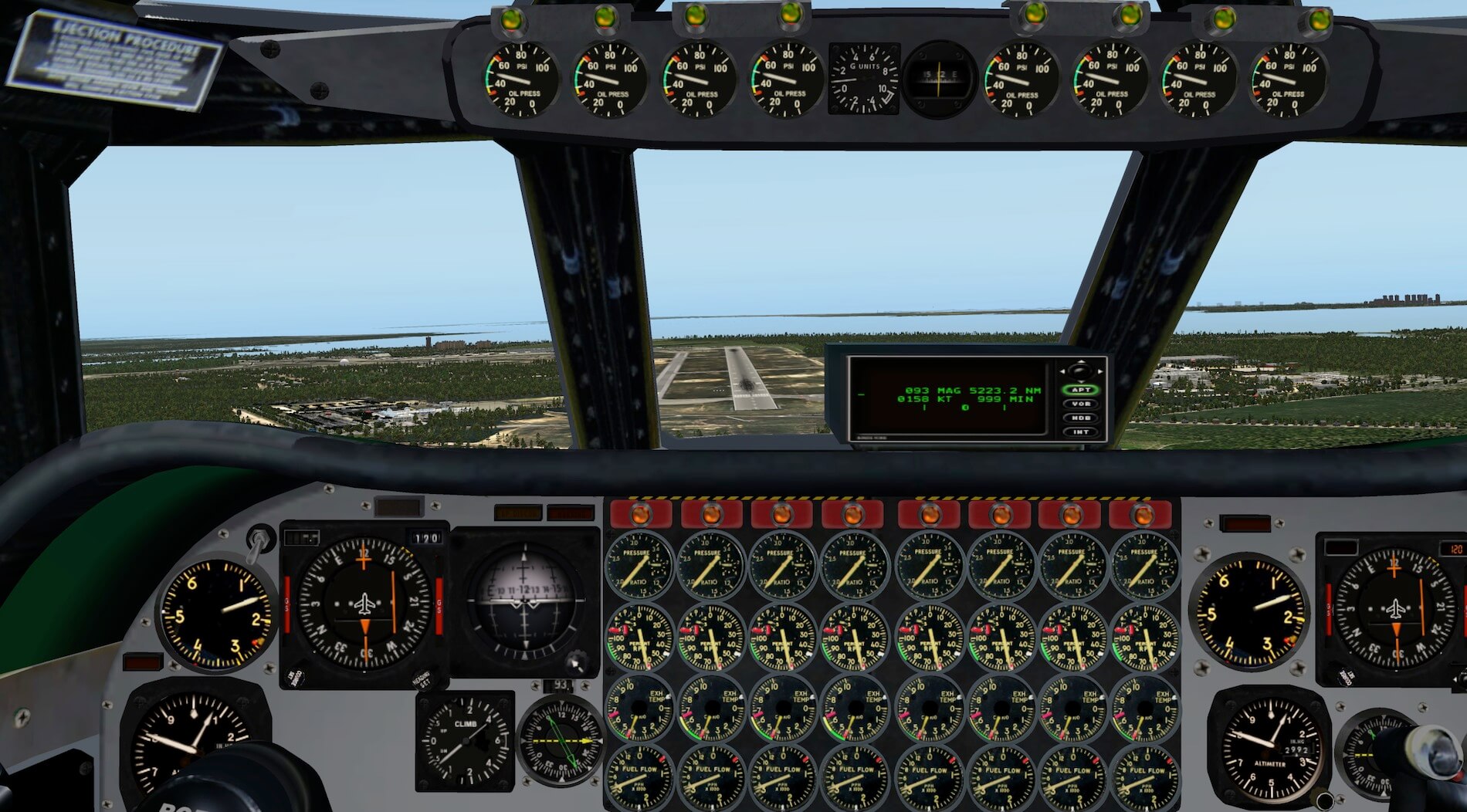 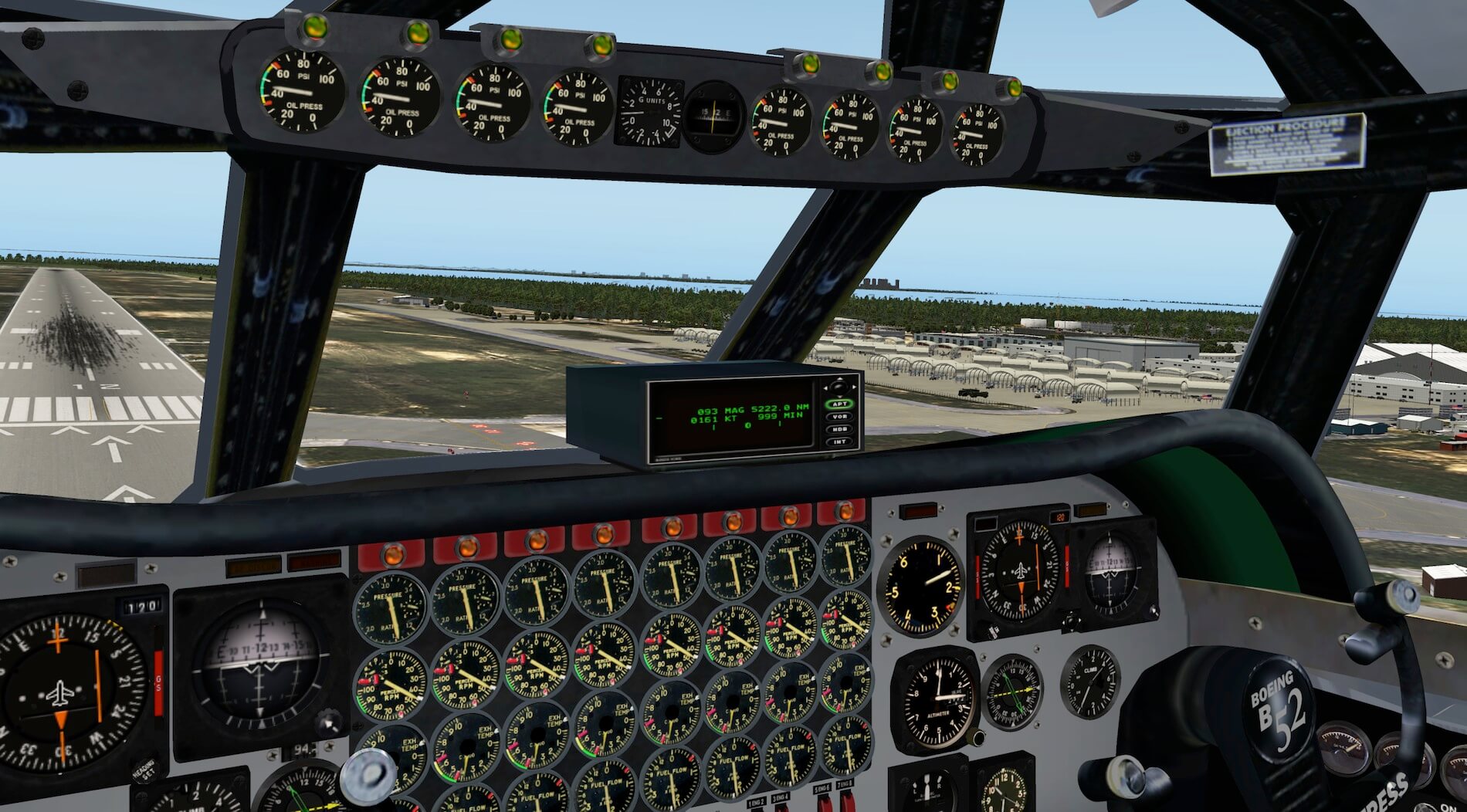 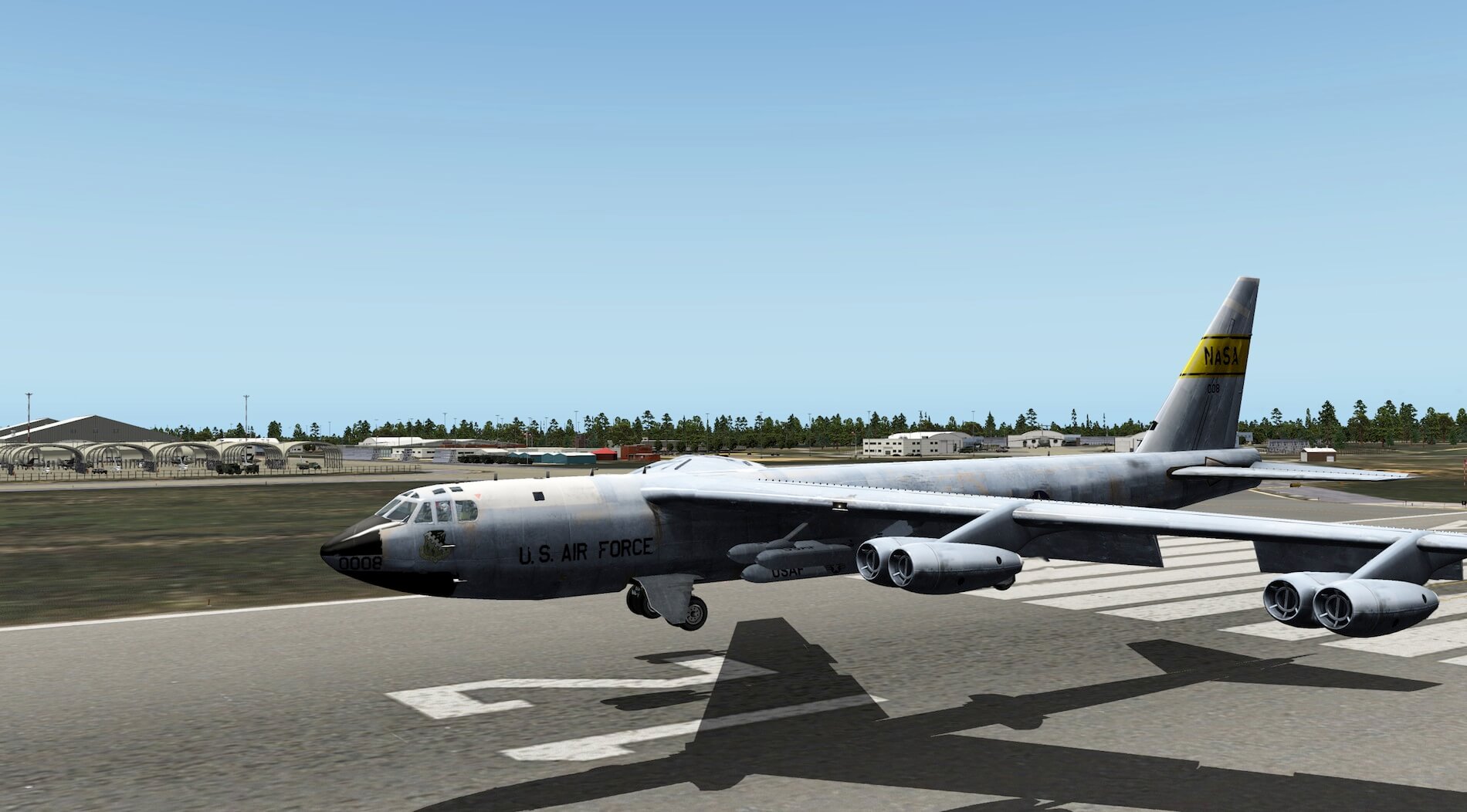 Although we’re dealing with a default XP10 aircraft, tested with X-Plane 10.51, the added 3D cockpit gives the B-52 new wings! Perhaps, “depas 57” can make some refinements when it comes to the blurry text issues, a black instrument panel instead of the gray one and some additional photo-real material. But I was happy that I decided to check his modified B-52 Stratofortress with 3D cockpit.

Nice job!
So if you like to fly bombers such as this B-52, then I suggest you take a look at the dedicated X-Plane.Org web page.