I think many flight simmers, including me, aren’t familiar with the old fashioned Stampe SV biplane aircraft. With that in mind, I think it’s time to check what kind of aircraft this is. Let’s check what we can find on Wikipedia.

Stampe et Vertongen was a Belgian aircraft manufacturer formed in 1922 and based at Antwerp, Belgium. The company specialised in design and construction of primary trainers/tourers and advanced trainers. One of the products, the Stampe SV.4, has become well known as just Stampe.

Established in 1922 with Alfred Renard as its Chief Designer, the company designed a series of trainer/tourer aircraft in the 1920s and 1930s, all prefixed RSV (for Renard, Stampe and Vertongen).

In the early 1930s Alfred Renard left to join a company he had formed with his brother Georges Renard Société Anonyme d’Avions et de Moteurs Renard. The RSV company designation prefix then changed to SV. Although only 35 were produced before the start of the war, a total of 940 were built, mainly under license by other companies. 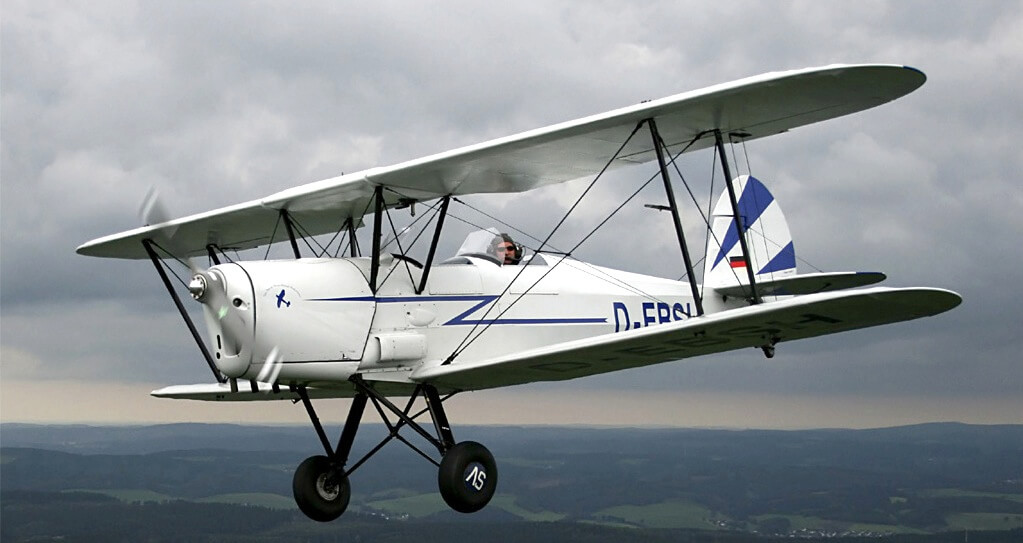 The company was renamed Stampe et Renard when Stampe merged with the Renard company. The first model was the SV.4A, an advanced aerobatic trainer, followed by the SV.4B, with redesigned wings and the 130 hp/97 kW de Havilland Gipsy Major engine.
A licensed SV.4C version was built in France by SNCAN (Société Nationale de Constructions Aéronautiques du Nord) and in Algeria by Atelier Industriel de l’Aéronautique d’Alger.

The two firms completed a combined total of 940 aircraft. The postwar SV.4Cs were widely used by French military units as a primary trainer. Many also served with aero clubs in France, numbers of which were later sold second-hand to the United Kingdom and other countries. (Courtesy of WikipediA)

What do you get?

Downloading the Stampe SV4c is possible by accessing the freeware products from XPFR (Association of French-Speaking Creators). This Stampe SV4c review deals with the X-Plane 10 package which can be downloaded by using this link. By the way; I didn’t test this aircraft with X-Plane 11, but in case you manage to get it working, please let a comment so we all know.

Once downloaded (STAMPE-SV4C.v.13-86_(33).zip) and unzipped to folder “Stampe_SV4C_v10”, you copy and paste the complete Stampe folder to your General Aviation folder. If you prefer another folder such as “Vintage Aviation”, as an example, you can make that yourself. Basically, you’re ready to start flying with the Stampe SV4c. But first, there’s something I’d like to highlight. In the Stampe folder you’ll find two Acrobat files.

One in English and one in French. Since my French isn’t good enough, I’ll stick with the English readme document. The document offers some historical information, a cockpit overview and where to get additional liveries. The package comes with the following liveries as standard: F-BGGP (default livery), Armee, F-BCUV, F-BMMA, F-GKEB, G-AYGE, G-AYJB, Marine, Napulevola and UTA.

Since the cockpit isn’t complicated, I can check it out during my test flight, but I need to do a walk-around check before leaving mother Earth. I found out that the biplane is, for a freeware aircraft, very well modeled and that it comes with a lot of tiny details. I found that it looks very nice from a distance and when checking the fuselage, wings and tail closely, it’s still good looking. My walk-round check won’t take long, but it’s worth highlighting a few items. The propeller is, as expected, wooden and this means that either the chosen material reflects a wood structure or the propeller is covered with photo-real material Whatever was used, it looks realistic.

The nose cowling section with exhaust pipes is characteristic for that type of mounted engine. Underneath, the two main wheels have all the associated structure and the tires looks nice and realistic. There seem to be brake units, but I’m not 100 percent sure if the Stampe is really fitted with brakes. If they are, then I don’t see any brake lines! 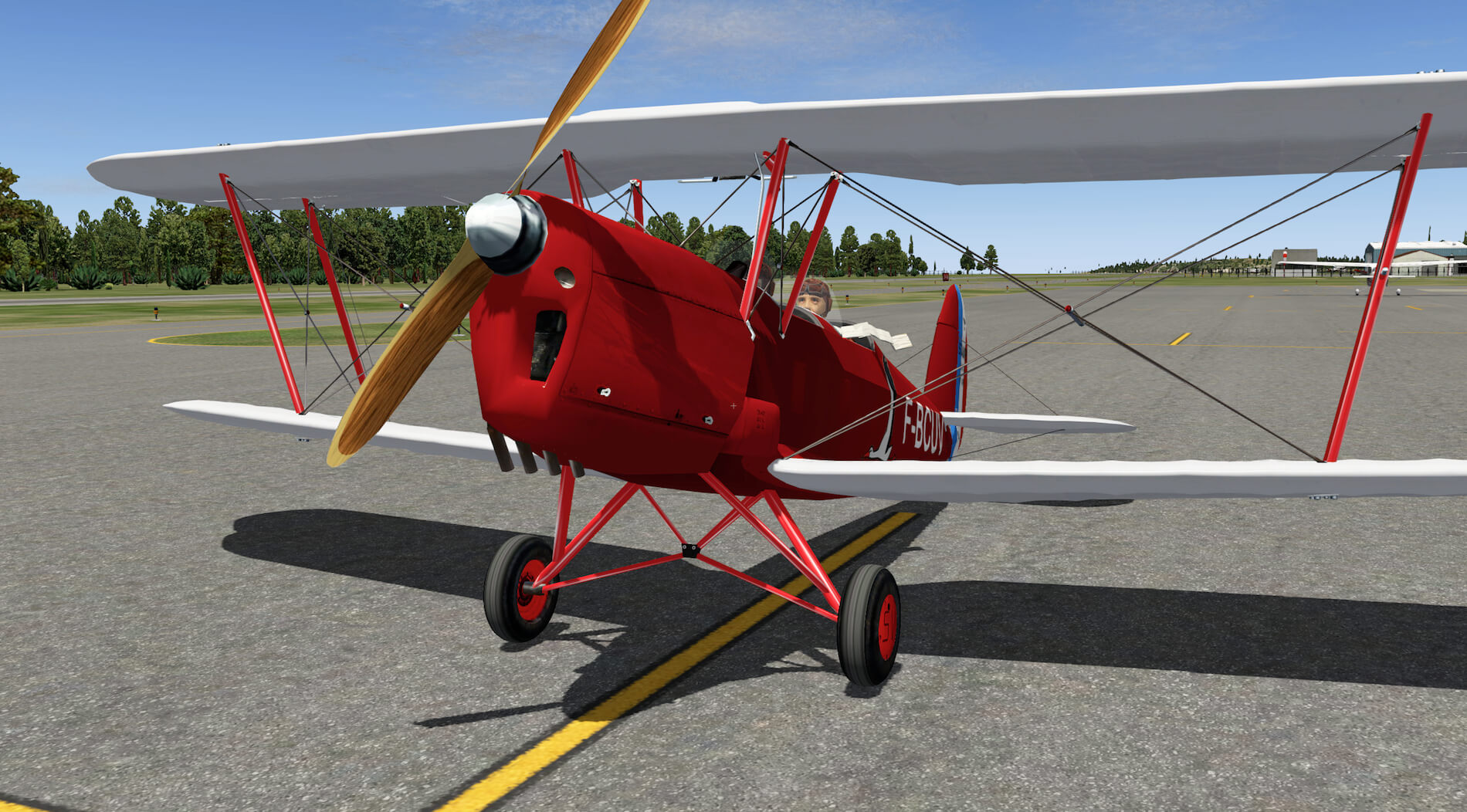 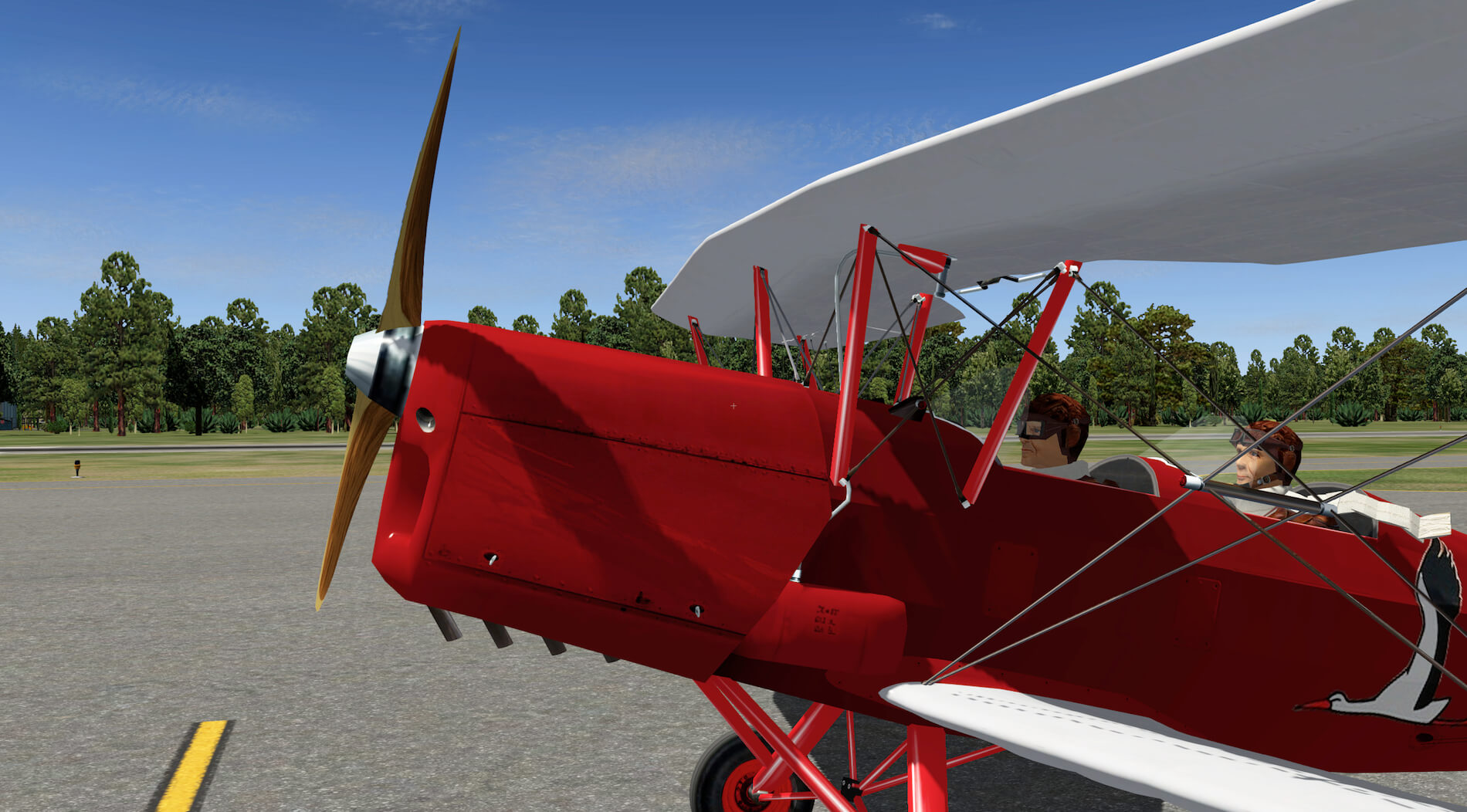 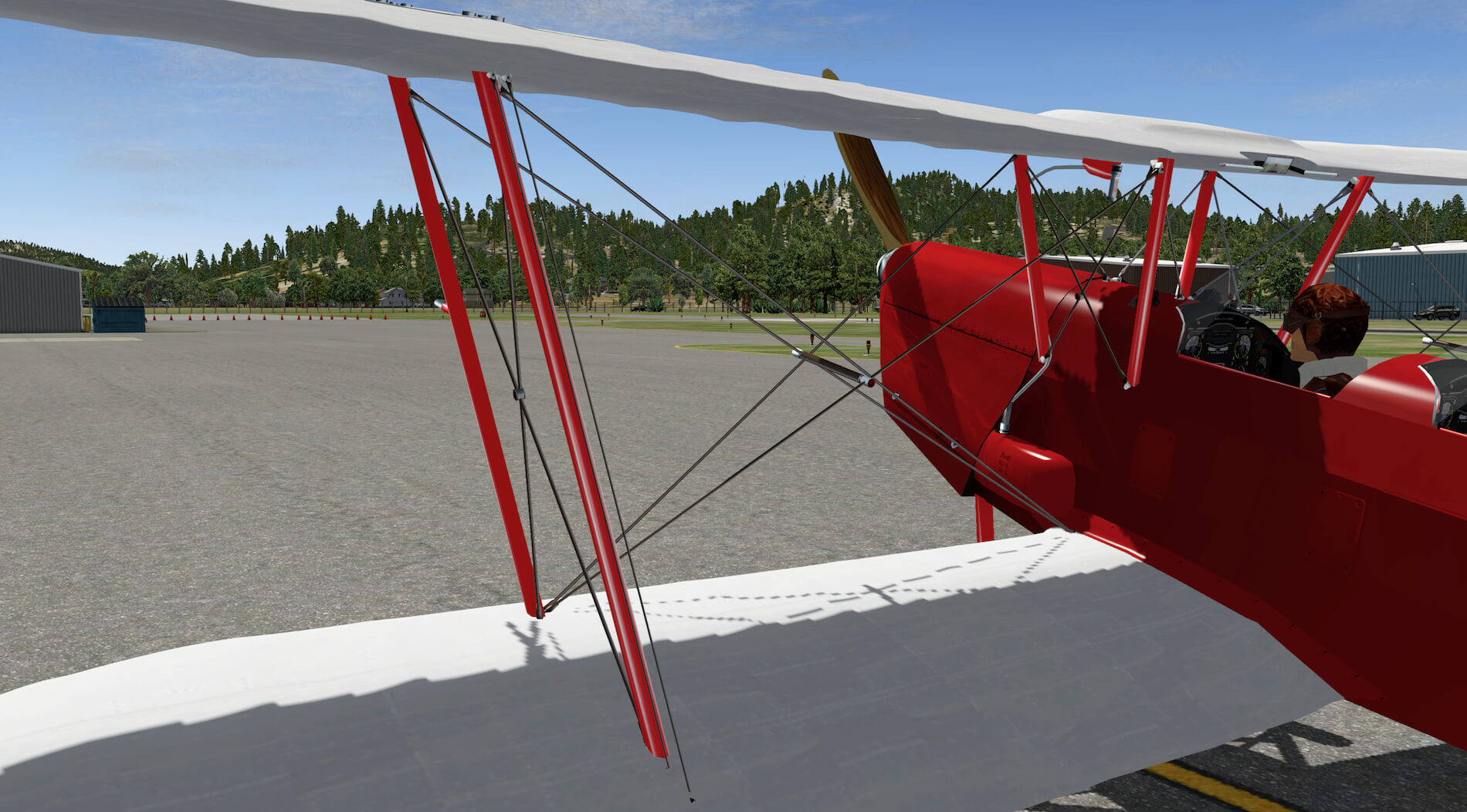 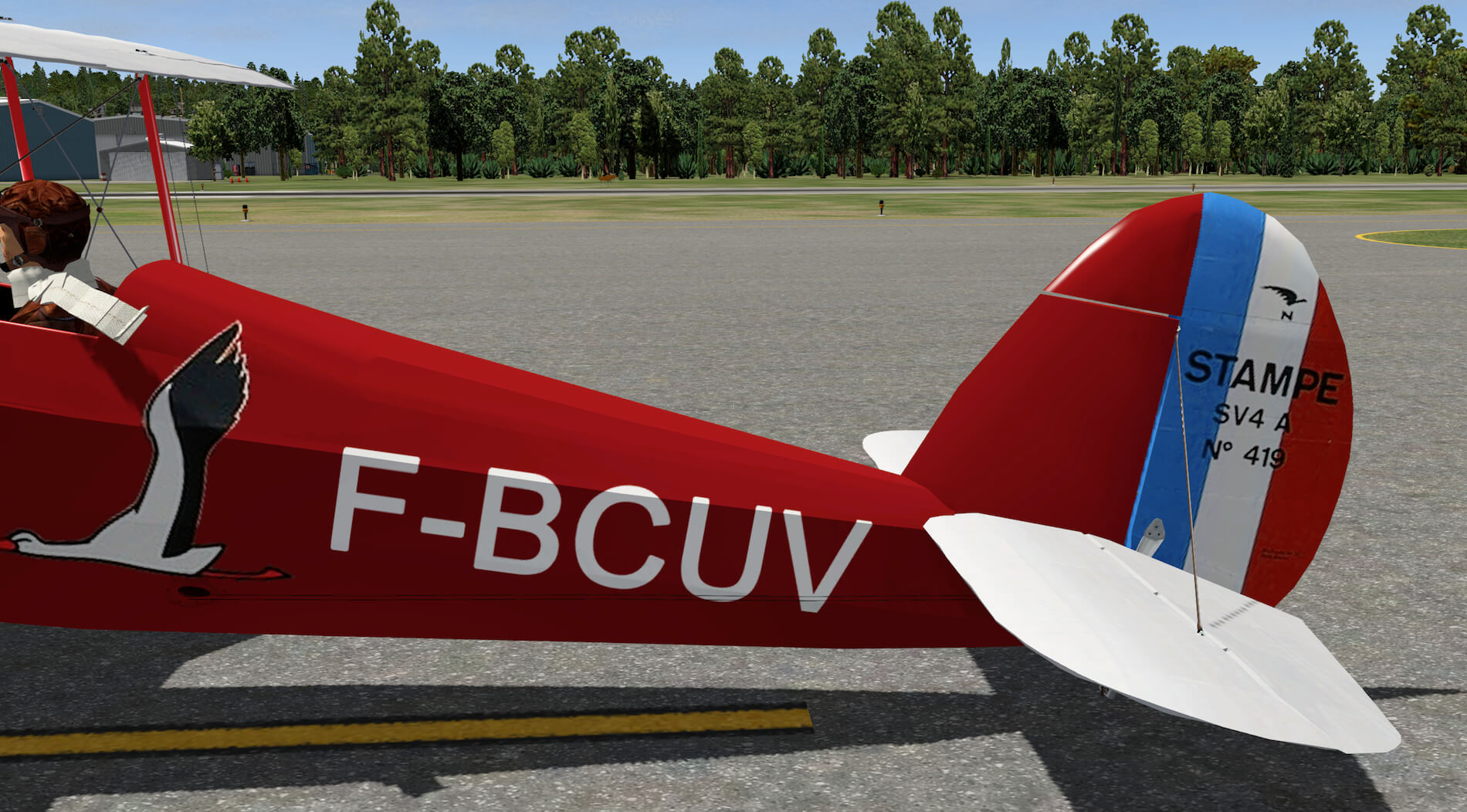 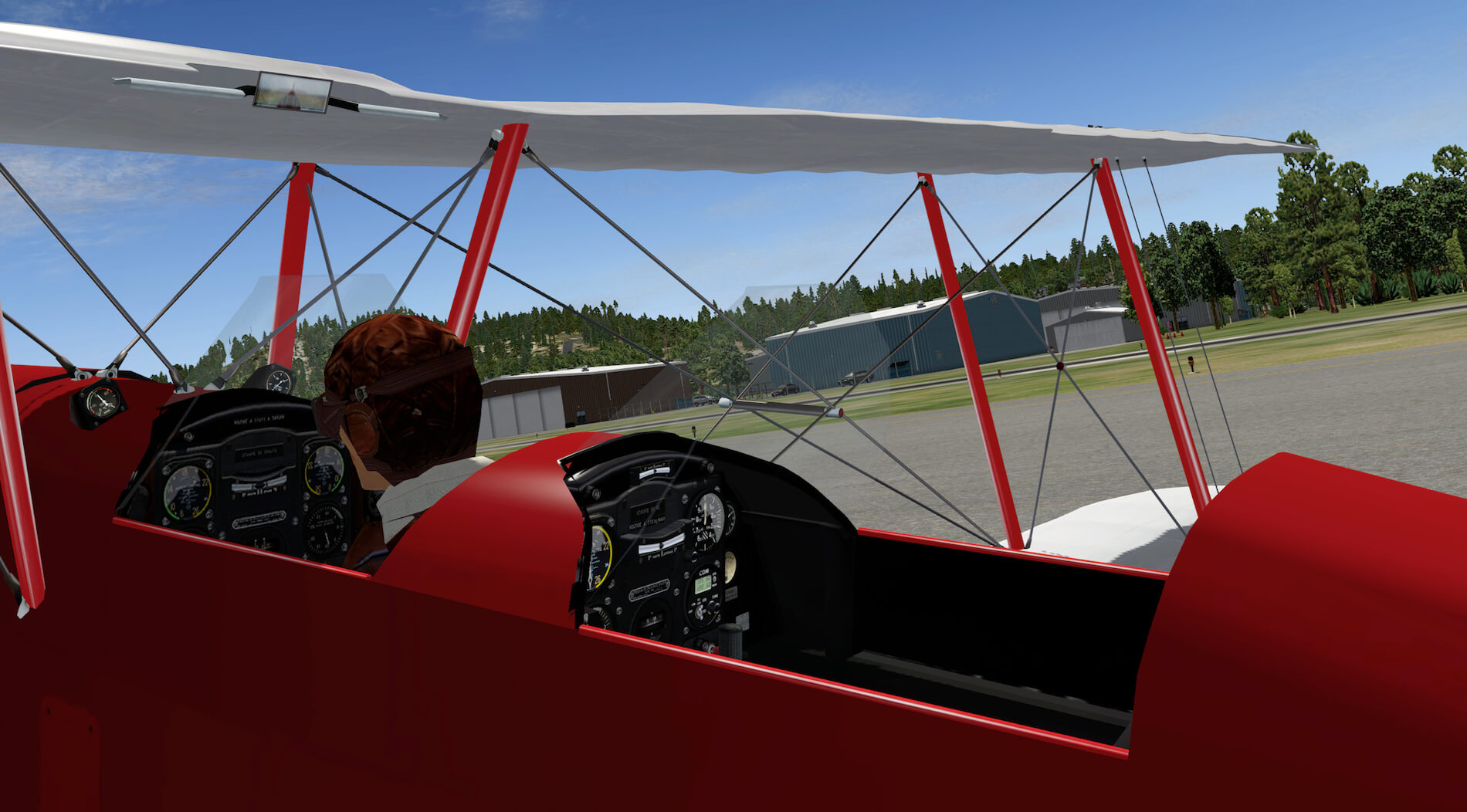 The two wings are held together, besides the fuselage construction, with cables and rods. Even on this tiny model, you can see the turnbuckles and wing connection brackets. Not all in full detail, but still, realistic enough. The Stampe is a two-seat aircraft and if you’re sitting at the second position, your forward view is a little obstructed on the ground. And the view is already obstructed because of the tail wheel.

Walking from the wing to the tail I, see a well modelled tail wheel assembly and nicely modelled horizontal and vertical stabilizer. What’s clearly noticeable at the wing and tail structure is the ribs and stringers construction are covered with cotton. By the way, the horizontal and vertical stabilizers are supporting each other with a stainless-steel cable on each side. Finally, the Stampe has fuselage, wing and tail NML files for a 3D effect.

Overall, a nicely modelled aircraft. But, how will it fly?

Time to climb on-board. As I’ve indicated, my place is the second position. The first thing I notice is the easy looking and well modeled 3D cockpit. In case you don’t know how to start the engine, then check the instructions in the readme document. The wooden panel is filled with some basic instruments and even a COM instrument. So, we’ll only be flying VFR flights with this aircraft. I’m surprised that the modeled Stampe doesn’t have navigation lights and, in fact, any lights at all.

Anyway, the instruments are well modeled and sharp for a freeware add-on aircraft and that’s true not only from normal viewing locations, but also if you zoom in to the panel. I’ve got the idea that all, or at least most of the instruments, are made by the developer. In other words, these instruments aren’t stock instruments. In the middle of the instrument panel, you’ll find some old-fashioned identification plates and if you’ve selected a painting from Leen de Jager, then that’s engraved on a stainless-steel plate. Since the Stampe doesn’t have a closed cockpit, the pilots have a glass or Plexiglas protection in front of them.

I think it’s time to make my test flight.

After I’ve started the Stampe, I taxi from parking spot runway 16 KORS, Orcas Island. Taxiing a tail dragger is never easy since you don’t see so much in front of you and particularly in this Stampe, since you’re sitting at the second flight position. Still it isn’t impossible to taxi to runway 16. Just look along the side of the aircraft and try to follow the taxi line. The Stampe isn’t equipped with flaps, so there’s no need to think about that for your take-off.

Since it’s a biplane aircraft, if you haven’t thought about this, each wing has an aileron so, you’ll have an upper and lower aileron on each wing side. There’s only one thing you have to keep in mind during the take-off. As your speed is increasing, there’s the moment where the tail lifts and the nose of the fuselage moves down. The moment this happens, you need pitch control to keep the Stampe level on the runway, otherwise the engine propeller will hit the ground. 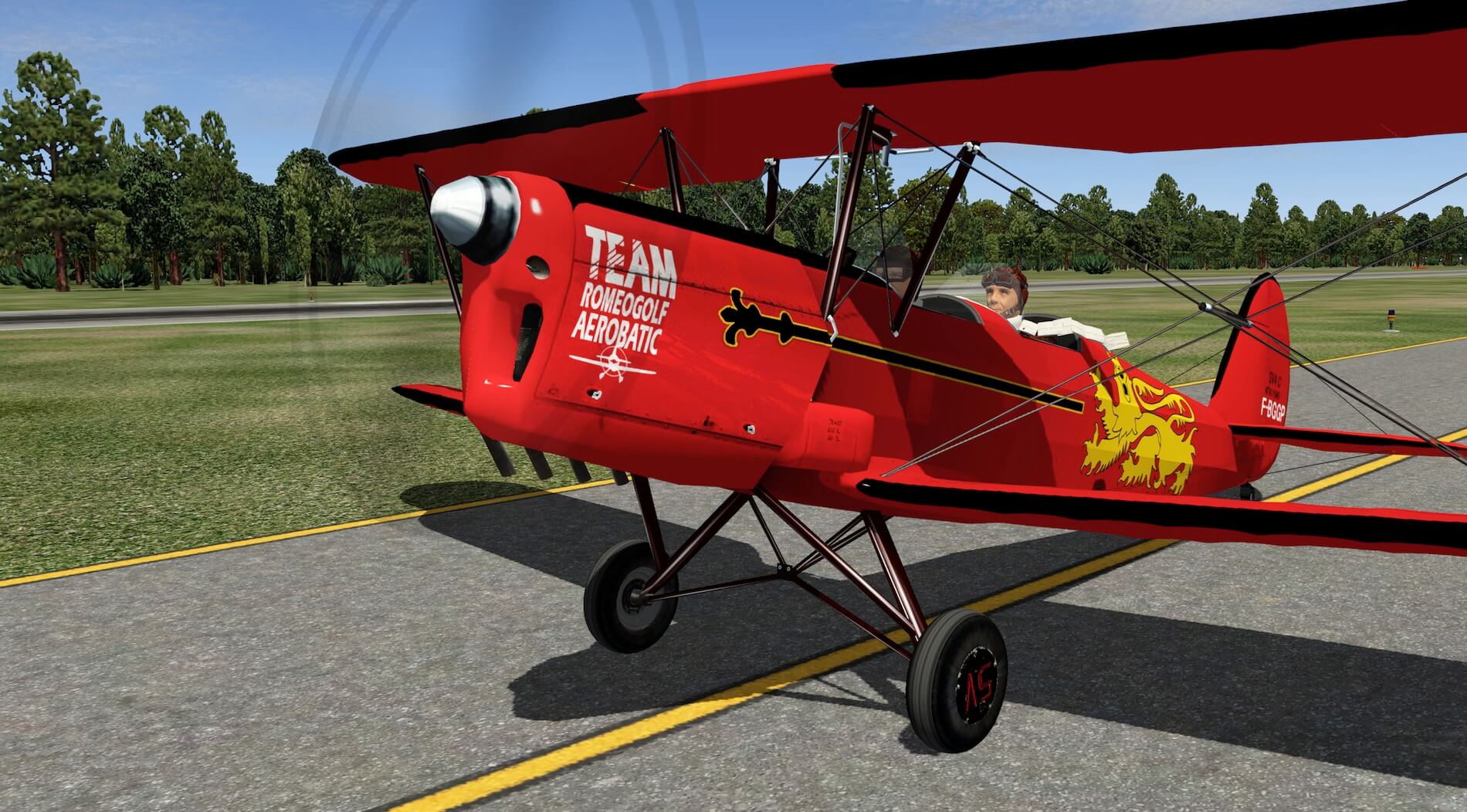 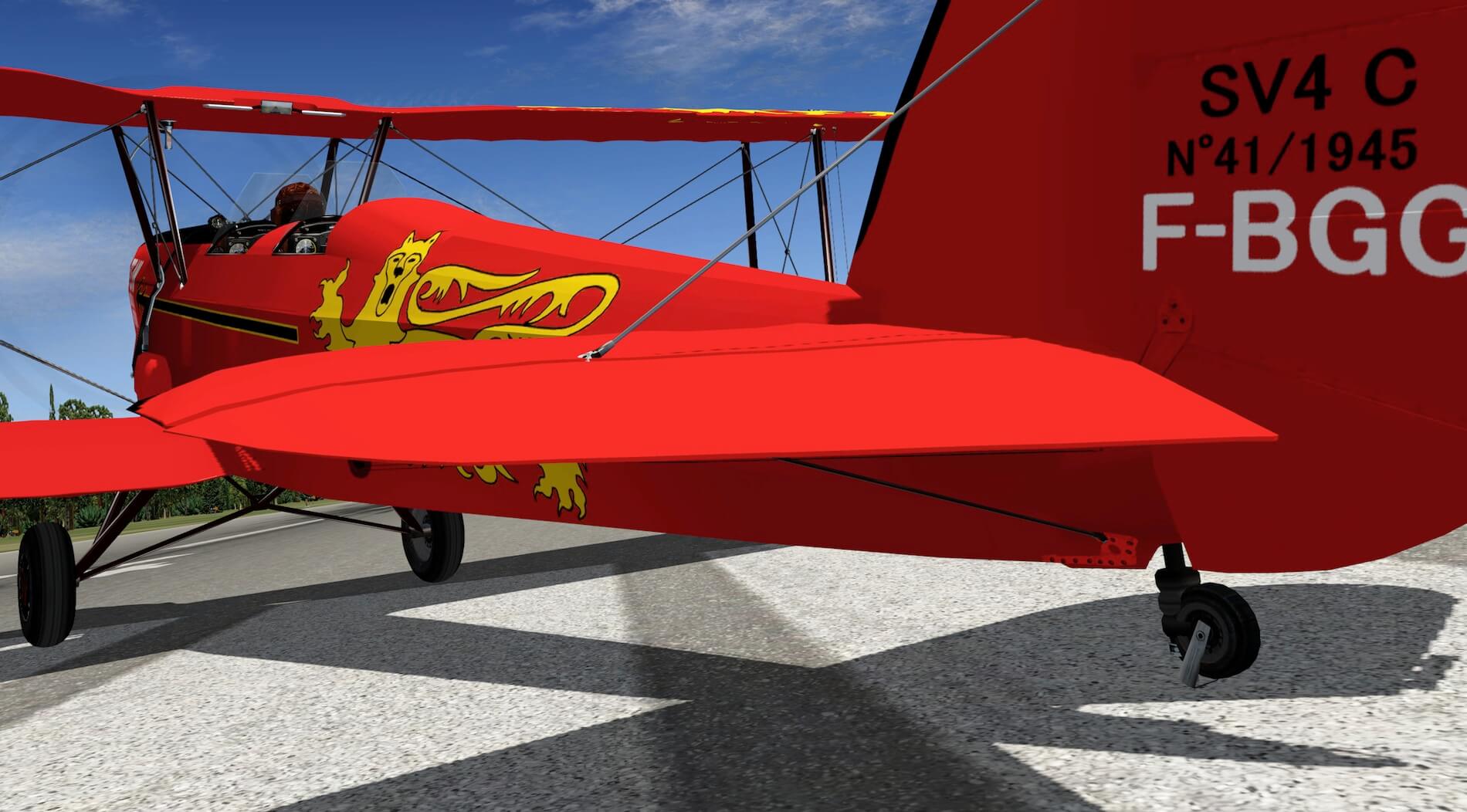 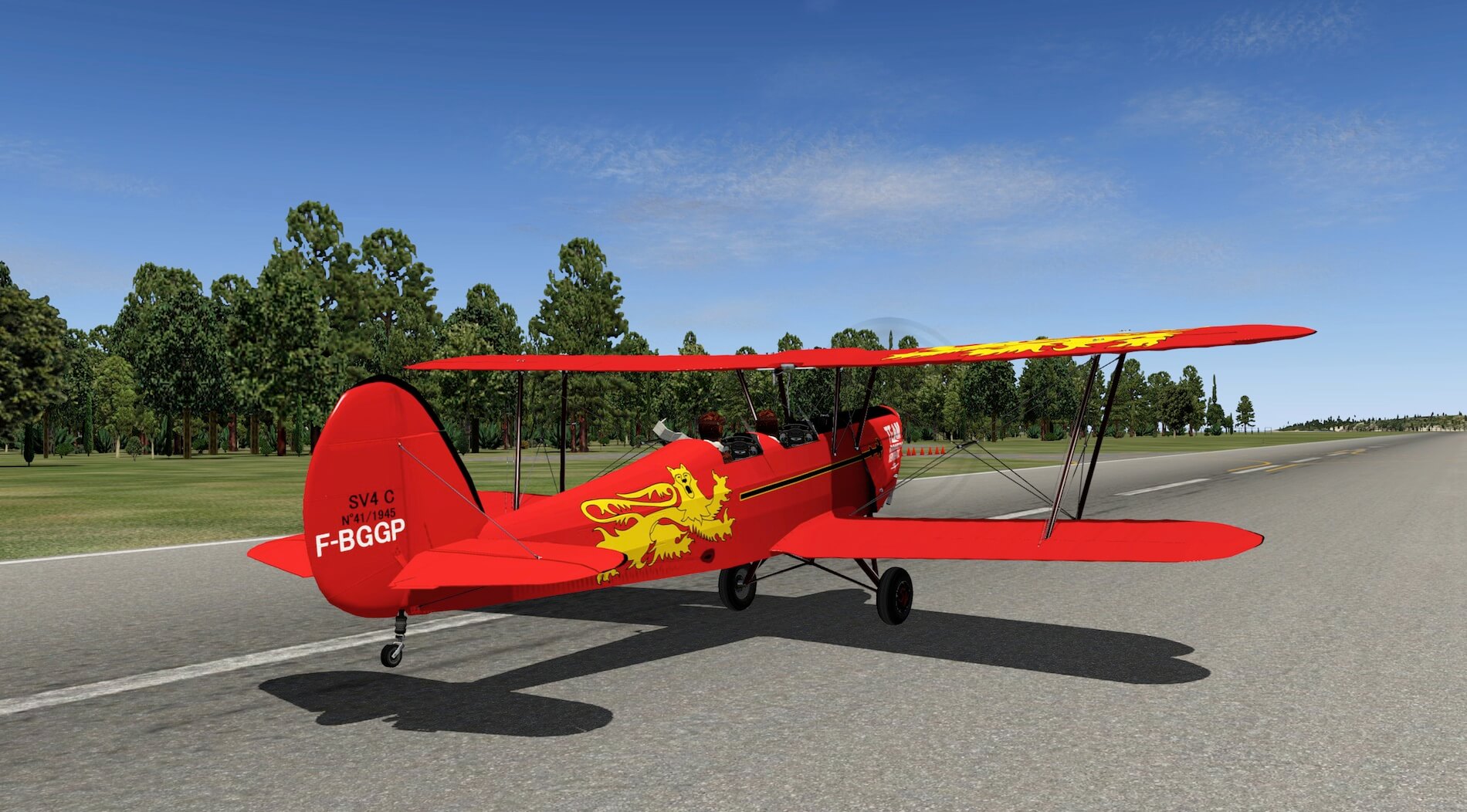 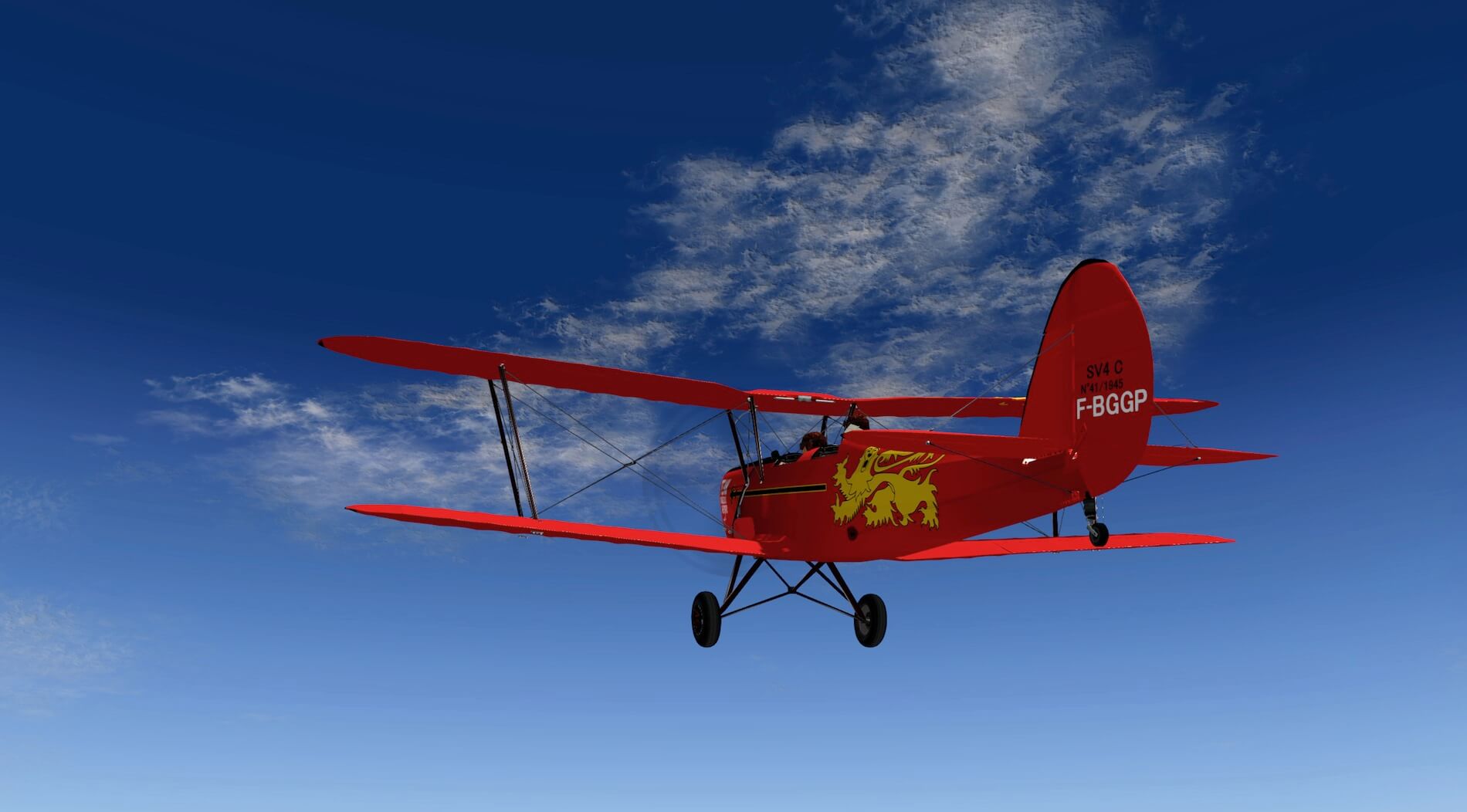 The moment the Stampe lifts off, try to climb out with a steady vertical speed of 500-800 feet/minute. Since you don’t have to retract flaps or the landing gear, you can try to trim the pitch so that the Stampe flies by itself. It turns out that you can trim for pitch and roll, although this isn’t something you can do with the real Stampe. Once you’ve reached your cruising altitude, you can make steep turns, slow flights and even spins. The Stampe behaves OK under each of these unusual flight conditions and there’s no reason that you would lose control of the Stampe.

There’s one thing I forgot. Although not of great importance, above your head at the middle of the top wing construction, you’ll spot a small mirror. This mirror allows you to check the tail of the aircraft and everything that’s behind you on the ground and in flight. A very nice feature, but not unusual since I can remember this feature in my PPL Cessna C152. 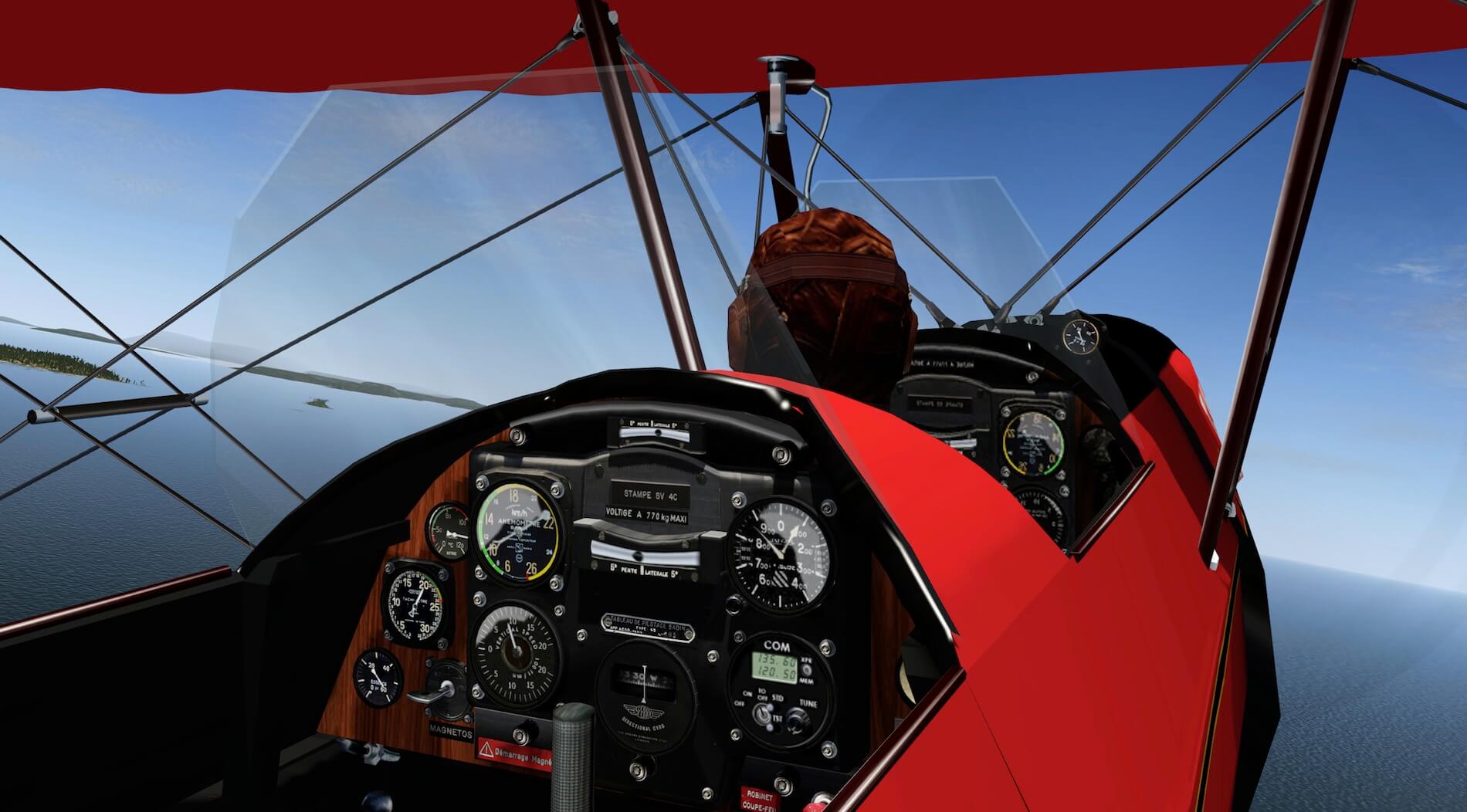 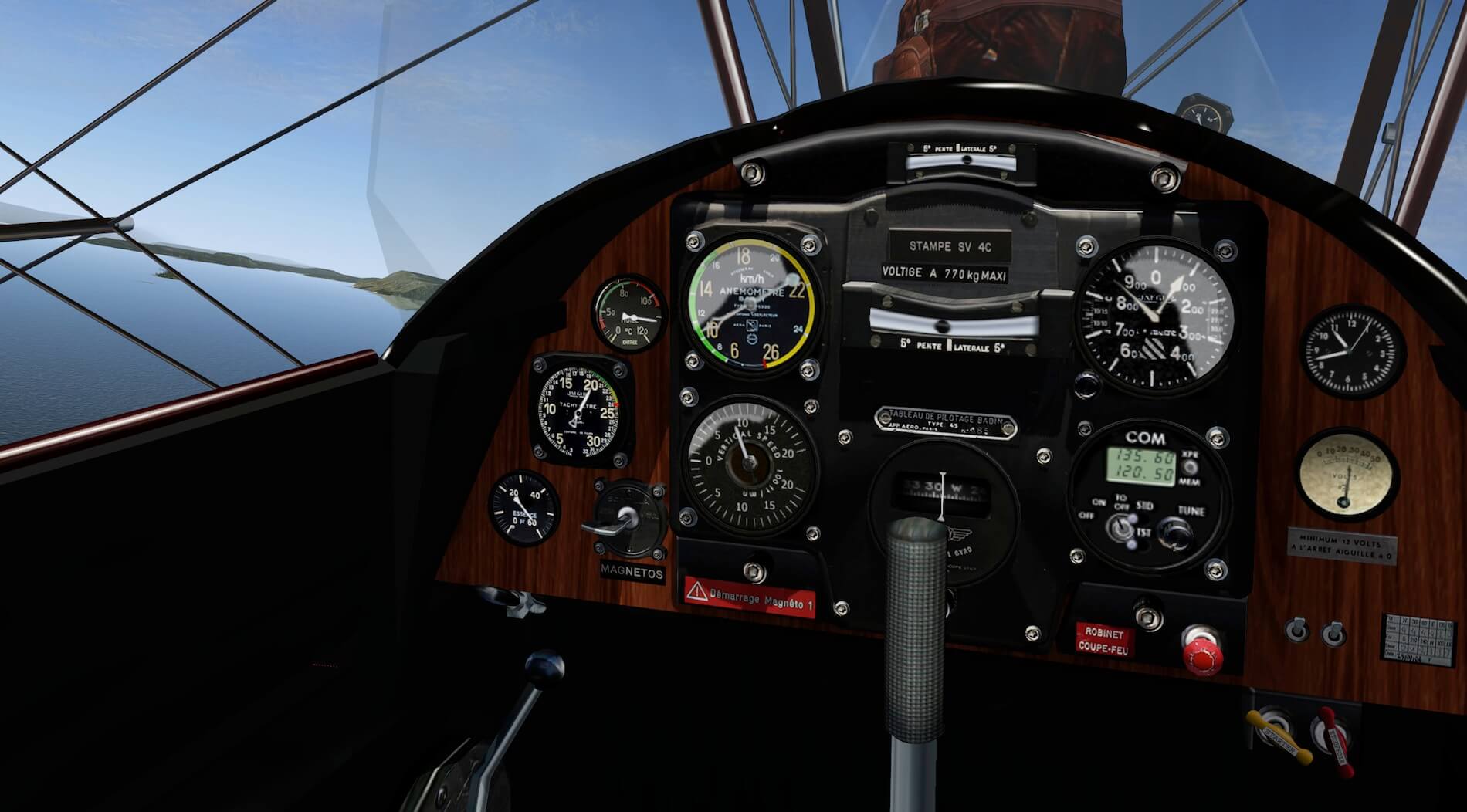 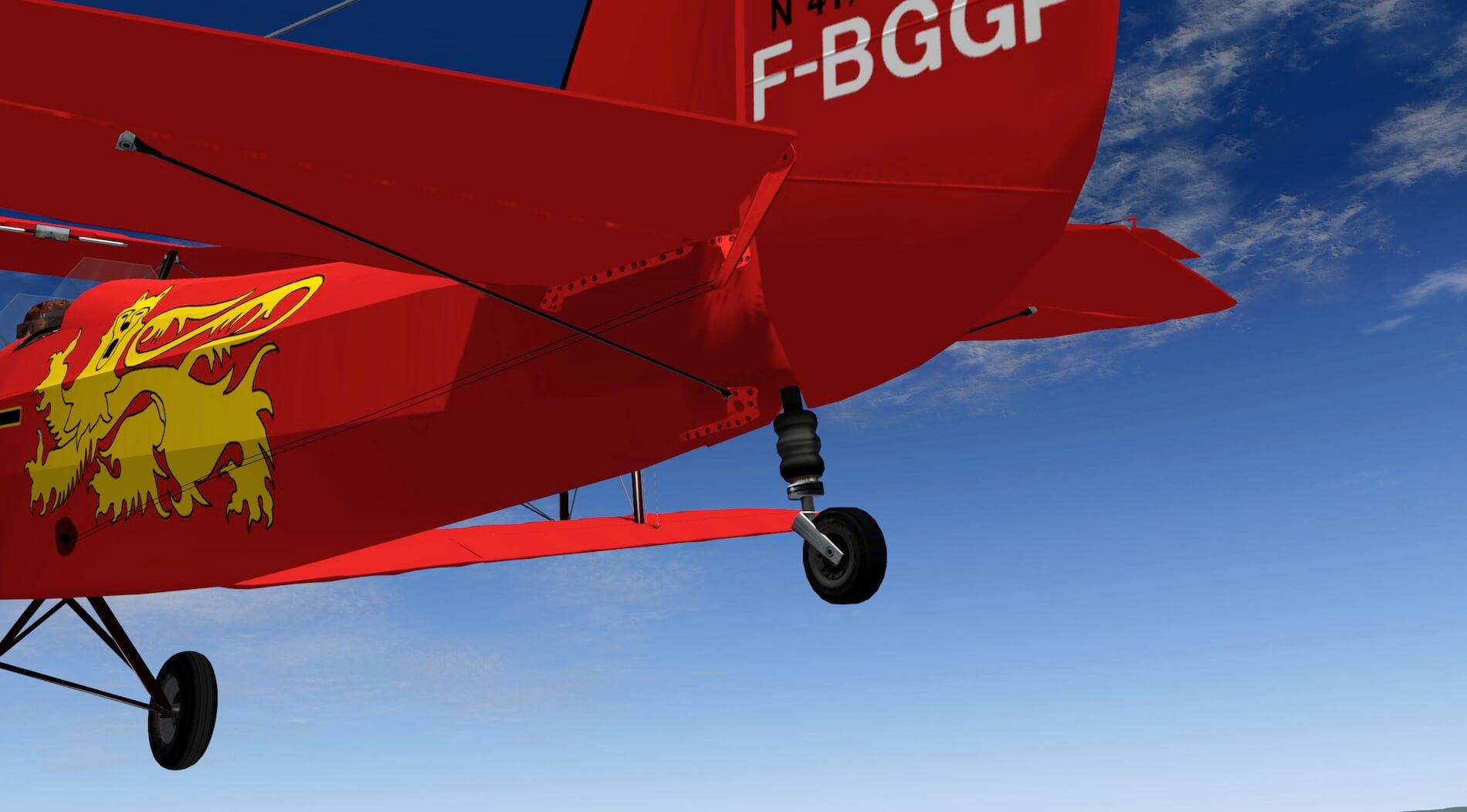 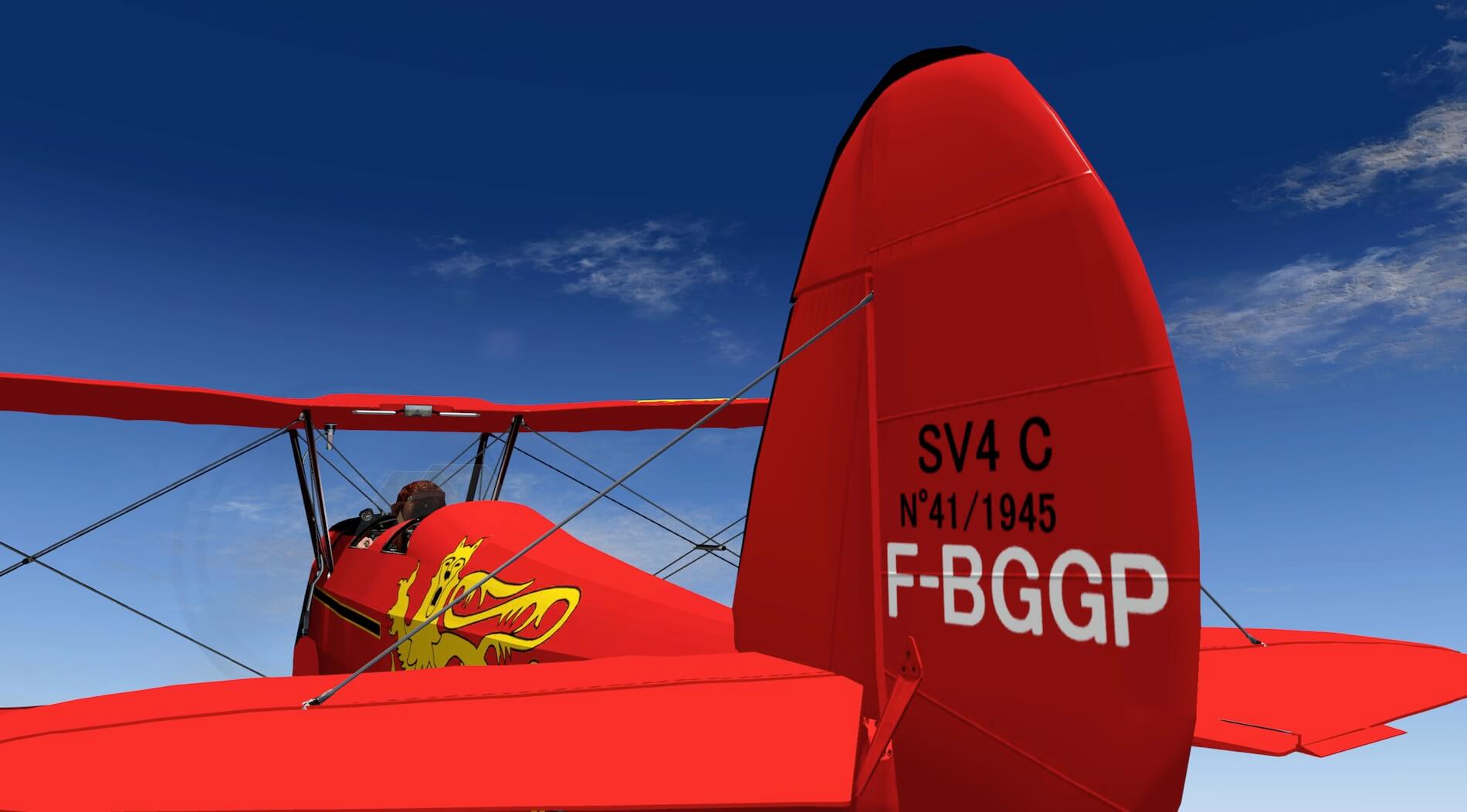 Preparing the Stampe for a visual approach to runway 16 of Friday Harbor Airport (KFHR), is easy. Remember, you don’t have flaps so there’s nothing to worry about there. The only thing you need to monitor is your approach speed. Since it’s an easy going aircraft landing isn’t really a problem. But upon touchdown, you have to keep in mind the following. The Stampe has no nose wheel but a tail wheel. This means you have to flare the Stampe upon landing which will prevent the propeller from hitting the ground. 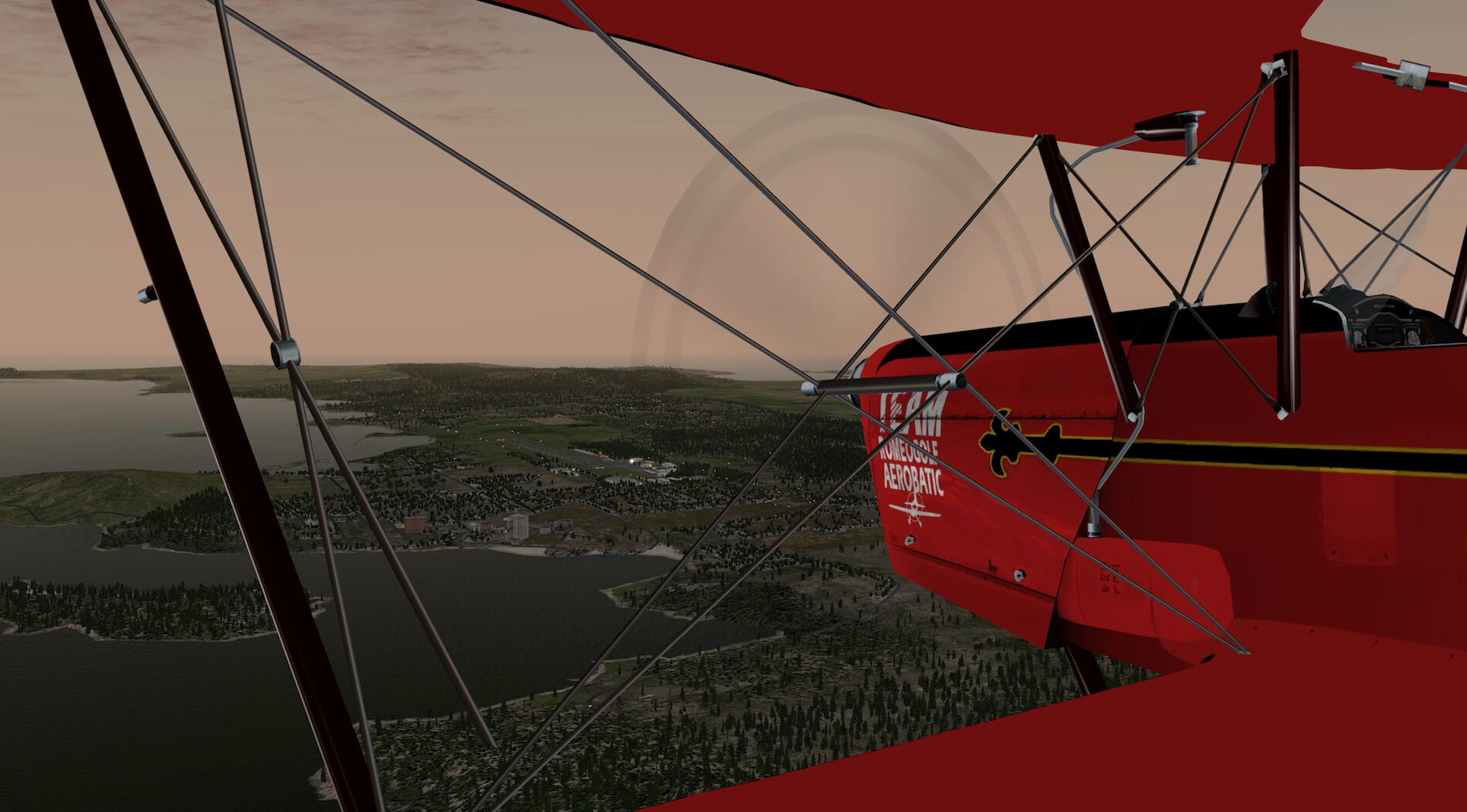 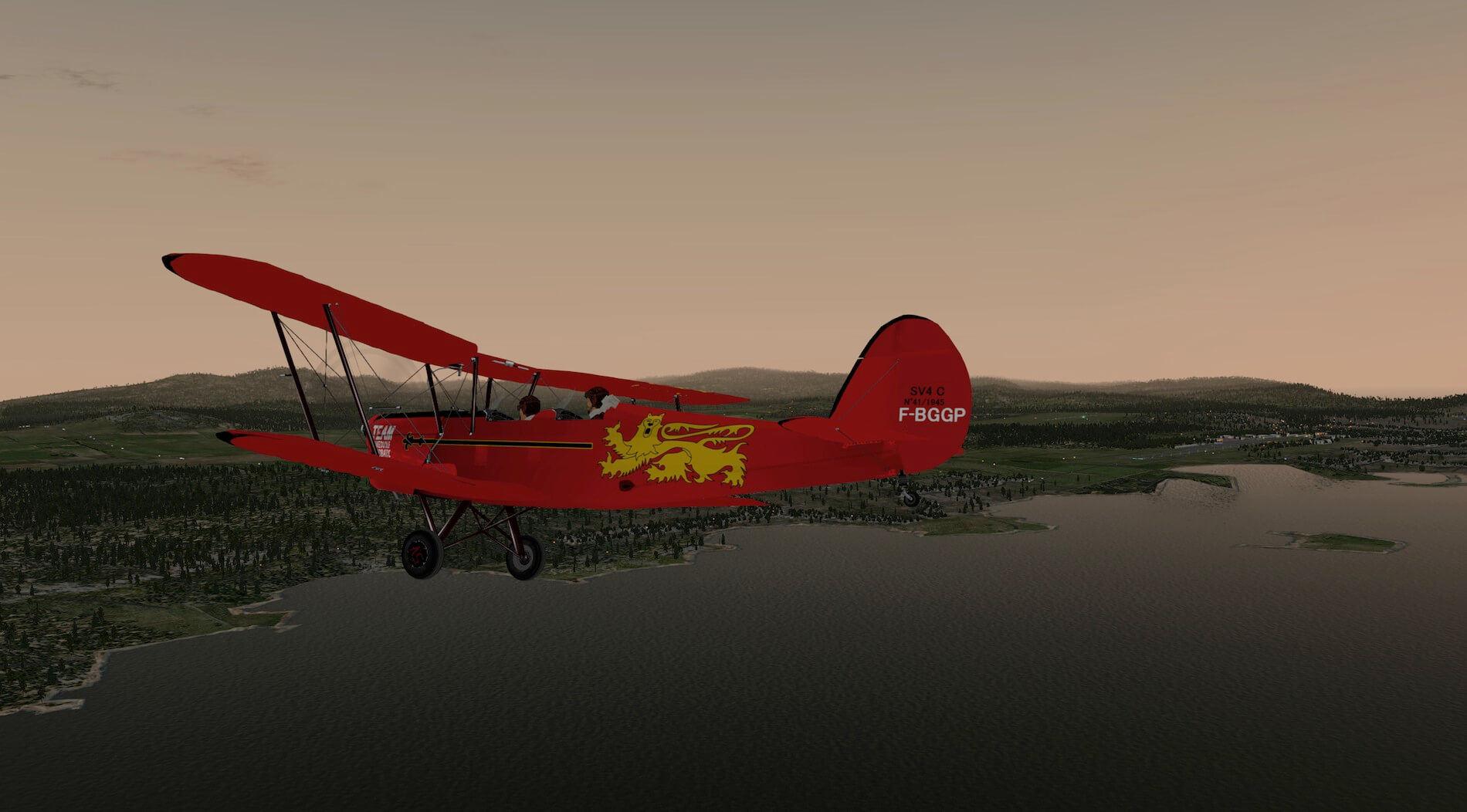 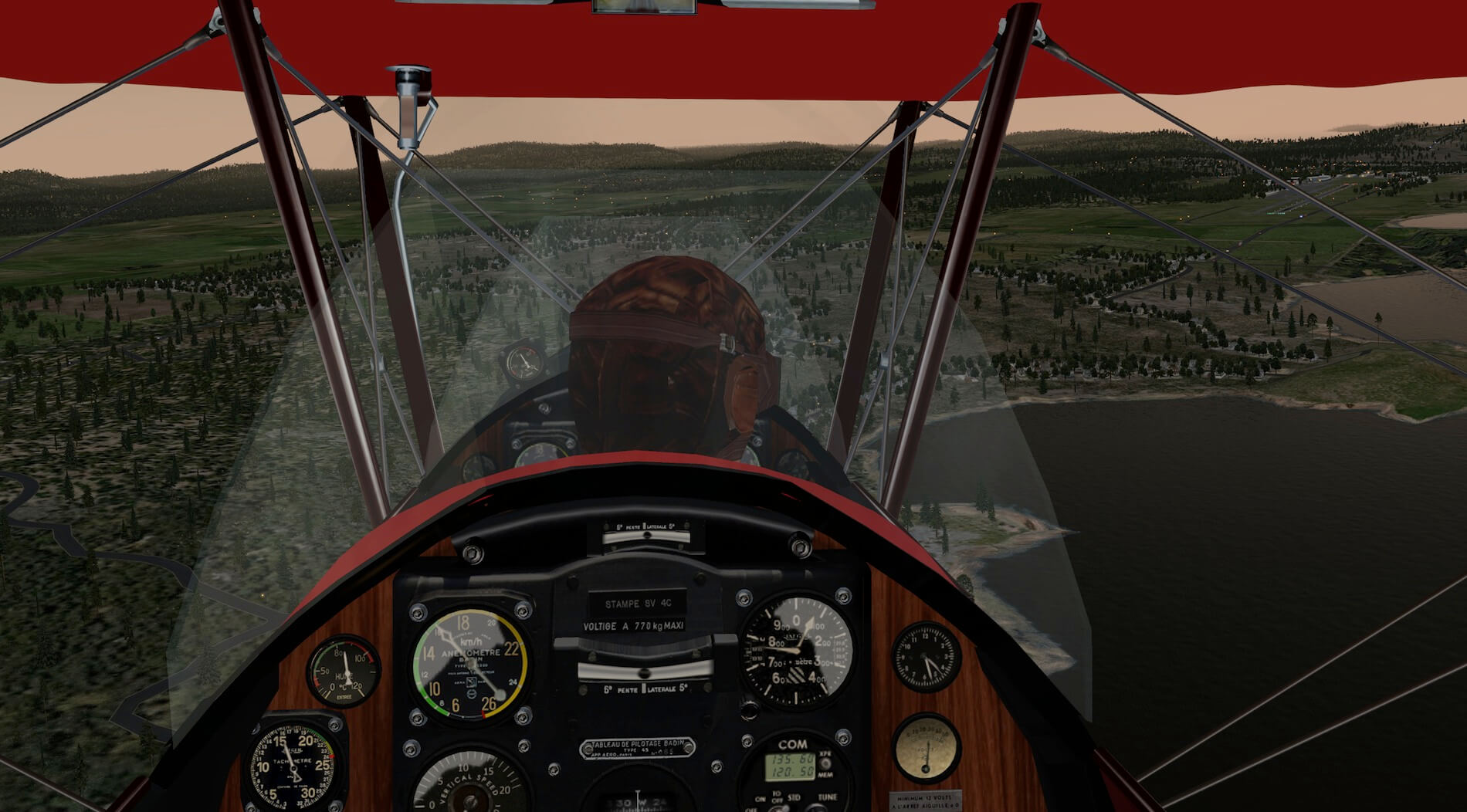 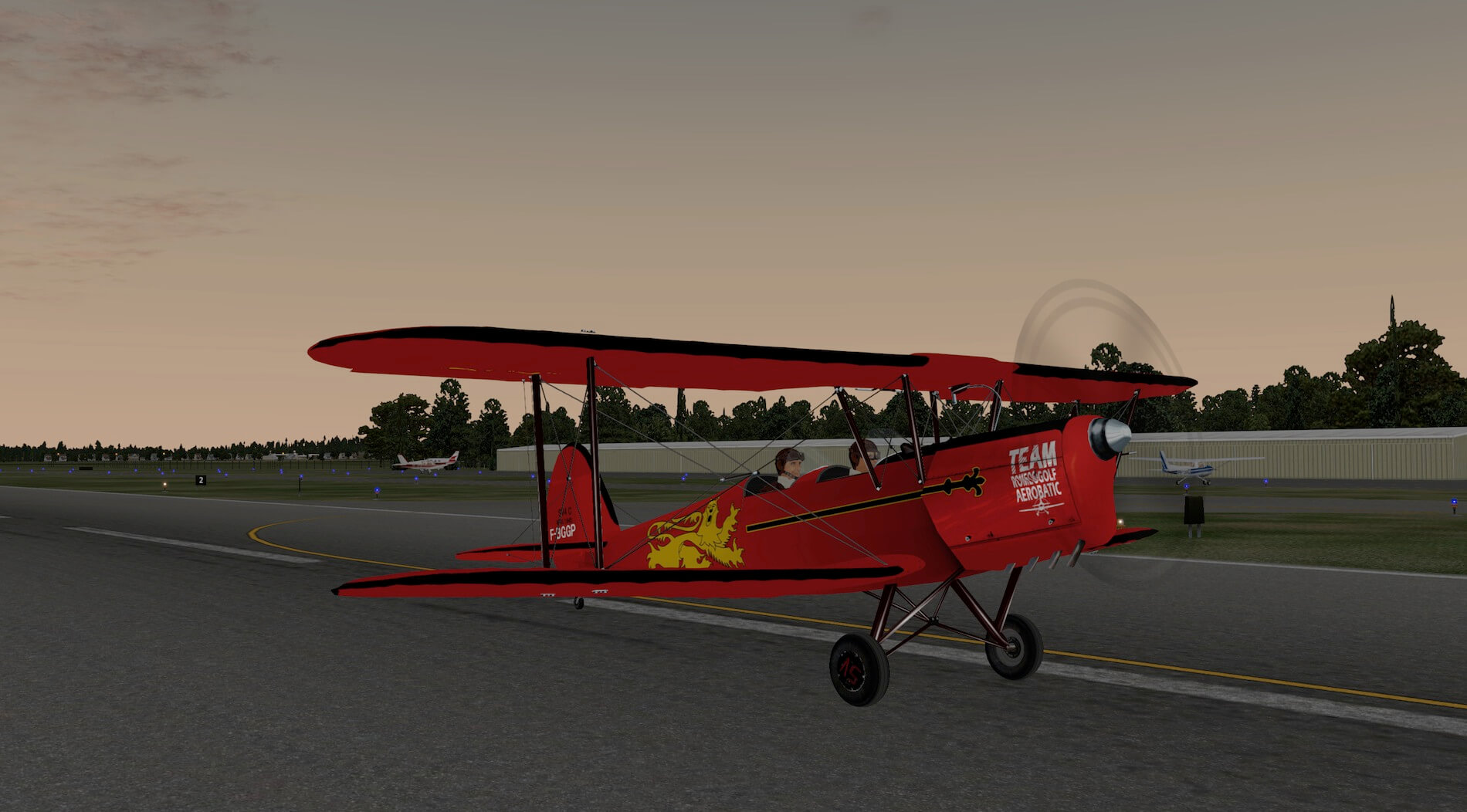 This is just a short flight impression of the XPFR Stampe SV4C, but I’ve got already a good idea about the flight characteristics of it. I’ve no idea if the flight dynamics are the same as the real Stampe, but it seems to fly solidly, so I’m happy with this freeware add-on aircraft.

And at the End

Let me start by saying that this was a pleasant experience testing the XPFR Stampe SV4C. You can download the Stampe SV4C via this dedicated XPFR link (https://xpfr.org/?body=aero_accueil). As I said, I enjoyed testing this freeware add-on XPFR aircraft and if you like these types of GA aircraft, then I’d encourage you to give it a try.
For this review, I used the following add-on products:
– Freeware | Friday Harbor Airport
– Freeware | Orcas Island

Finally, I would like to highlight the many freeware paintings from Leen de Jager or also known as “Flybike”. Leen has his own website where you can download many paintings for payware and freeware aircraft. Check it out at this link.

And then, I would like to bring to your attention the following ORG painting which is the only one that is not integrated in the XPFR Stampe package. At ORG, you’ll find from ORG user “afnavarro” a Marine and Armee paint package. These are both included in the Stampe SV4C package, so no need to download them separately. This is also the case with Leen de Jager his paint registration F-GKEB. The only one left, February 12th, 2014, it Leen’s OO-SVS painting. That painting can be downloaded via this link. 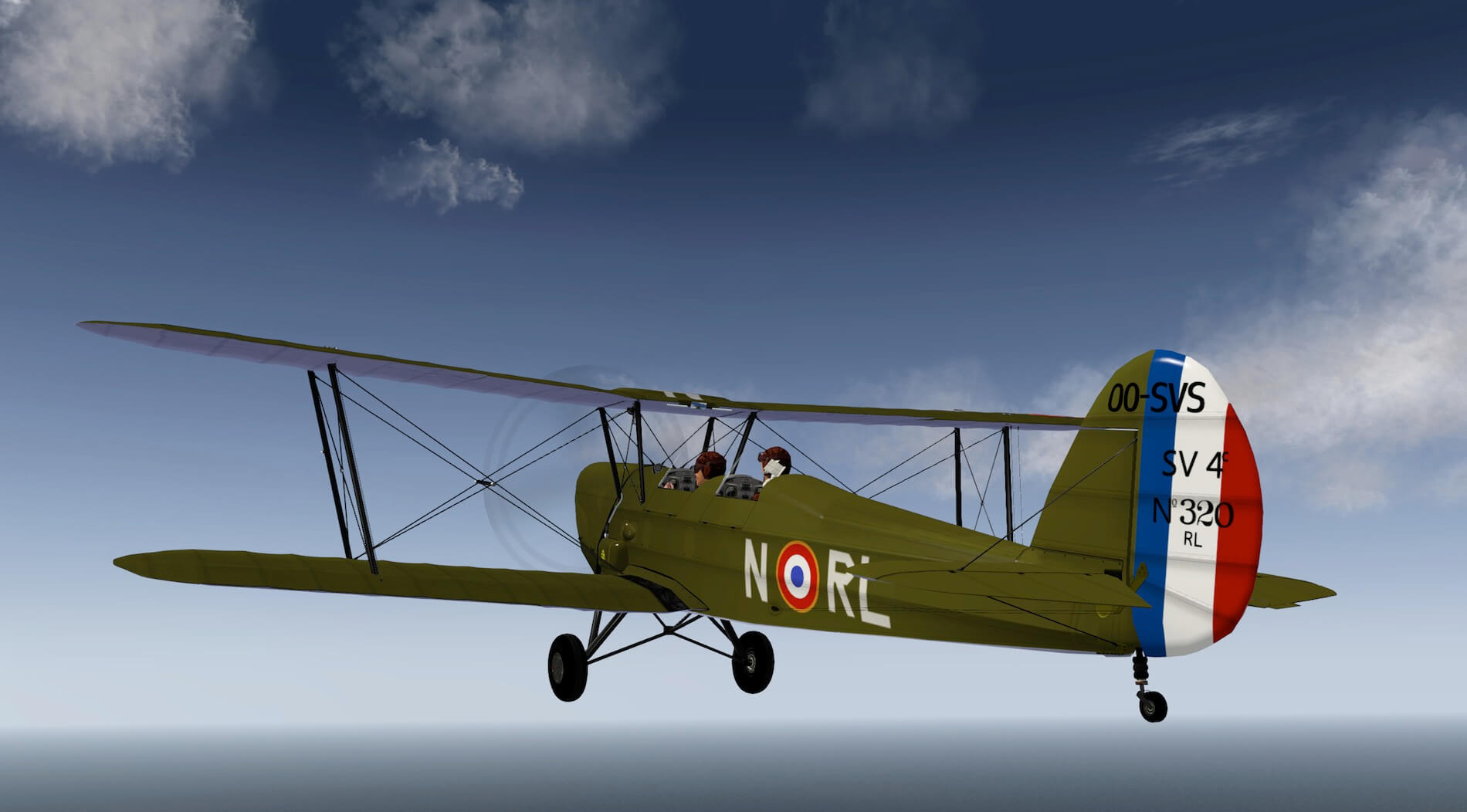 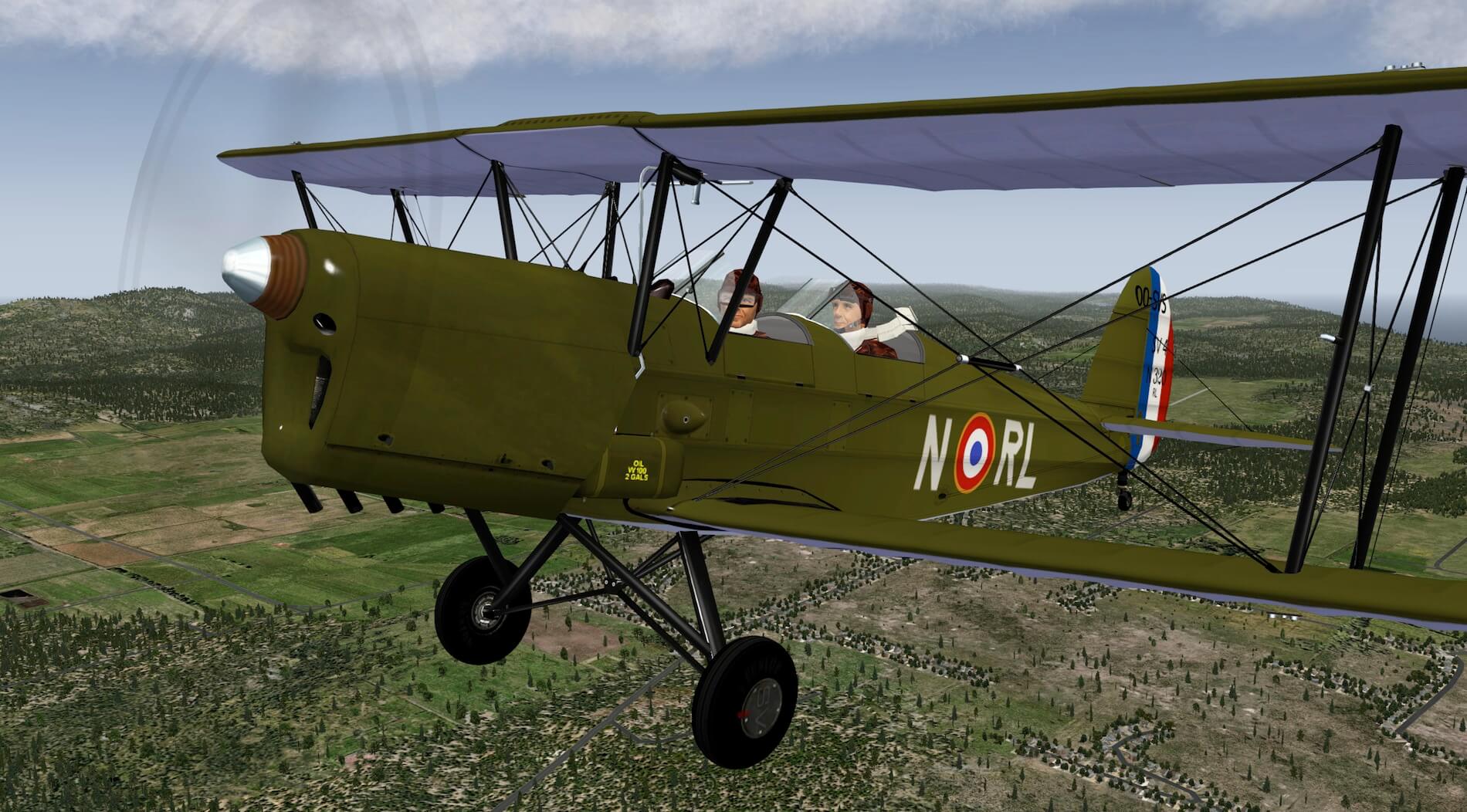 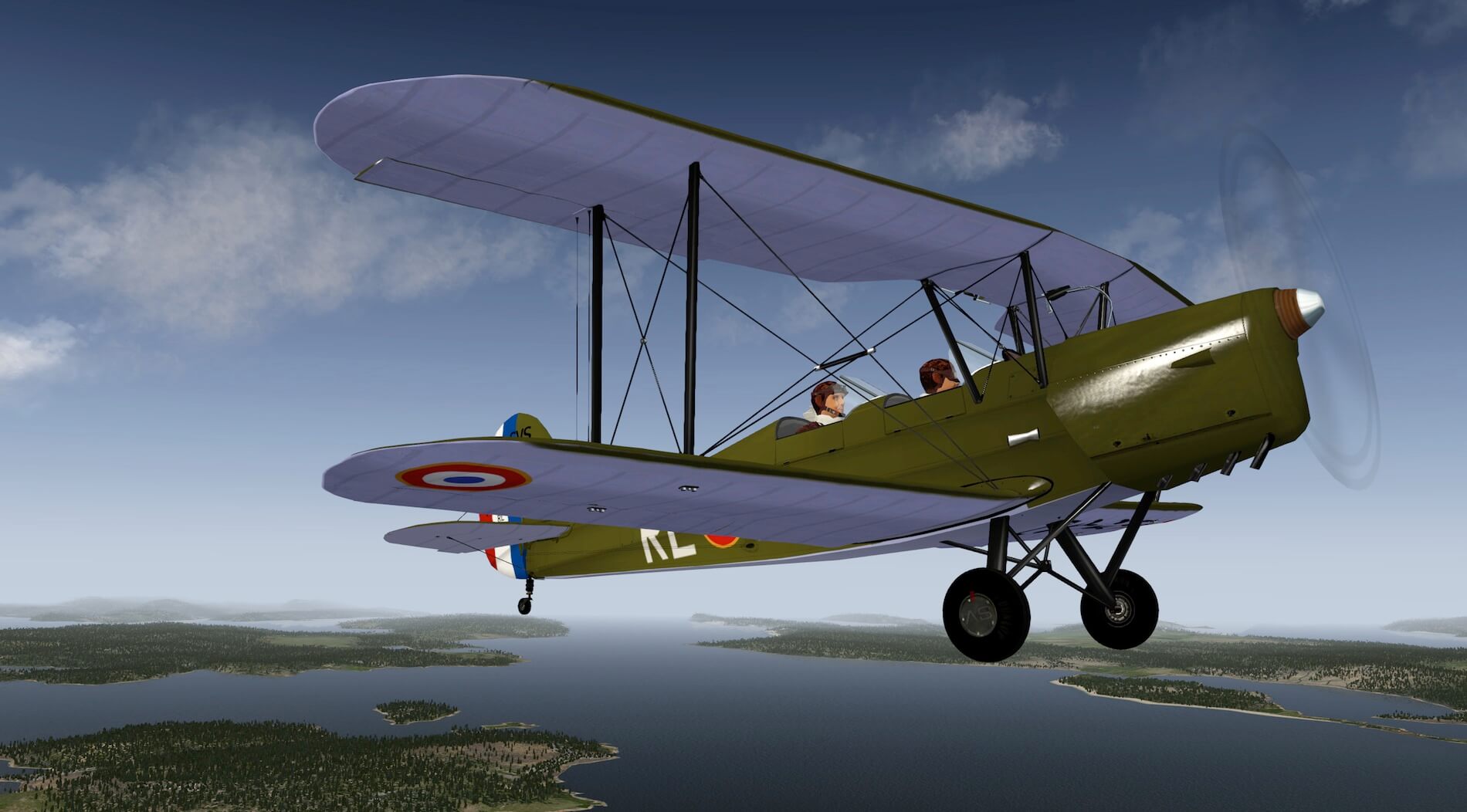 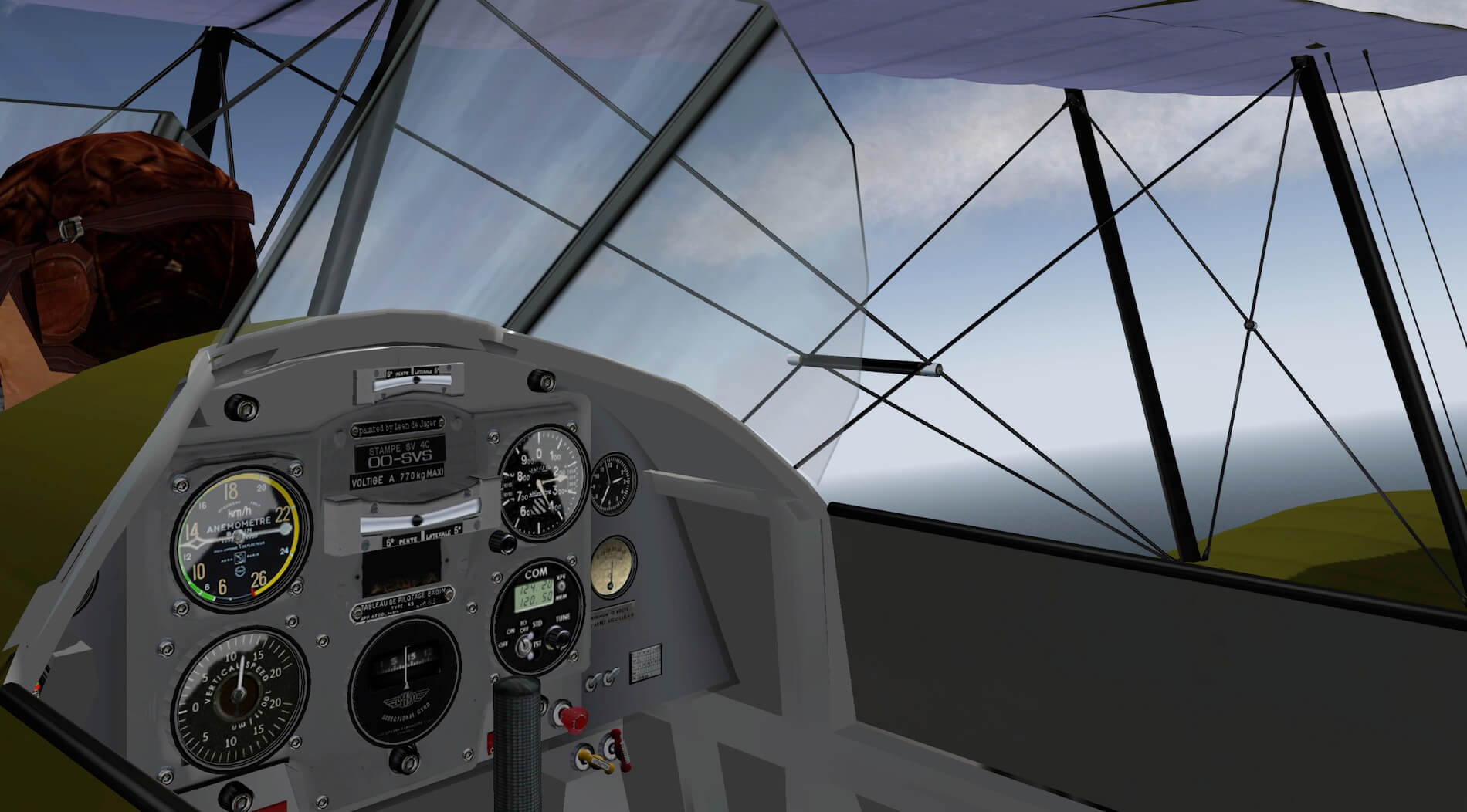