A while ago, I wrote an impression of the French “XP-France Simulation” Robin DR400-180 aircraft. This short review covers another Robin DR400-180, but this time from XPFR, also known as the “Association of French-Speaking Creators”. They offer two different DR400 140B models. One with only a 2D cockpit and a dummy 3D cockpit and the other with a completely modeled and operational 3D cockpit.

According to XPFR, “This Robin DR400 140B (2D) version has a functional 2D panel and an insert 3D cockpit (it’s only an aesthetic feature for the 3D view mode). The reason to use a 2D cockpit is that it works fine on low-end computers in addition to the fact that it is particularly easy to use with a mouse. Employing this technique achieves a very interesting performance level on low-end computers, also if flying over hi-quality sceneries.

The other major advantage of this technique is that it allows each user to easily modify his instrument panel via Plane-Maker, which is almost impossible to do with a 3D cockpit.

Anyway, we provided a 3D cockpit with this version, but this one is very simplified and as we said before, a dummy with no functional instruments. It’s only an aesthetic feature to give a pleasant cockpit in a 3D view while preserving the performance of your computer.”

XPFR also offers a Robin DR400 140B (3D). About this one they say; “Compared to the 2D model, this version has a full and functional 3D cockpit. In fact, there is no 2D cockpit on this version. This version is not customizable by the user and is intended for computers which are a little more powerful, but it is the most realistic version regarding the cockpit.”

How to install and what else?

Ones you’ve downloaded either or both packages, you simple unzip them and copy and paste the complete contents in Aircraft/General Aviation. Of course, feel free to create your own XPFR sub folder and install them in there. Each XPFR Robin comes with the following documents:
– A DR400 Lisez-moi or Read-me Acrobat file
– A French and English checklist Acrobat file
– A copyright, change log, license and readme text file

If this isn’t enough and you prefer to have a Dutch registration (PH-JFK) too, then download this one too from Leen “FlyBike” de Jager. Leen also painted a French registration (F-GGXS) that can be downloaded via this link. Both paintings can be used with the 2D and 3D model.

Before starting with my walk-around check, is there something else I need to tell you? Yes!

Both models are developed for XP9.50 and up and since they don’t use any plug in, you can use them without any problem in XP10 32 or 64 bits. That said, tested and reviewed the XPFR aircraft with 10.51. It could be that the aircraft also functions with X-Plane 11, but that’s something I haven’t checked. When you’ve tried it out with X-Plane 11, feel free to leave a comment or suggestion. Others, including me, would like to hear your experience too.

I think that’s it! Time for the real work … a walk-around check.

It depends a little on the livery you select, but I’m impressed with the liveries, in particular the pink painting. That’s really gorgeous and the overall painting quality tells me already a lot about the tiny details of the models. Regarding the models, it makes more sense to say that we deal with one aircraft model and two different cockpits. The external model, thus the aircraft fuselage, wings, tail etc. are the same for both models.

You can clearly see the Philips screws that are used to hold the landing light glass in position. Tiny or not, the aileron linkages haven’t been forgotten. While walking towards the aircraft tail, you can see the white glass cover of the anti-collision light and a well-modeled antenna. At the bottom trailing edge of the rudder you can find the white navigation light and the rudder control linkage, although this seems that it isn’t really modeled. With the canopy opened, you’ve got a good view of the 3D cockpit and seats.

Even from this distance the 3D cockpit looks good, but that’s what we’ve got to look into next. At least I’m enthusiastic about the external aircraft and paintings. 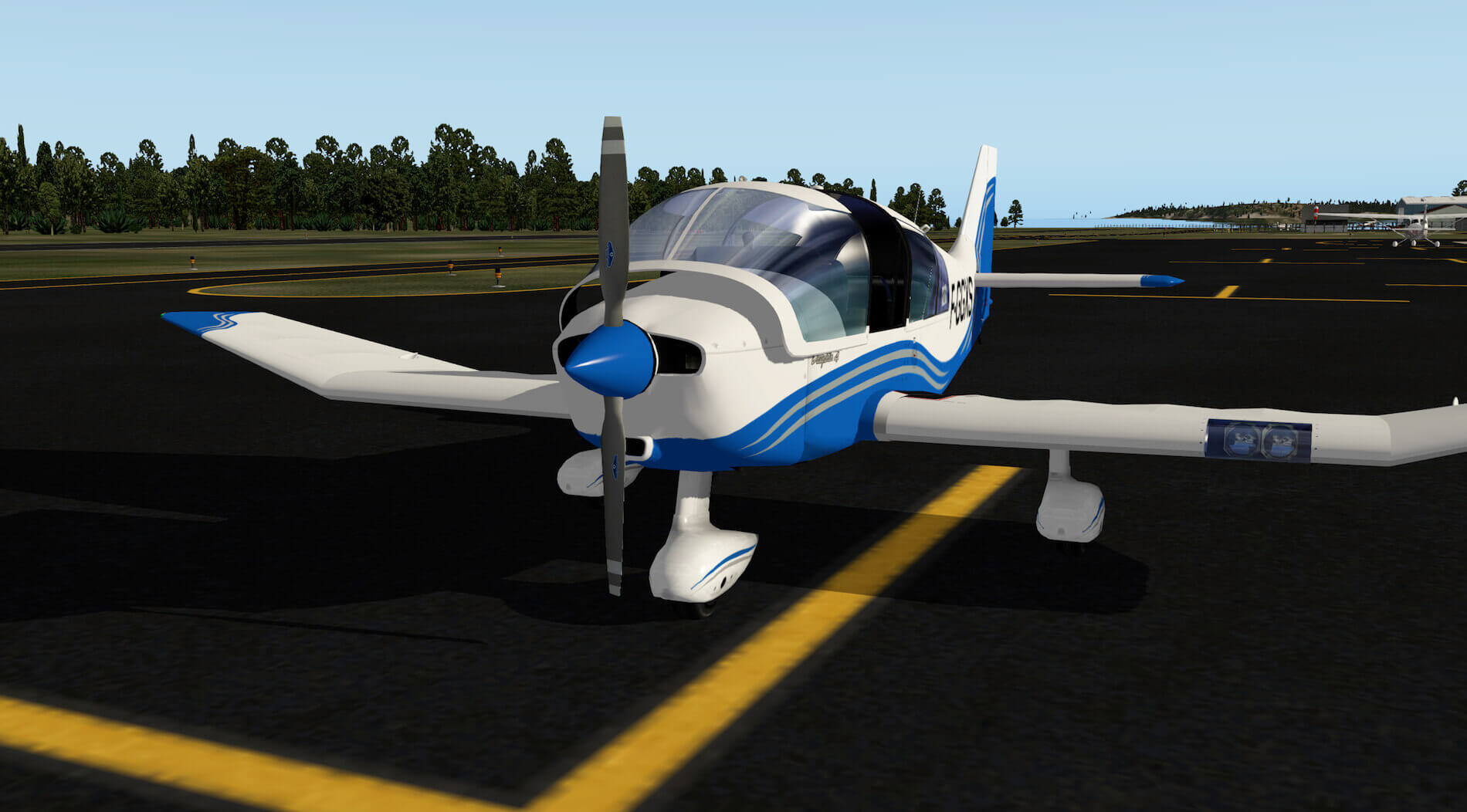 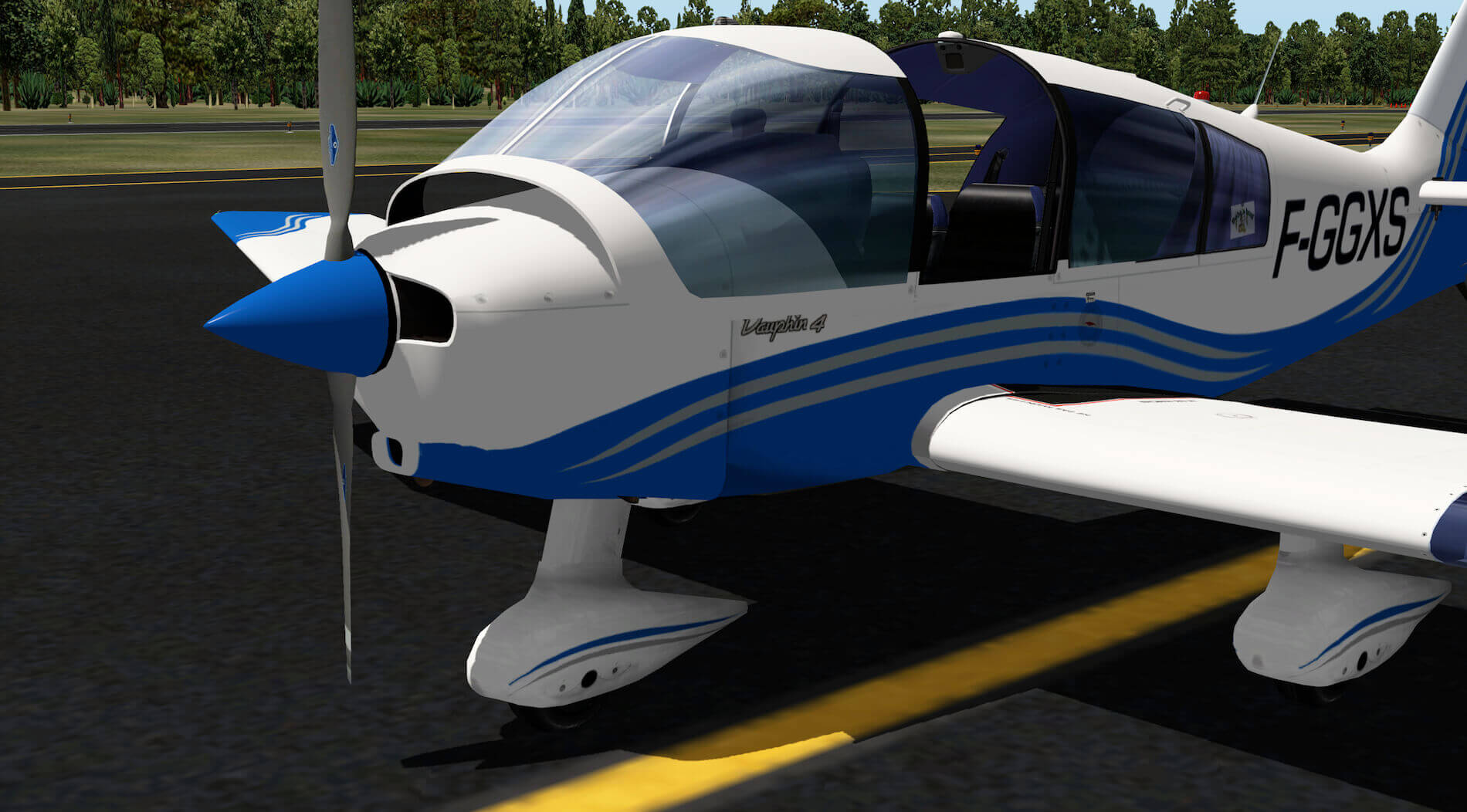 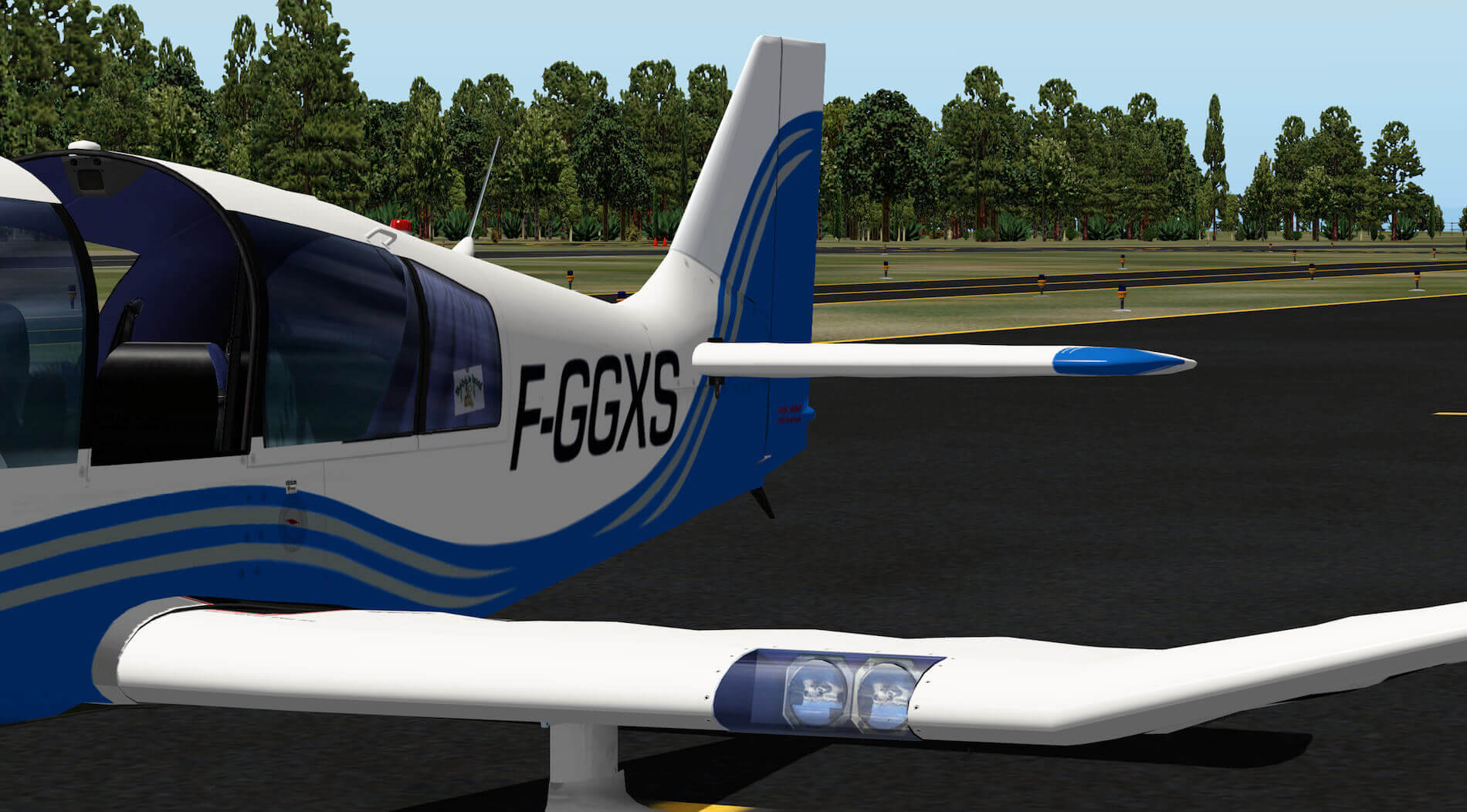 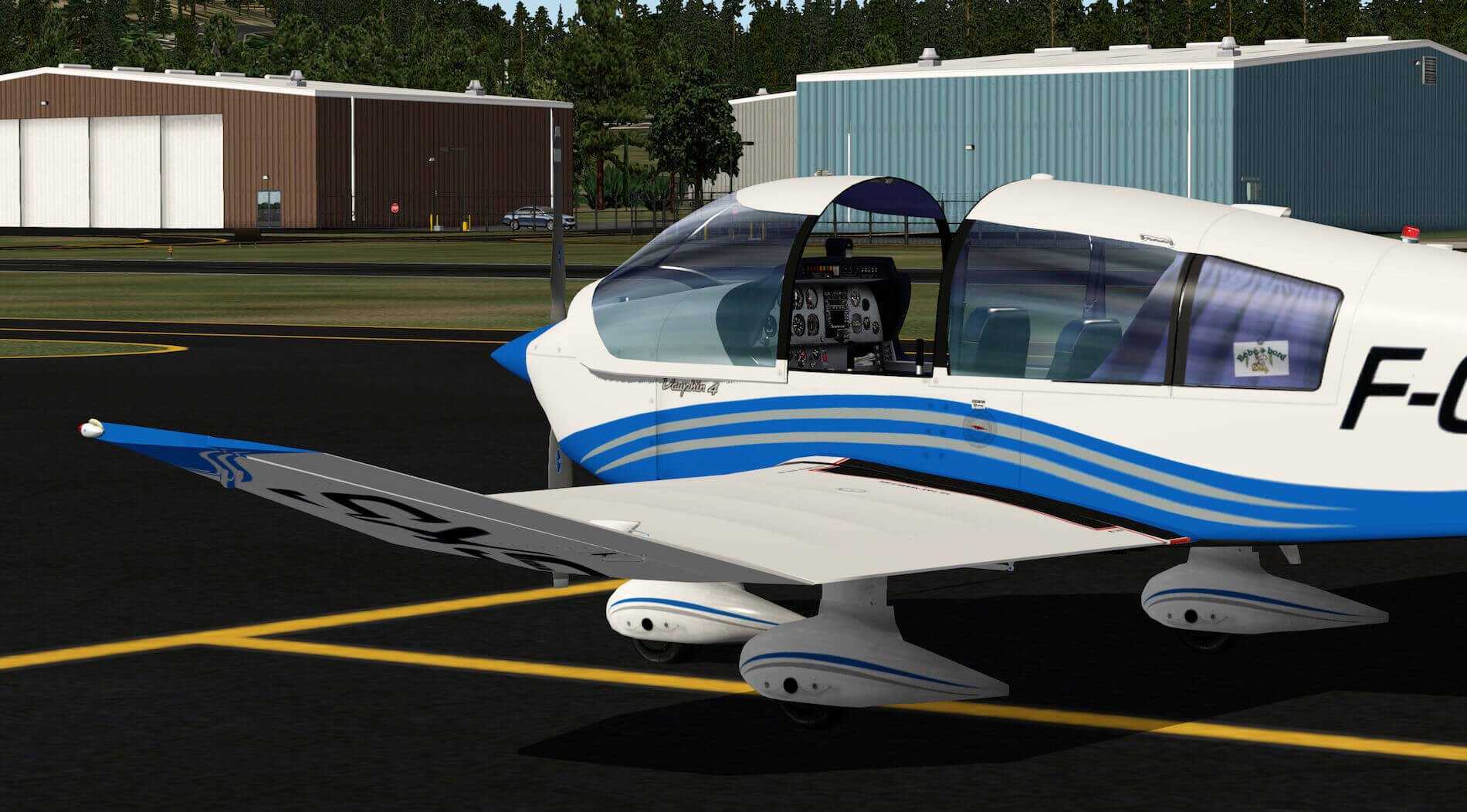 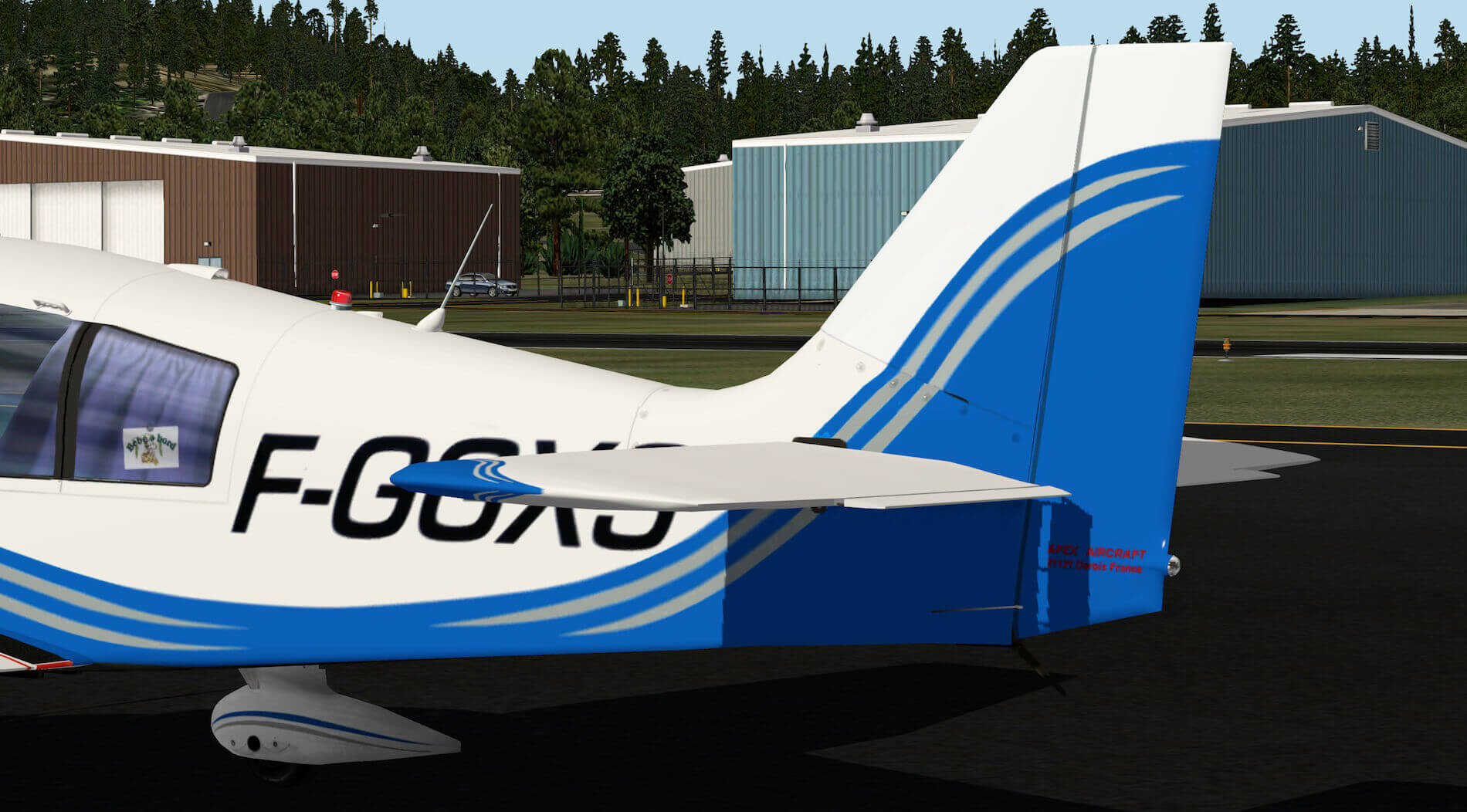 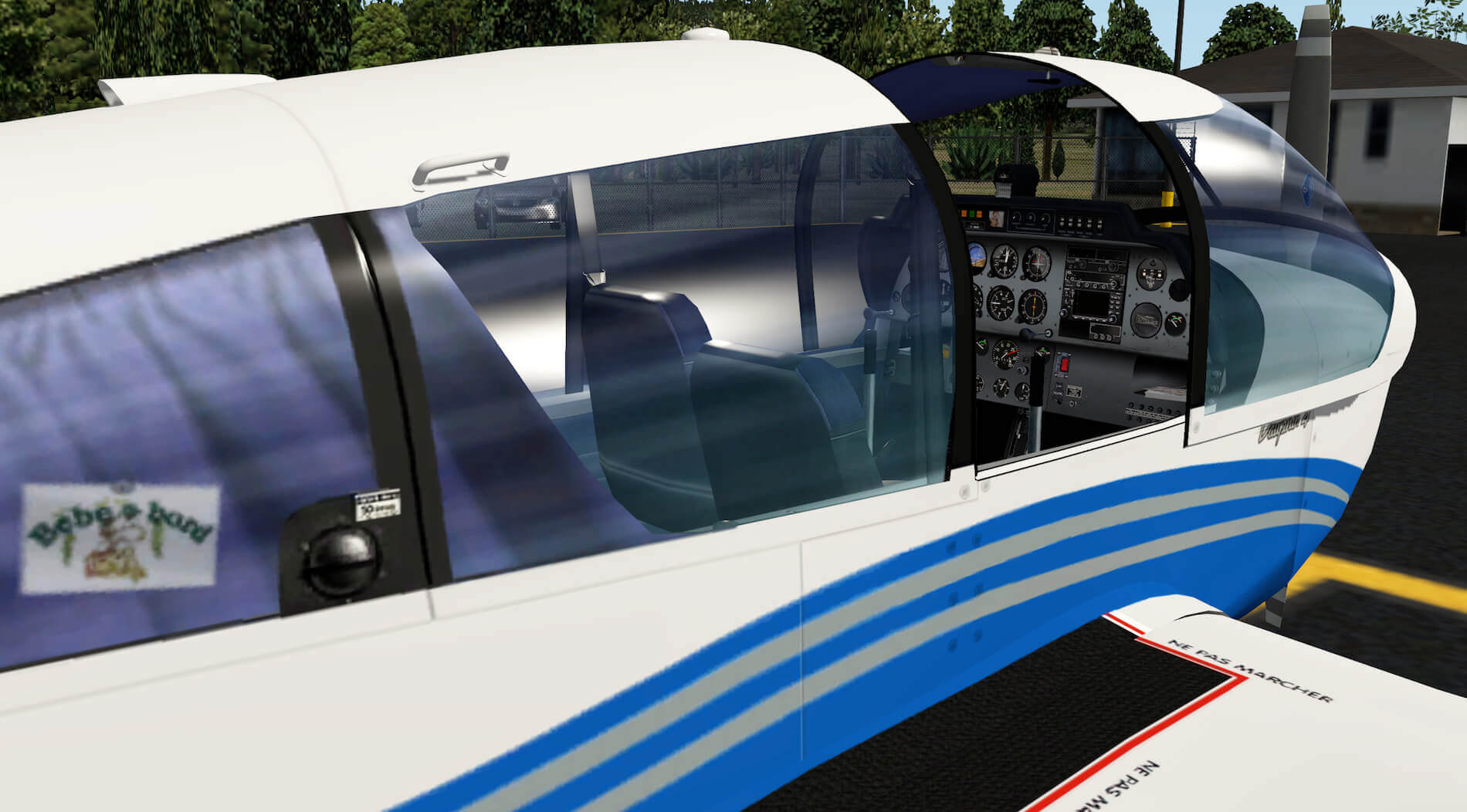 While stepping up onto a wing, followed by jumping into one of the pilot seats, I’m positively surprised about the way it’s made and how it looks and yes, I’m talking about the 3D cockpit version. I’m not only impressed by the instrument panel, but also how the sidewall looks as well as the seat covers. Although there are no leather seats, the cotton looks realistic and I bet that photo-real material is used to make this as well as to give it this look.

The mid console offers some controls. At least, it offers the pitch trim wheel. The stick itself is apparently made with a metal look alike photo-real material. It won’t take you long to find out that the dark grey panel is full of scratches giving you a realistic look, not something you would expect when it’s privately owned. But I like the scratches and the weathered look. The instruments are basic, so no fancy Garmin equipment, which is OK for me.

As long as it looks realistic and works as it should. I only found one issue and that’s the aircraft registration on the fuselage, which is F-BORA. However, on the instrument panel is written F-GNNE. Not really correct is it? 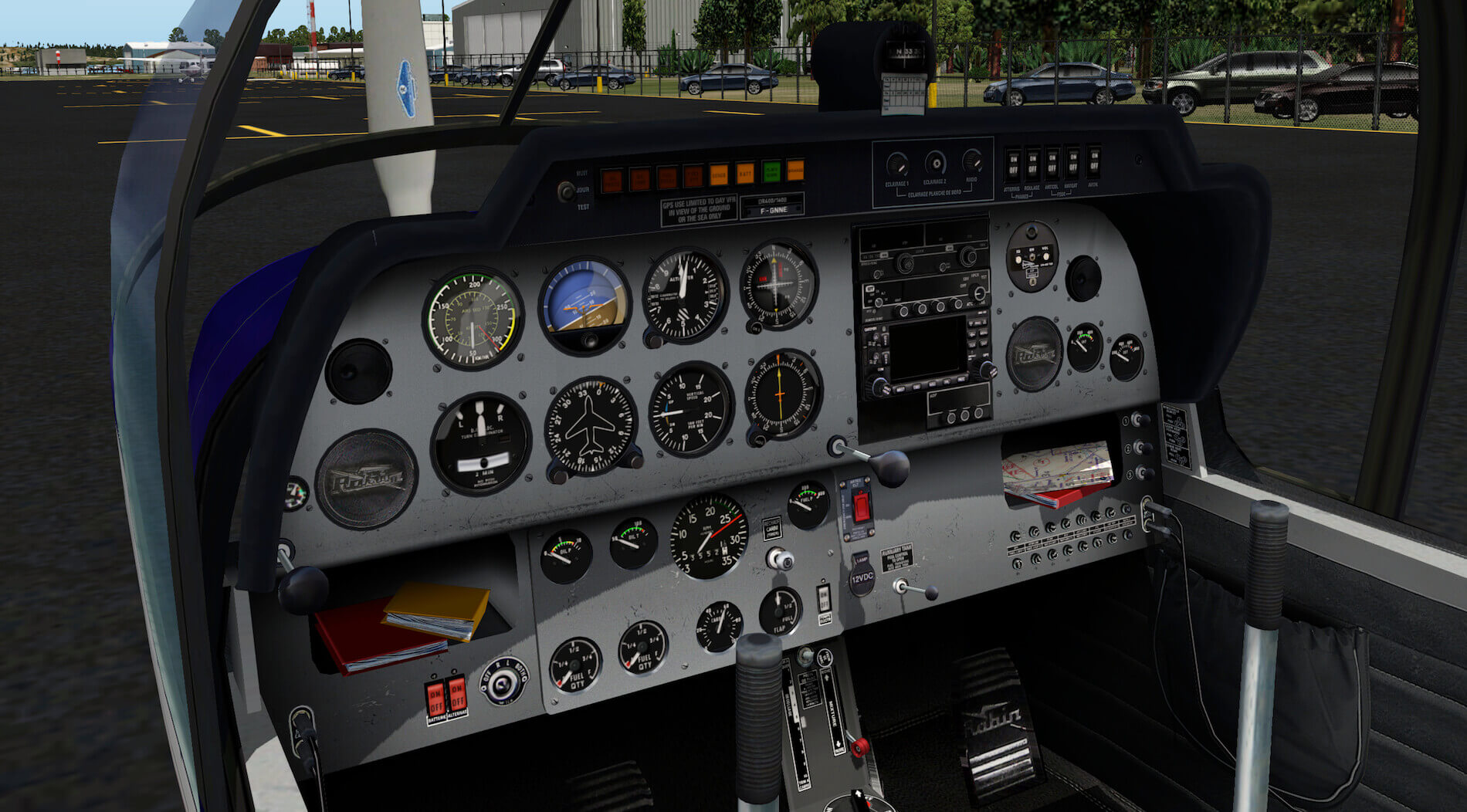 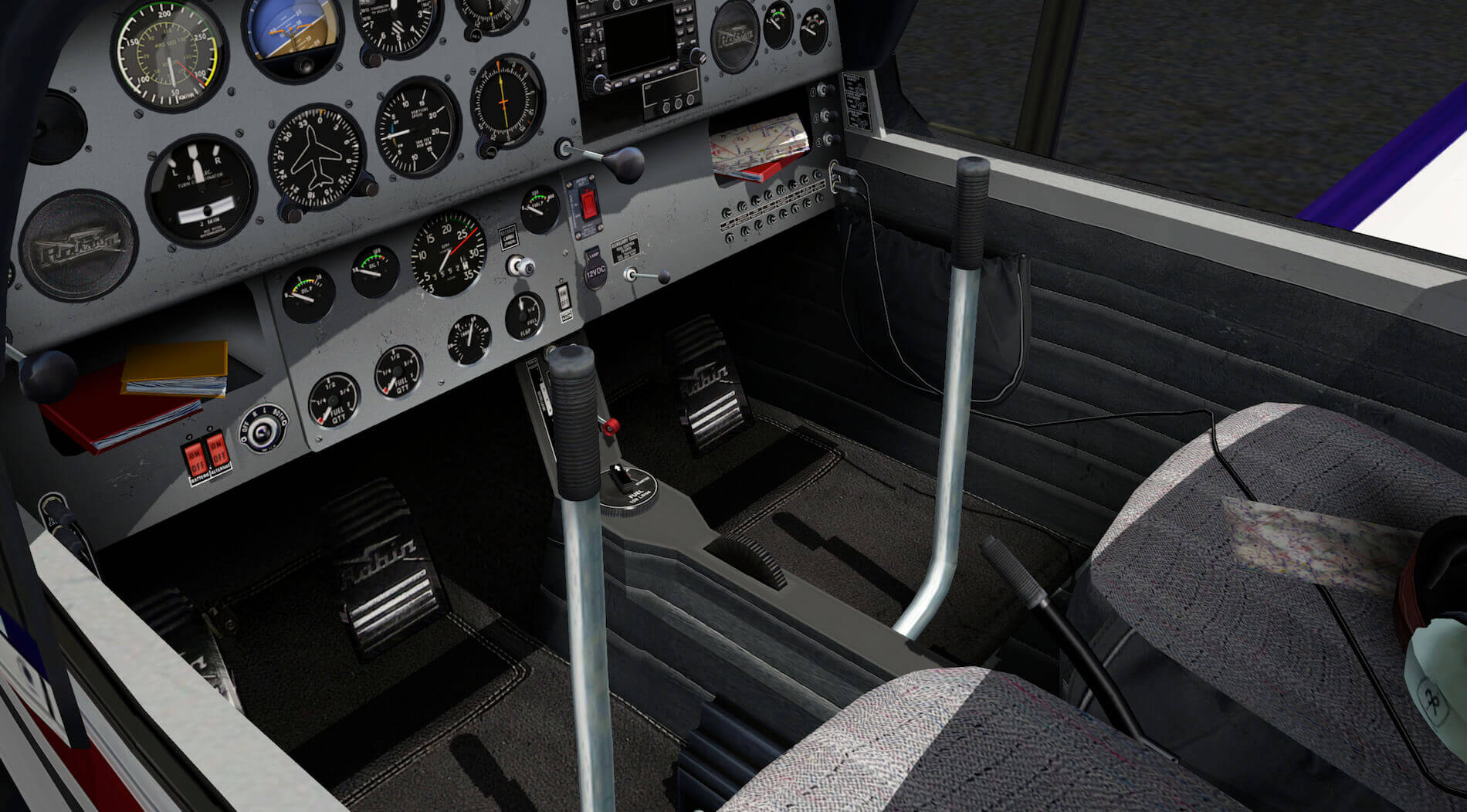 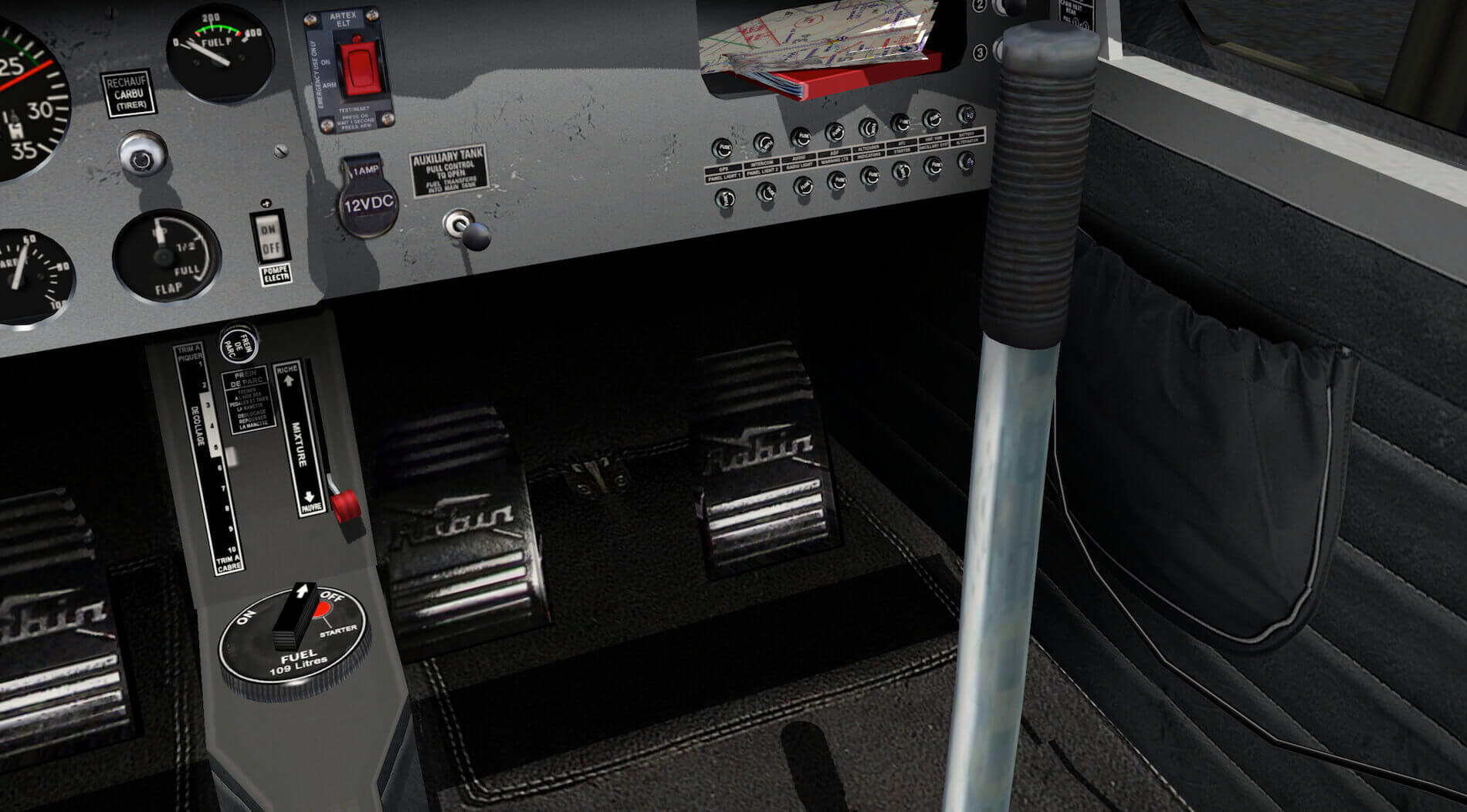 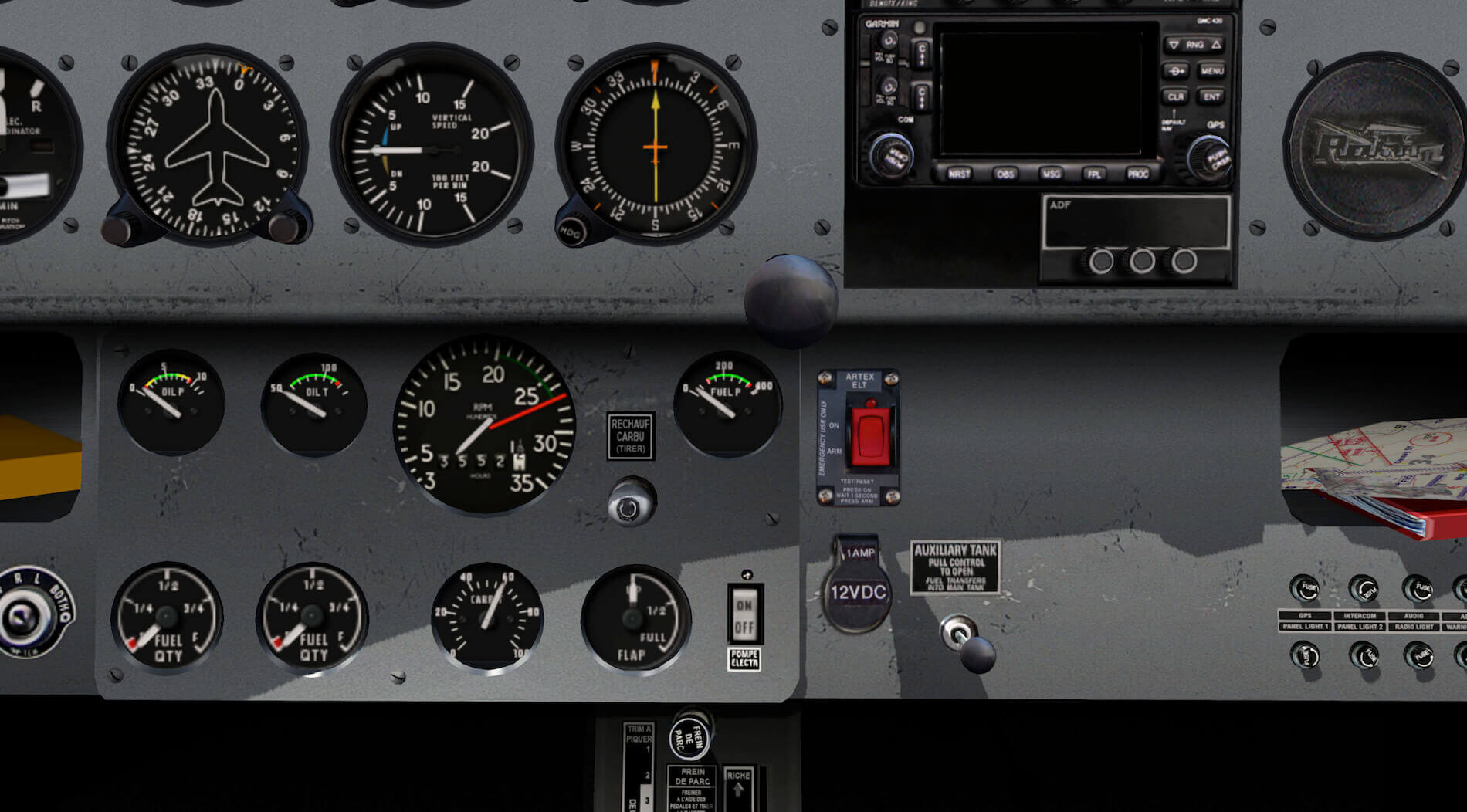 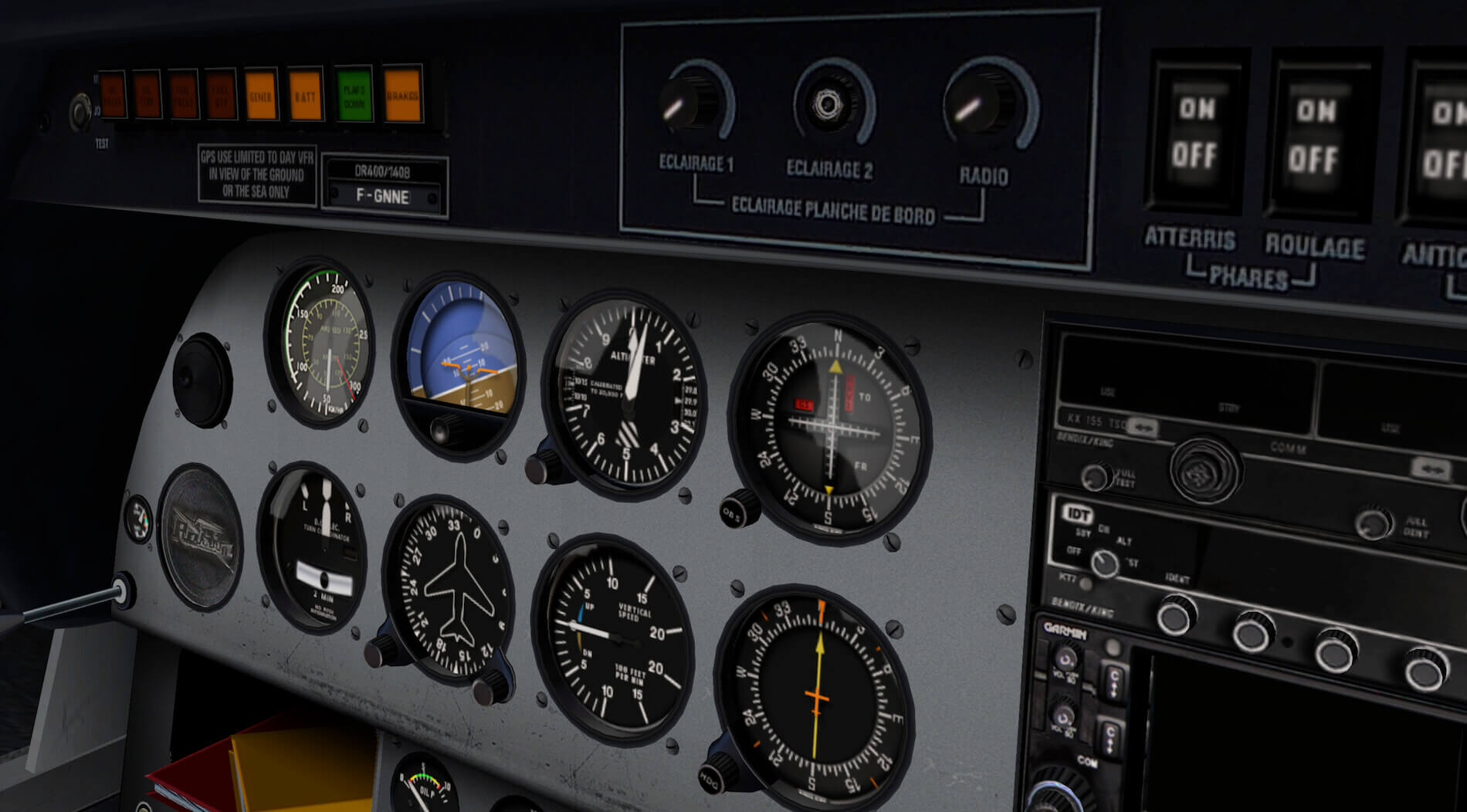 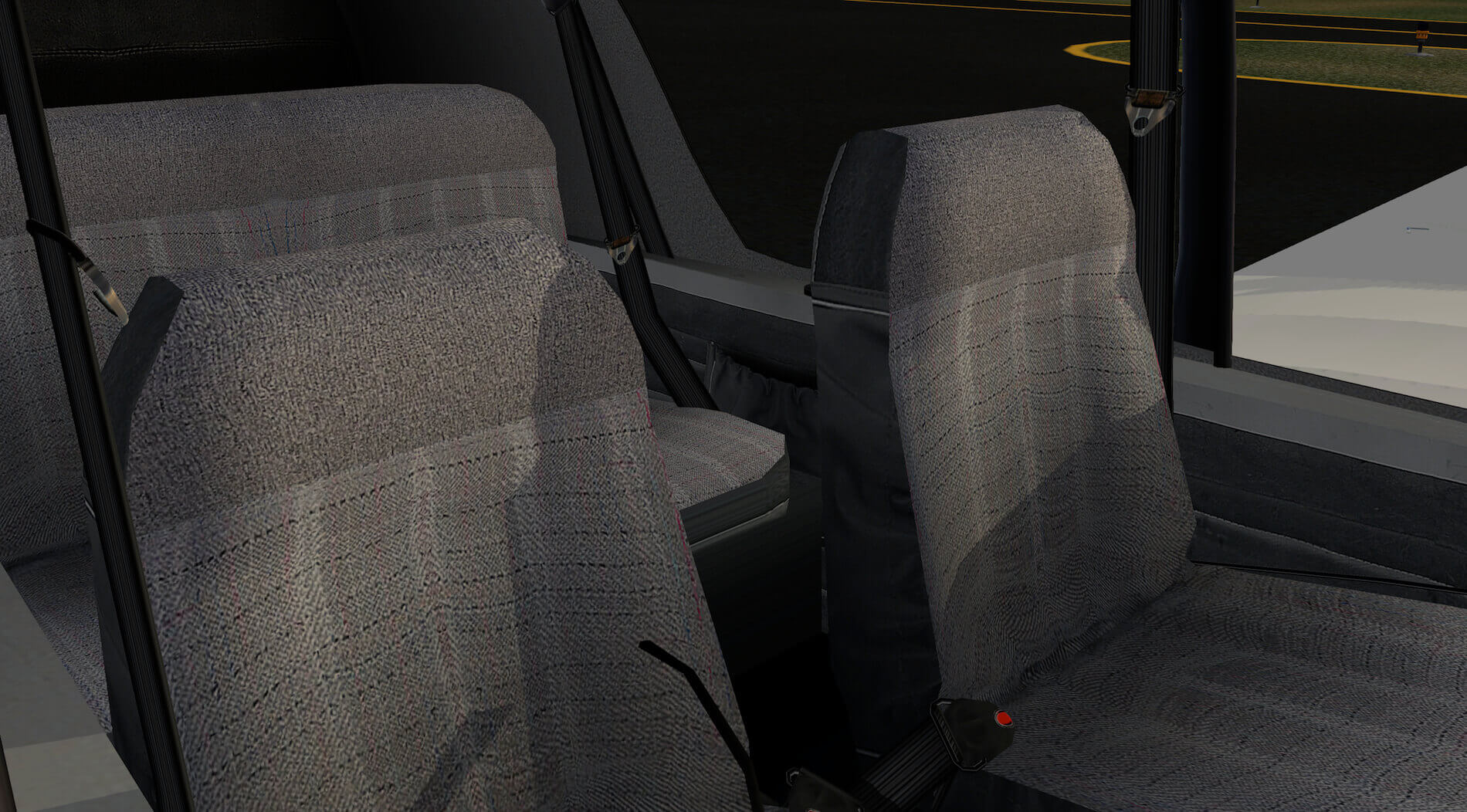 The cockpit doesn’t come with an Auto Pilot, but instead you’ll get a Garmin 430, an ATC transponder and COM/NAV equipment. Behind the two pilot seats there’s some space left for two passengers and that’s it. The cabin/cockpit area is well modeled and complete.

Then some shots of what kind of paintings you can expect. 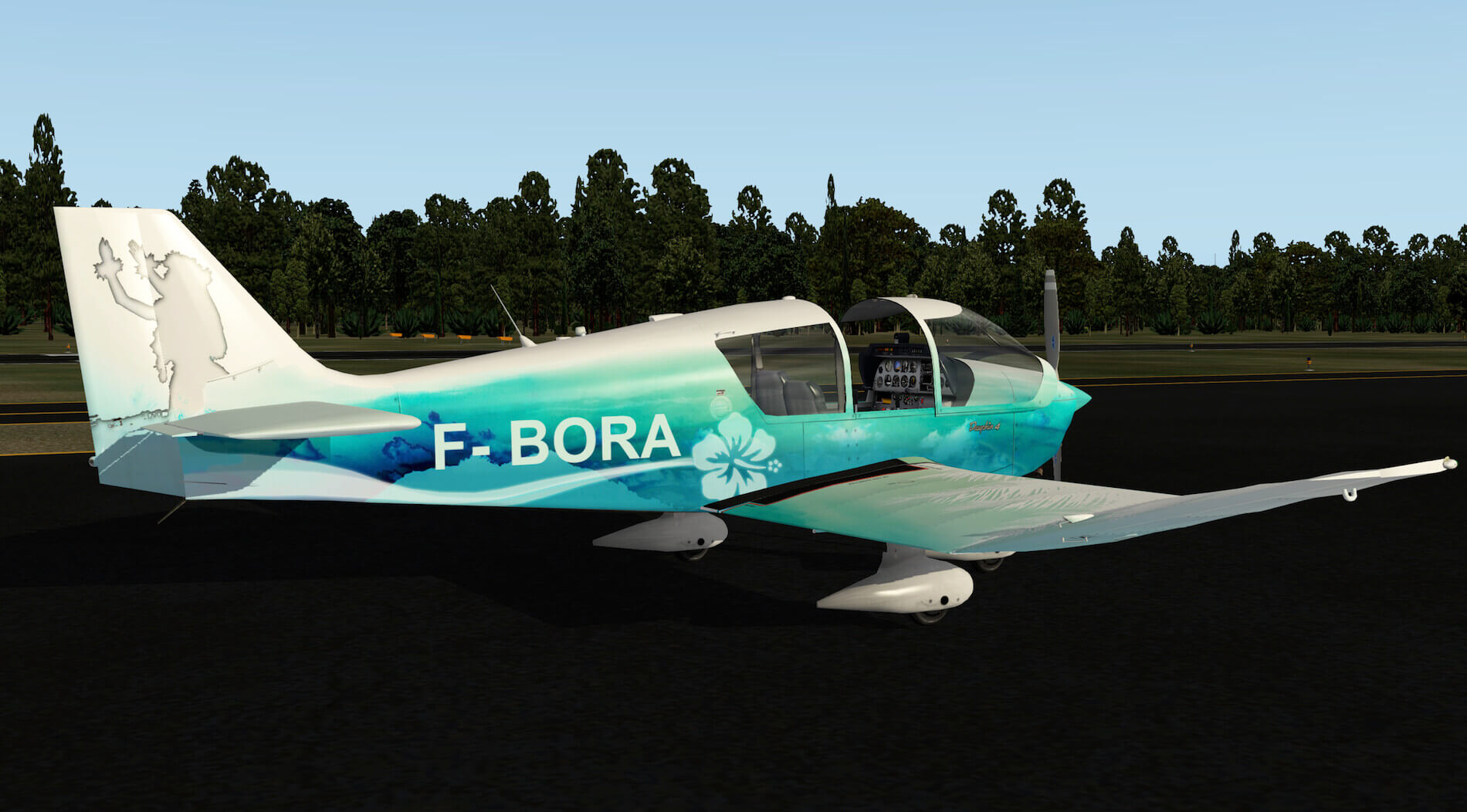 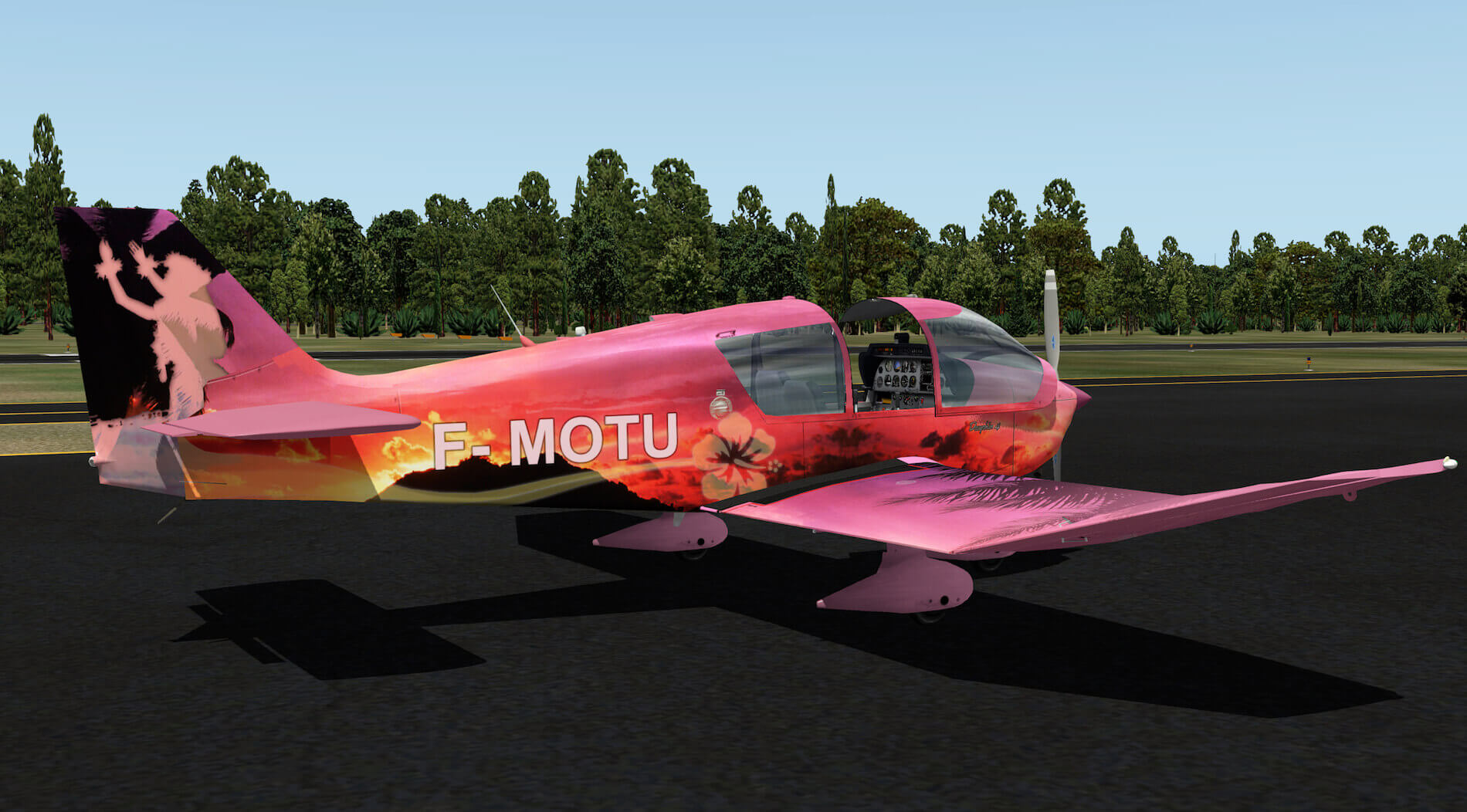 I can’t complain at all. But how does it fly?

Normally I would say now, let’s see how this aircraft flies, but this time I decide to print out the provided checklist which seems to be a little more then only a checklist. It comes with a complete pre-flight inspection, how to fly a standard circuit, an extended checklist with step-by-step procedures and several pages of emergency procedures. Overall, it’s well worth it for you to print!

But now it’s time to fly and see if I can fly it since my real experience is only based on a Cessna 152 with some hours on a Cessna 172. Taxing from my parking location to the runway shows me that on the ground it’s an easy aircraft to handle, the steering commands reply directly and I’ve got a good view of what’s happening in front of me. Just before turning onto the runway, I do my last checks and here we go.

During the takeoff, the Robin tends to move to the left, but with some yaw control you can easily keep it on the runway centerline. Once airborne, with flaps retracted, you’re as free as a bird. Trimming is possible and also good to know since there’s no Auto Pilot to do the work for you. 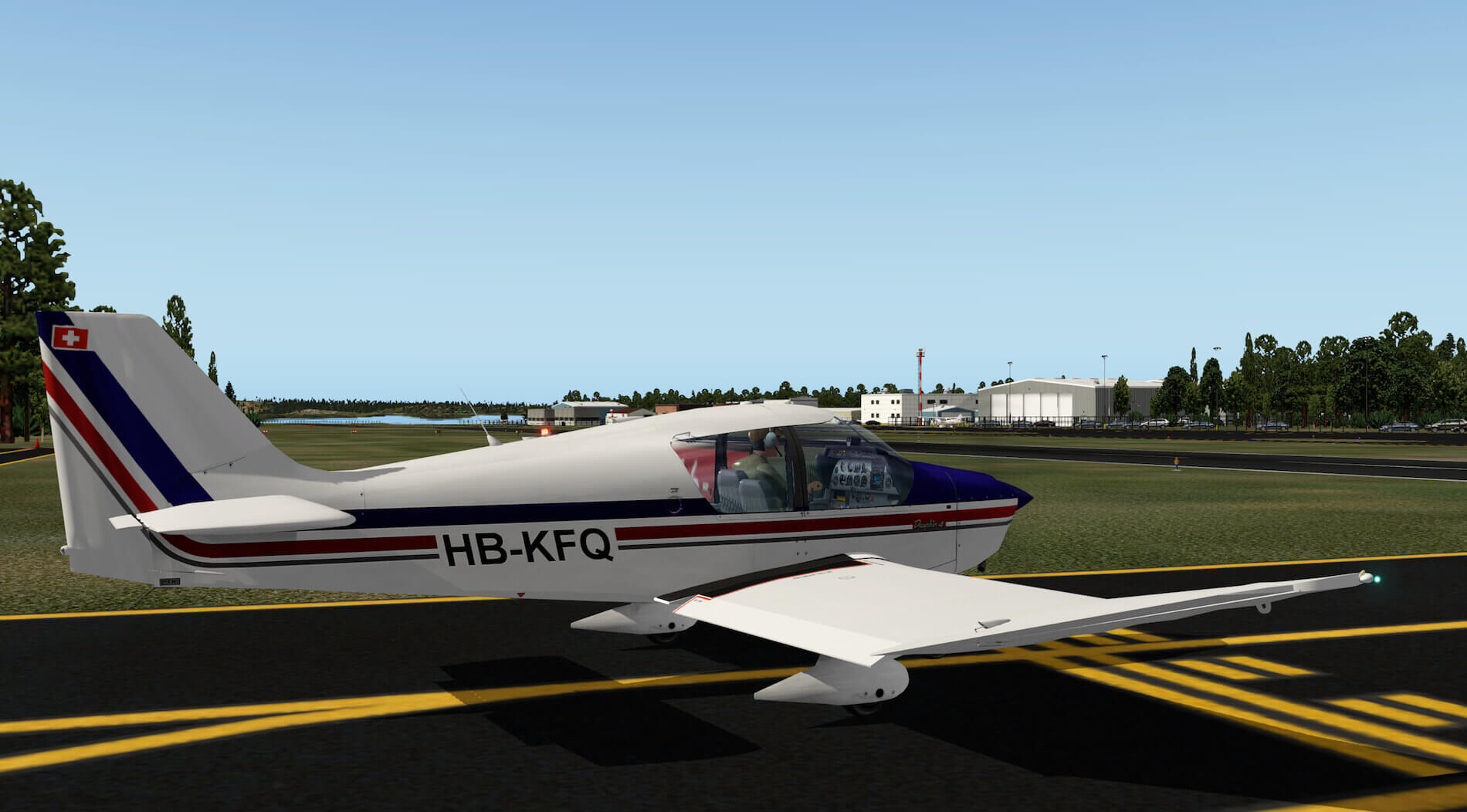 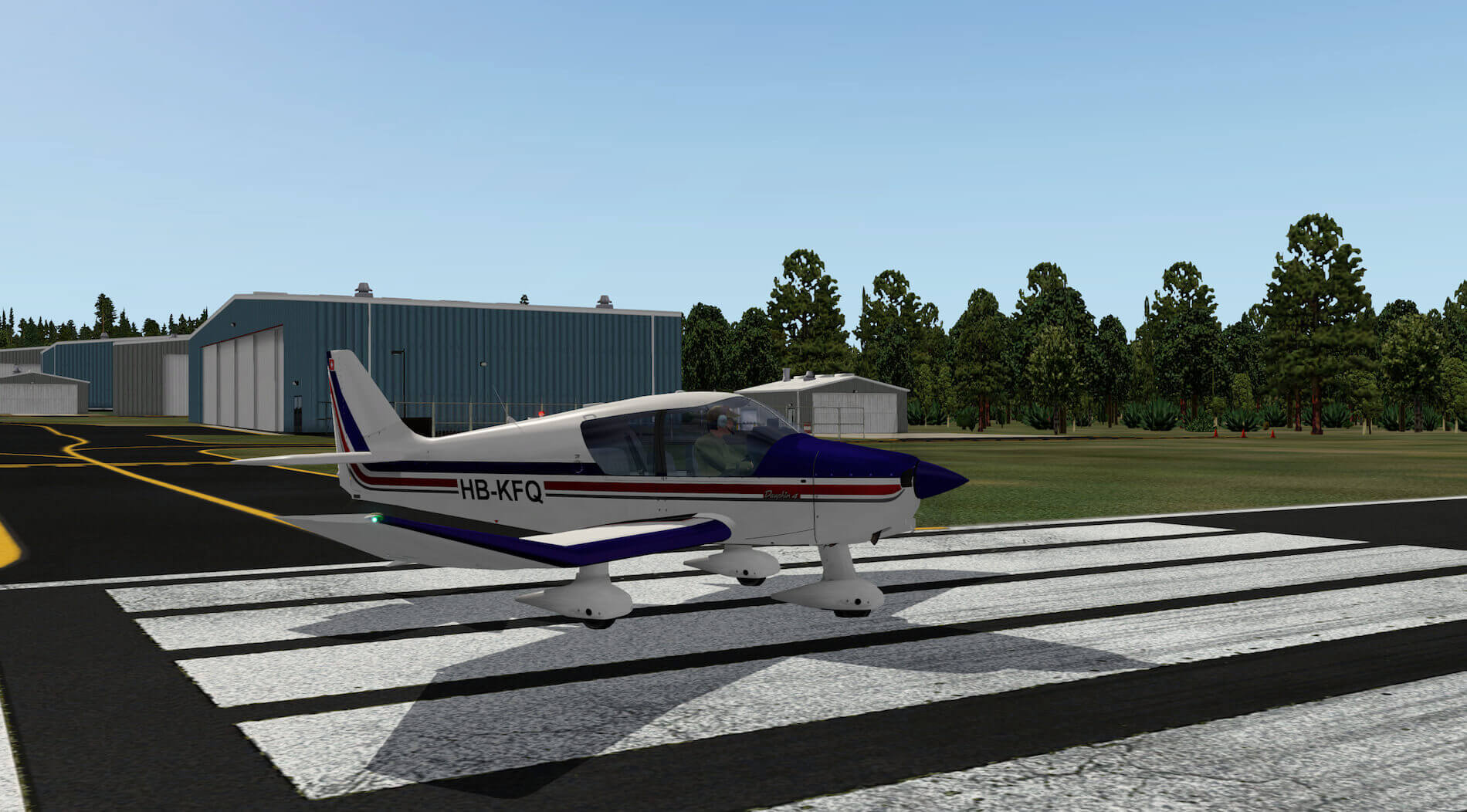 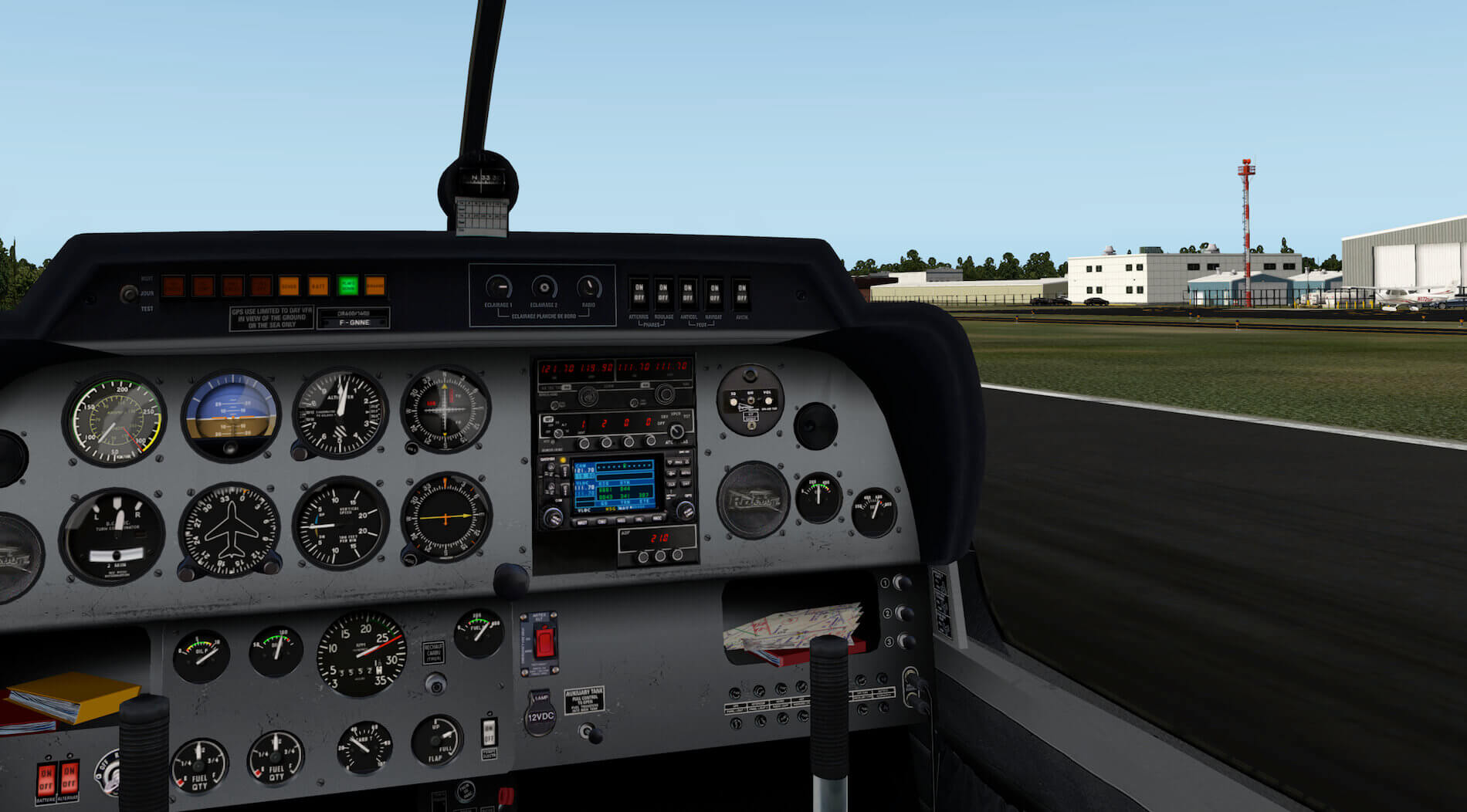 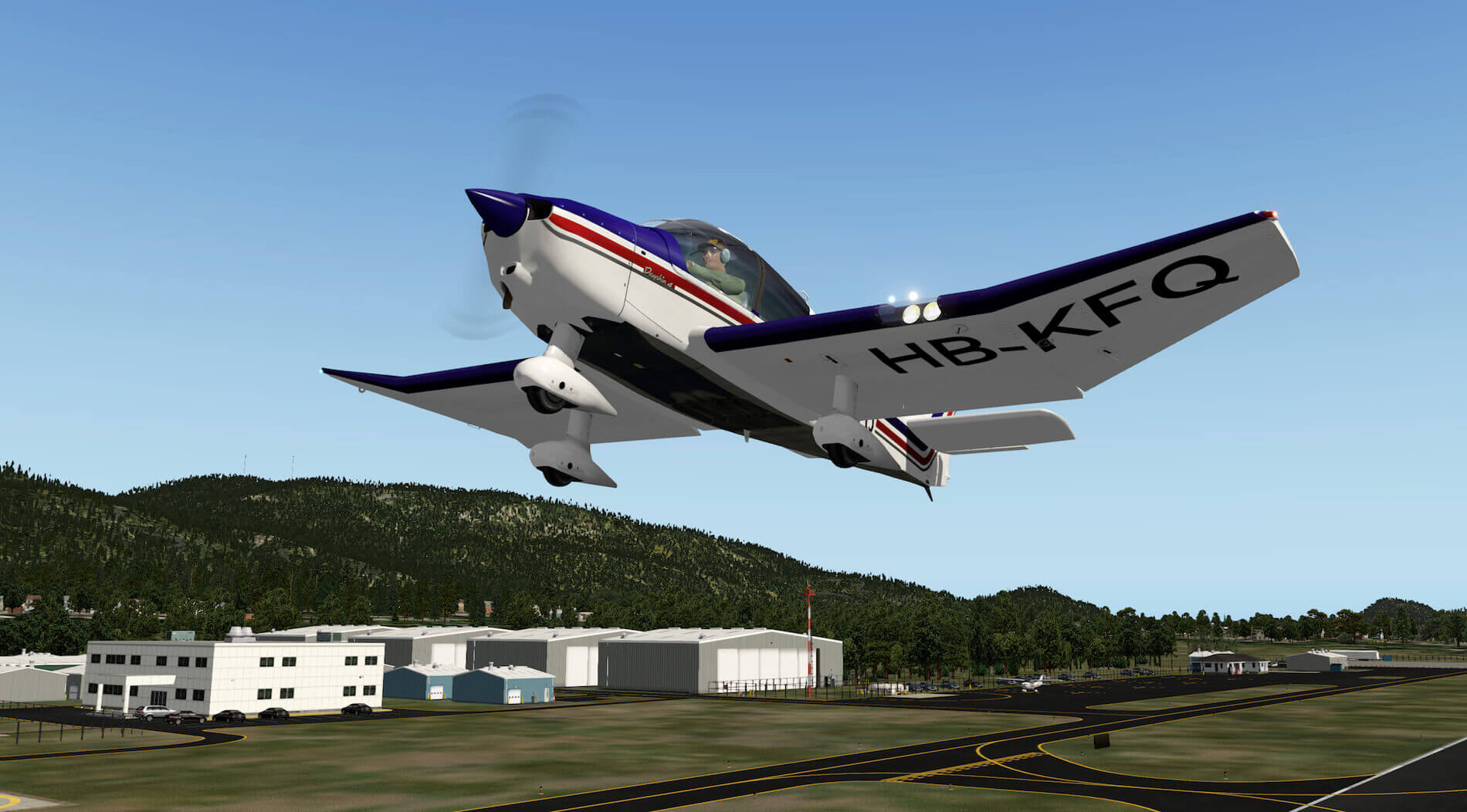 After a while, I think it’s time to execute some special flight maneuvers like steep turns, slow flights and pre-stalls. None of these maneuvers gave me any problems. Under every non-normal flight condition, the Robin stays controllable which makes me happy. It gives me also chance the check the instrumentation once more for a more thorough check.

As I wrote before, during my 3D cockpit check, it seems all is modeled with an eye for detail and now, during my flight, I still think this is the case. Even when you zoom in on the instrument panel, it’s good to see with how much love this freeware aircraft is made.

This is really something we should not forget … it’s freeware and comes with some awesome liveries including the two from Leen “FlyBike” de Jager.

The following screen shots show you some close-ups of the instrument panel as well as other 3D cockpit parts. 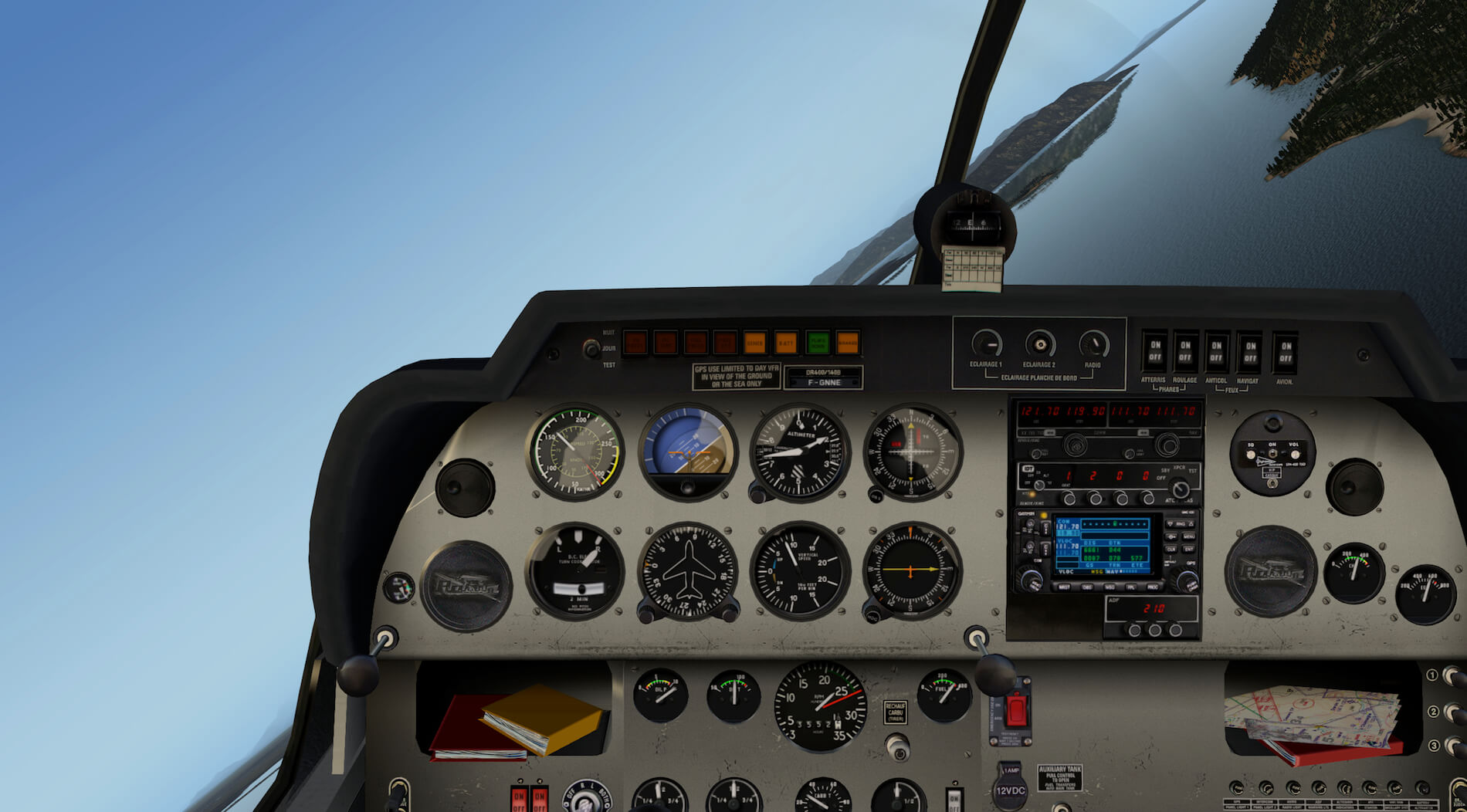 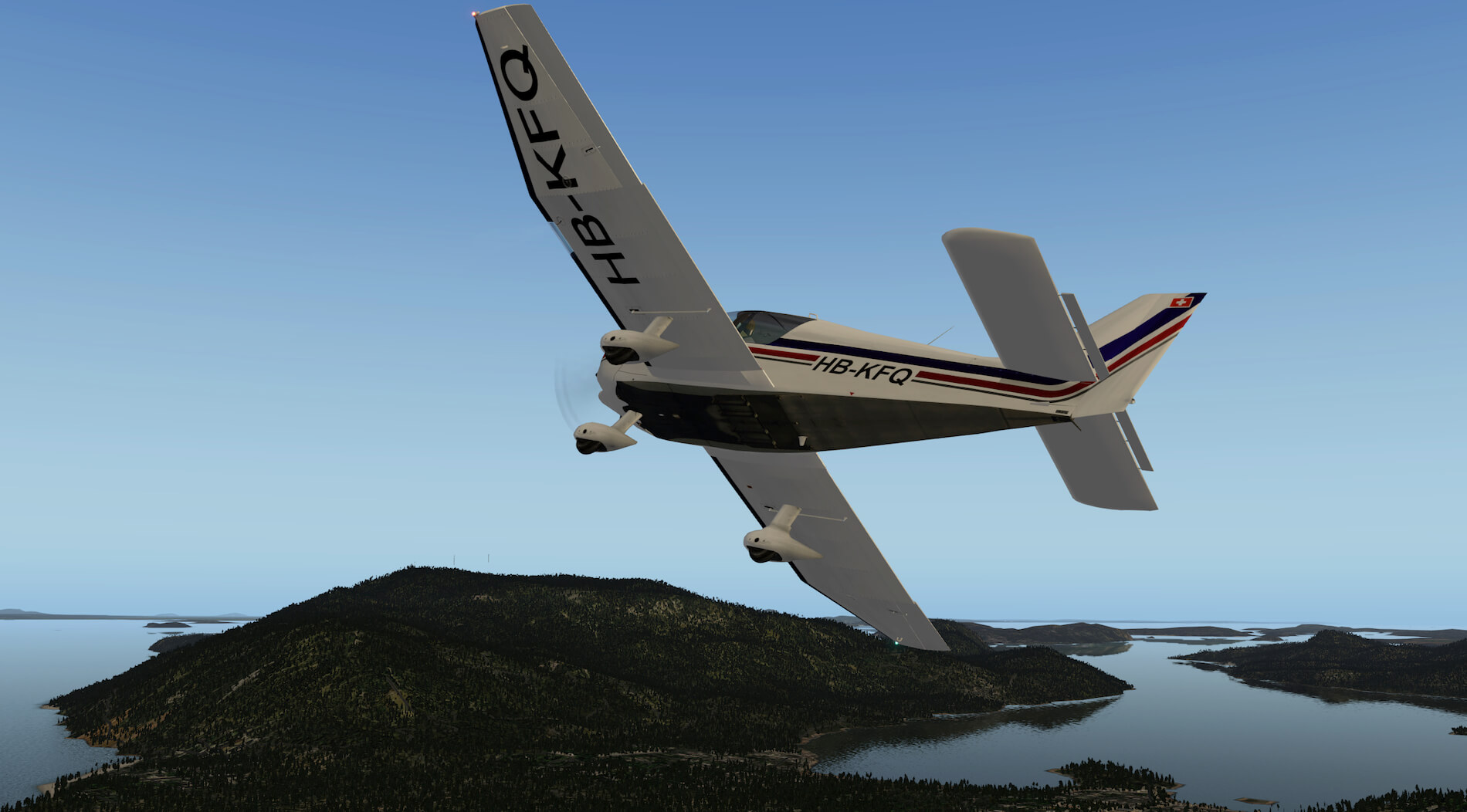 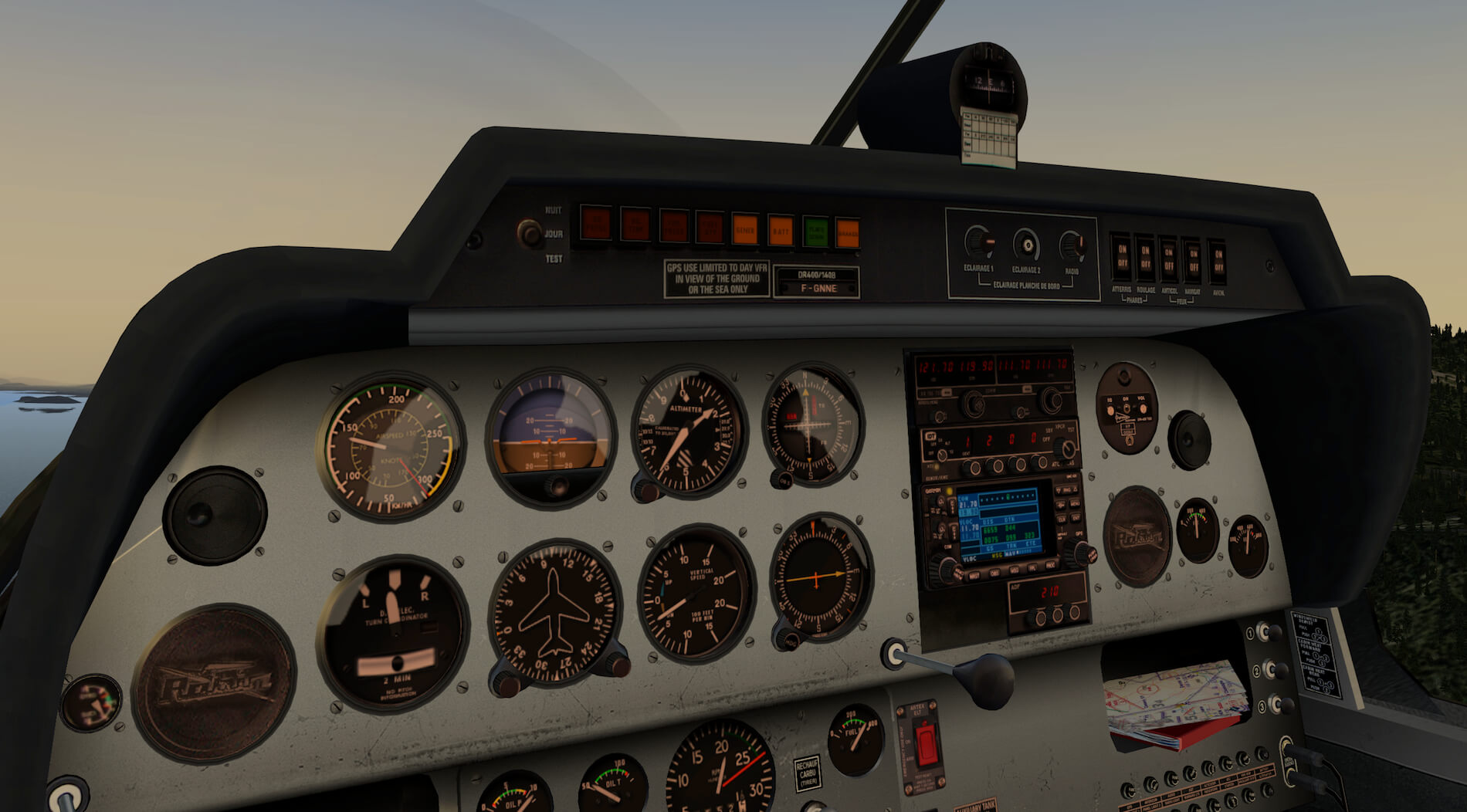 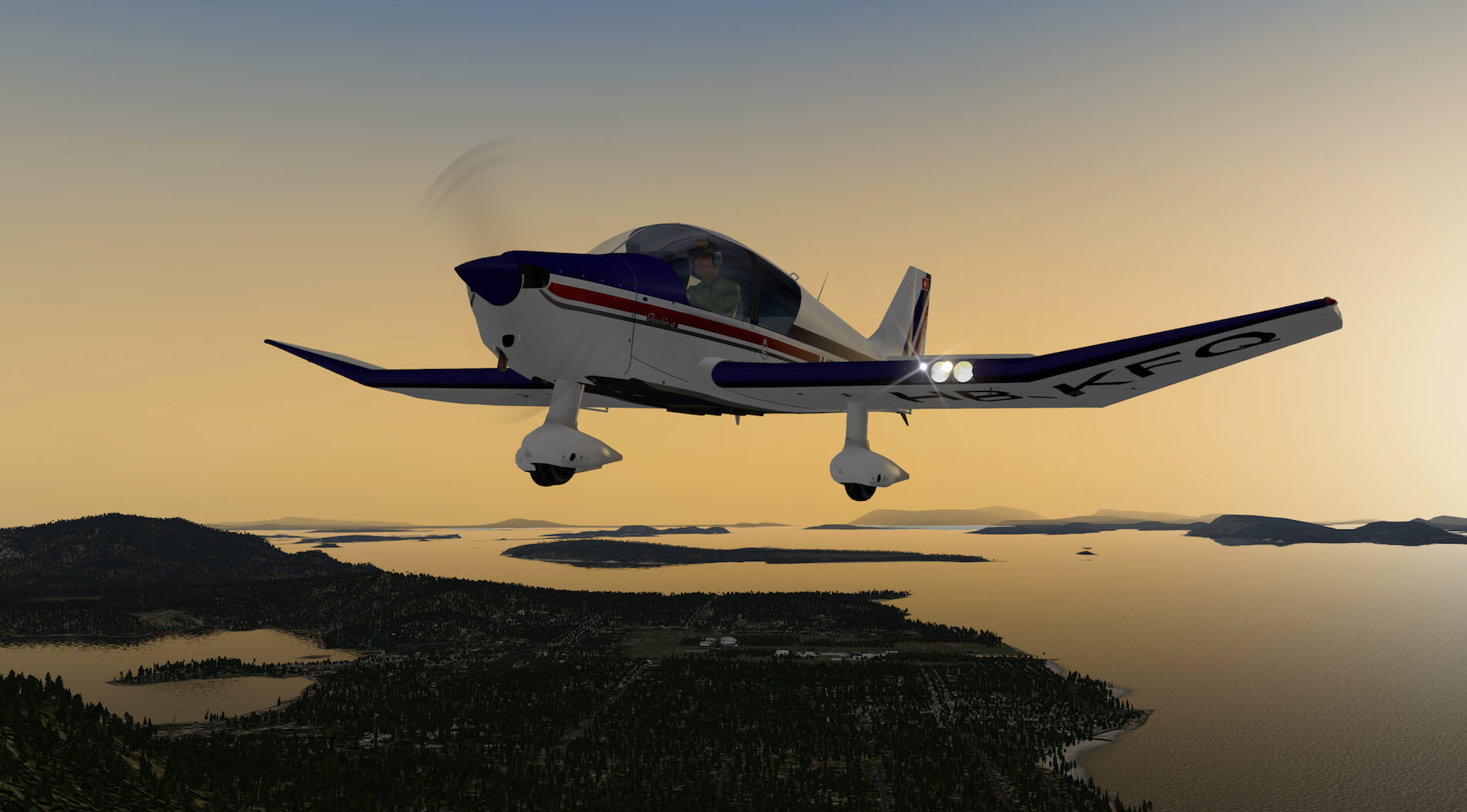 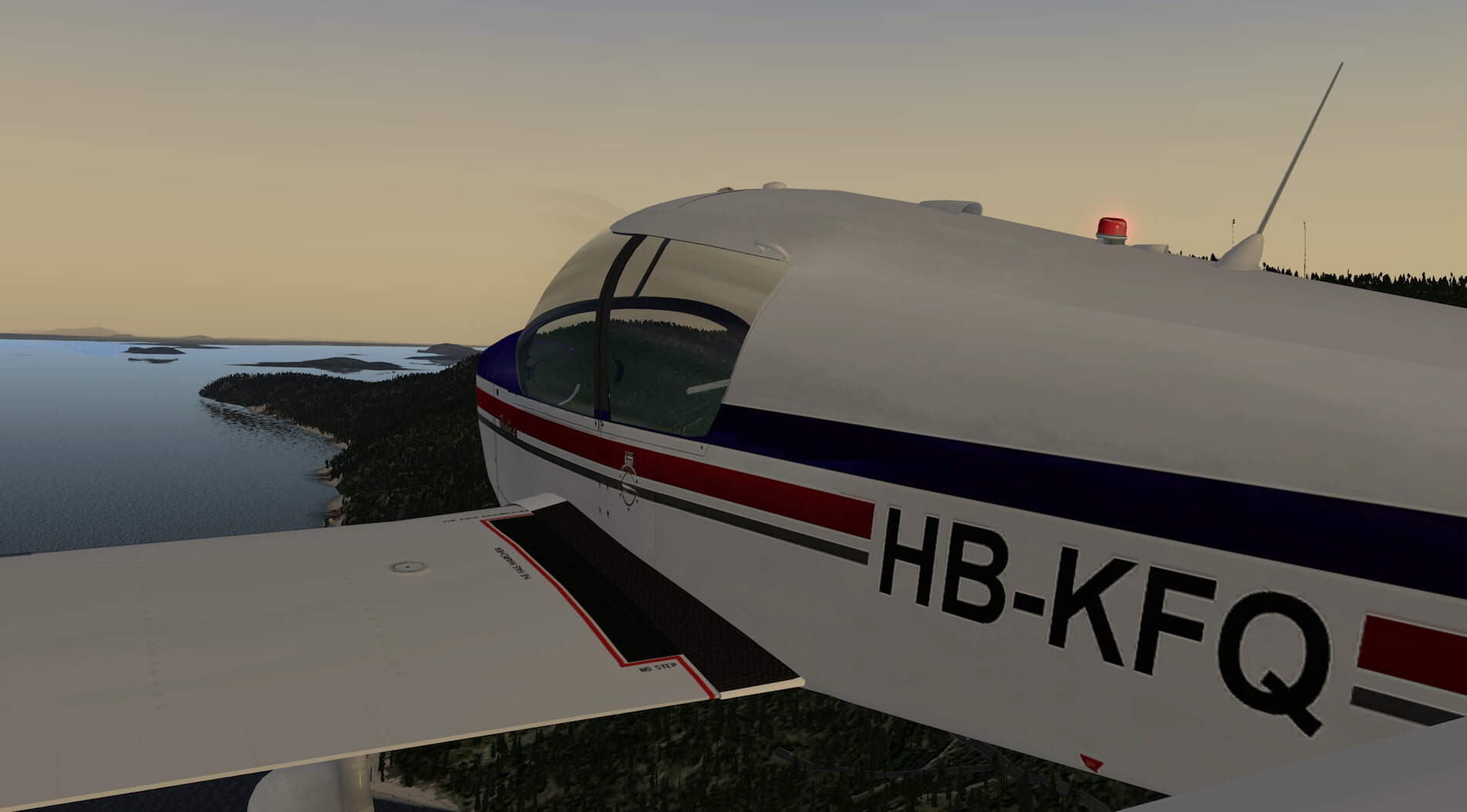 My test flight is only complete when I’ve tried to make a successful landing or at least finding out that the Robin is easy to control at low speeds with full flaps and landing gear down … oops, the landing gear is always supposed to be down!
The XPFR Robin DR400 is, under these approach and landing conditions, an easy aircraft to control, to fly, and no unexpected movements are to be expected. With this is mind, you and I are able to make a successful landing on a relatively small and short runway.

Have fun! I had a lot of fun with this French made model.