Welcome to Manchester! This long-awaited scenery is here at last and is it needed? Well, Let’s take a look and find out.
Aerosoft Manchester is here to fill a gap in a professional-level scenery that was needed as part of the UK. (Emma Bentley’s Freeware is excellent given the resources, and it’s definitely worth investigating). First, a small bit of history, (more can be found on Wikipedia).
Manchester Airport opened in 1937 and started off as Ringway airport, then RAF Ringway, which was the site for Fairey Aviation, and Avro also used this site for the manufacture and testing of their aircraft.

Manchester EGCC is a category 10 airport with a 3048 m runway, (10,000 ft) which means it can easily handle the Airbus A380. It’s one of the most important airports in the UK outside of the Greater London region, and the 3rd busiest in the UK behind London Heathrow and London Gatwick, with nearly 23 million passengers in 2014. The airport (and scenery) comprises of two parallel runways of and 3 passenger terminals.

All 3 passenger terminals are very different and distinctive in their own ways. Terminal 1 for operators Aer Lingus, easyJet, Jet2.com, Lufthansa, and SAS, which was opened in 1962, at a cost of £2.7 Million. It is the largest of the three terminals, has an area of about 100,000 m2, has 29 stands and has a dedicated gate 12 for the A380 for the flight from Dubai to Manchester.
Terminal 1 can currently accommodate up to 11 million passengers a year. There is a skyway bridge which allows passengers to transfer to terminal 2.

Terminal 2, which has an area of about 50,000 m2, opened in 1993 and services the following airlines, Monarch, Delta, US Airways, US Airways, and Virgin Atlantic. It has 20 gates, can handle about 8 million passengers per year and is due for expansion in the coming years which will include a new connecting hallway allowing passengers to transfer directly to terminal 3.

Terminal 3 opened in 1989 by Diana Prince of Wales, services British Airways, American Airlines, Ryanair, KLM, Flybe and Air France. Terminal 3 is also used for Domestic flights.
It is the smallest of the passenger terminals at 44,000 m2, and a planned expansion to have direct access to terminal 2 when the proposed 10 year airport expansion project is started.

The World Fright terminal opened in 1986, directly across from terminal 2.In June 2013.
It covers 60,000 m2 of warehouse and office space, covers the following handling companies, Dnata, Servisair Cargo, Swissport Cargo, and WFS. It provides 24/7 cover, can handle multiple aircraft simultaneously and can facilitate more than 100,000 tonnes of freight each year, and has about 100 different service provides to handle such freight.

One of the criteria I look for in an addon airport scenery is well, how many routes and destinations
does it have in real-life and more important, how many routes can I fly to with my already existing
addons. I like to build on my existing network of addons, so airports that don’t have that many routes to other airports are not a priority for me. In this case, Manchester Airport ticks all the boxes and more, especially since my home airport EIDW (Dublin) is close by, and within easily flying distance if I don’t have much time.

Installation is familiar to anyone who’s used an Aerosoft X-Plane product, although not quite the same as other vendors The Aerosoft scenery comes with its own setup installer with its built in Java engine.

For anyone not familiar with how addons for X-Plane are installed, the process is as follows.
The downloaded files are first extracted and the exe is run with the installation usually pointed to the root X-Plane folder.

In my case, my X-Plane location was D:\X-Plane 10 location, so I pointed the location of the application to the specific location and the installation continued. Once installed, it creates two new entries in the X-Plane 10\Custom Scenery folder EGCC Manchester Airport and EGCC Manchester Mesh

In the scenery.ini text file in the custom folder, just validate that the entries have been created in the correct order. For the scenery to display correctly, it should read:

If you have any 3rd party Manchester sceneries, be sure to disable these by changing
SCENERY_PACK to
SCENERY_PACK_DISABLED XXX_Scenery, otherwise you may get scenery conflicts.

Be sure to refer to the documentation as there are some important points that are unique to this software.

The Manchester scenery has a special “Static Airplanes” plugin which requires Python to be installed. For this to work, be sure to copy the Python file “PI_ManchesterAirport” from the Custom Scenery\EGCC Manchester Airport\ to X-Plane\Resources\plugins\PythonScripts\ folder.
This allows a switch to be available in the X-Plane 10 menu to instantly enable/disable static aircraft on the fly. 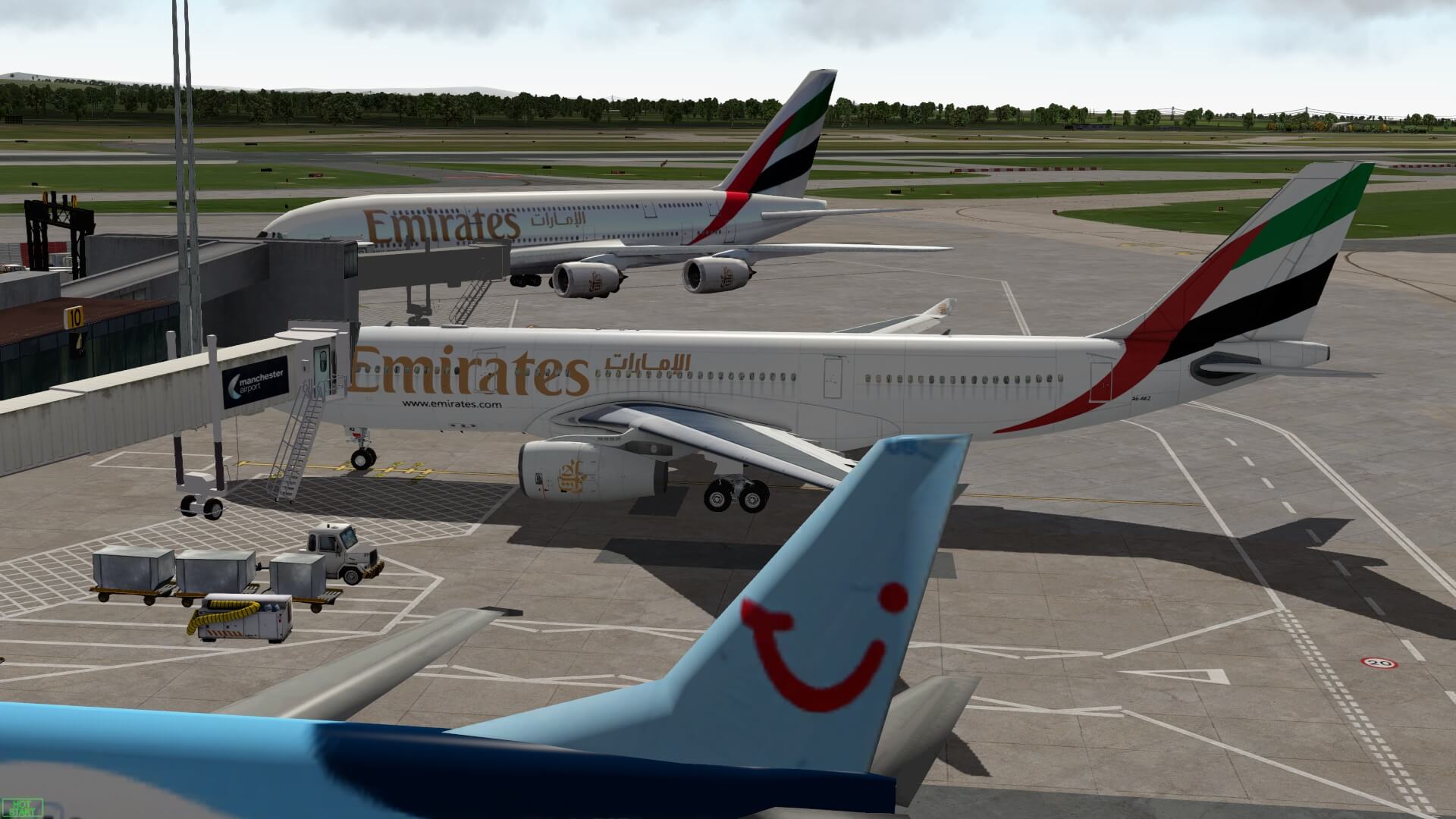 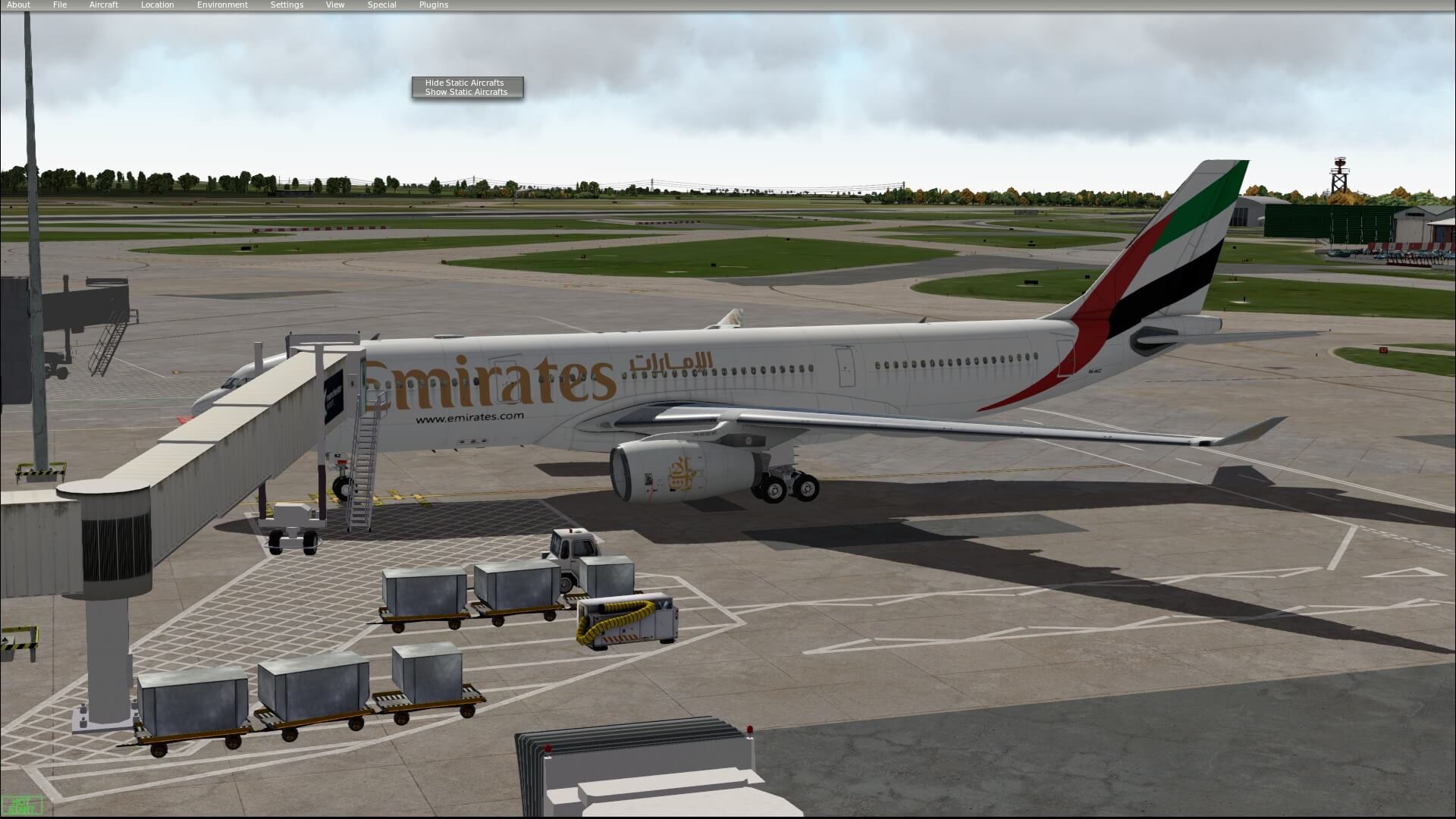 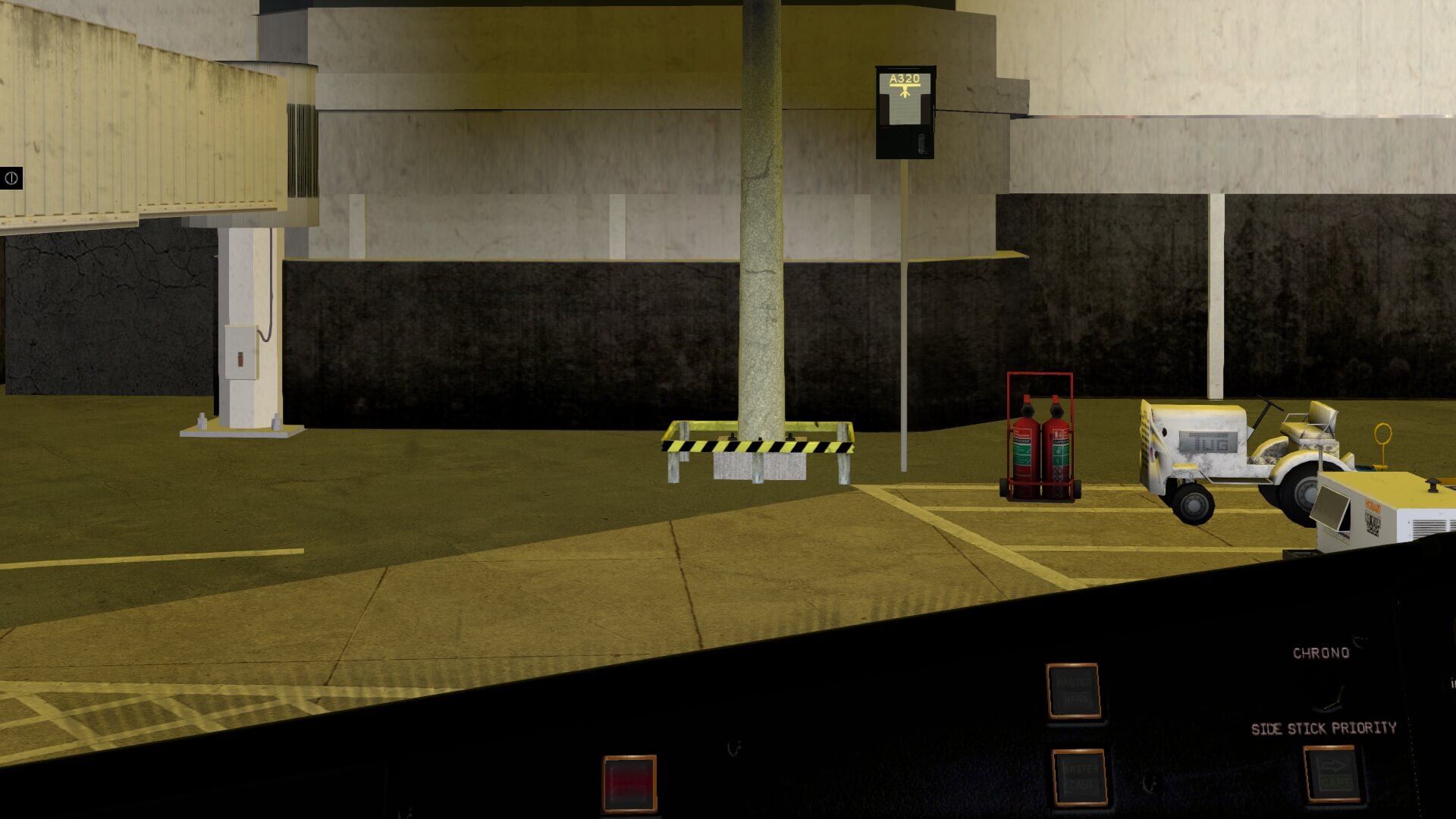 Also included, is the “Safegates” option first available in the Aerosoft London Heathrow.
This requires that you download the AutoGate Plug-in. Also included are the terminal gates, and charts for Manchester Airport including SIDS and STAR route information. Very handy!

This is a really well designed airport and a newcomer to the scenery front, makes it even more impressive. Features like the very prominent Monarch Maintenance Hangar and Ocean Sky hangar with aircraft towing animations, give the impression of a very busy and active airport. 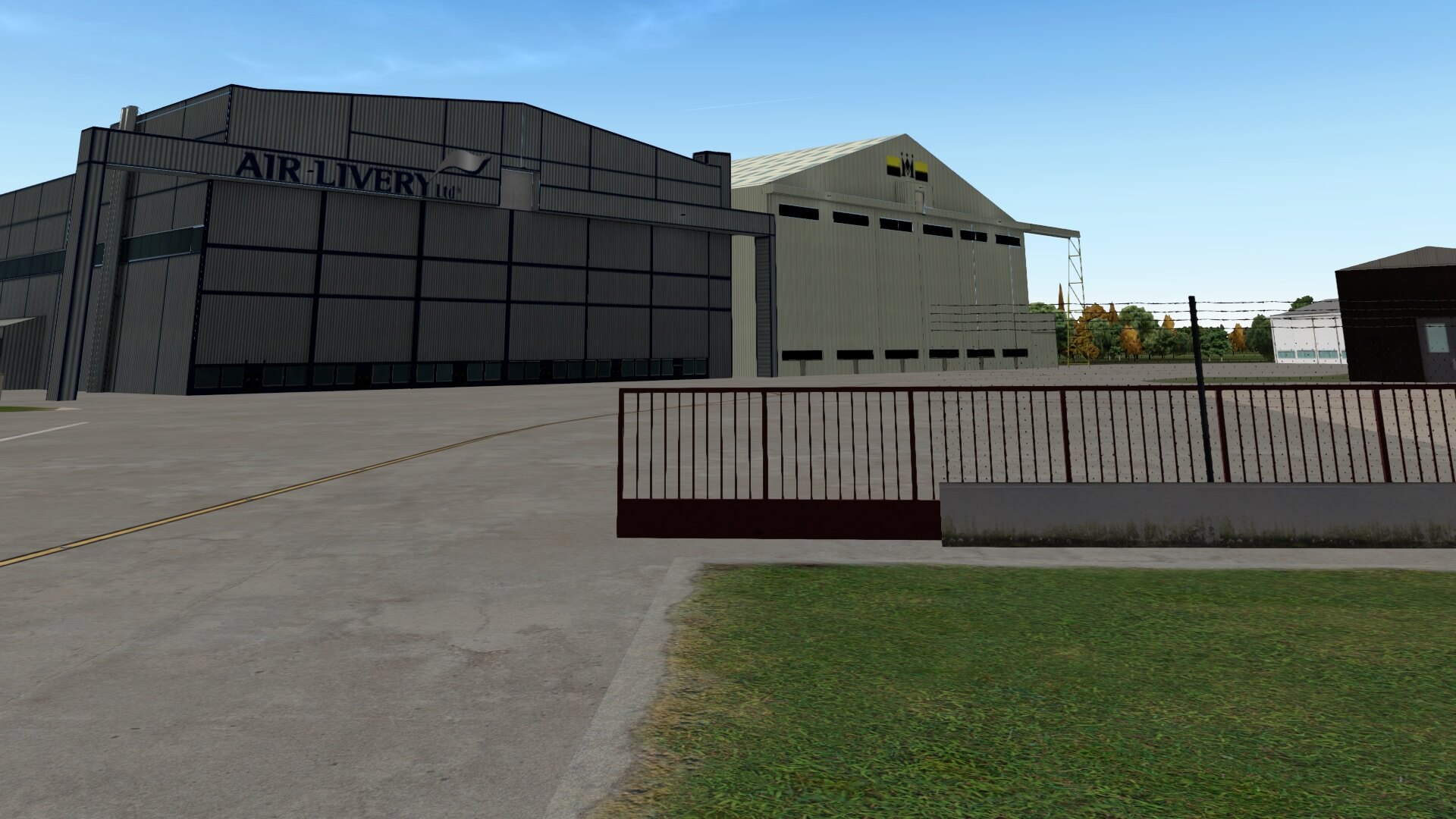 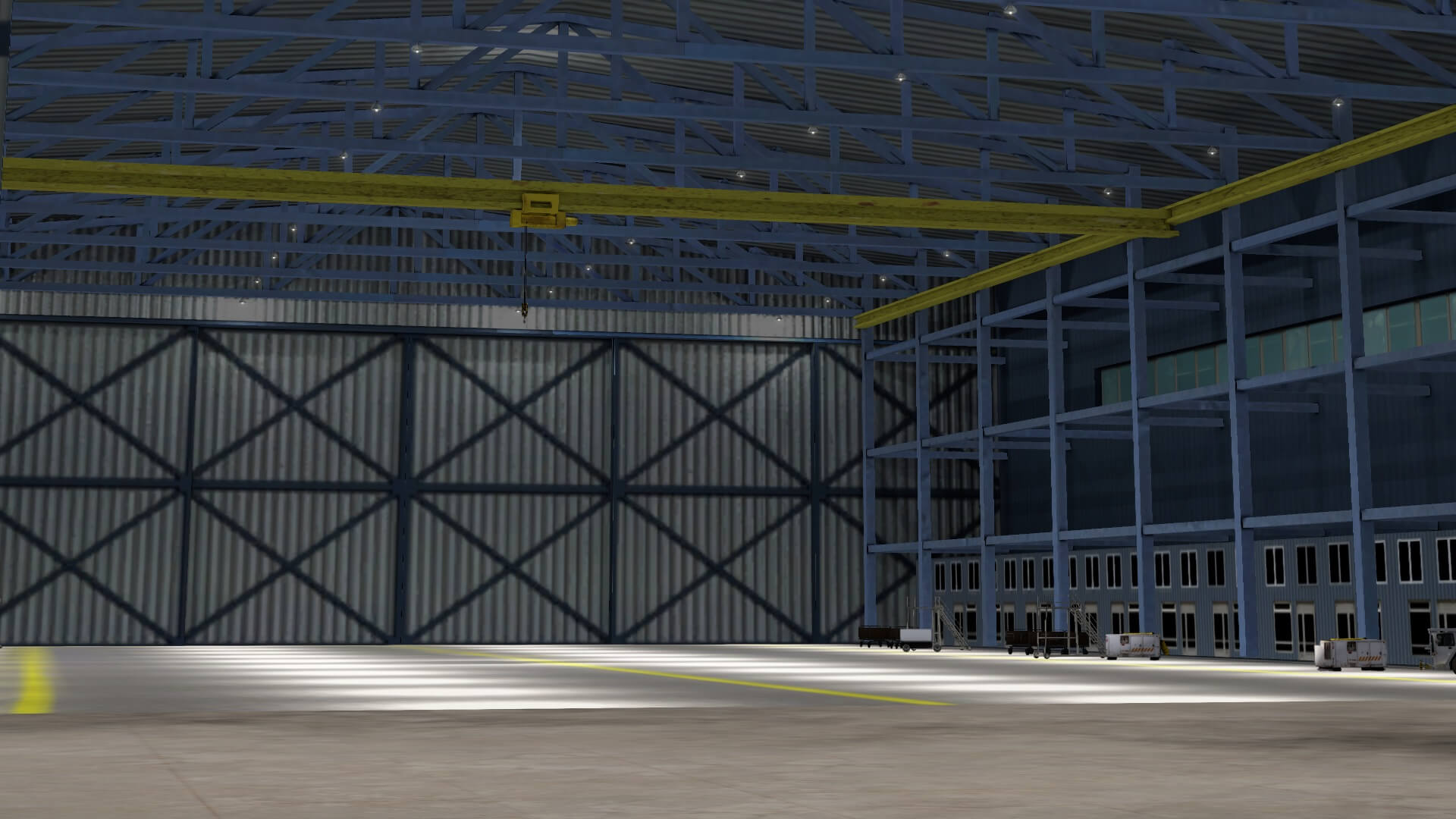 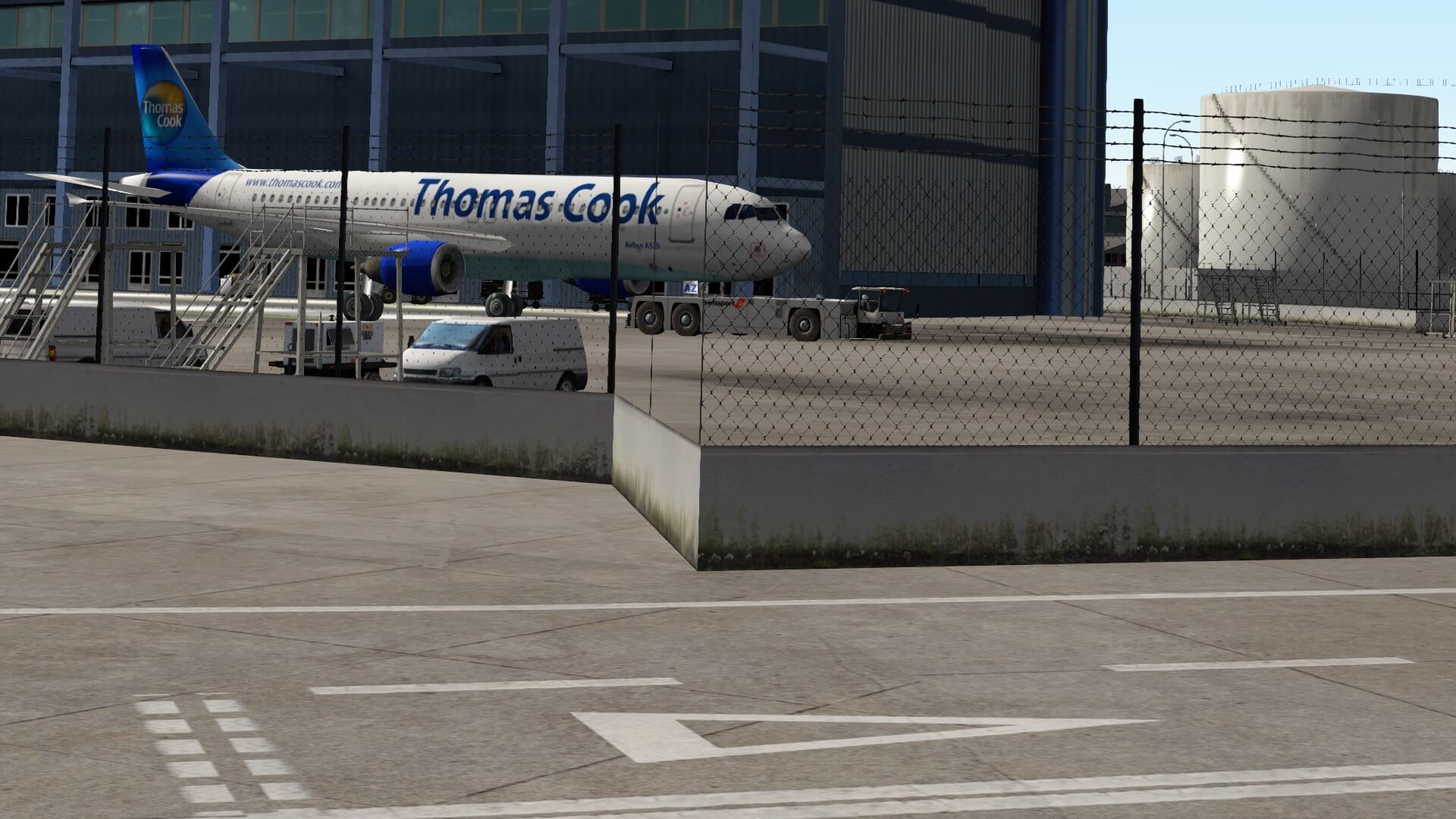 The other feature that stands out is the very prominent “I Love MCR” campaign logo in front of terminal 3. The Airport scenery blends in well with the surrounding terrain, which X-Plane seems to handle better than FSX native scenery. 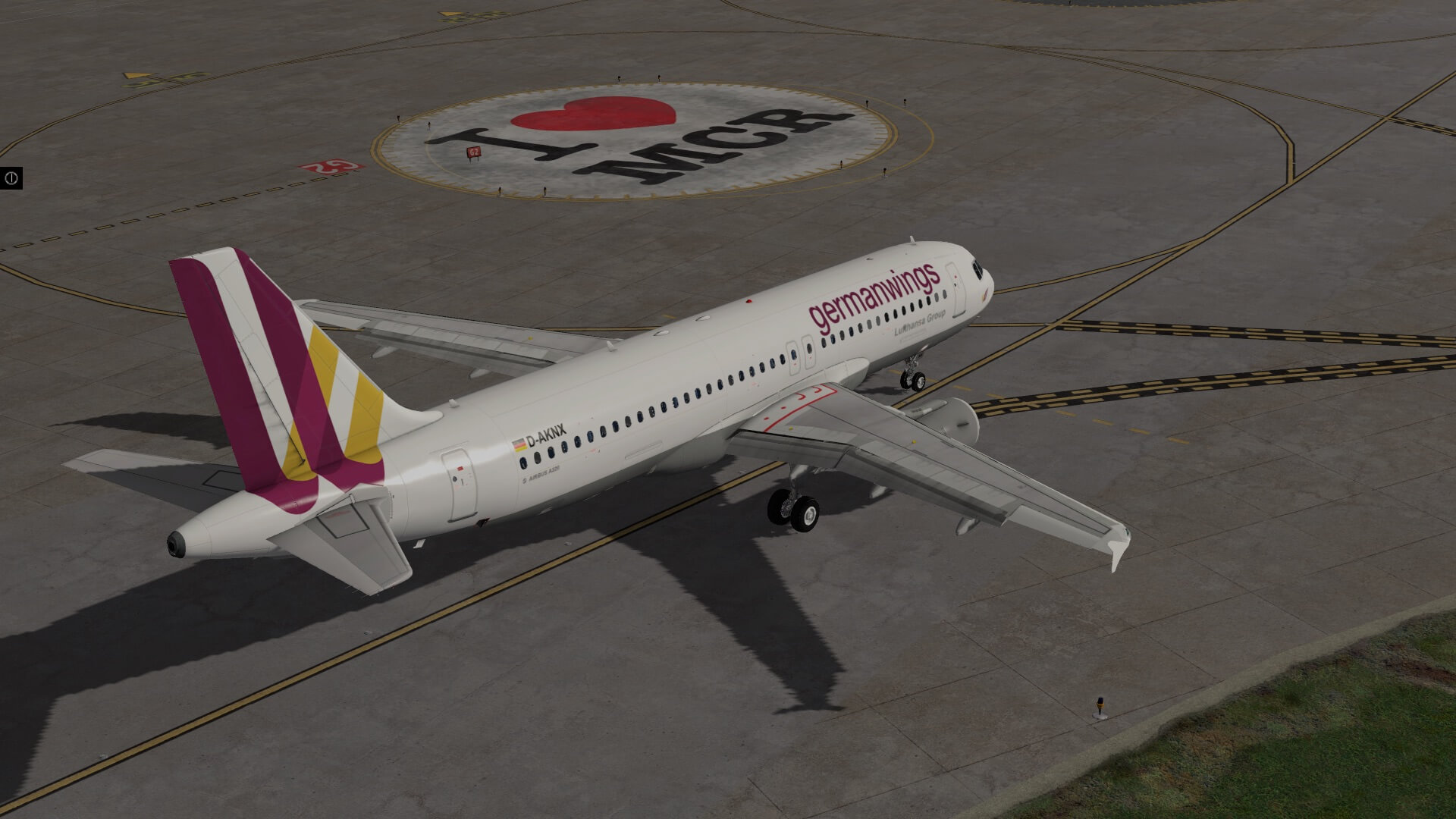 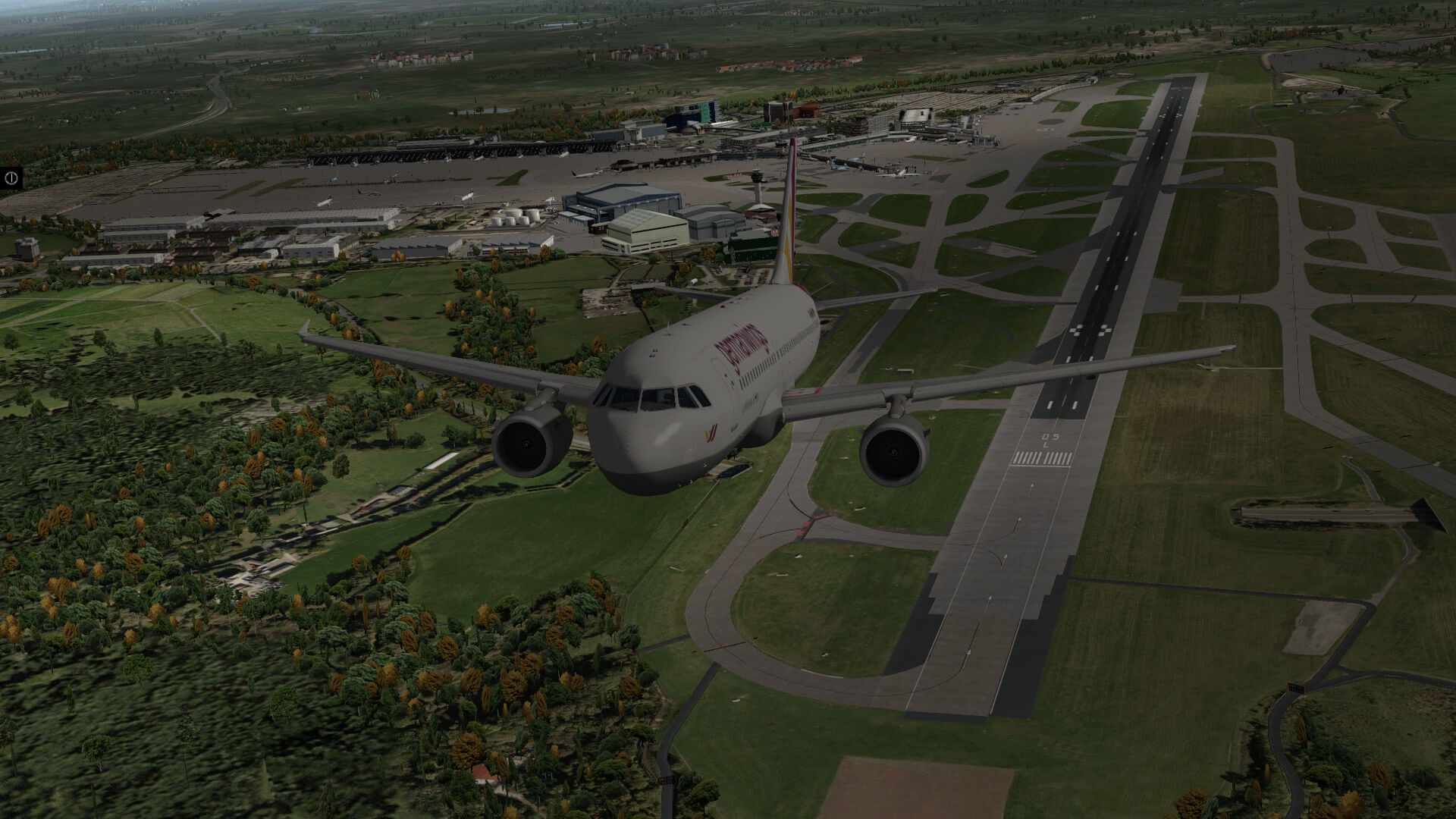 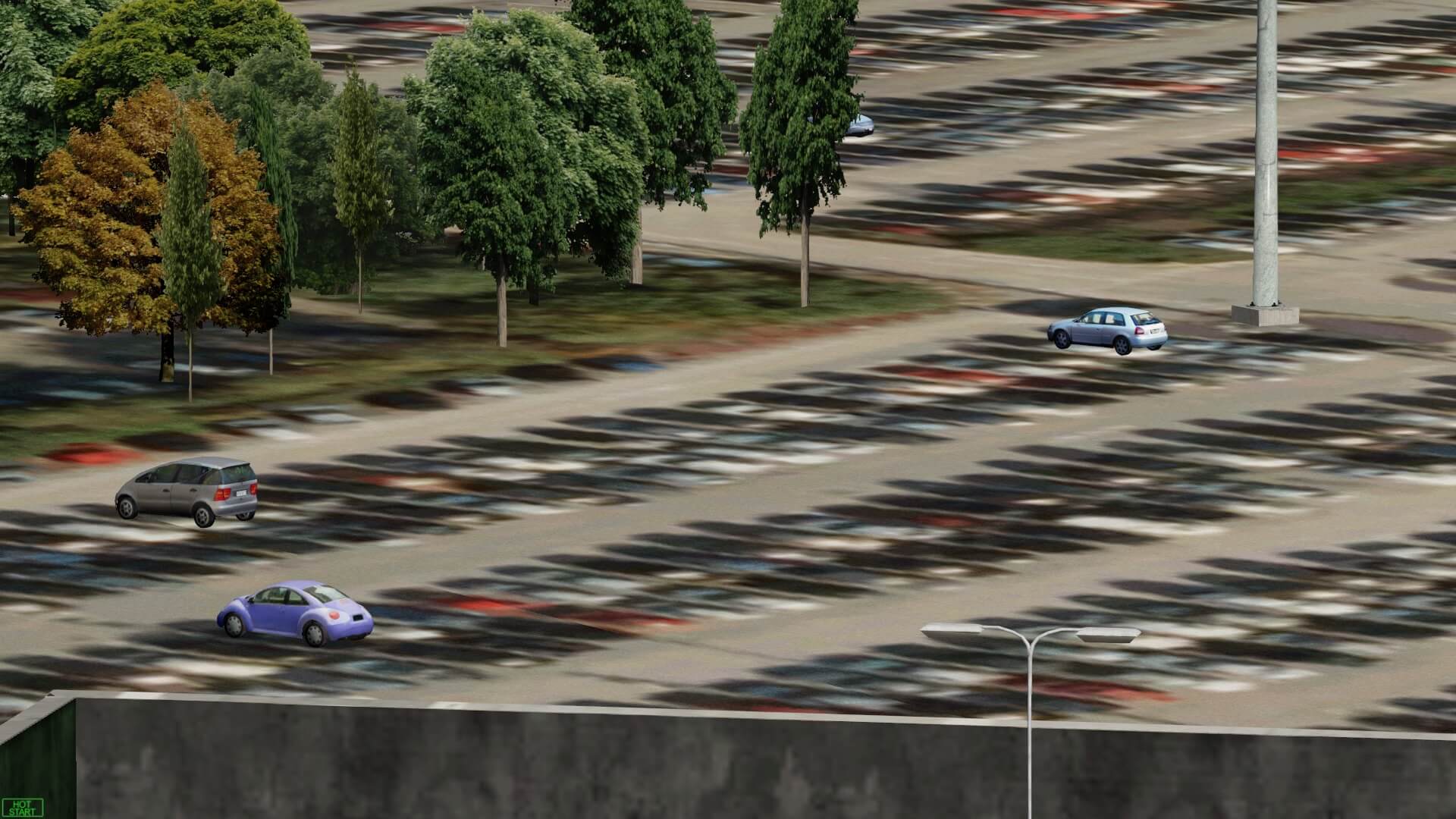 There are plenty of 3D cars in the airport car parks, and what I found interesting on this point was the fact that the lowering the scenery setting for car traffic density also lowered the number of 3D cars being displayed and replaced them with 2D representations instead.
I thought this was quite a clever use of X-Plane settings.

The three terminals are well represented here and quite distinctive from each other in style and structure and work well with the static aircraft. The taxiways and runways look very well and the famous “Airport Pub” is well represented here with its beer garden visible from runway 23R. You can almost smell the food. 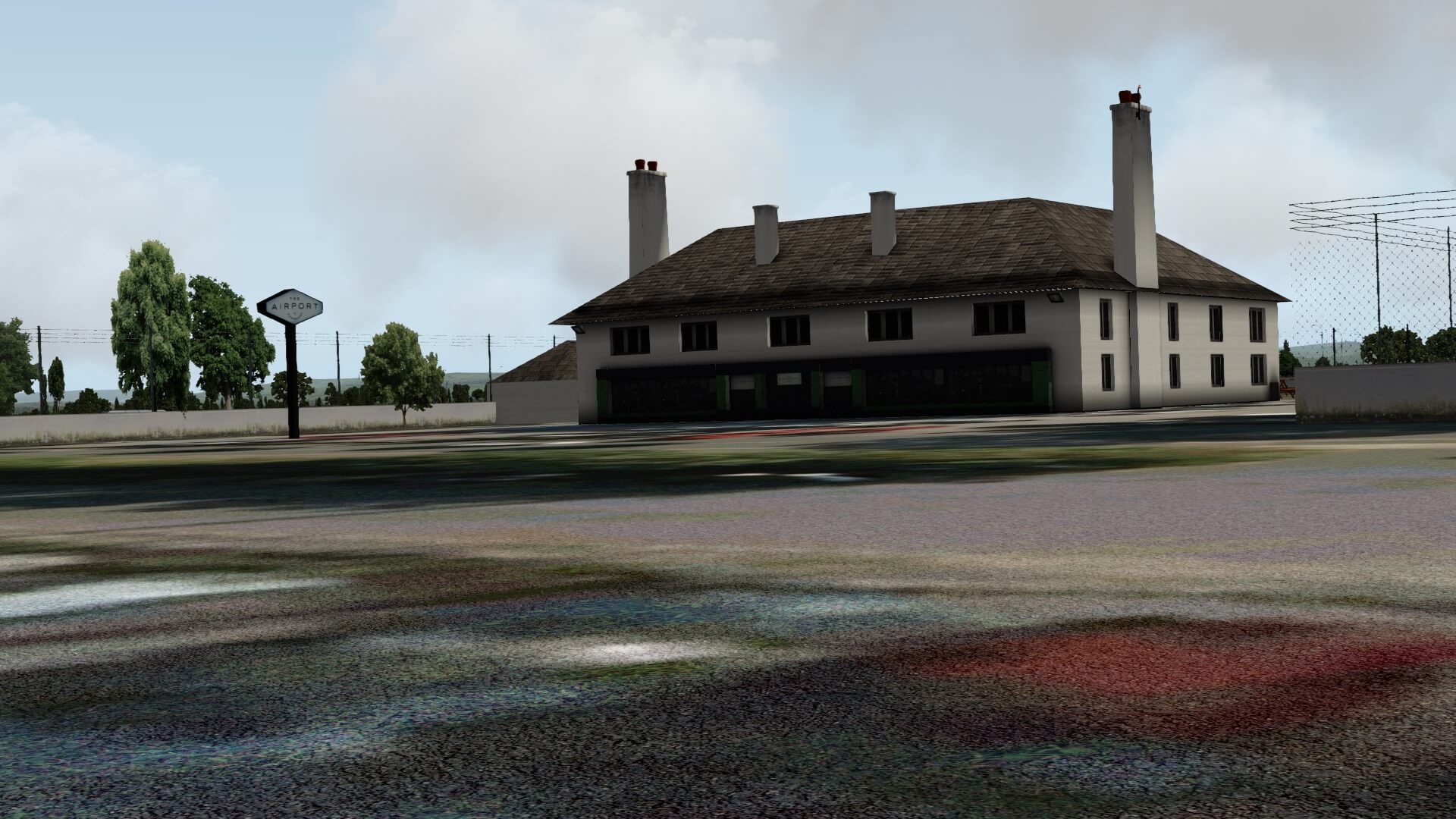 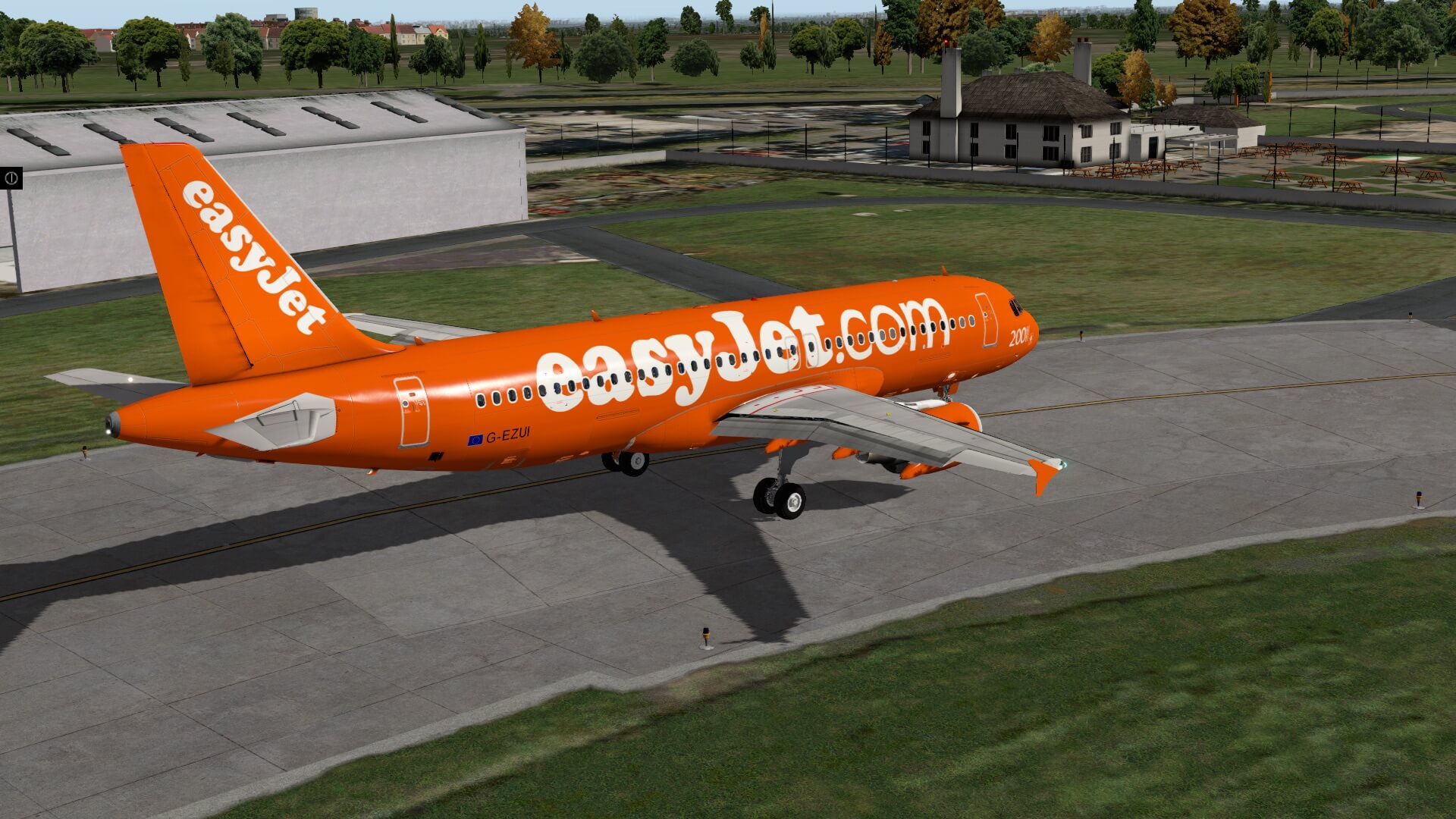 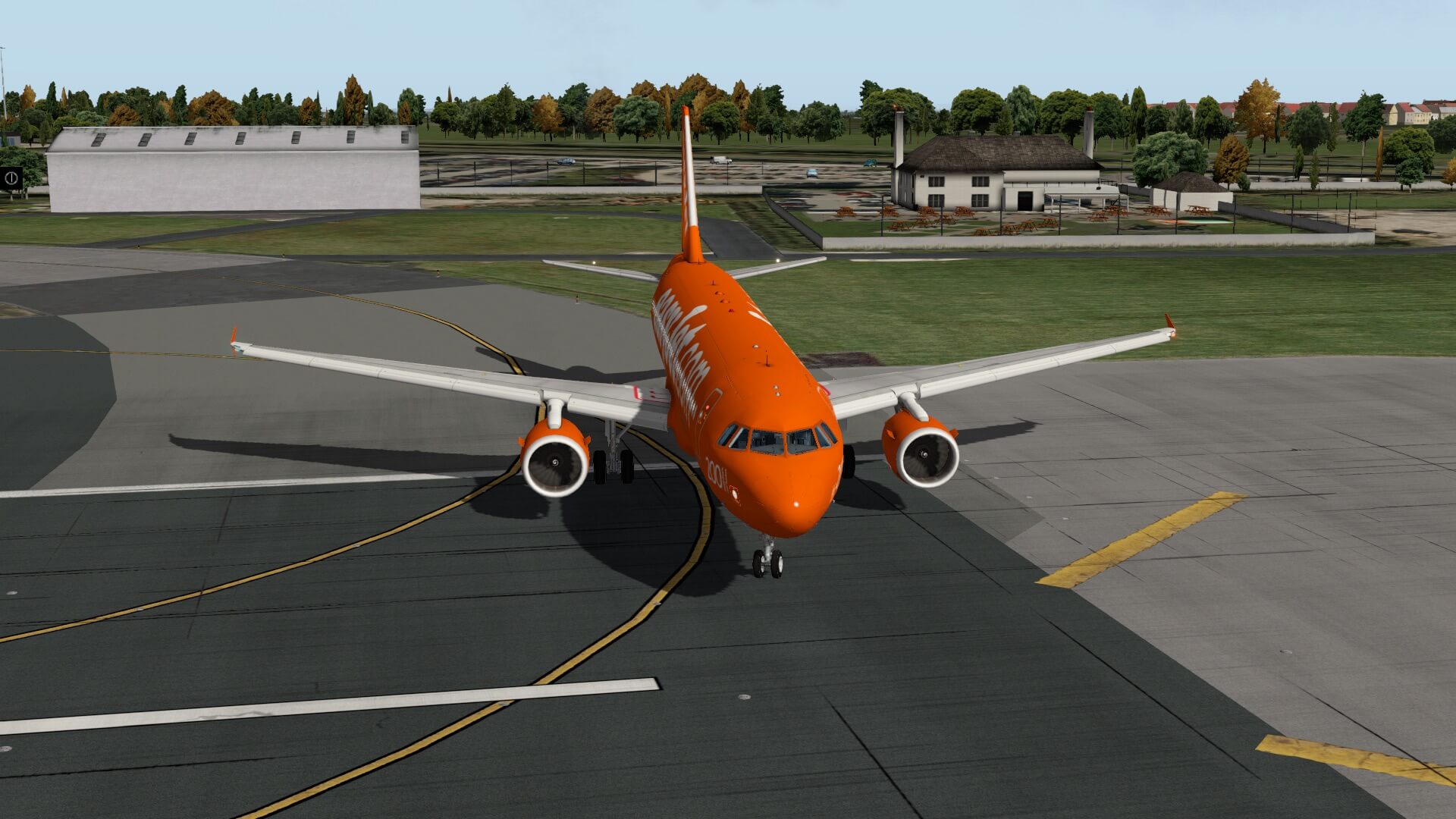 Nice touches such as rust marks on the old control tower, weathering on the terminal buildings, and the Aviation Viewing Park which includes such vintage aircraft as the complete B.E.A. HS 121 Trident, the front section of a Monarch DC10, and complete R.A.F Nimrod XV231 aircraft, along with the famous Concorde hangar which houses G-BOAC since 2004 add those little touches to this scenery that give it its special character, although the Trident aircraft doesn’t look quite right – the nose and tail are not quite correctly done -maybe this will not be too noticeable to anyone except Trident fans, but it would be nice to get right, and the Nimrod does seem to be the wrong colour, from actual photos on the it looks a light brown rather than the olive green seen here.

See this link – but these are just small issues, which don’t really take away from the scenery as a whole. 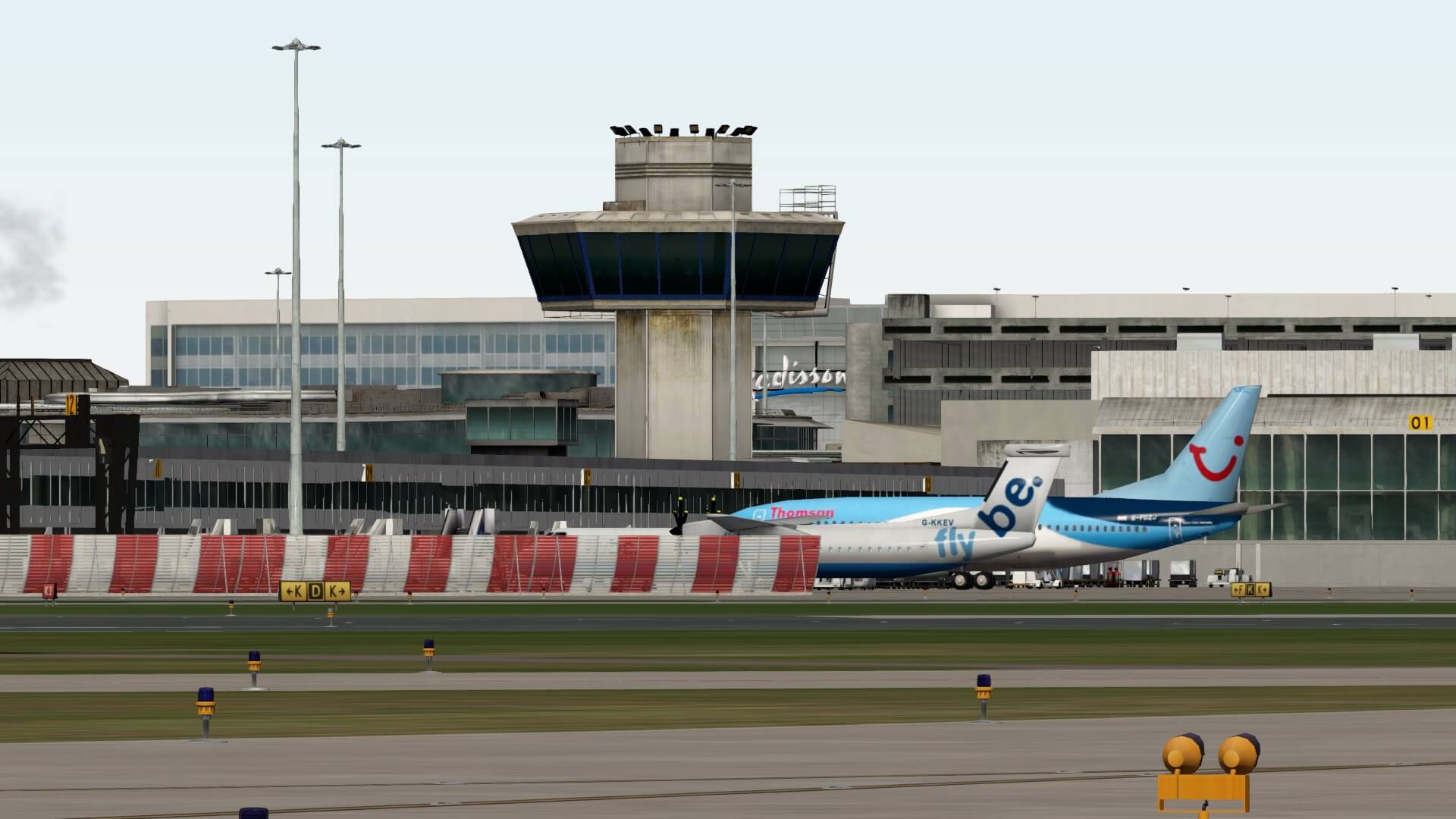 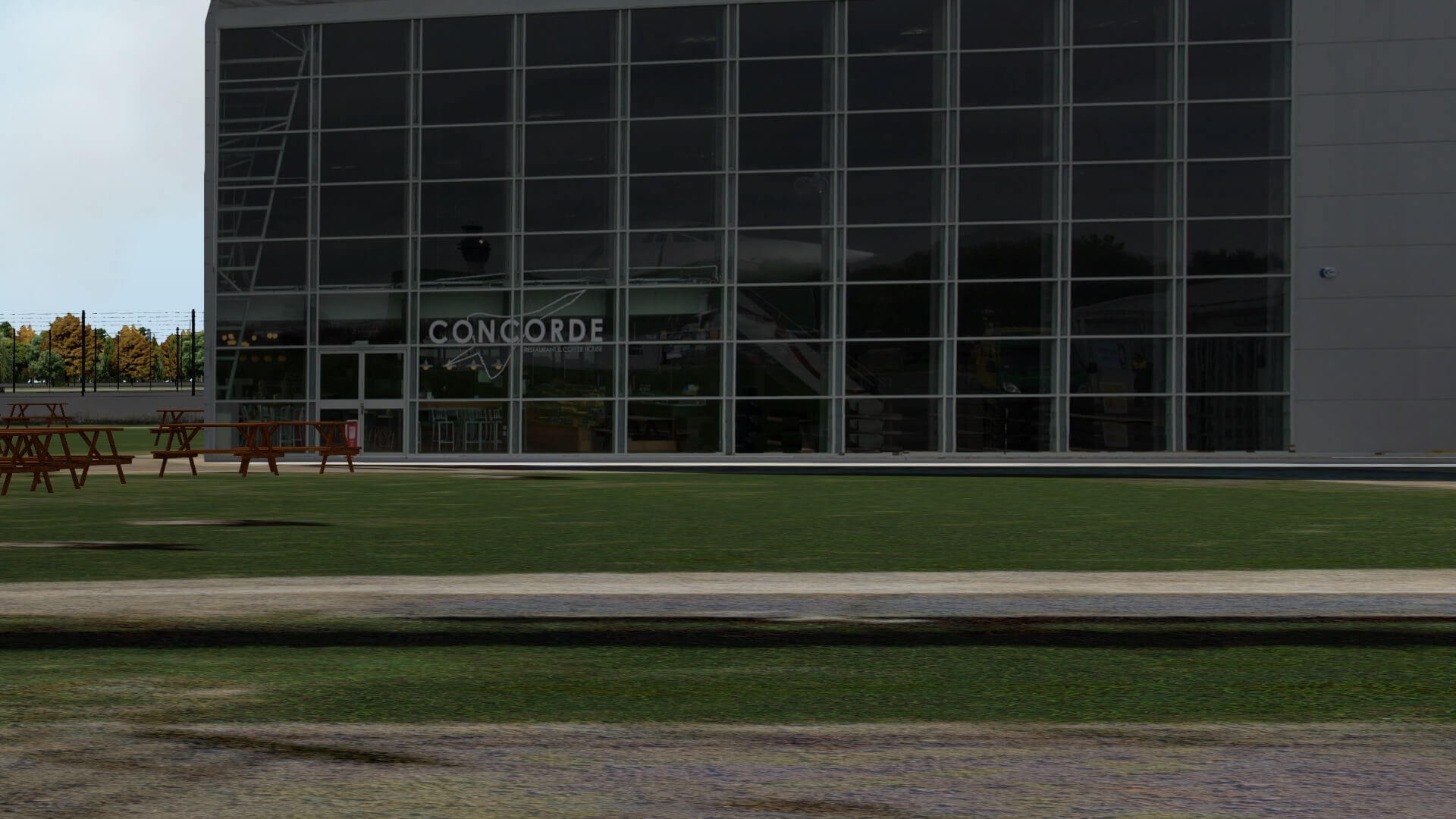 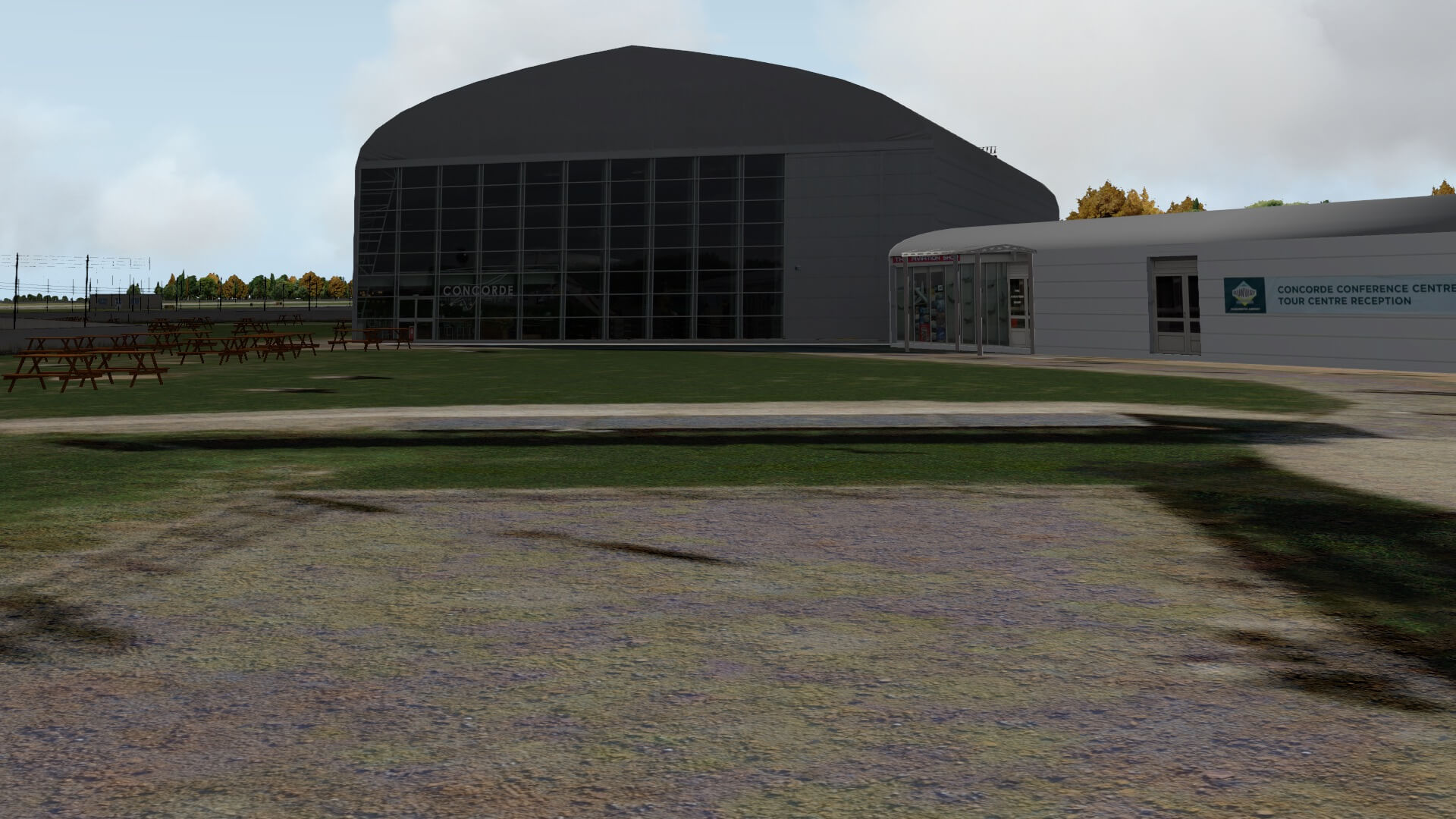 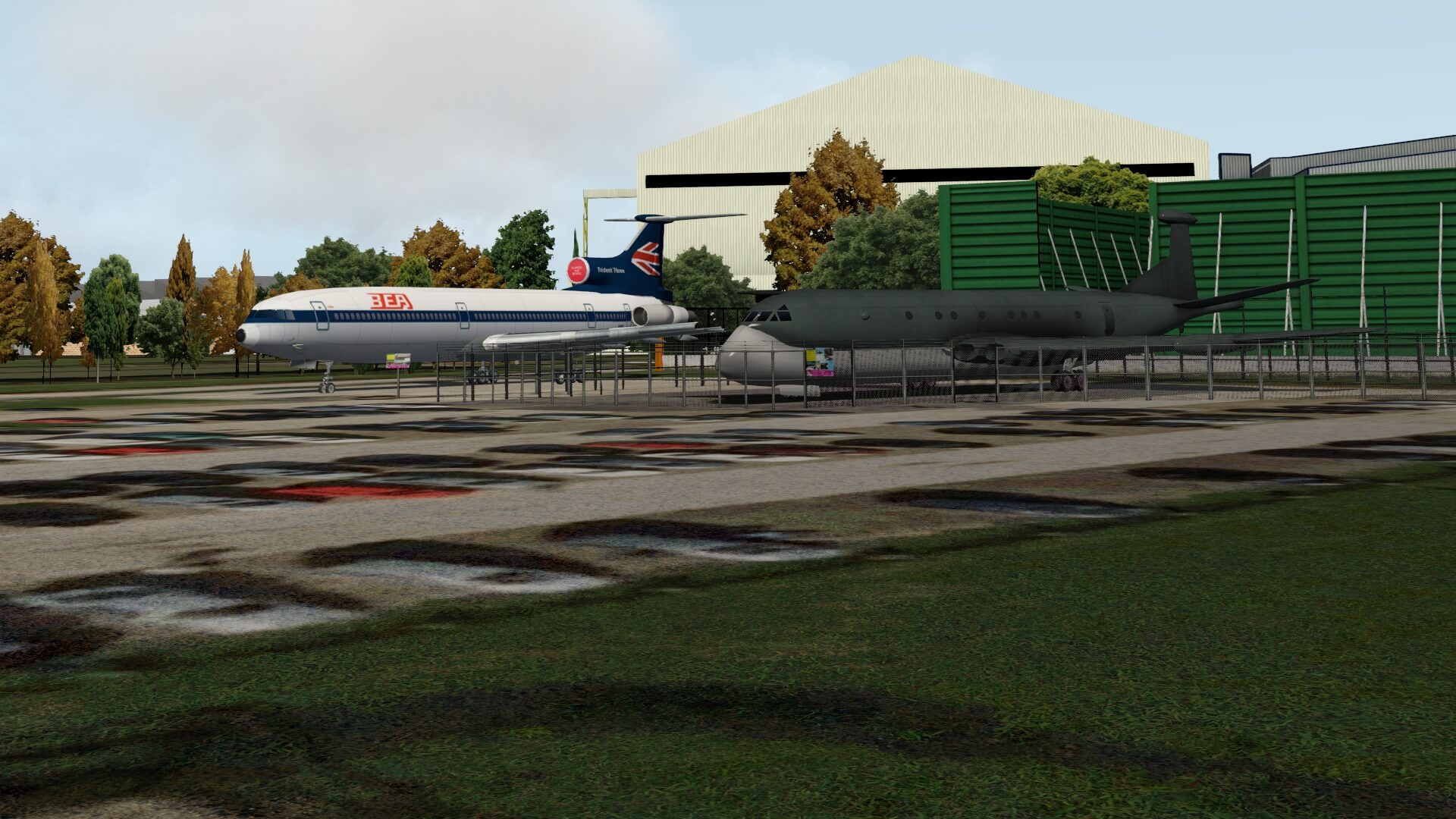 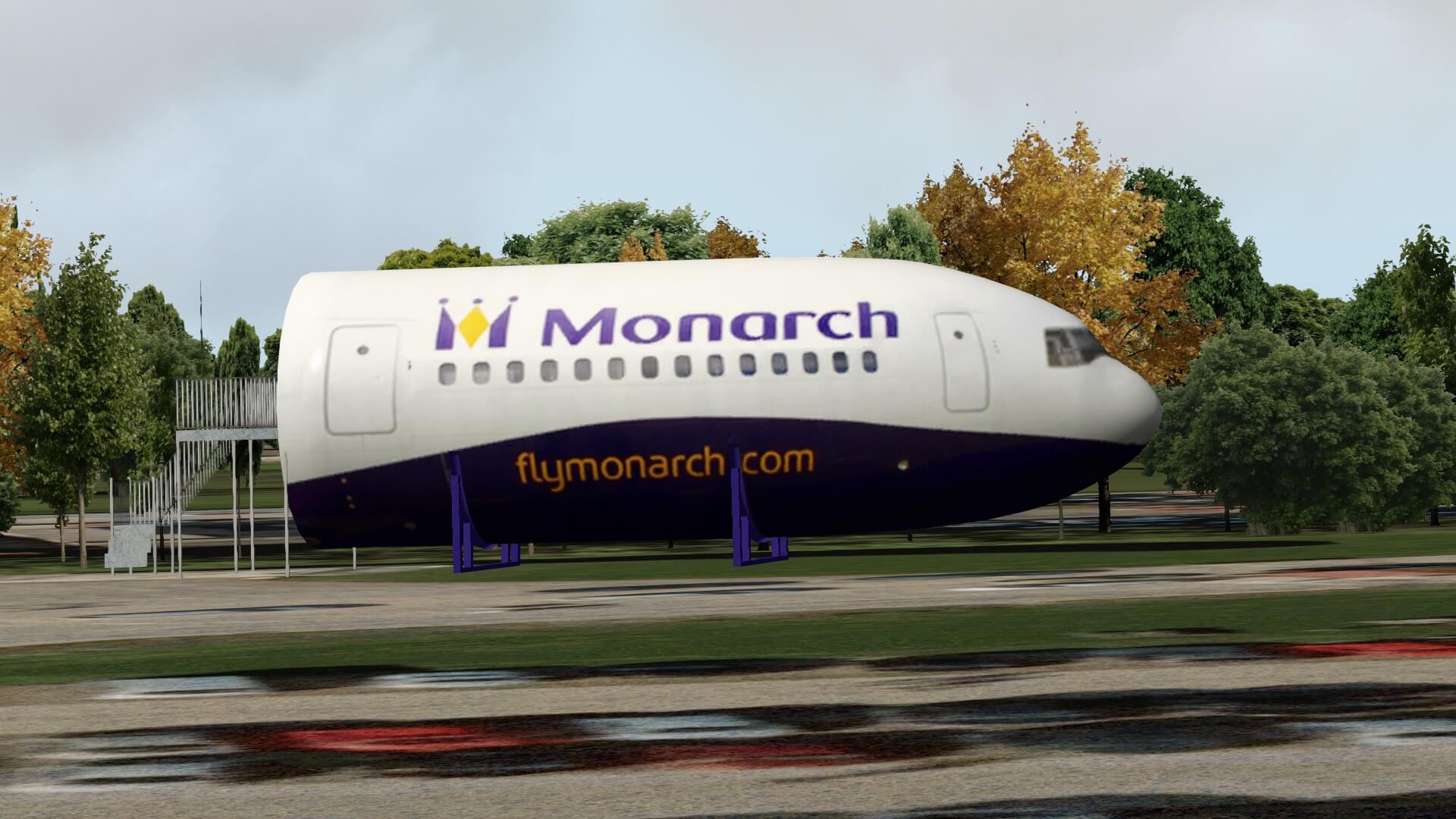 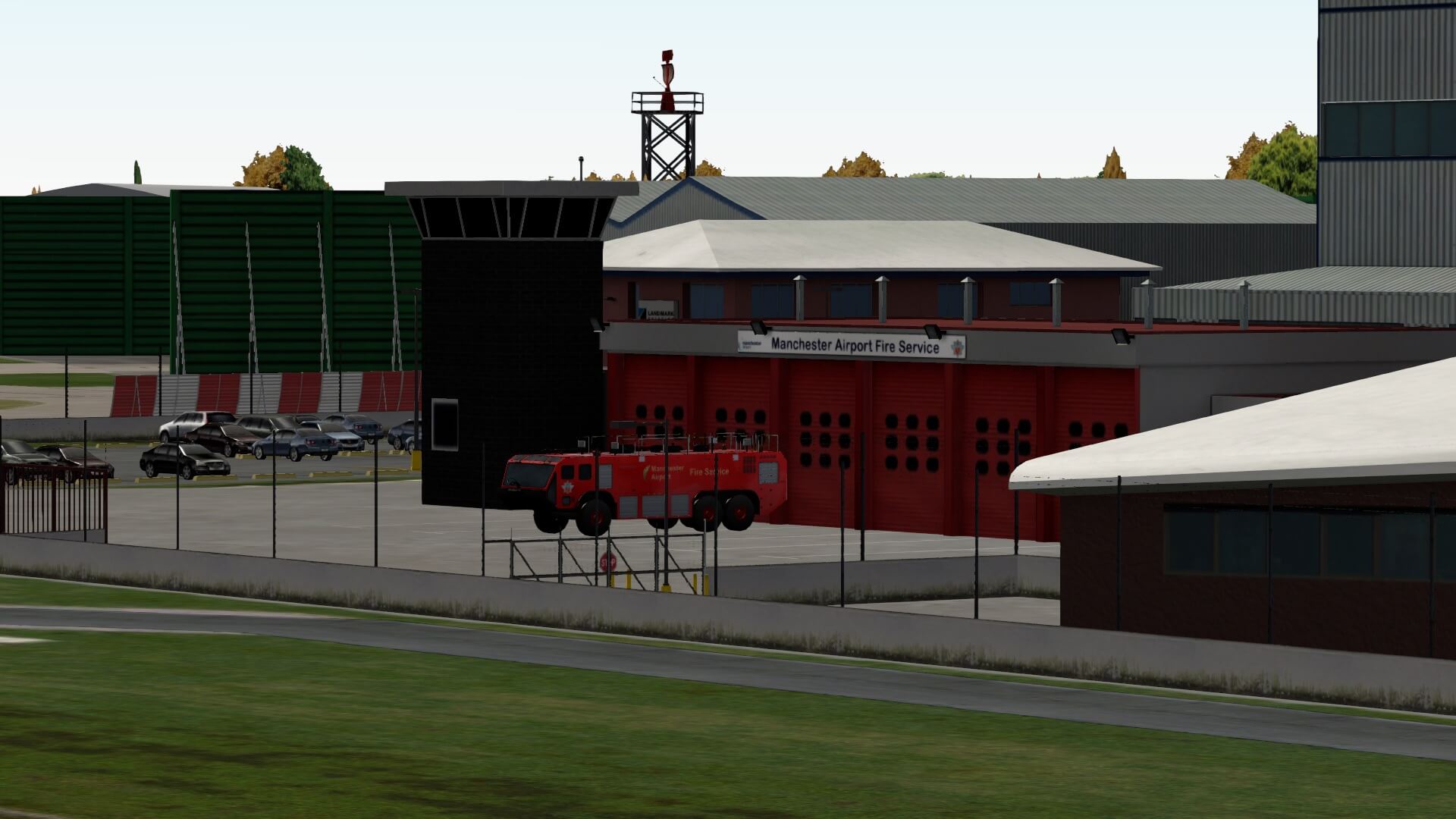 The Fire Station and the aircraft simulator for practice, also add a nice level of realism, as do the rusty ground APU units. The taxiways are well defined and easily followed, and ground markings and lights are excellent quality and texture. The animated radar also adds a nice touch that I feel is missing in Heathrow, as does the smoke animation present. The Safedock system is a really nice touch here as you can see from the screenshots, it helps line up the aircraft to the gate quite nicely indeed. 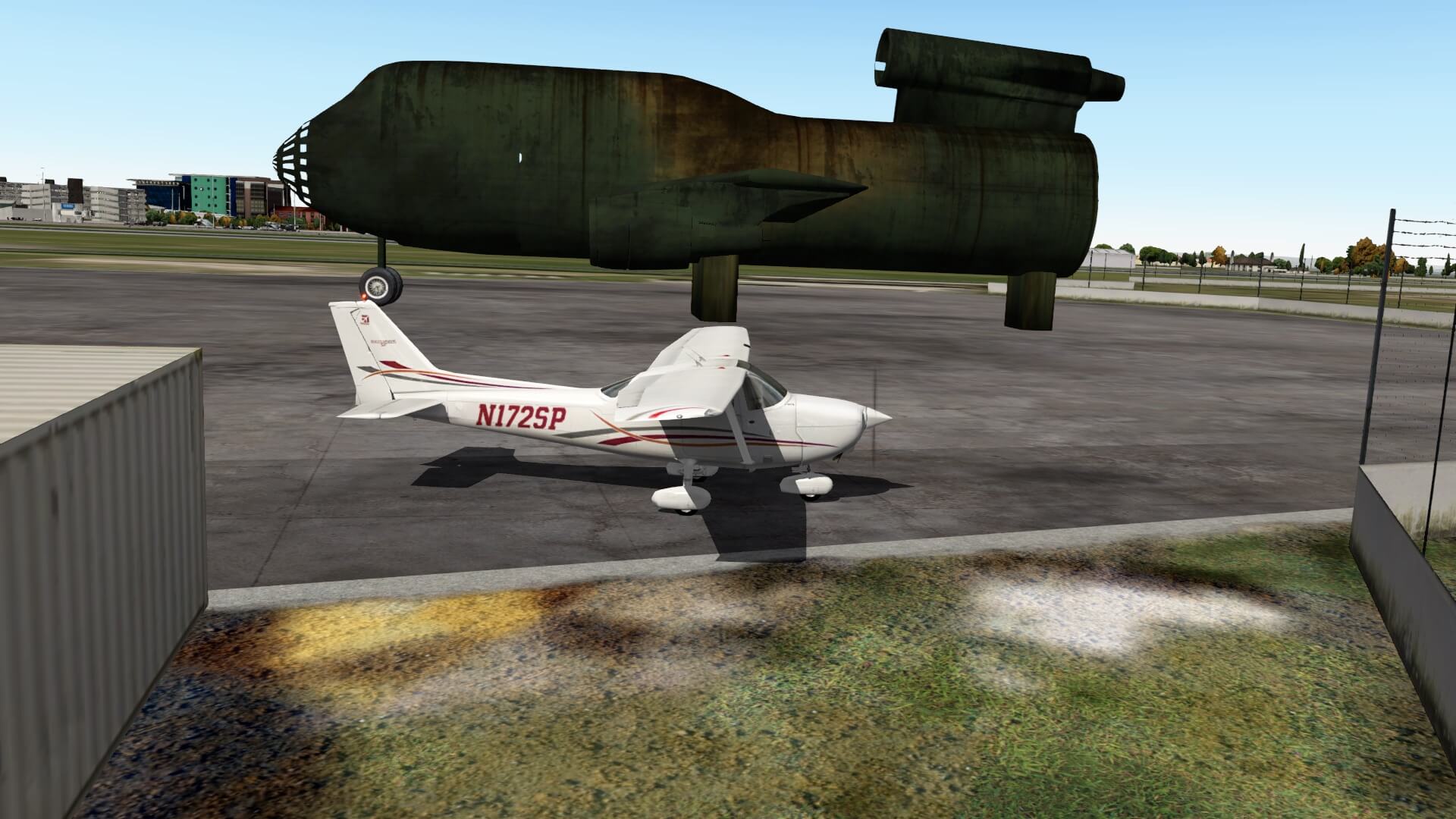 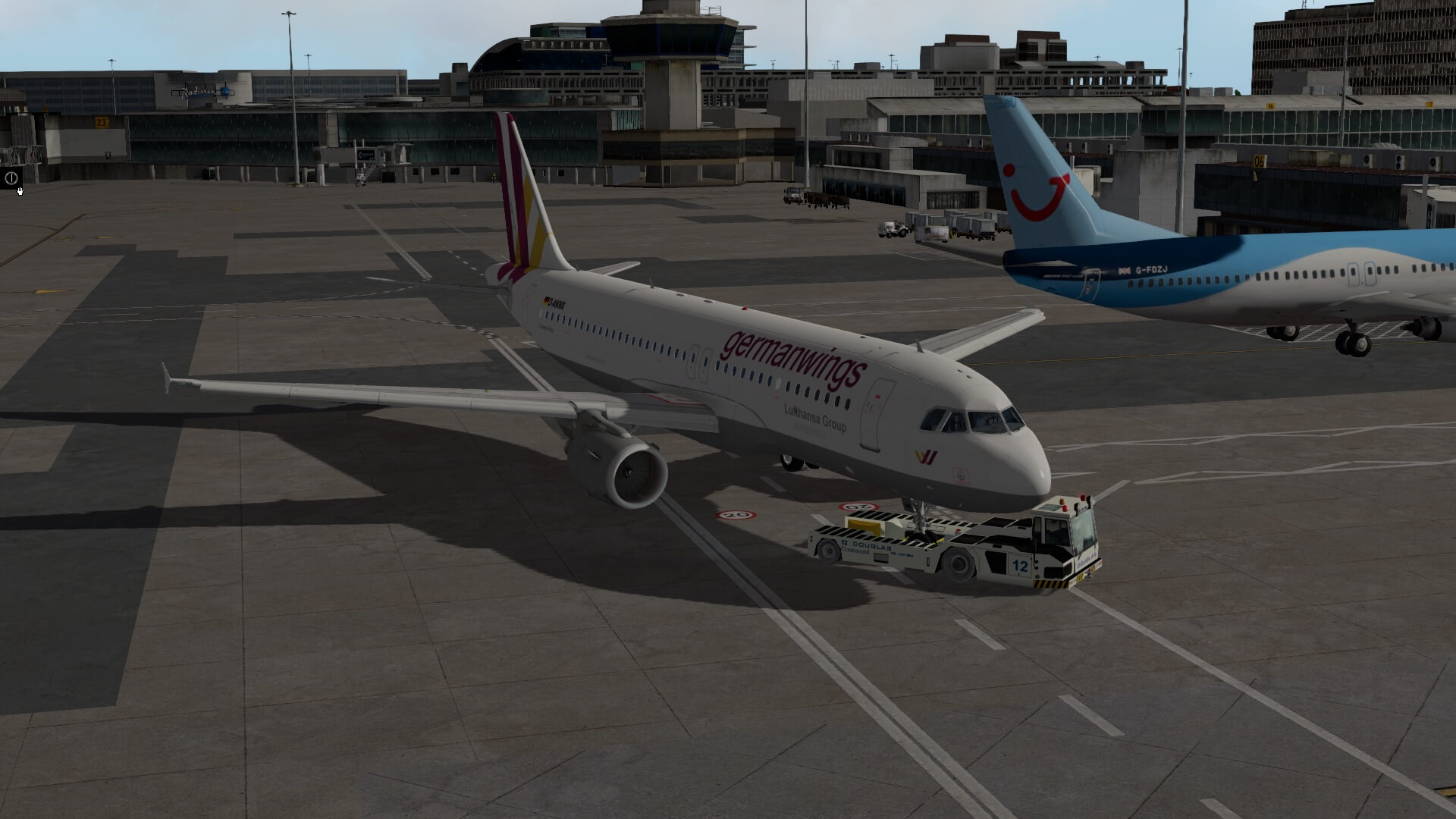 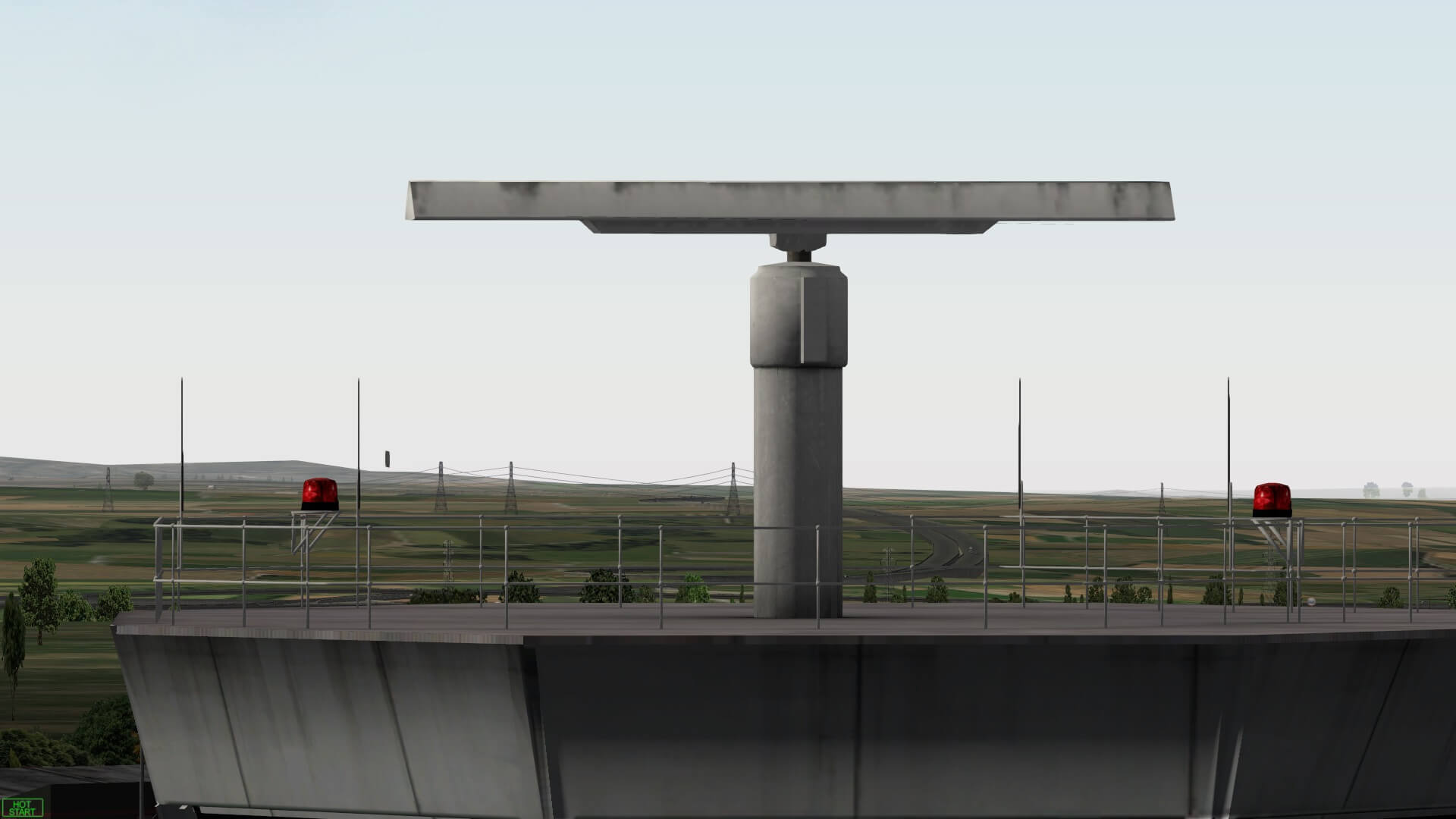 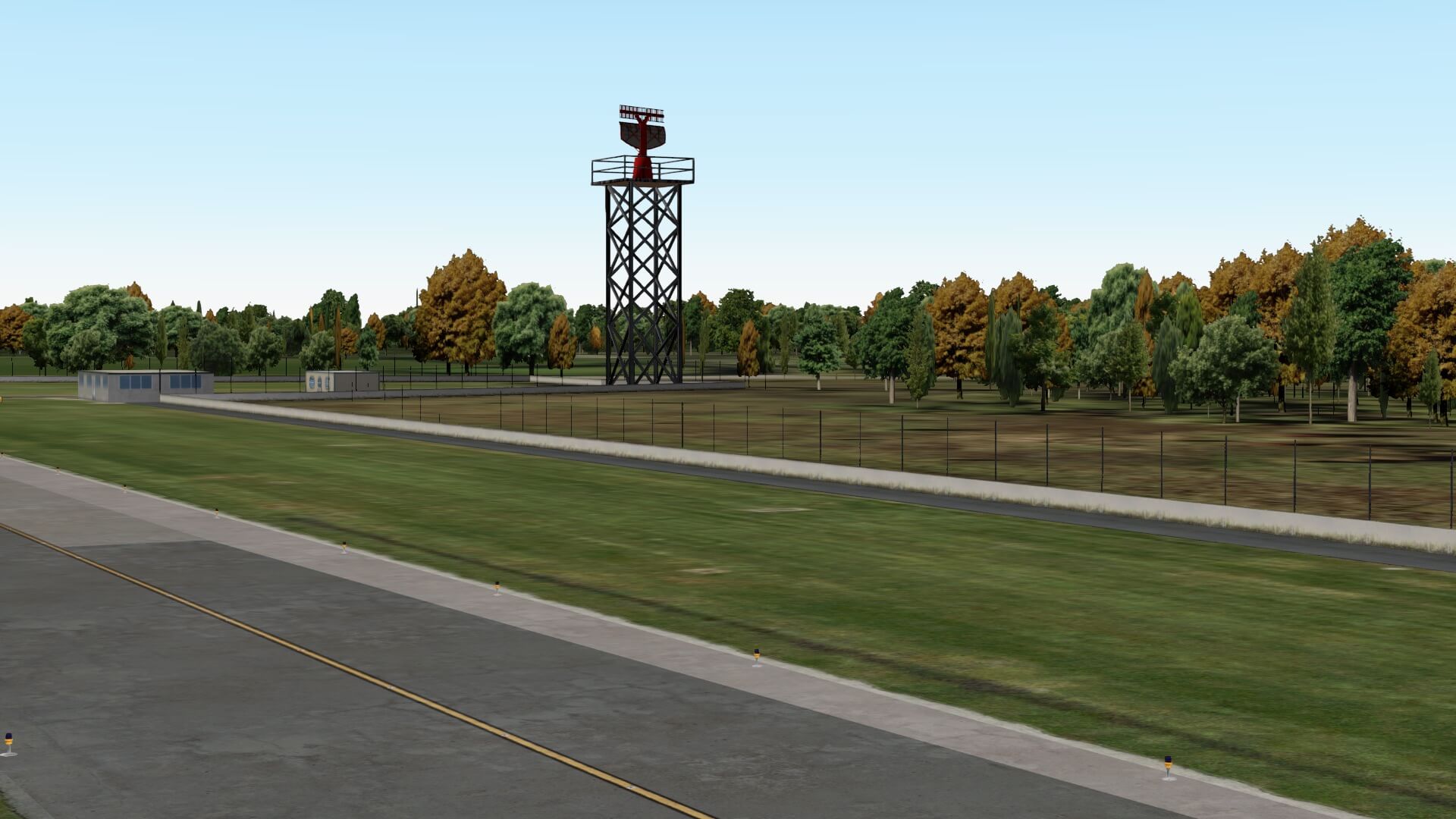 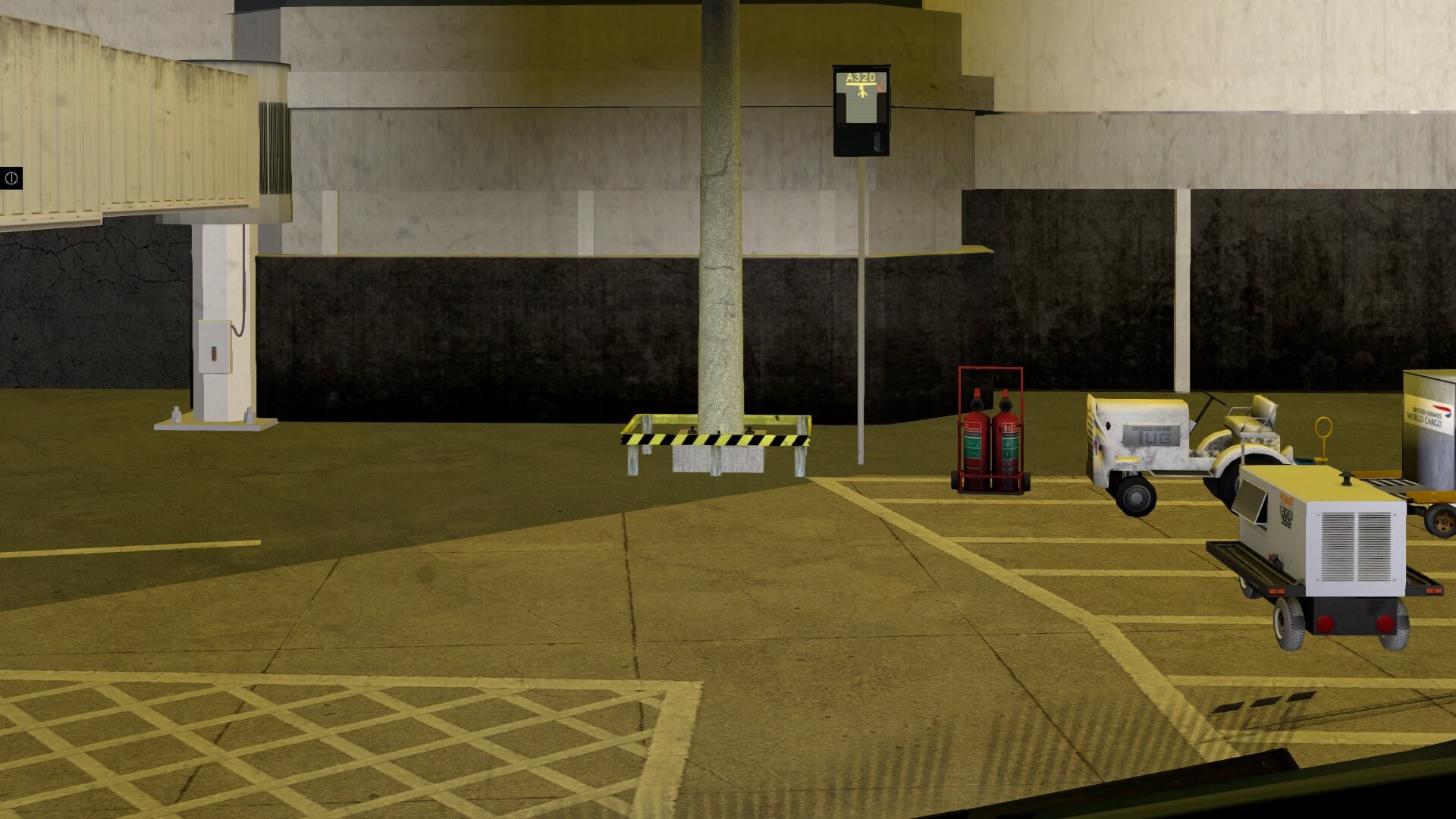 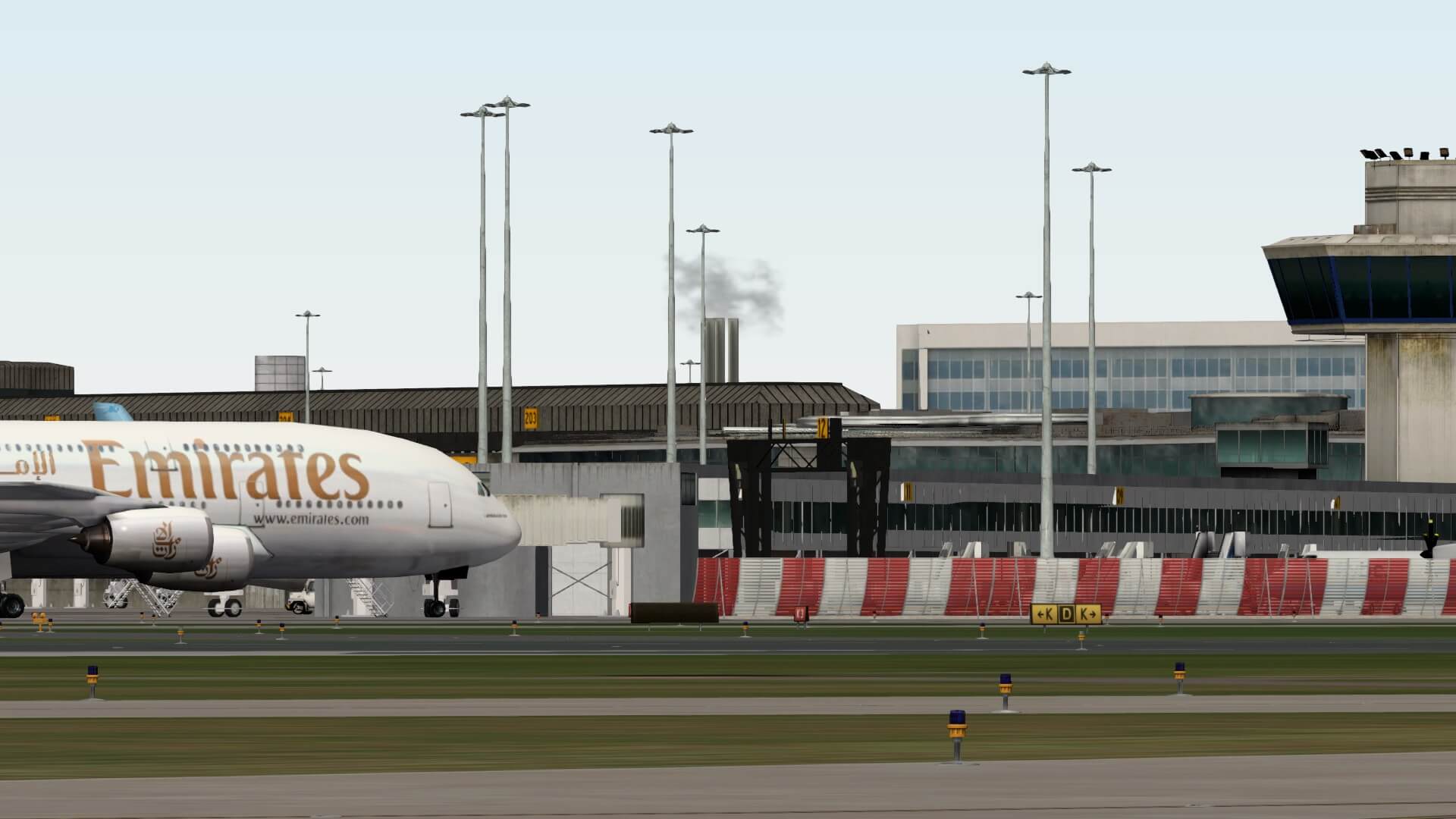 How does it look at night?

Well, if you’re new to X-Plane 10, (I just started with X-Plane 10 in January this year), you’ll notice how well X-Plane 10 and HDR lighting are compared to FSX. Aircraft landing lights illuminate the scenery way better than FSX, or dare I say it Prepar3D?

It really does have its strengths at dawn/dusk and nighttime flying in X-Plane is a pleasure and joy in this regard. The airport lighting really shines (excuse the pun) and is more natural and stunning than FSX could ever deliver, and HDR lighting is essential in order to get the best out of the newer sceneries and aircraft now coming on the market.

The result? Well have a look at the screenshots below. 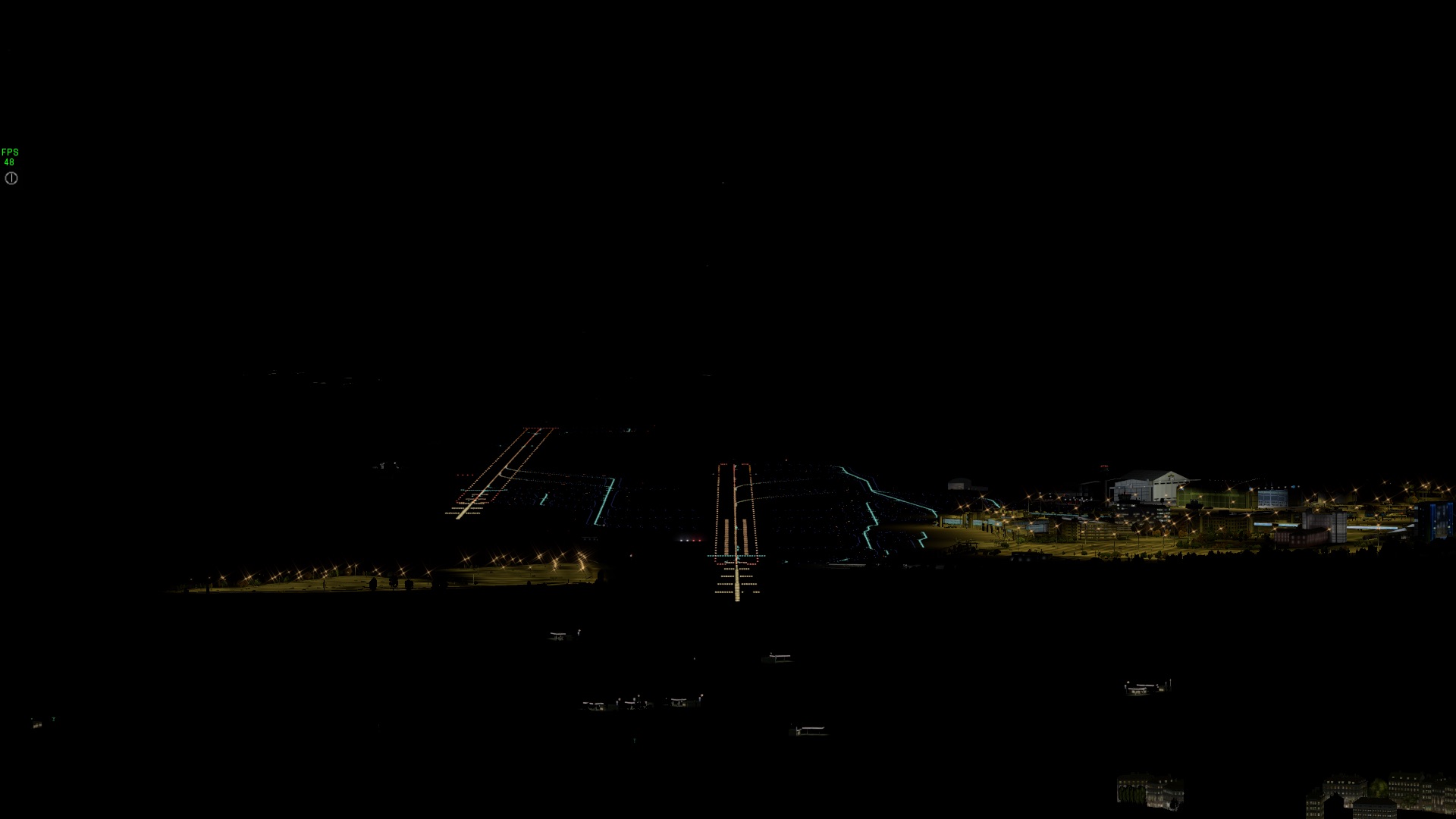 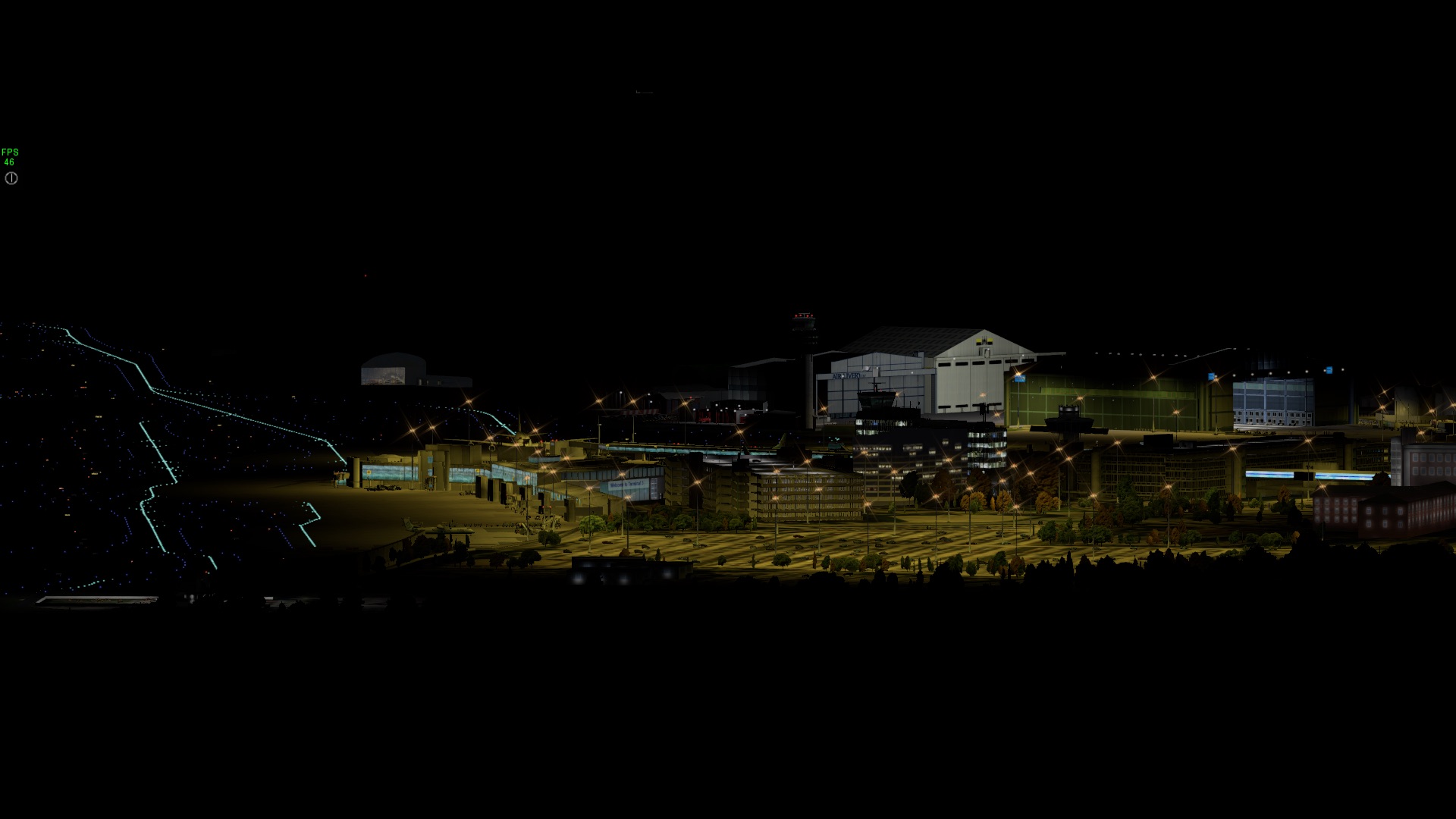 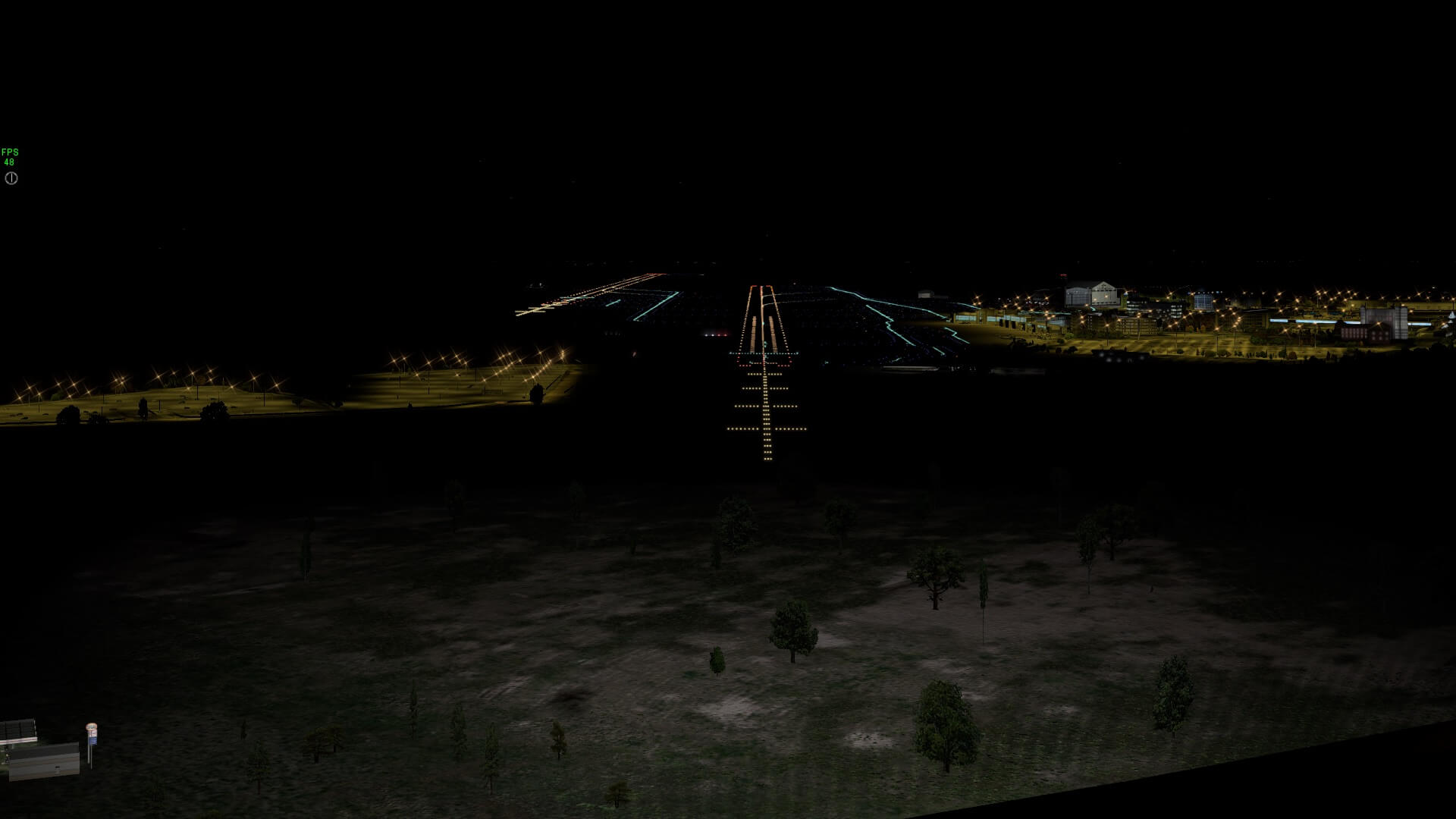 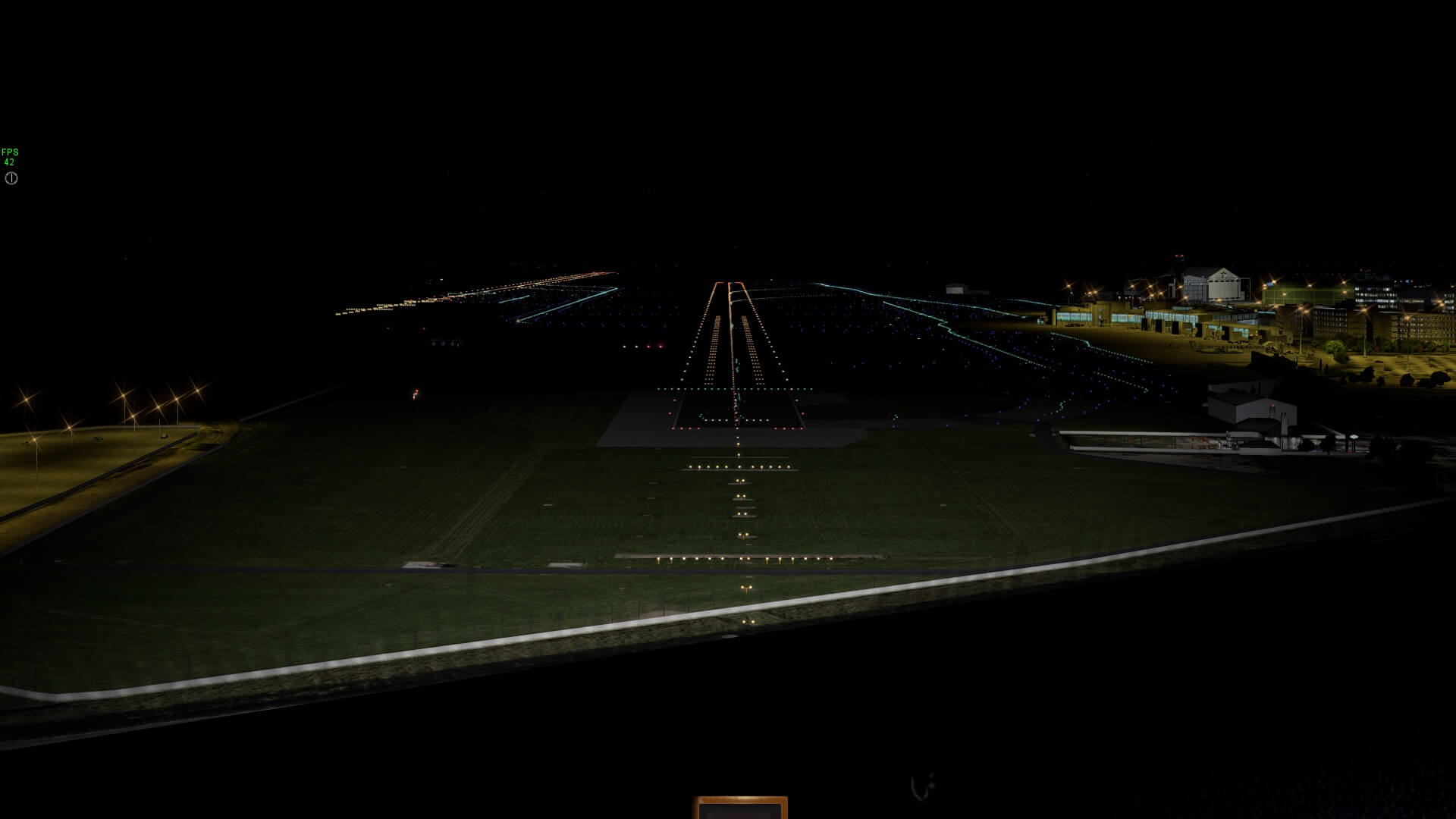 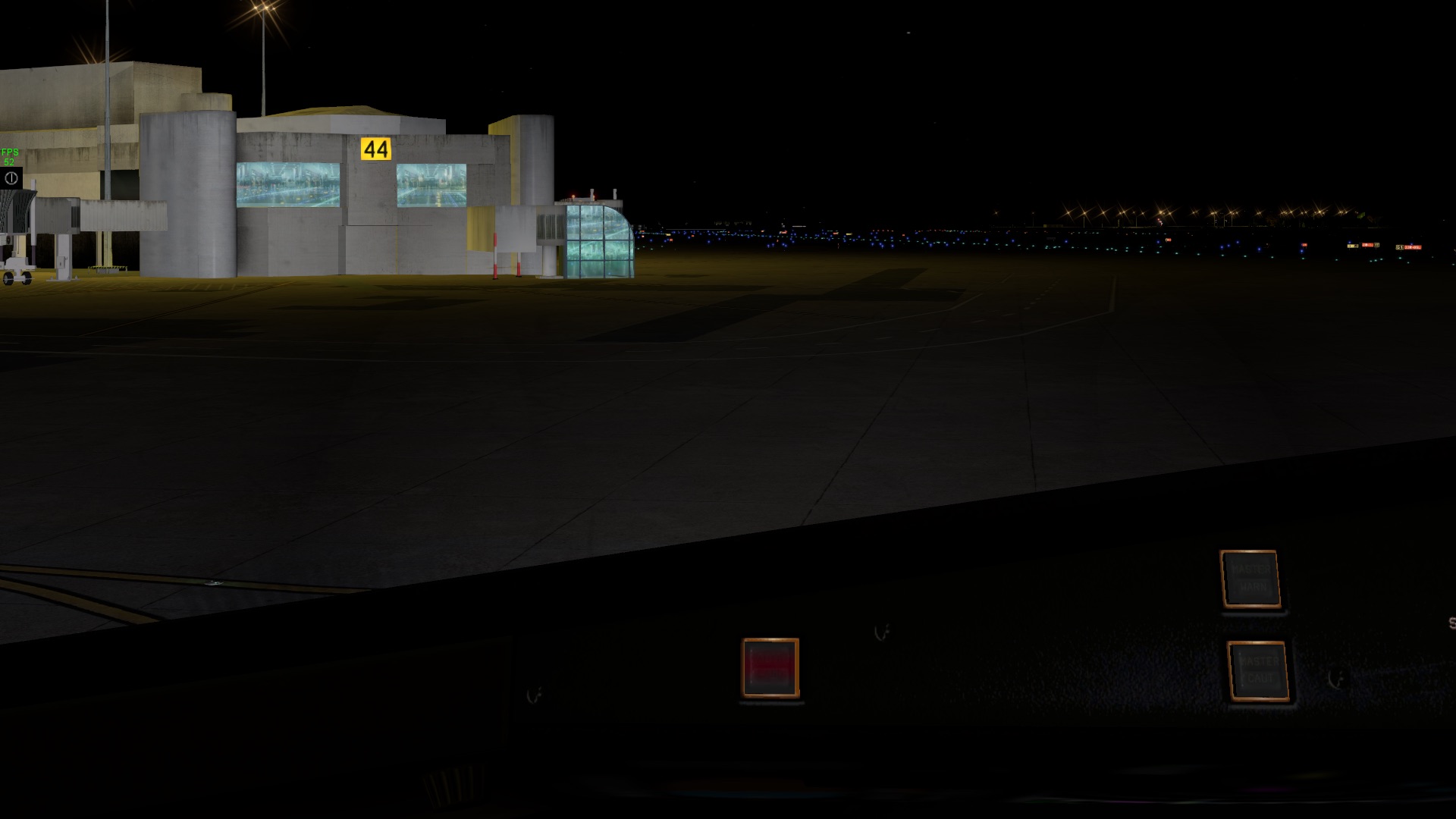 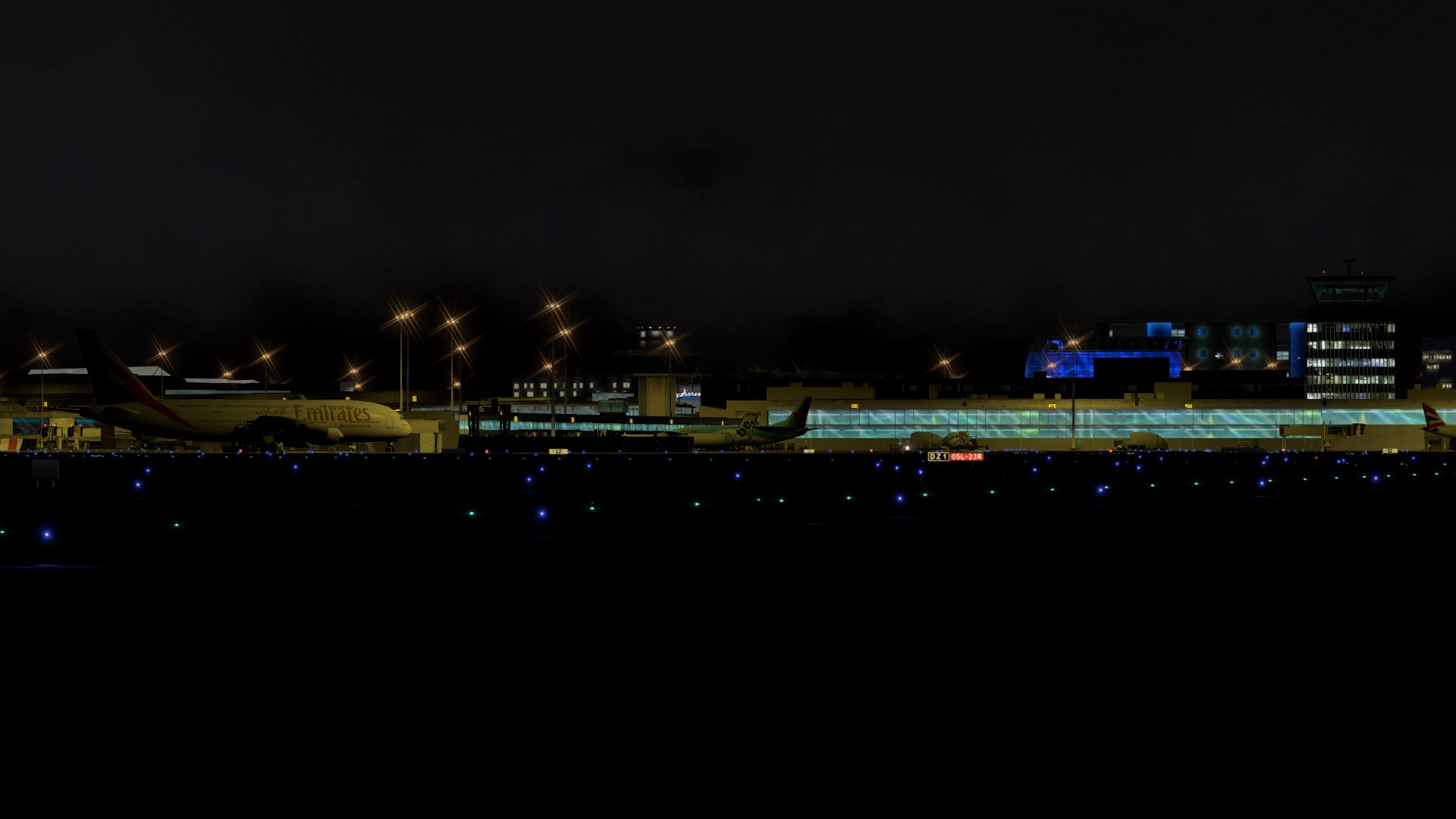 The two runways and taxiways are very nicely done along with the PAPI and ILS lighting the really do have a nice touch, and it’s a pleasure to land on them. Unlike some sceneries, there is no requirement to turn of the contour setting in X-Plane so it looks much more natural and pleasing to the eye than the flattened runways do. This really does make a difference and puts a nice finishing touch if the developers manage to pull this off.

On my (quite modest by today’s standards) system, I was quite happy with the performance, even taking into account the HDR being active on my machine. I was getting quite decent framerates at this airport and no stuttering was evident even when using such aircraft as the JarDesign A320 and A330 which can be quite demanding on frames.

Most of my testing as you can see from the screenshots, was done with the A320 as it offered the most flexibility for the routes I was testing with. Even the static aircraft showed no noticeable drop in frames and I was using Skymax Pro throughout the review as it adds nice cloud shadows and atmospherics to the sim.

Overall, I found this a very interesting and compact airport, with so much to see and so many features included. Although not a large airport by international standards, it’s still a great addition to the X-Plane family and well worth the purchase. It’s also excellent value for money when you take into account the details and features it offers.

When you also take into account how versatile this airport is, which handles both short and long-haul routes, there is no-one who will not manage to get some good use out of Aerosoft Airport Manchester. From short-hops from Dublin or London to long-haul from Dubai or Singapore, time to dust off the A380 and fly!

Is it a must-buy?
I would definitely say yes!

More information can be found at Aerosoft dedicated web page.