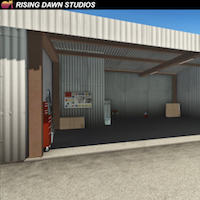 We’re pleased to offer you some screenshots and background information of KHAF or better known as Half Moon Bay Airport (Eddie Andreini Field). The airport comes from Rising Dawn Studios, and is created by Peter Suranyi.

According to Peter “Half Moon Bay has a special significance to me, and I wanted to make this airport since a long time. The significance comes from the fact that this was the default start ing airport for the (in my opinion) most forward looking home flight simulator ever, Flight Unlimited II by the now defunct Looking Glass Studios.

The main highlights of the airport:

Peter continues “This beautiful area is just 18 miles (30 km) from downtown San Francisco, and 25 miles (40 kilometers) from Silicon Valley. San Francisco International Airport with its large controlled airspace is just around the corner, 10 miles away. Following are some
interesting areas around the airport:

But there’s so much more to explore. More information and buying details can be found at the dedicated X-Plane.Org webpage.