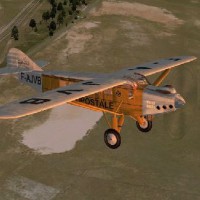 Like to fly an old-fashioned aircraft? Then this is your chance. XPFR (Association of French Speaking Creators) is pleased to announce the freeware release of an historical aircraft; the Latécoère 28.

According to XPFR “The Latécoère 28 (aka Laté 28) is the aircraft from the Latécoère firm which Mermoz used to cross the South Atlantic ocean for the first time on May 12, 1930. It was made famous by its use in postal links between France and South America in the service of Aeropostale, in the 1930s. It was a single-engine airplane, high-wing capable of carrying 8 passengers. It was built in 50 copies from 1927 to 1932 and its original Renault engine was replaced by a Hispano-Suiza more powerful.

The modelled aircraft comes with a 3D cockpit and a fully modeled old-fashioned cabin. Curious? See our exclusive screenshots at ASN. It is made compatible with X-plane 10.20 and tested with 10.30 too. Check it out at the dedicated XPFR web page.